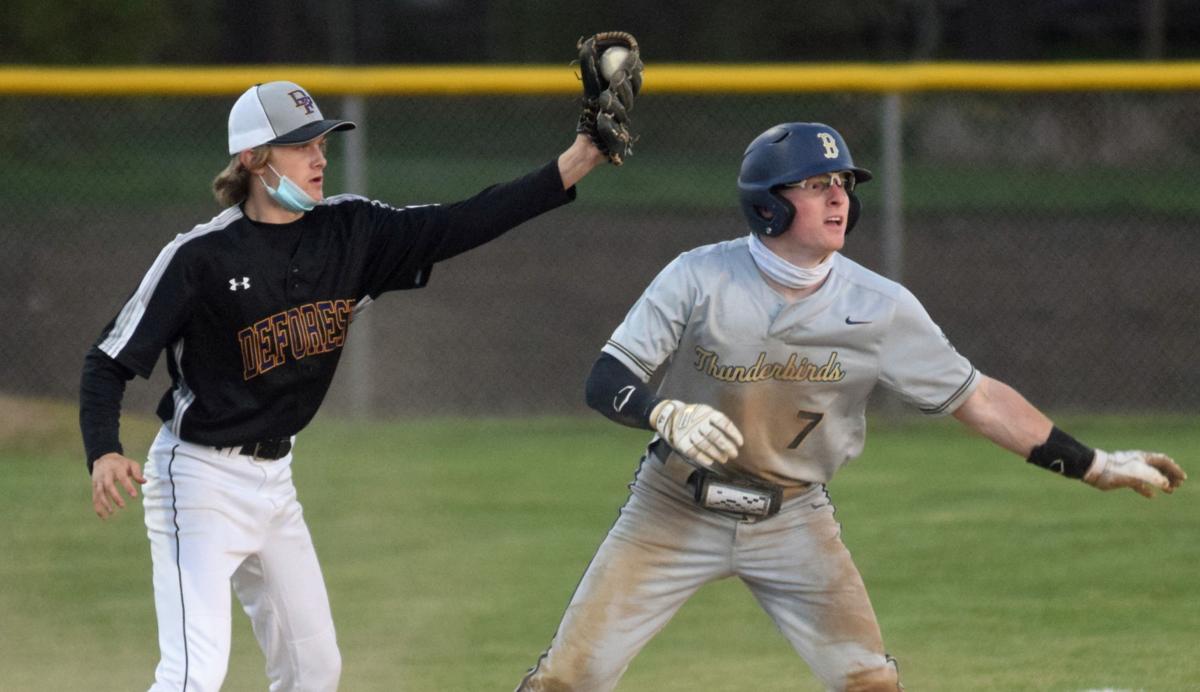 Baraboo junior Levi Kline and DeForest sophomore Parker Holmes look to the field umpire for a call after a steal attempt at third base during Thursday's Badger North Conference game at DeForest Area High School. 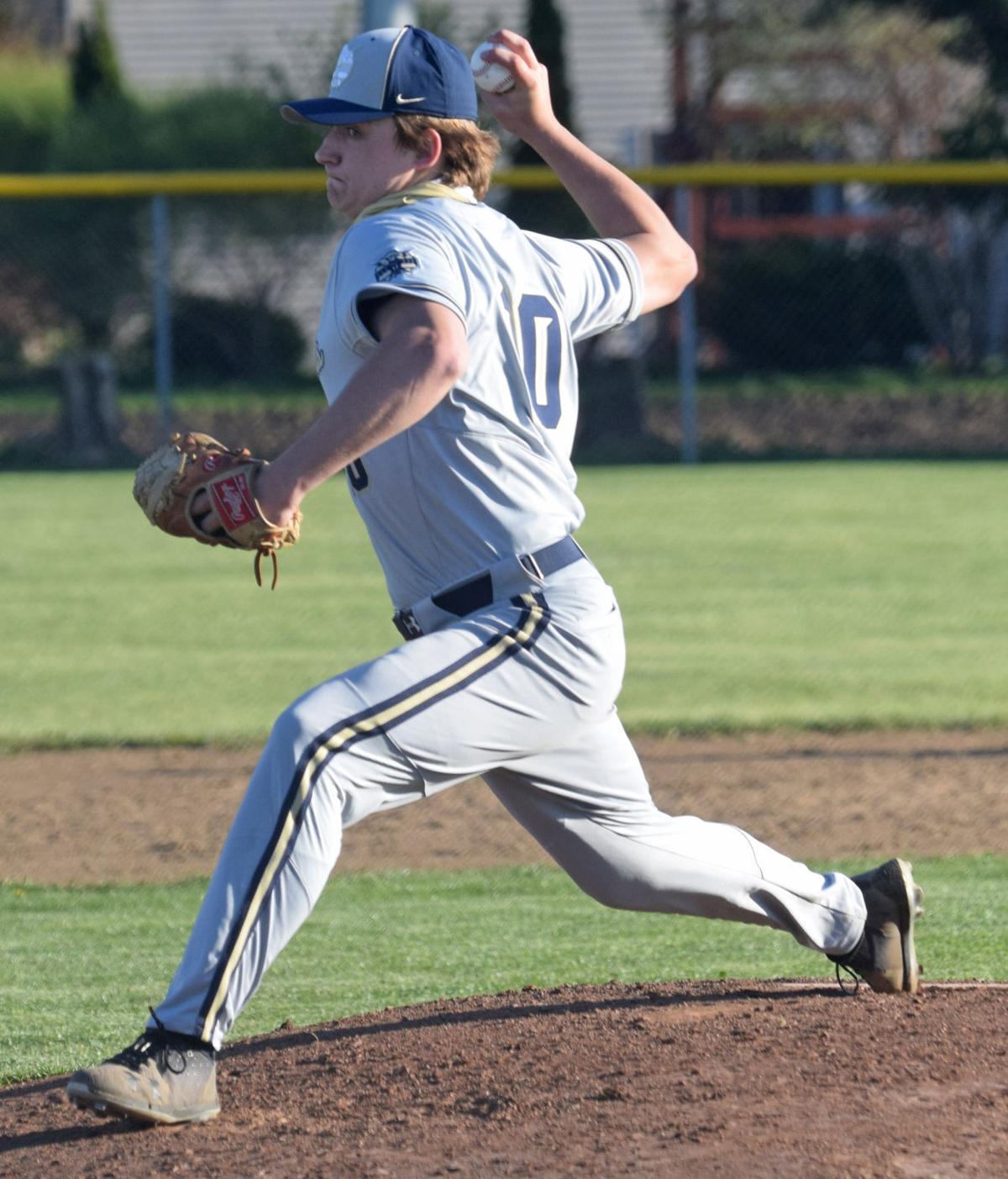 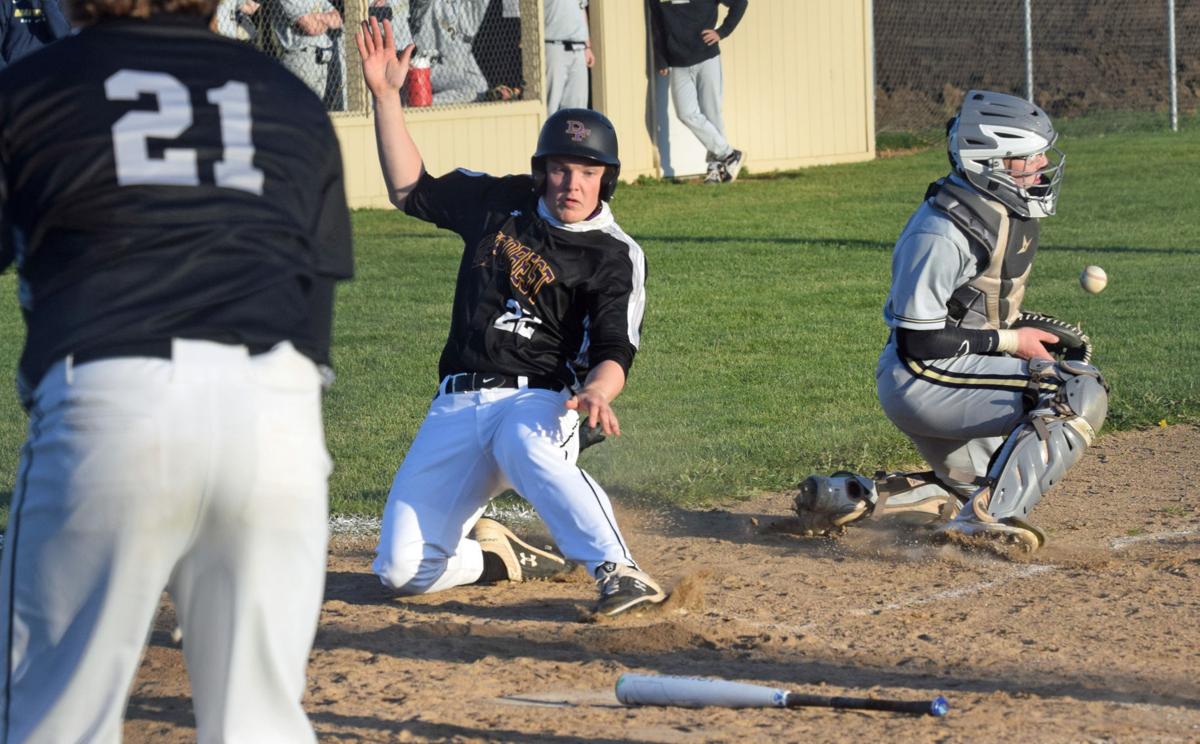 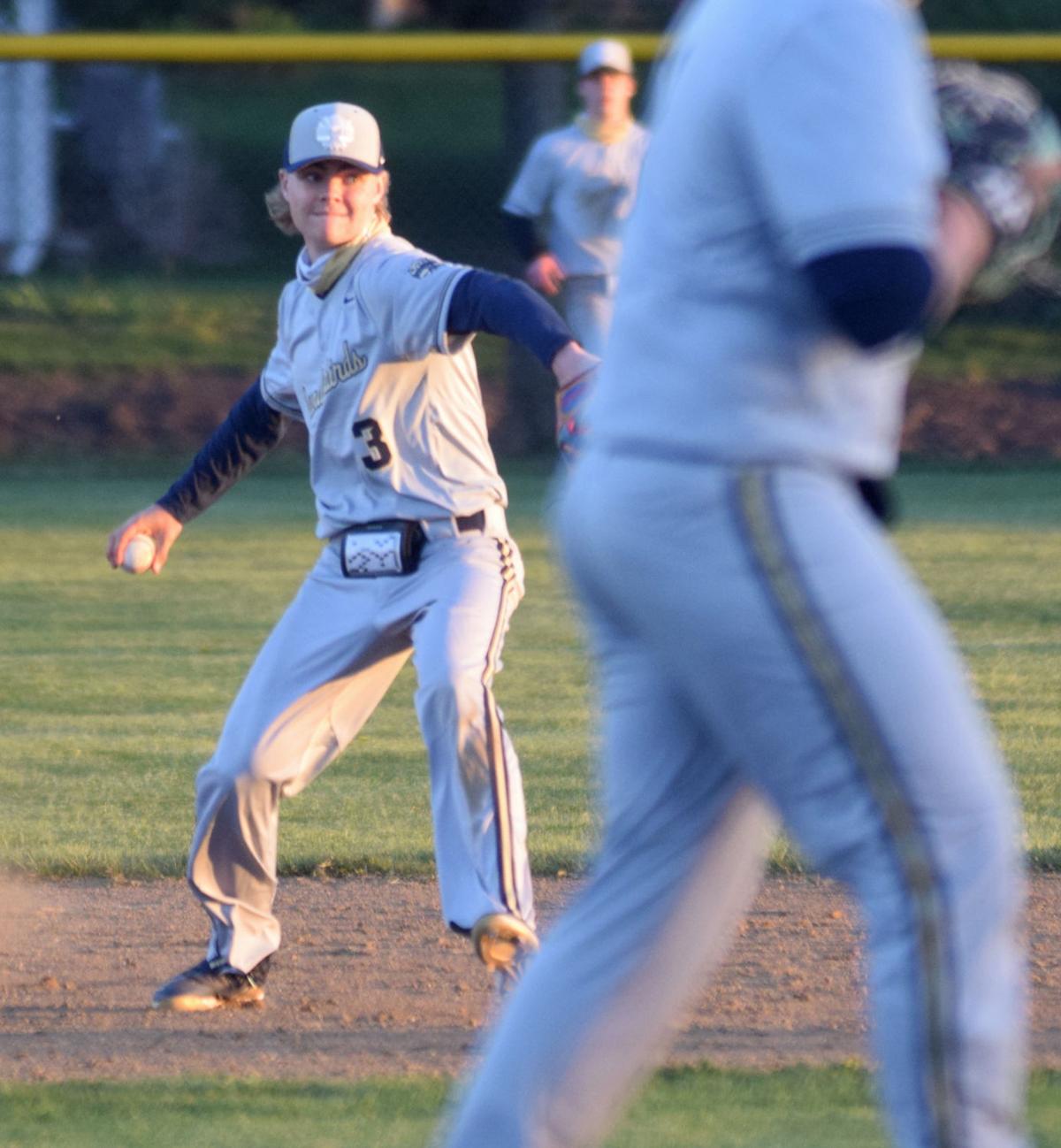 DEFOREST — Self-inflicted mistakes, if they pile up, can really become too much to shoulder.

Too many early miscues created too heavy a load for the Baraboo baseball team to deal with on Thursday. The Thunderbirds committed three errors and gave up three unearned runs en route to a 12-2 loss to DeForest in a Badger North Conference game at DeForest Area High School.

Junior Josh Jansen struck out six in 4 1/3 innings of work and delivered a game-ending two-run home run as the Norskies salvaged a regular-season split with the T-Birds. Baraboo trailed 8-0 after the first two innings and couldn’t rally for the second straight game against DeForest.

“I think we hurt ourselves. That being said, you can’t take anything away from DeForest. They’re a very well-coached team, a very talented team, and they came out hungry after what we were able to do on Tuesday,” Baraboo coach Dan Pavlue said.

That hunger culminated in a four-run bottom of the fifth inning in which the Norskies shut the door for good after the T-Birds trimmed their deficit to 8-2. After a pair of walks and a single loaded the bases with one out, a wild pitch and throwing error plated two runs to extend the lead back to 10-2.

The Norskies (1-1, 1-1 Badger North) then finished things off as Jansen launched a blast over the wall in right center for a 12-2 victory. DeForest’s strong finish came after the T-Birds (1-1, 1-1) broke through in the top half of what proved to be the final frame.

After Baraboo was held without a hit through four innings, sophomore Hudson Turner broke the dry spell with a soft liner to center with one out. Turner advanced to second on a late throw to third attempting to cut down courtesy runner Dawson Newman, who came in after senior Brendan Fitzpatrick drew a lead-off walk.

Junior Levi Kline stepped to the plate and laced a two-run double down the third-base line to claw within 8-2. The momentum was quickly snuffed out as Kline was caught stealing before Brogan Ludtke grounded out to end the threat.

“I’ll be the first to say I’m very aggressive on the base paths, and that’s what I try to instill in our players,” Pavlue said. “Obviously not the right situation to do that, but that’s a conversation we’ll have to clean up in the future, but I’ll never fault a kid for trying to make something happen.”

The T-Birds struggled to make things happen early, managing just two runners in scoring position the first three innings. It didn’t help that Baraboo surrendered two quick runs in the home half of the first. After a lead-off hit by pitch, DeForest’s Brogan Hicks laced a double down the left field line to put a pair in scoring position.

Baraboo didn’t make the Norskies (1-1, 1-1) work much to push them across, as T-Birds starting pitcher Logan Hammermeister committed a pair of balks to score Hicks and Justin Hausser. Pavlue went to his bench early, and reliever Kalob Schadde was able to prevent the Norskies from adding to the lead in the opening stanza.

“That’s obviously not the plan, but the thing I’ll tell Logan on the bus ride home is ‘Guess what? You’re going to be in that same situation again. It just wasn’t your day, we’ll learn from it and move on,’” Pavlue said.

“I think there’s maybe some nerves to play in that and just partly wasn’t his day either,” he added of Hammermeister. “He just wasn’t at his best on the mound, because I know certainly from what he was able to do out there, there’s much better than that.”

The Norskies kept knocking, plating six more runs in the second. Gabe Kennedy capped things off with a two-run single, but only after a trio of Baraboo slipups. Schadde walked in a run for a 3-0 lead, a fielding error helped plate two more and a catcher’s interference call pushed the lead to 6-0 before the two-run hit by Kennedy, who went 2-for-3.

“It was nice to get something going and kind of felt like we were on the cusp of really chipping away at the lead and getting something going offensively, but that’s baseball,” Pavlue said. “Kind of the message to the team today was ‘You have to keep fighting and control what you can control,’ and I think we’re going to do a much better job of that next time.”

The T-Birds eventually started to heat up at the plate, but Pavlue knows that those adjustments need to happen sooner. Baraboo is faced with an early fork in the road after splitting the first two games of the season against a perennial contender in the Badger North.

“I think it’s in the hands of the kids now and we told them in our meeting just now, ‘We’re at a crossroads. You can choose to hold on to what we did on Tuesday, and that’s compete and ultimately beat a team that’s going to be playing deep into June, likely, or we can think about what happened tonight,’” he said. “Hopefully they choose the right path and I know I’ll do everything I can to push them in that direction, too.”

SAUK CITY — After waiting 700 days to return to the field, the Sauk Prairie High School baseball had no trouble waiting seven innings for thei…

The last time the Baraboo baseball program’s 13-player Class of 2021 took the field for a high school game, they were the young guns. That gro…

Tom Ginther pitched the University of Wisconsin-Eau Claire baseball team to its first win of the season on Friday.

When Dan Pavlue is coaching the Baraboo High School baseball team, he has the long game in mind.

Baraboo junior Levi Kline and DeForest sophomore Parker Holmes look to the field umpire for a call after a steal attempt at third base during Thursday's Badger North Conference game at DeForest Area High School.