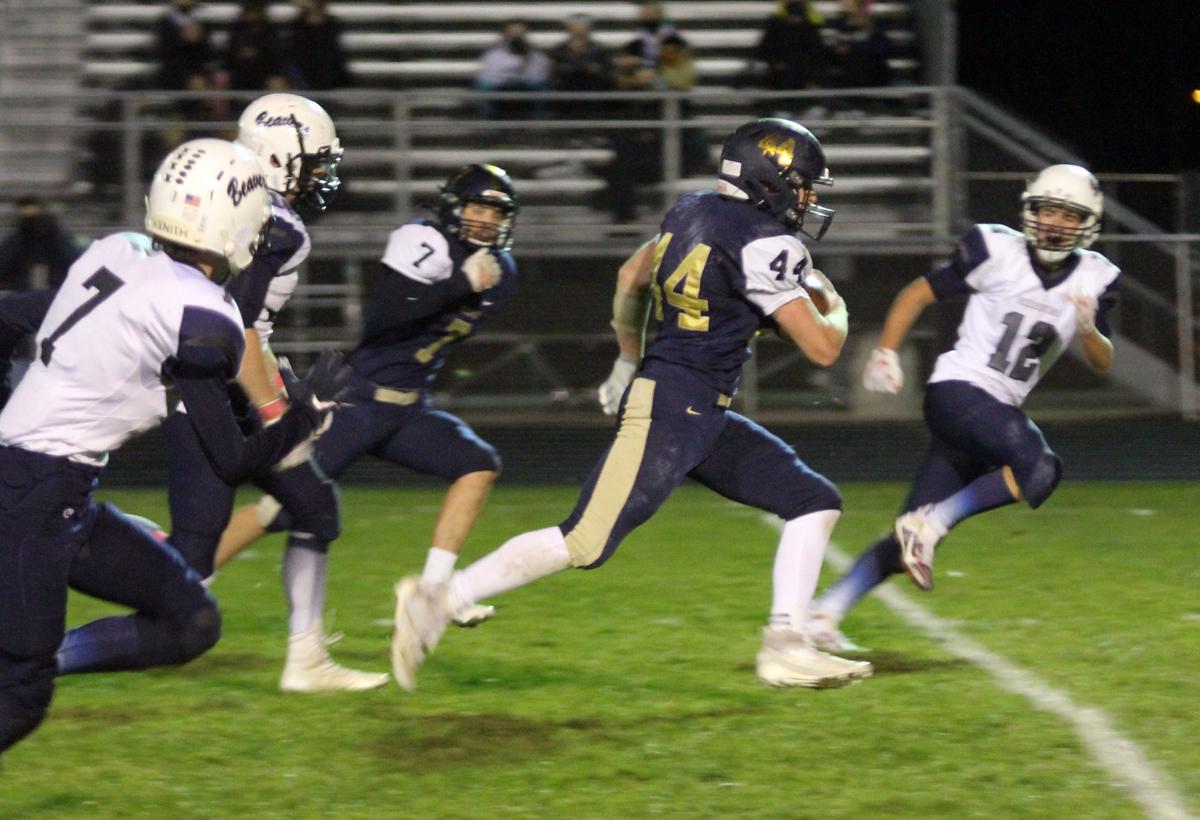 Baraboo's Owen Nachtigal runs for a 43-yard touchdown during the first half of Friday's home win over Reedsburg. 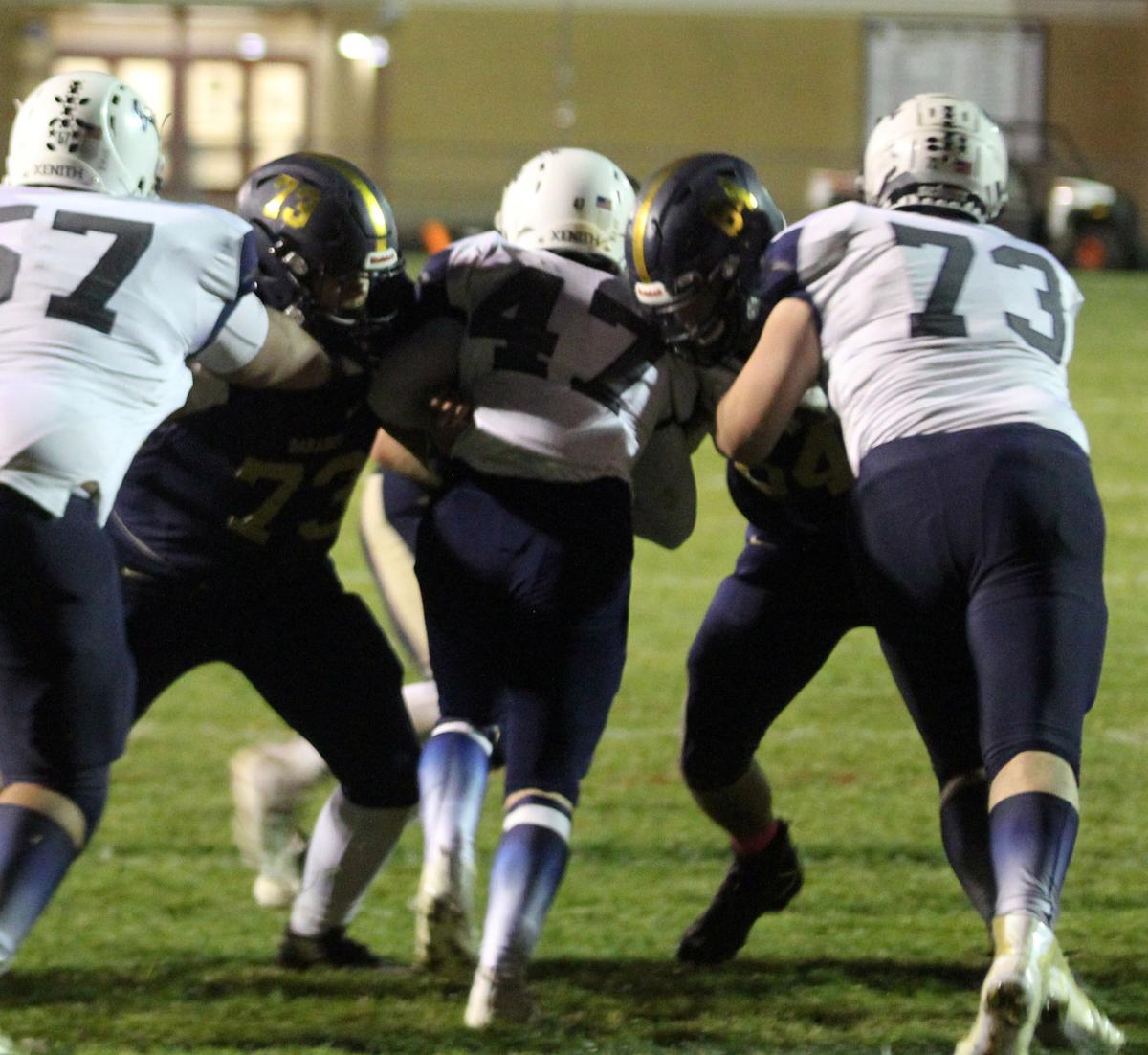 After 133 meetings, Baraboo is leading the longest-running series in the history of Wisconsin prep football.

The Thunderbirds can lay claim to that after Friday’s 24-0 home win over Reedsburg gave them a 64-63-6 lead in the all-time series for the Old River Jug, which dates back to 1900.

“We played well,” Baraboo head coach Steve Turkington said, noting his team didn’t play a completely clean game. “I think it’s the rivalry that kind of creates a little more anxiousness during the game. I was nervous all day, and I know other coaches were, so I’m sure the kids are. I think that’s why it’s such a good rivalry, because it’s so close and kids will make mistakes because they’re playing for something bigger than a normal game. And Reedsburg’s a good team, too, so they forced some errors. It wasn’t a complete game, but it was good.”

The first touchdown of the night came on Baraboo’s second possession. The T-Birds took over near midfield with 3 minutes, 58 seconds remaining in the first quarter. After a holding penalty backed them into a second-and-20, the T-Birds worked quickly. Quarterback Luna Larson ran for 9 yards, then Owen Nachtigal ripped off a 43-yard touchdown run on third down to give Baraboo a 6-0 lead with 1:39 to play in the first quarter.

Nachtigal and Larson ran for 155 yards and 90 yards, respectively, behind an offensive line that’s been clicking on all cylinders.

“They’ve been great,” Turkington said after the line paved the way for 265 rushing yards on 35 carries. “A lot of times they don’t get the credit, but we rely on the run a ton, and it’s because of those guys up front. The unique thing about them is they’re such good communicators with each other, and trust each other. When you have that element, you can kind of do anything in the run game. It’s like five best friends working together.”

Reedsburg had decent field position much of the night thanks to Zach Bestor. The senior took his first kick return of the game back to the 41-yard line. But the Beavers couldn’t take advantage, as Quinn Mueller scooped up a fumble and returned it 41 yards for a touchdown to give Baraboo a 12-0 lead with 1:15 to go in the opening quarter.

The Baraboo defense got off the field quickly again on the ensuing possession. Nick Orozco notched a sack as Reedsburg went three-and-out and punted the ball back to the T-Birds.

Baraboo quickly connected for its second explosive play of the night — a 47-yard pass from Larson to Riley Weyh down the left sideline. The T-Birds found some room on the edges against a Reedsburg team that was jamming the middle.

“Reedsburg did such a good job inside defensively, it was tough sledding to get yardage running the ball between the tackles,” Turkington said. “So we were going outside, and then we just started hitting the pass and we got some big plays out of it. Luna does a nice job delivering the ball, and we’ve got some fast receivers that can catch the ball, so it was nice to showcase them tonight.”

The snap after Weyh’s catch was fumbled, sending Larson running backward to recover it. The junior showed off his athleticism, picking it up and taking advantage of a scrambling defense for an 11-yard touchdown run that gave Baraboo an 18-0 advantage with 9:17 remaining in the half.

Reedsburg crossed midfield for the first time on its next possession with Bestor doing almost all of the work, returning the kickoff to the 50 with 9:06 to go. Reedsburg quarterback Bryant Yanke carried it three times to pick up a first down before the Beavers eventually turned it over on downs.

Reedsburg’s next two possessions also entered Baraboo territory, but the T-Birds’ defense stiffened every time. The final play of the half saw Yanke’s pass from the 30-yard line fall incomplete as Baraboo took a 18-0 lead into halftime.

“That’s been kind of our thing this year,” Turkington said of defending a short field. “Our kids came through, we forced some turnovers, we had a defensive score tonight, which we haven’t had yet. That was a huge play. And we almost got another one down here to Jake (Schaefer), he just kind of ran out of gas. I was really his biggest cheerleader on that play, hoping he’d get down there.”

Turkington was referring to Baraboo’s second fumble recovery of the day, when senior defensive lineman Jake Schaefer picked up a mishandled pitch and returned it to the 22-yard line in the third quarter. Larson, Amadeo Tijerina and Kane Mahoney also had sacks in the second half, as Baraboo shutout Reedsburg for the first time since reigning WIAA Division 2 state champion DeForest did it twice last year.

The T-Birds have given up just three touchdowns this season, with all of them coming in last week’s 20-19 home loss to Sussex Hamilton. Baraboo, which is allowing just 5.8 points per game after giving up 32.6 per game in last year’s 2-7 season, has also beaten Sauk Prairie and Madison Edgewood by a combined score of 54-3 this year.

Baraboo’s lone second-half scoring drive started with a 40-yard Larson run down to the 15-year line. Larson found Mueller for a completion to the 9, then ran it in from 4 yards out to give Baraboo a 24-0 lead with 4:57 to go in the third.

Larson completed 5 of 11 passes for 83 yards to go along with 12 rushes for 90 yards and two touchdowns. Weyh caught three passes for a game-high 77 yards.

The Baraboo defense was dominant against the run, holding the Beavers to 49 rushing yards on 40 carries. Miles Raupp had 11 attempts for a team-high 23 yards, while Yanke completed 5-of-11 passes for 102 yards, and Jacob Schickert caught three passes for 61 yards.

Reedsburg will look to end a two-game losing skid when they host Watertown (2-2) next week. The Goslings suffered a 49-24 loss at Lake Mills (3-1) on Friday.

With the biggest rivalry win — and the Old River Jug — back in their hands after last year’s 42-13 loss at Reedsburg, the T-Birds will turn their attention to another rival. Baraboo is set to host Sauk Prairie (0-4), which is coming off a 26-16 loss at Portage (2-2), next week. Baraboo and Sauk Prairie have already met once this season, with the T-Birds claiming a 21-3 road win on Sept. 25.

“They’re going to do some different stuff, I’d imagine, to try to change it up,” Turkington said of playing the same team twice in the COVID-19-altered season. “It’s different. It’s not your normal matchup, but what’s cool about it is you can look at what you did last time and you can make adjustments to it and correct it, and use the film from the last game to do that.”

Photos of the prep football game between Baraboo and Reedsburg on Friday, Oct. 16, 2020, at Baraboo High School. The host Thunderbirds scored …

Baraboo's Owen Nachtigal runs for a 43-yard touchdown during the first half of Friday's home win over Reedsburg.