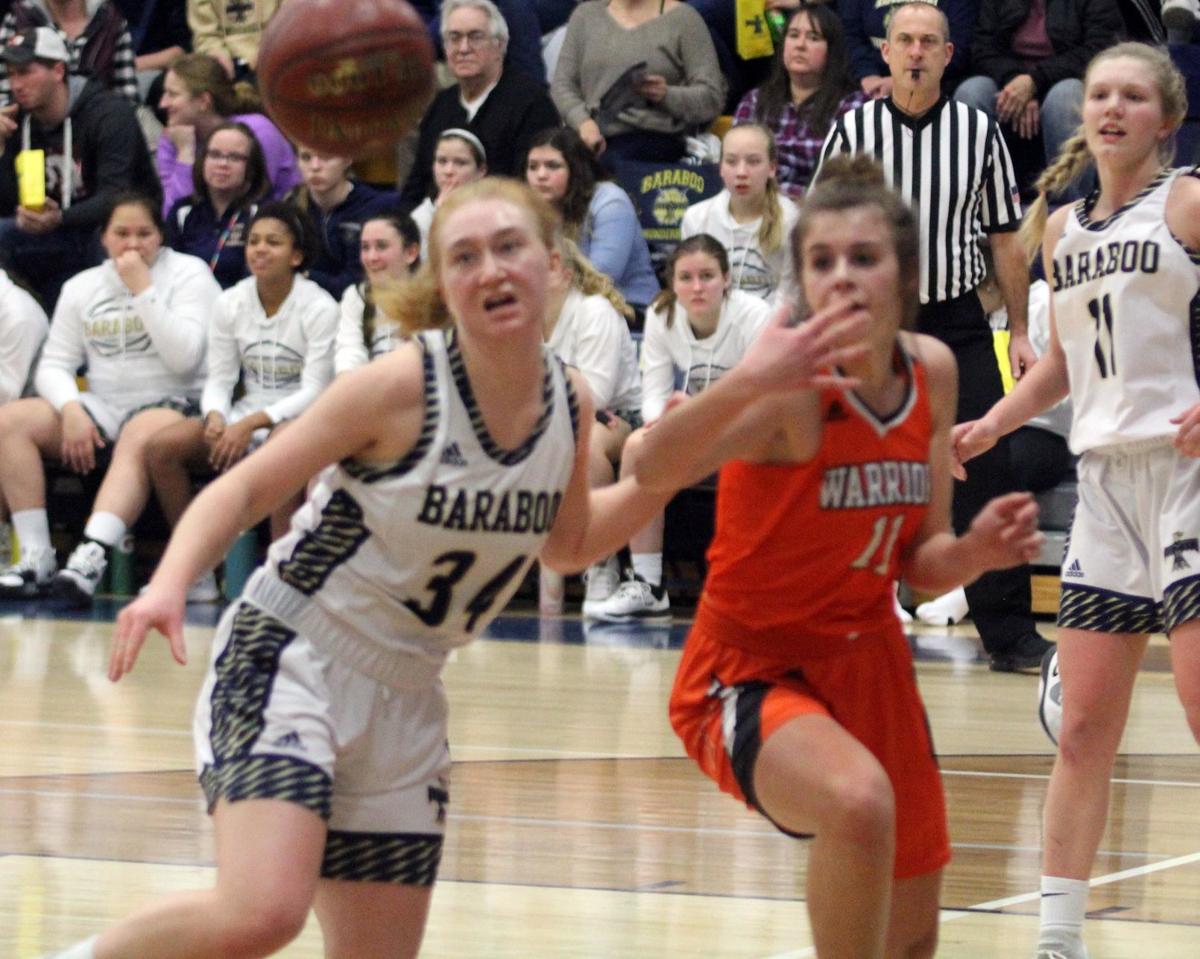 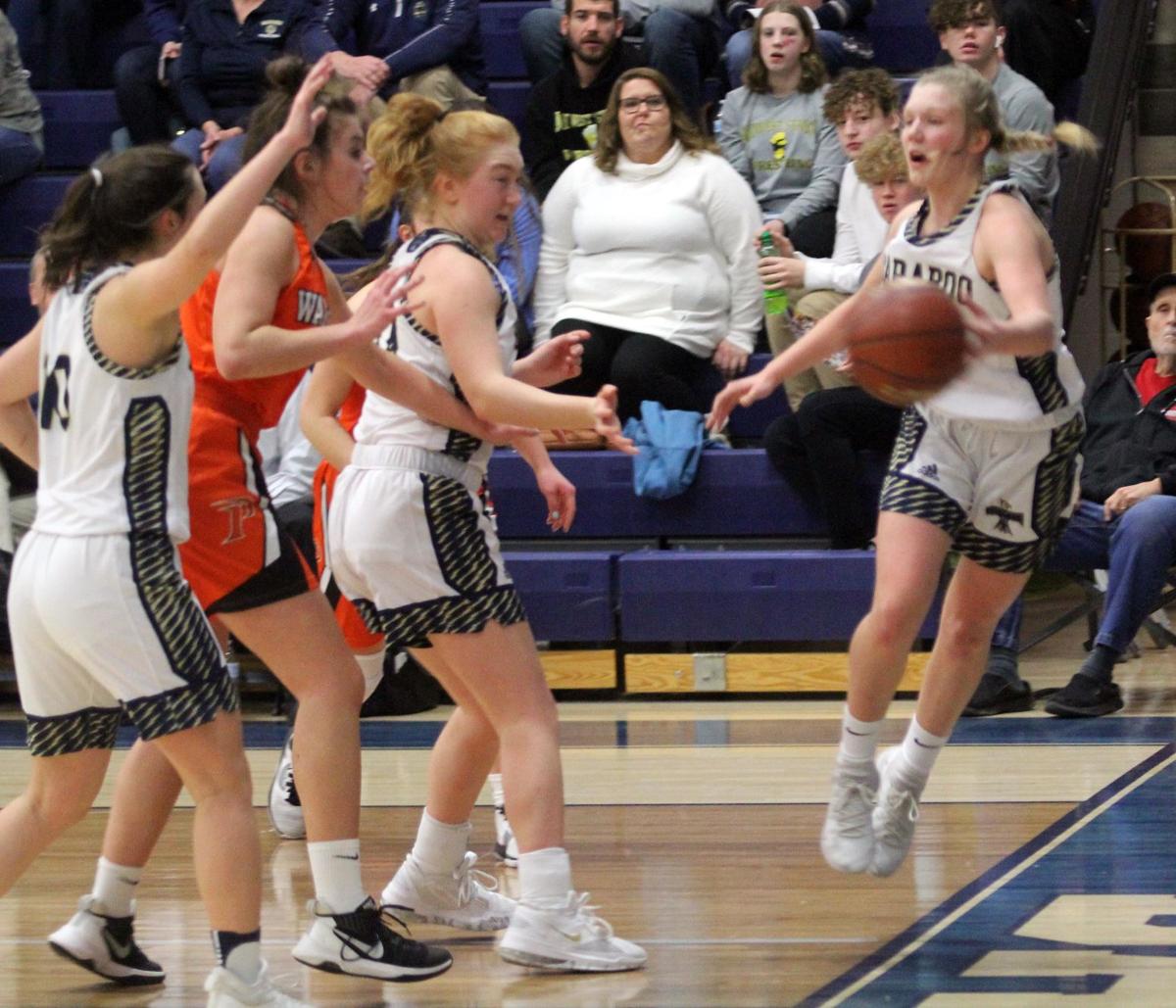 Baraboo's Taylor Pfaff saves the ball from going out of bounds during a Jan. 3 home game against Portage. 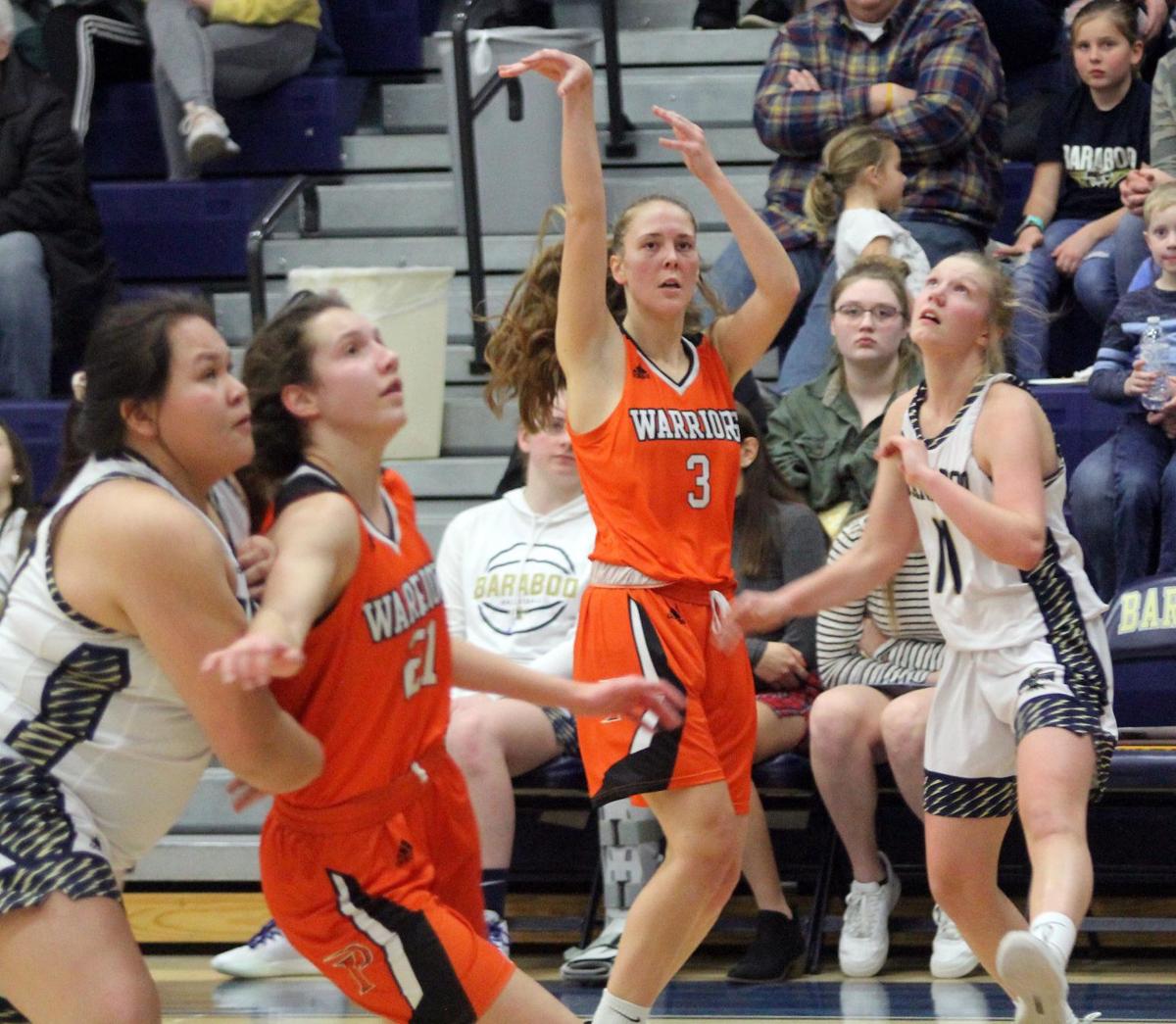 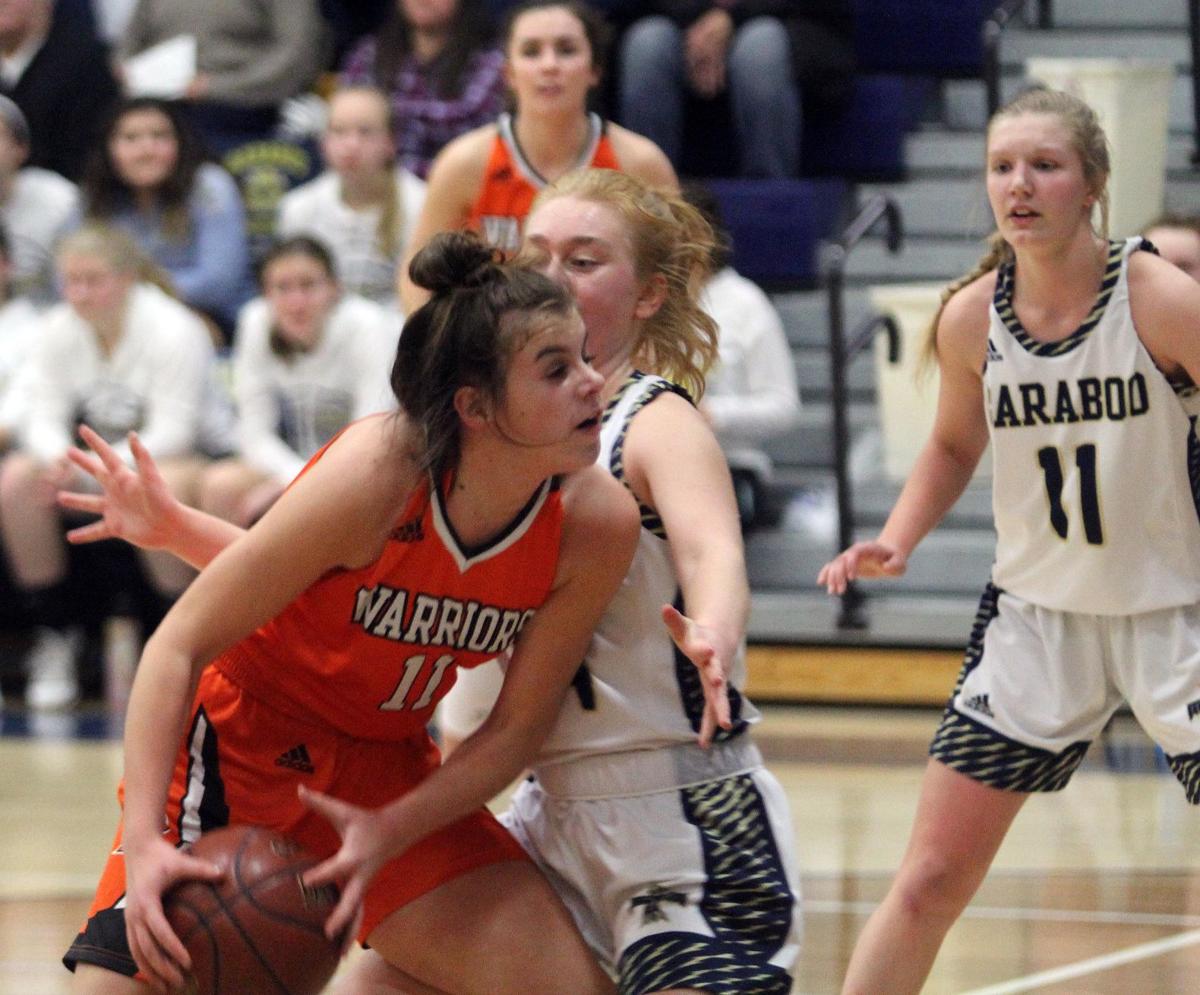 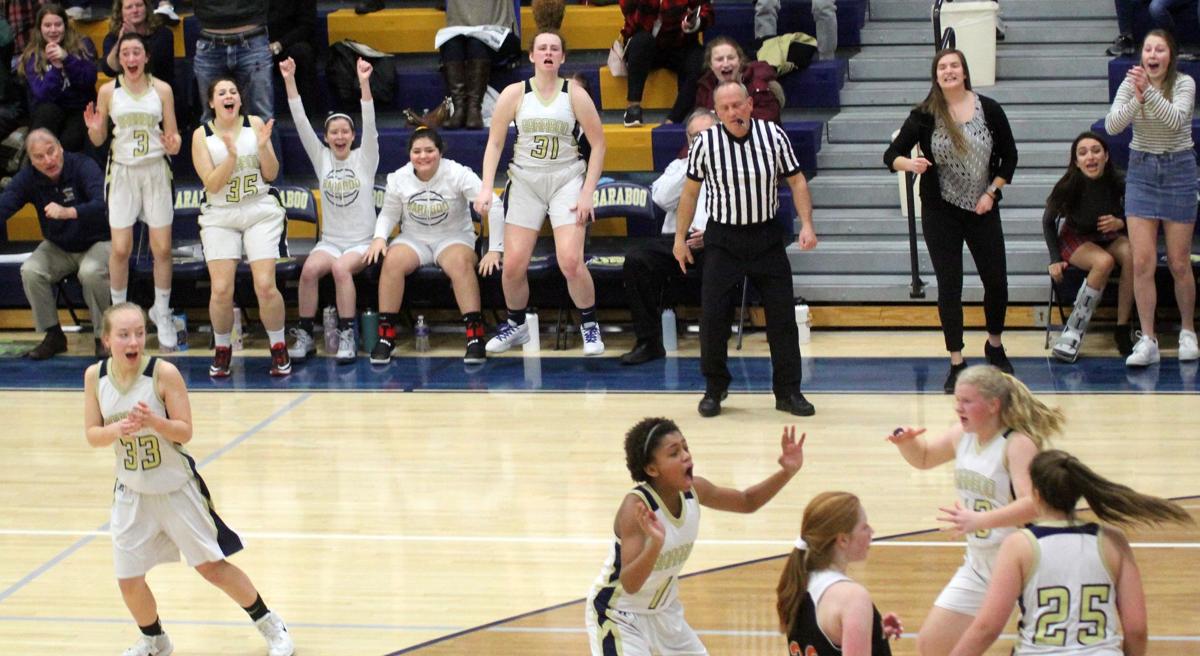 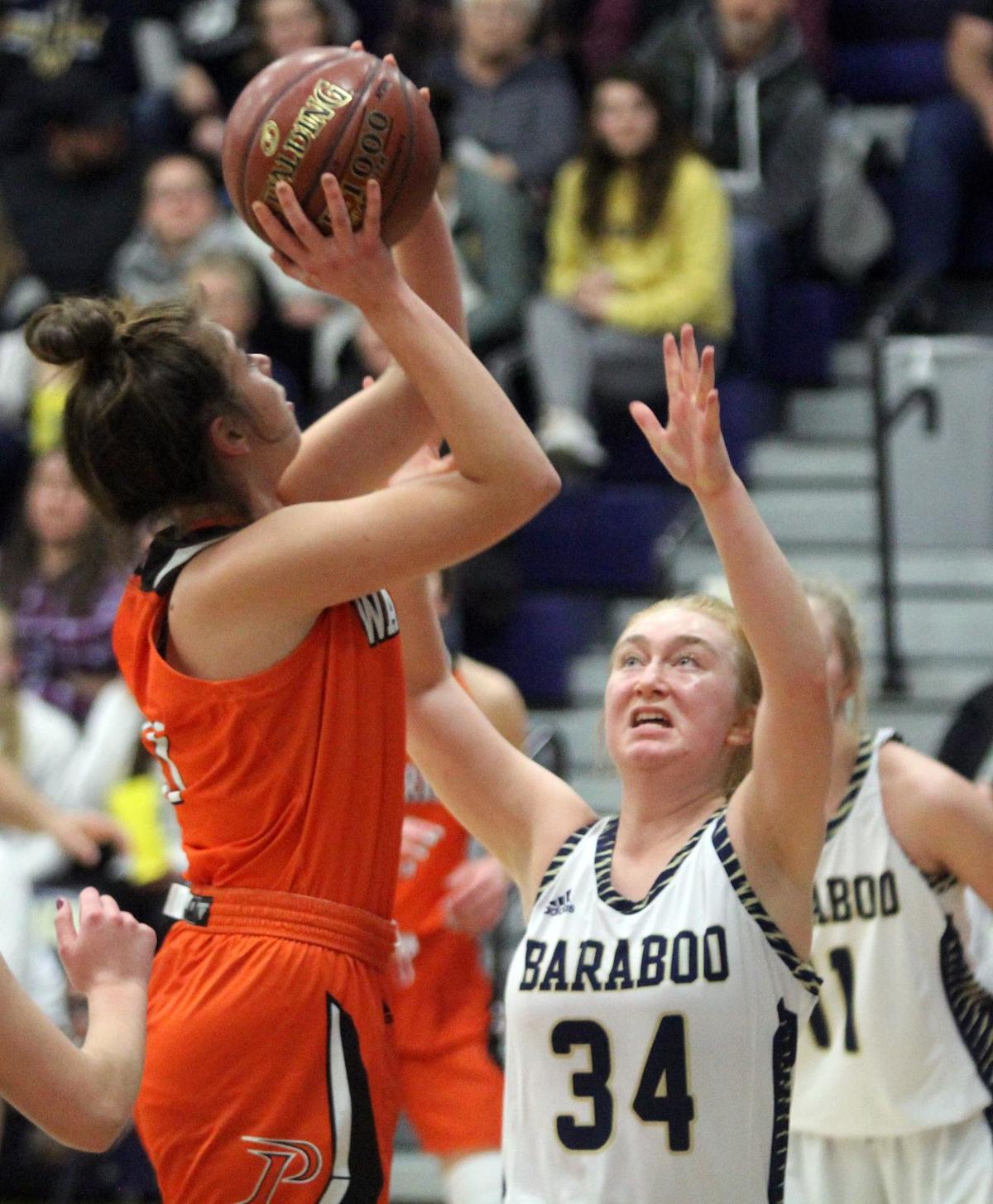 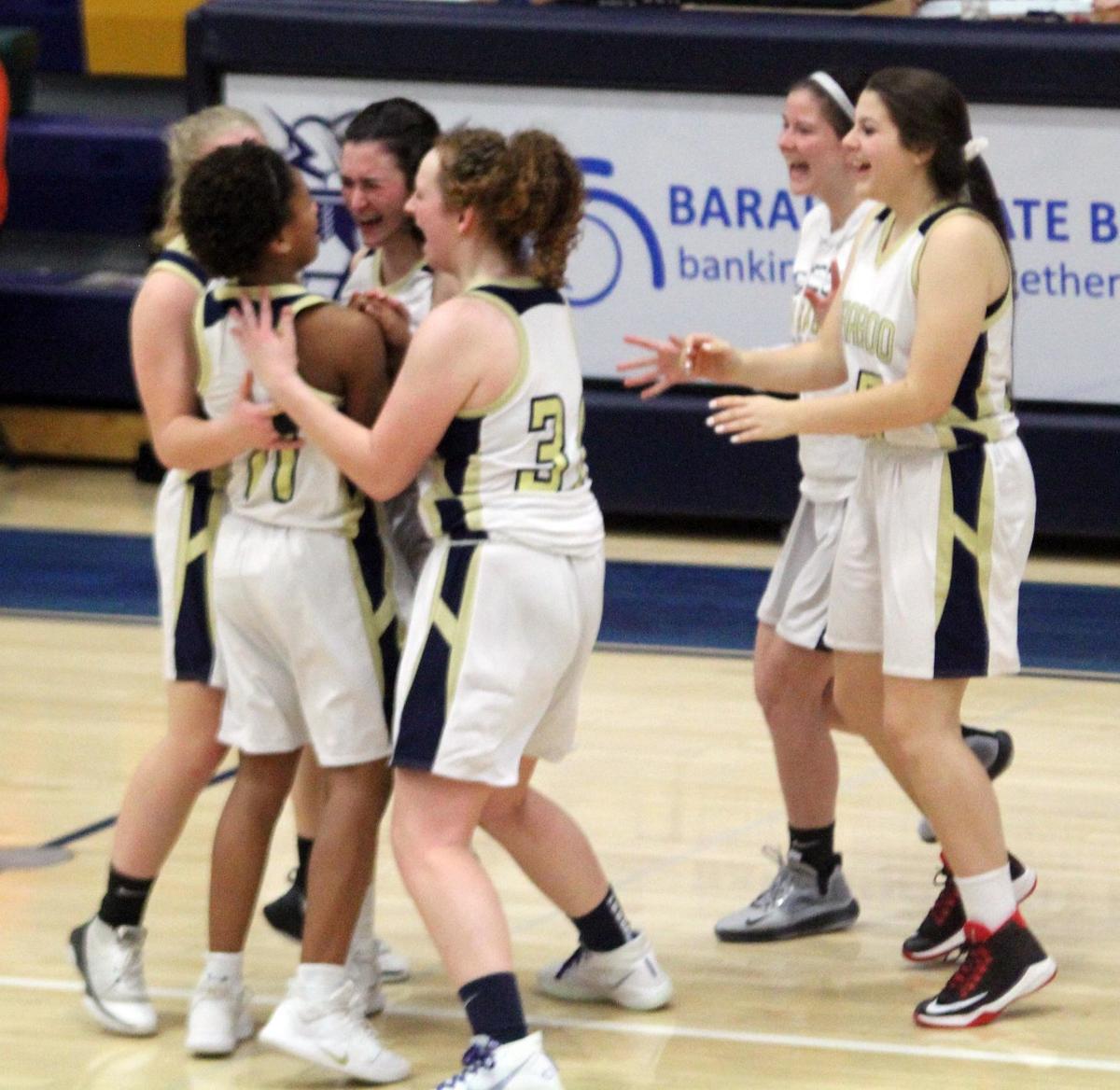 The Badger North Conference programs played a pair of one-point overtime games, with Baraboo winning the junior varsity matchup before Portage came from behind to earn a 48-47 win in the varsity game at Baraboo High School.

“This was a really important win for us,” Portage head coach Jessica Howe said after her teams first Badger North win of the season. “Everybody was so fired up about getting the win that it took them out of just playing the game and having fun together. That’s what you saw to start the second half, we were smiling and felt a little bit more loose.”

The winless Thunderbirds (0-9, 0-5 Badger North) also fought to the wire in their first game of the year that was decided by single digits.

“I think they had fun competing at a high level and being in a close game,” Baraboo coach Michael Behl said. “It always feels good to give yourself a chance to win, and they did that.

“Wanting to win and understanding how to win are two different things. We’re working really hard on getting our kids to execute. They executed fairly well tonight. The next step is figuring out how to win ball games. It’s a good sign, and that’s what we have to move toward.”

The teams were tied at 44 at the end of regulation. Emma Kreuziger gave Portage (2-10, 1-4) the lead for good with 2 minutes, 33 seconds to play in overtime, grabbing an offensive rebound and putting it back to give the Warriors a 47-45 lead. The teams traded turnovers and missed free throws until Kreuziger blocked a 3-point attempt that would have given Baraboo the lead with about 30 seconds remaining.

Makenna Bisch added a free throw with 18.7 seconds remaining, then Klemm got to the rim for a layup that pulled Baraboo within 48-47 with about six seconds remaining. The Warriors inbounded the ball and ran out the clock to win their second straight game.

“I think the turnover battle ended up on our side when we needed it to. And we changed some matchups and got some stops at really key times,” Howe said of what made the difference for her team, which was coming off a 76-30 win over Living Word Lutheran on Dec. 28. “We’re on a run right now... this feels good. The girls enjoy that, so how can we continue it?”

Baraboo also took big steps forward Friday night, hitting the 40-point mark for the first time this season and finding several players who wanted the ball in their hands with the game on the line.

“Do you look for the basketball in those big situations?” Behl said of what he looks for down the stretch. “Do you understand how to get good looks or get a good look for your teammate? Do you want to make that big shot? Do you want to be the one that maybe comes up short as a result? ... I thought I saw some kids that wanted to do that.”

The Baraboo offense was clicking early, as Seneca Funmaker scored inside and Carly Moon made a 3-pointer from the top of the key to give the T-Birds a 22-15 lead with 2:39 remaining in the first half. Taylor Pfaff and Moon added layups in the final two minutes, while Portage’s Cameran Ratz made a pair of free throws with 34.2 remaining to pull the Warriors within 26-20 at halftime.

“We started putting the ball in the hoop,” Behl said. “We had some nice runs, especially in the first half, and then we didn’t give up early in the second half when Portage came out and jumped on us.”

Portage caused havoc with a press that created a number of turnovers to start the second half. The Warriors capitalized on the other end of the floor, as Kreuziger scored eight of the first 10 second-half points to give Portage a 28-26 lead. Bisch hit a 3-pointer to cap off Portage’s 14-0 run that ended when Pfaff made two free throws to pull Baraboo within 34-28 with 13:10 left.

“No, I just yelled at them,” Howe said of if the Warriors made any halftime adjustments. “I said that we’re not doing the things that we normally do and we’re making this an even harder game than it needs to be. We weren’t communicating with each other. ... Then we let them back in again and we got all tight. Our goal through the season has to be to stay calm, stay relaxed and not force things.”

The T-Birds went on a 10-2 run themselves, including a Moon 3-pointer and a Pfaff three-point play that tied the game at 36 with 9:09 to play. Baraboo built up a 44-39 lead on a Pfaff layup. The offense stalled from there, as the T-Birds were held scoreless for the final five minutes of regulation.

Genna Garrigan tied the game at 44 with a three-point play with 1:08 remaining. Neither team converted down the stretch, then Portage held on in overtime of an intense game that led into a boys basketball game between Baraboo and Portage.

Ratz was the lone Warrior in double figures, finishing with 10 points while Kreuziger and Garrigan each chipped in nine points.

Pfaff attacked the basket and went 6 of 7 from the free-throw line to score a game-high 14 points. Moon made three of Baraboo’s four 3-pointers on the way to scoring 13 points. Klemm added 12 points.

Baraboo was limping down the stretch, as Funmaker, Jillian Shanks and Claire Bildsten all fouled out while injuries took Pfaff out of the game and caused Klemm to play at less than full strength. That left the T-Birds with several freshmen on the court down the stretch, including Jayden Ross, who won the junior varsity game earlier with a free throw with 0.5 seconds remaining that gave Baraboo a 32-31 overtime win.

The Beavers raced out to a 40-point halftime lead en route to a fifth consecutive win over the Warriors.

Offensive efficiency was the name of the game Friday night between the Baraboo and Waunakee girls basketball teams.

Baraboo's Taylor Pfaff saves the ball from going out of bounds during a Jan. 3 home game against Portage.