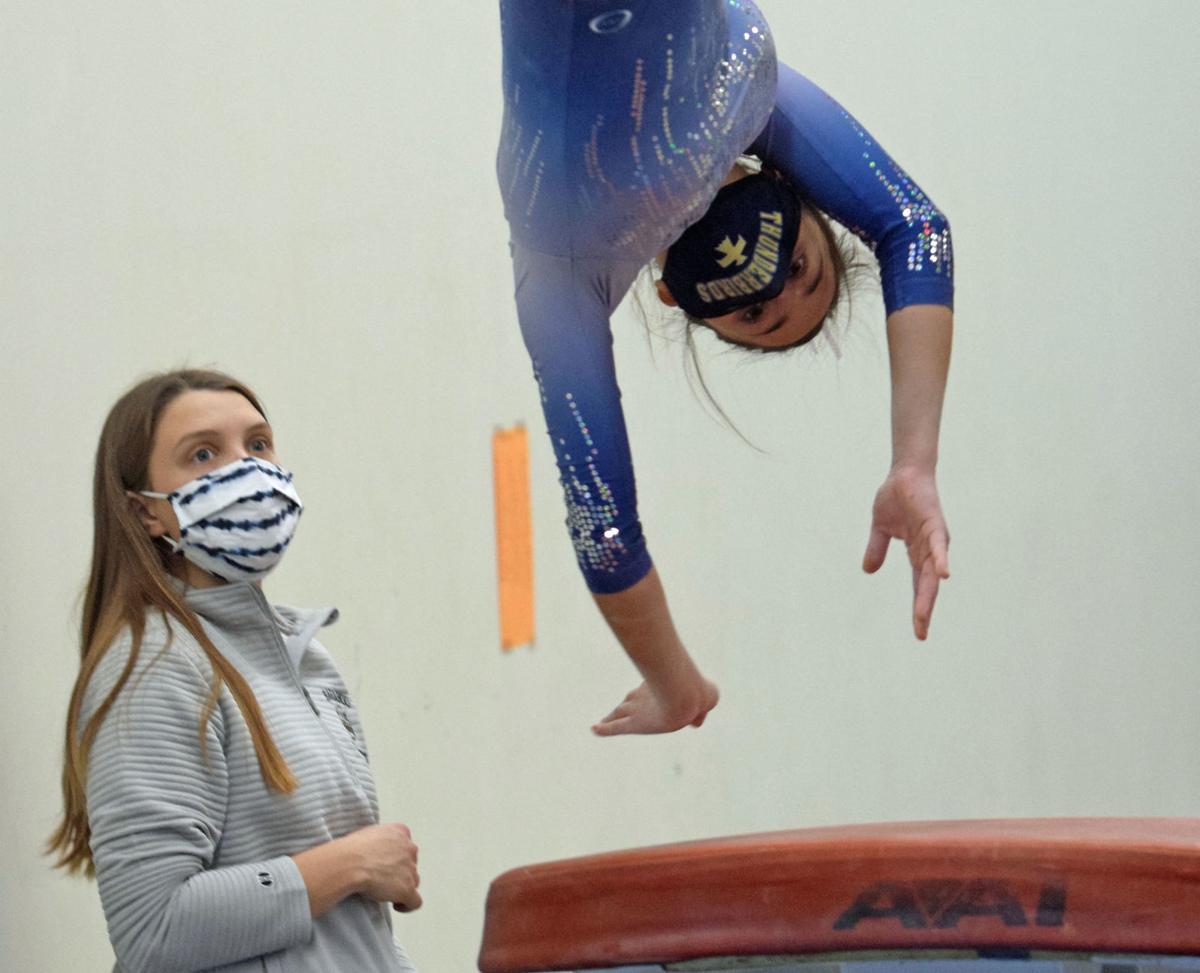 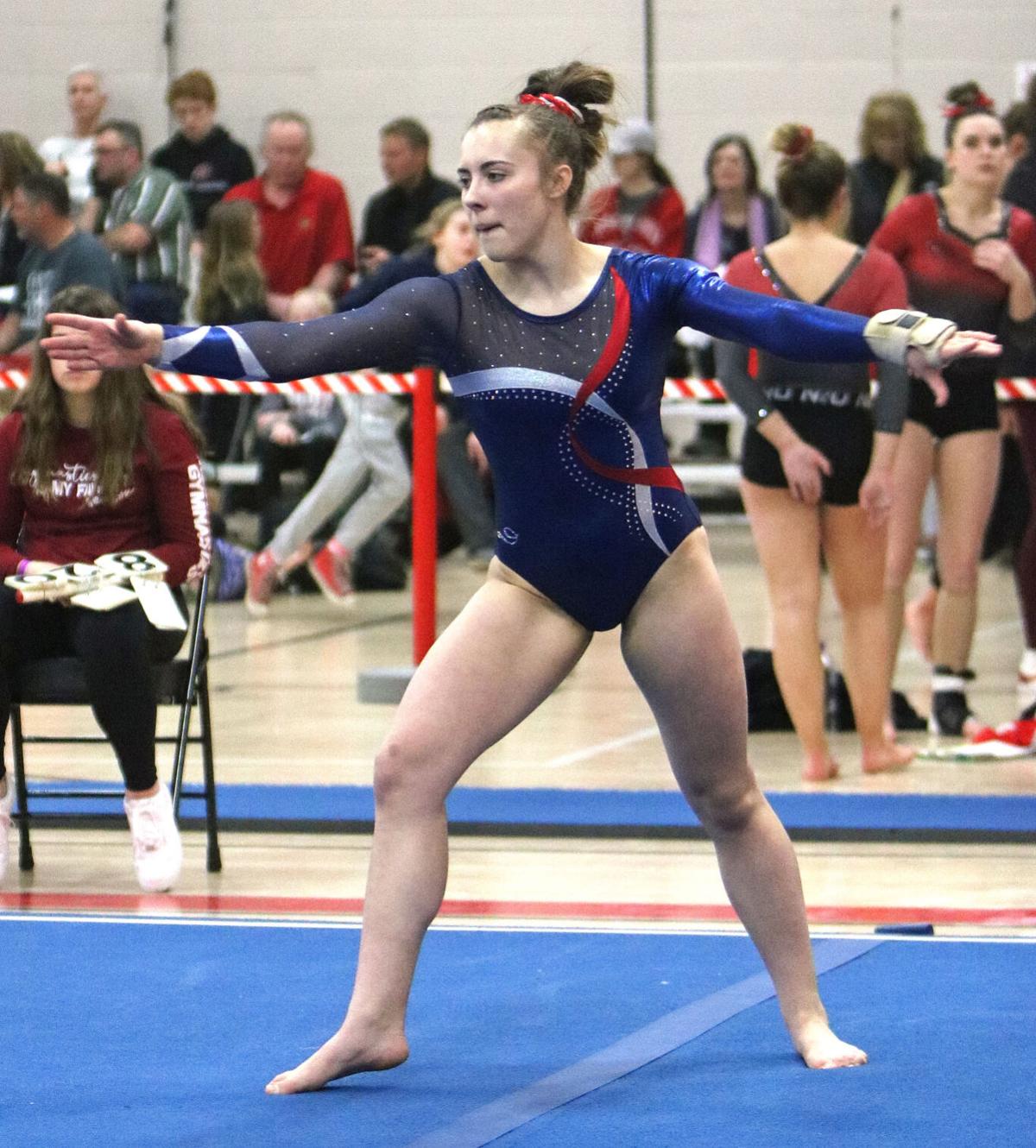 That was notably limited in a shrunk down 2020-21 season that was about a month shorter due to the COVID-19 pandemic. Less practice and competition time has left the local prep gymnastics teams still developing and honing their routines in the days leading up to Saturday's Division 2 sectional meet in Platteville.

"Not having any open gyms before the season and starting practice late, it was a rough start to the season," Reedsburg head coach Ali Schuenke said Thursday. "But we're finally starting to get into the groove of things.

Reedsburg, Baraboo and Sauk Prairie will all be part of Saturday's 11-team meet hosted by Platteville/Belmont/Lancaster. The gymnasts will head there with their eyes on qualifying for next week's state meet, as well as on enjoying themselves in a setting that has been hard to come by this season.

"They're very excited," Schuenke said of her gymnasts' mindset going into their first meet of the year with more than three teams. "They really miss the invites. Those are something they really like forward to and COVID has obviously hindered that experience.

"It's seeing the other girls... it's the competition. I think it provides a little more excitement and adrenaline."

Both Schuenke and Baraboo coach Haley Brooks are hoping that the sectional atmosphere will spark their teams to season-high scores.

"The biggest goal is I want them to have fun and look like they're having fun," Schuenke said. "Score-wise, our highest score so far is a 132.75. Going into the season, with the amount of talent we have on the team, our team goal was to get a 135 this year. If we could do that, that would be phenomenal."

Achieving that quality of performance starts in practice sessions, where the Beavers have been working to put the finishing touches on their routines.

"We treat it like a meet, we warm up and then we compete as a team," Schuenke said of Reedsburg's practices leading up to sectionals. "With the time left over, the girls can go work on what they want to work on."

That growth has been the goal all year in Baraboo's practice facility, where the Thunderbirds have been working for three months since Brooks took over the program.

"Every single gymnast has improved," said the first-year coach, a 2015 Baraboo graduate. "We were able to implement a few bigger skills that the girls have been working on for years. They put in the work this season to make corrections to current routines as well as learn a fair amount of new skills for their routines. Every single gymnast was able to cross something off of their goal sheet in the gym.

"My focus has been to help each gymnast reach their maximum potential. I really tried to provide opportunities for them to safely pursue their goals. They have an immense amount of talent and I do not think they always realize that. I have tried to find a balance between pushing them to be their best while also having fun along the way."

The gymnasts have had to work a bit for their fun. The pandemic shut down some of the typical offseason events and open gyms, while having fewer people around the program has required the Reedsburg gymnasts to set up and take down all of their equipment by themselves.

"It was really a lot of dedication and teamwork," Schuenke said, hoping that her team full of underclassmen has grown closer through the strange season. "I'm really hoping they've bonded enough to build a true team atmosphere where they're putting the team first. They really showed that last meet. Three of them had upgraded vaults and they all fell or didn't do as well on their first vault. But they put the team first and did their backup vault as their second vault, which really helped us get our 132. If they had competed their upgraded vault and fell again, we would not have had the score we had. So I'm really just hoping our team bonded this year, we got out some personality kinks amongst each other and we have that team atmosphere."

While every Beaver is eligible to return next year, Baraboo will be saying goodbye to seniors Alexis Weyenberg and Tierney Becker whenever the current season ends.

"I will always remember our seniors Alexis and Tierney as the little girls in the gym while I was in high school," Brooks said. "They have grown so much and have become fabulous leaders for our team. They always know how to get the gym laughing during a tough practice."

Weyenberg and Becker will lead the T-Birds into sectionals along with Olivia Fernandez-Hydzik and Samantha Walter, who each had season highs in the all-around in a regular-season-ending 122.475-120.525 win over Monona Grove on Feb. 12.

"Olivia comes to practice ready to work," Brooks said of the sophomore. "She has put in a lot of effort this year and definitely has some goals for herself looking forward to sectionals. She has worked past her fears with a few high-level skills on beam, floor and bars. She picks up on things very fast. We have been working on a new vault for sectionals and with a few minor corrections she was able to figure it out. Given that she had never tried that skill before, I found myself impressed with her natural talent."

Reedsburg was also led by a freshman at the 2020 sectional meet in Mount Horeb. Brenna Lutter took ninth in the all-around and led the Beavers in all four events, including scoring 8.25 points to take sixth on the uneven bars — one spot short of qualifying for state.

Lutter will be looking to make a similar impact on Saturday, closing out a season that got off to a tough start.

"She was out for the first month of the season because of COVID," Schuenke said of Lutter, who didn't test positive herself. "She had double exposure, so I think it was like six weeks of quarantine. It was just horrible."

But Lutter eventually returned and is captaining the Beavers alongside junior Rachel Richert.

"Brenna has one of the best work ethics I've seen for a high school student," Schuenke said. "She's really a perfectionist and has high expectations for herself.

"Brenna and Rachel Richert are our captains and they've definitely both been our leaders this season. They've been able to keep the girls in line and motivate them. And Rachel's really stepped up and been solid all year. She mentally is the strongest on our team."

Emily Craker has also provided the Beavers with a boost this year.

"She is very competitive," Schuenke said. "When she puts her mind to something, she gets it done."

No matter how many points the area teams rack up Saturday, Brooks believes there will be plenty of positives to take away from the pandemic-impacted 2020-21 season.

"I hope the girls look back and see how amazing of an opportunity it was for us to even have a season," Brooks said. "We absolutely made the best of the circumstances. I think this will be a great lesson in overcoming the challenges that are thrown at you and making the best of it."

Photos of the Reedsburg girls basketball team hosting Wilmot in a WIAA Division 2 sectional semifinal game on Thursday, Feb. 18 at Reedsburg A…

The top photos of the Baraboo, Sauk Prairie and Reedsburg high school athletic teams from January 2021.

The Reedsburg gymnastics team came into Saturday’s WIAA Division 2 sectional meet with a score in mind.