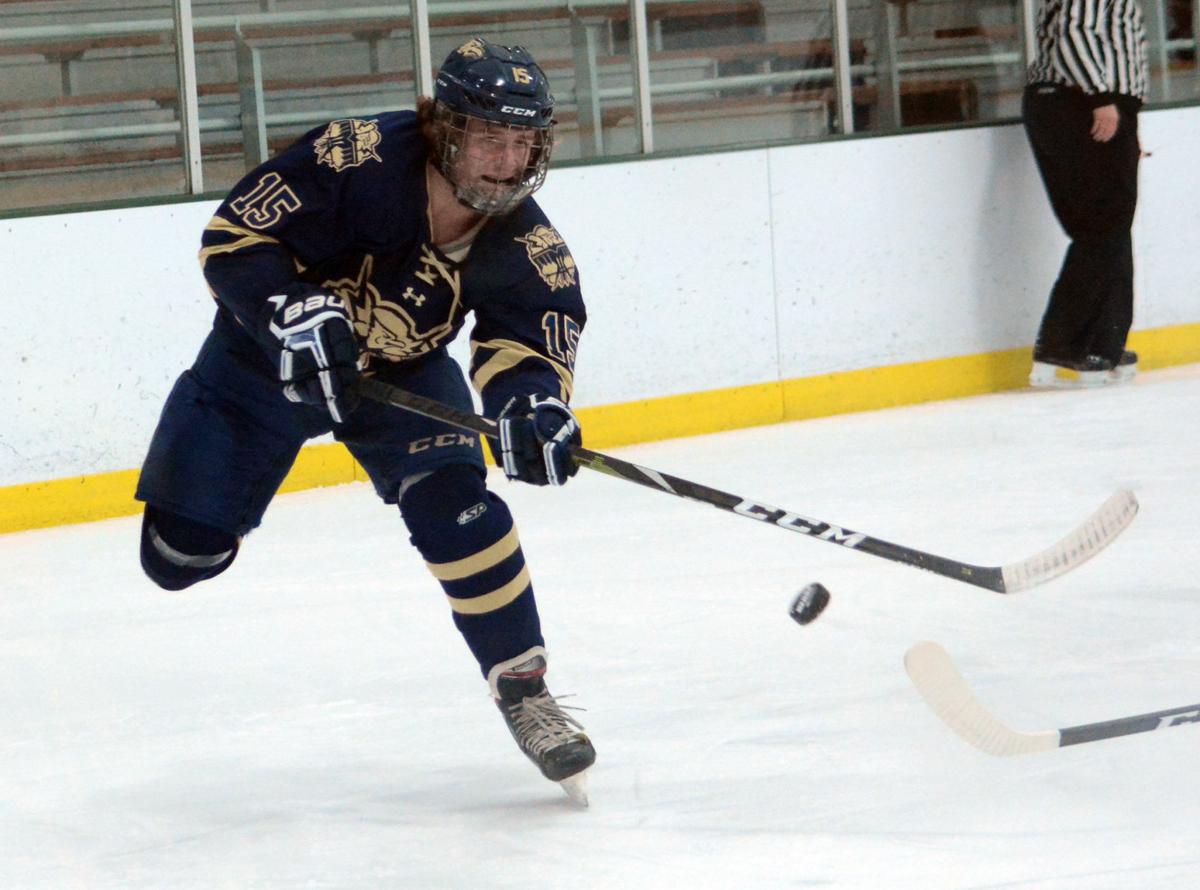 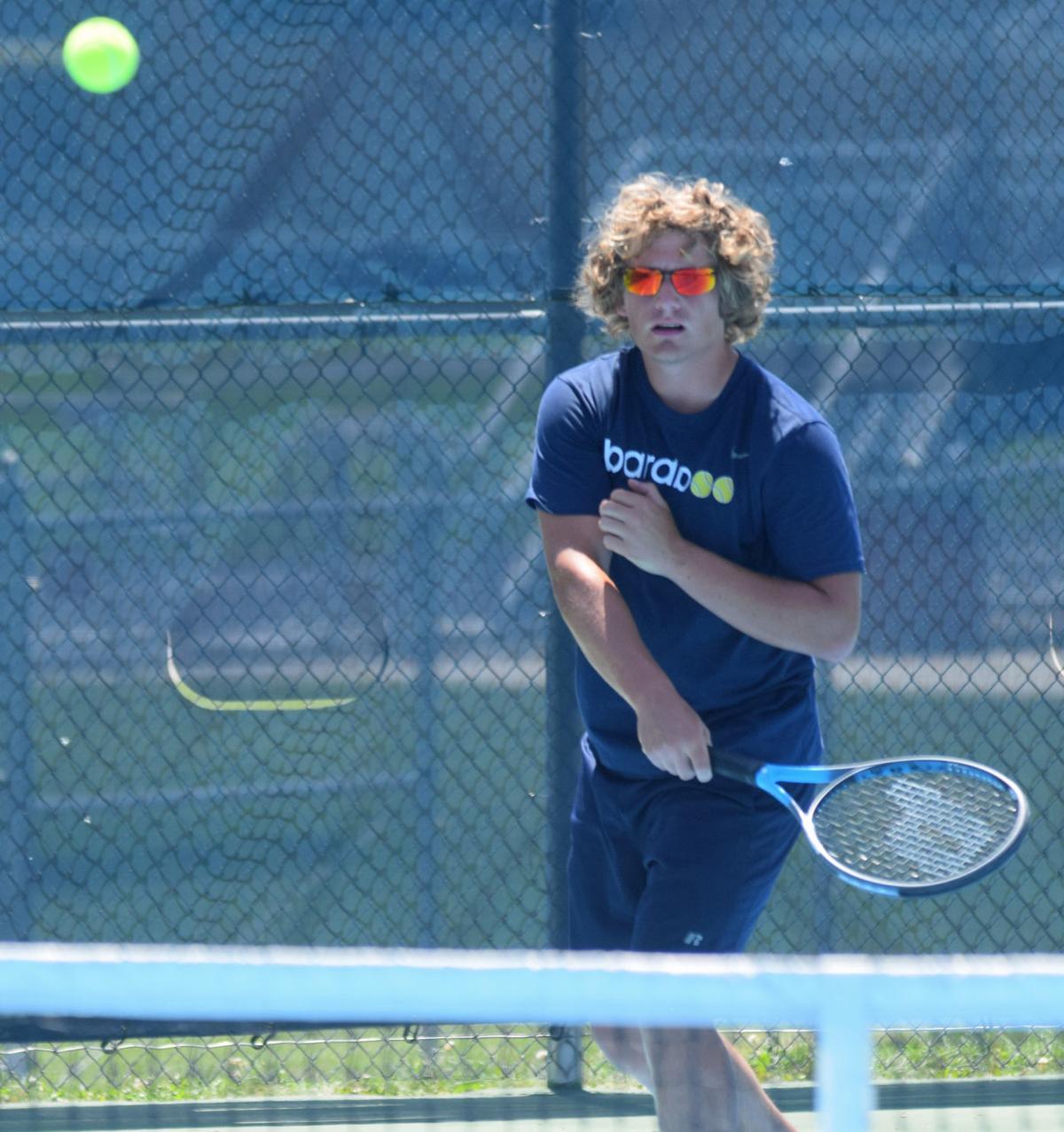 Baraboo's Campbell Koseor competes at No. 1 doubles during the Badger North Conference meet on June 4 in Baraboo.

Baraboo's Campbell Koseor scores a touchdown during a home game against Sussex Hamilton in October 2020. 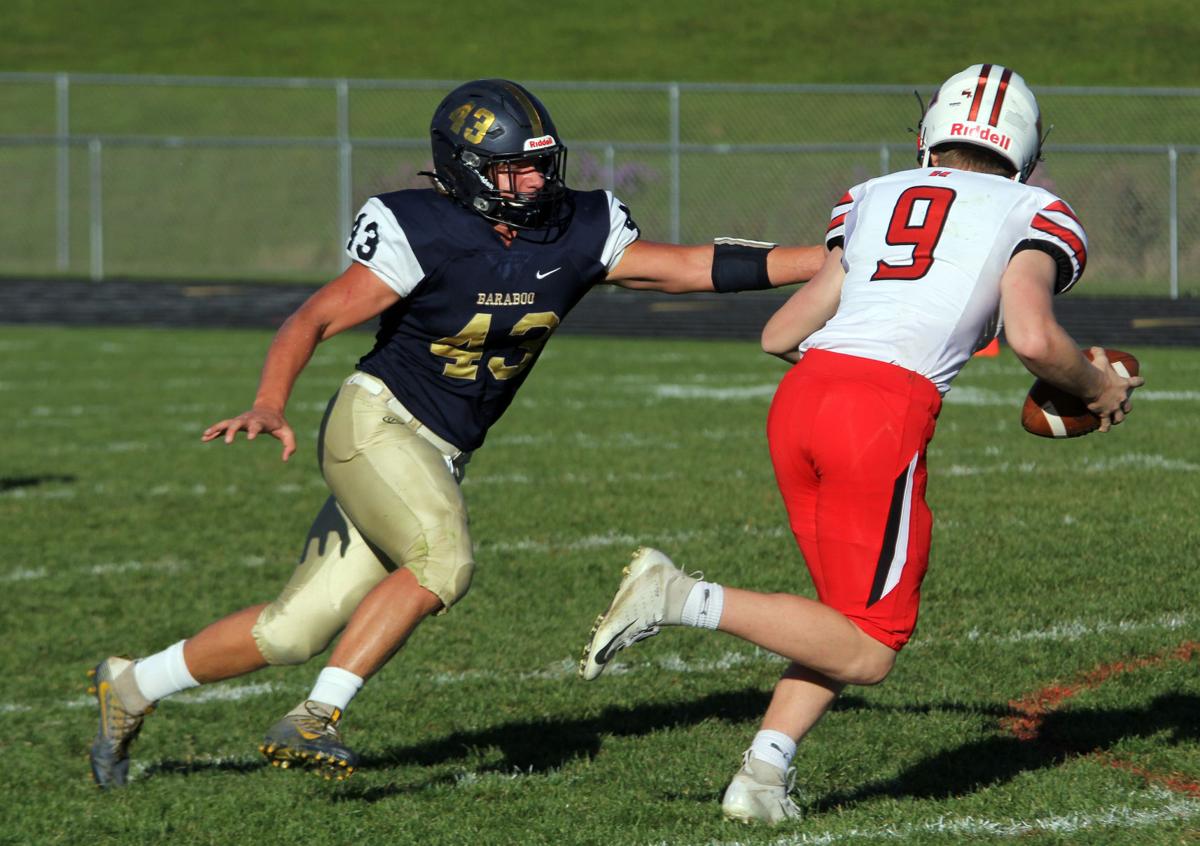 Campbell Koseor showed his Baraboo High School coaches the kind of kid he was freshman year.

The recent graduate continued to show it every step of the way since making the varsity hockey team in 2017-18 and attaching himself to then-senior Jack Macdonald. Koseor and Macdonald, who went on to play juniors and at St. Michael’s College in Vermont, frequently stayed after hours to get extra work in.

“Campbell kind of stuck to his hip,” Baraboo/Portage hockey coach David Clark, then an assistant for Andy Waldvogel, said Tuesday. “Those guys would work after practice, the only two on the team. Campbell wouldn’t let him do it alone. And that’s the kind of stuff that not everyone is built for. Not everyone can do that mentally and physically. It helped Campbell get a lot better.

“He was always the one that wouldn’t be outworked.”

“I feel I was successful by putting in lots of hard work and always trying my best,” Koseor said. “I always tried to put in as much practice as I could, not just during the season, but also in the offseason. I also tried to always do my best, whether that was chasing down the running back, getting to a loose puck in front of the net, or always trying to get to the tennis ball.

“Always trying to do my best has helped me become a better athlete and person. It has also helped me to never get too excited or low during games, and to just focus on trying my best. While there are still things I wish I could go back and do differently, I am still happy with how my high school sports career turned out.”

A lot happened between Koseor’s first varsity hockey game in November 2017 and his season-ending No. 1 doubles appearance alongside Owen Nachtigal at Wednesday’s WIAA Division 1 Oconomowoc sectional. Koseor racked up 11 varsity letters, earning a letter in every season other than freshman year football. He participated in four years of football and hockey, two years of track and field, and two years of tennis while captaining the football and hockey teams as a senior.

Part of being a leader is staying in the game. Clark believes that one of Koseor’s biggest assets was remaining locked in and level-headed no matter what was going on around him.

“We were a young team last year and we needed him to be the rock,” Clark said. “Hockey is such a mentally tough game. You have to be physical and tough, but you cannot cross that line of losing your head or getting a penalty. I think the most penalty minutes Campbell had in his four years was two.

Part of that level-headed attitude was the way Koseor approached athletics.

“I liked playing sports in high school because it allowed me an opportunity to relax and have fun while dealing with the stress of school,” he said. “High school can be a stressful time and sports was my getaway to get some exercise and to engage my competitive spirit. When focusing on getting better to try and win, the stress seems to melt away for me. Sports are something that I just really enjoy and are a great way to meet new people.”

He also frequently found success, leading Baraboo/Portage in scoring as a sophomore, junior and senior while finishing third on the team as a freshman. In those early years, Koseor was asked to pull double duty on junior varsity and varsity, making it even more crucial he was able to work harder than everyone else on the ice.

He also learned how to think through the game, which stood out while he played fullback and linebacker for a Baraboo football team that went 7-2 in 2020. He was a staple on both sides of the ball as the T-Birds had their best season in years, beating every conference team on their schedule and finishing the season ranked eighth in Division 2 by the state’s coaches.

“Cam is an incredibly smart athlete,” Baraboo football coach Steve Turkington said. “I felt as though he was the ‘brains’ of our defense this past fall at linebacker. Cam was also an exceptionally hard worker, a great role model for other athletes, and very reliable.”

Those qualities helped Koseor earn the Baraboo Gold B award, an Offseason Lifter award in football, the hockey team’s MVP award, the Hobey Baker character award for hockey, and the WIAA Scholar Athlete Award. Koseor was also a member of Science Club and Link Crew, helping mentor incoming freshmen throughout their first year of high school.

While staying active for four years, Koseor’s biggest in-game memories from high school sports are scoring his first varsity goal against the La Crosse co-op on Nov. 30, 2017, and claiming a 3-2 win over rival Reedsburg/Wisconsin Dells/Mauston on Jan. 16, 2021.

A different memory stands out to Clark, who got a firsthand look at Koseor’s work ethic during a 2019-20 win over DeForest.

“He was actually sick as all get-out, puked mid-period — long before COVID — but still putting in 100% and scored on a play where he just went through a bunch of guys and would not be denied,” Clark said. “The whole team was in a funk, and he was sicker than most of them, and he just said, ‘We’re not losing this game. We can’t lose this game.’ To me, that’s what Campbell was. He wasn’t dangling around everybody and making the fancy play. He was ‘I’m taking this to the front of the net and seeing what happens.’ He was blue collar until the very end.

“Adversity just did not get to him, and that’s what I’ll always remember him for.”

That quality was tested when the COVID-19 pandemic started to impact activities across the United States. Koseor’s first year on the tennis team was canceled and the 2020-21 school year was altered, but Koseor kept plugging away.

“While COVID has changed the season, I did not approach them any different because of it,” Koseor said. “I treated them differently because of it being my senior year. During the summer, I made sure to put in as much work as possible to get better. With it being my last year of sports, I wanted to make sure to do my best and to give everything I had. I also wanted to leave an impact, both as a player and a leader to help the programs continue to grow and get better with the years to come. It has been a special year because there have been lots of lasts. I wish I could still play more, but I am also ready to move on to the next steps of my life.”

Koseor’s next step is attending the University of Wisconsin-Stevens Point, where he is considering majoring in chemical engineering. Clark thinks Koseor’s in-game attitude should suit him well moving forward.

“Whether it’s going wrong individually or at the team level, it didn’t matter, nothing phased that kid. I think that’s going to set him up in the future,” Clark said. “When you’re that mentally tough and you’re that dedicated, nothing’s going to stop you.”

Jordan Buelow will compete on the Beryl Newman Stadium track for the final time Monday.

The top photos of the Baraboo, Sauk Prairie and Reedsburg high school athletic teams from May 2021.

Baraboo's Campbell Koseor competes at No. 1 doubles during the Badger North Conference meet on June 4 in Baraboo.

Baraboo's Campbell Koseor scores a touchdown during a home game against Sussex Hamilton in October 2020.