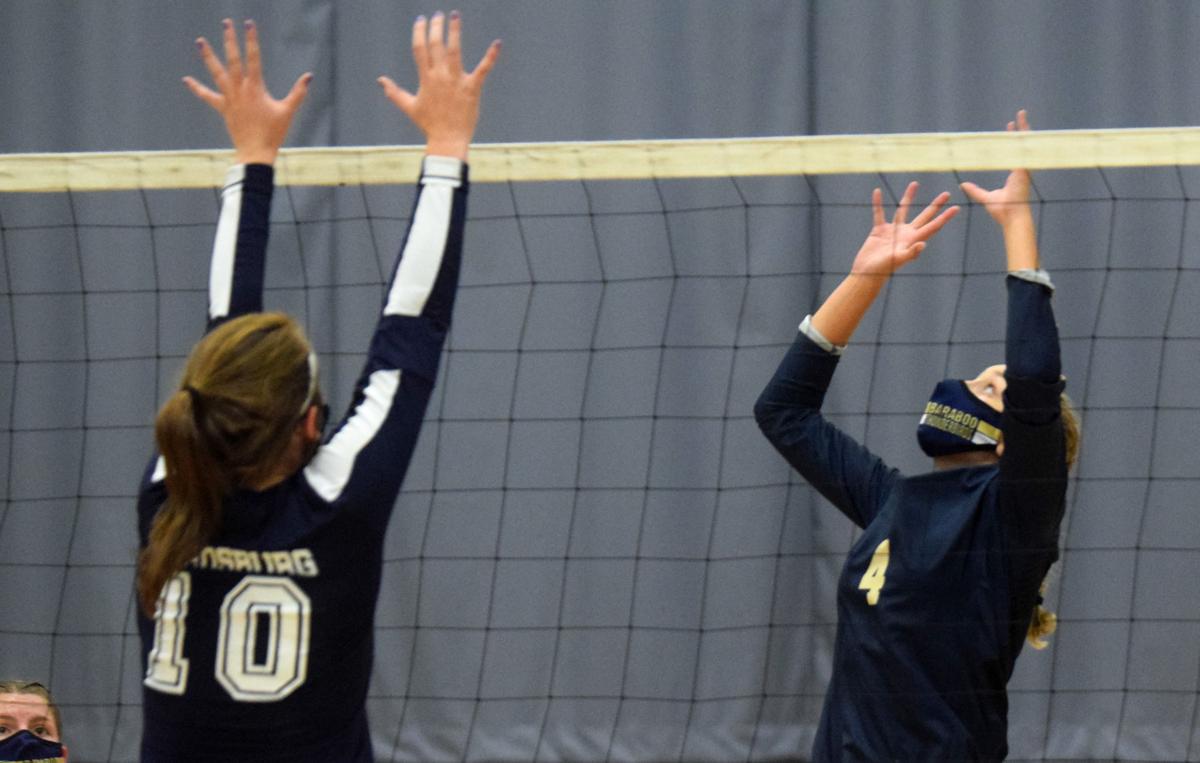 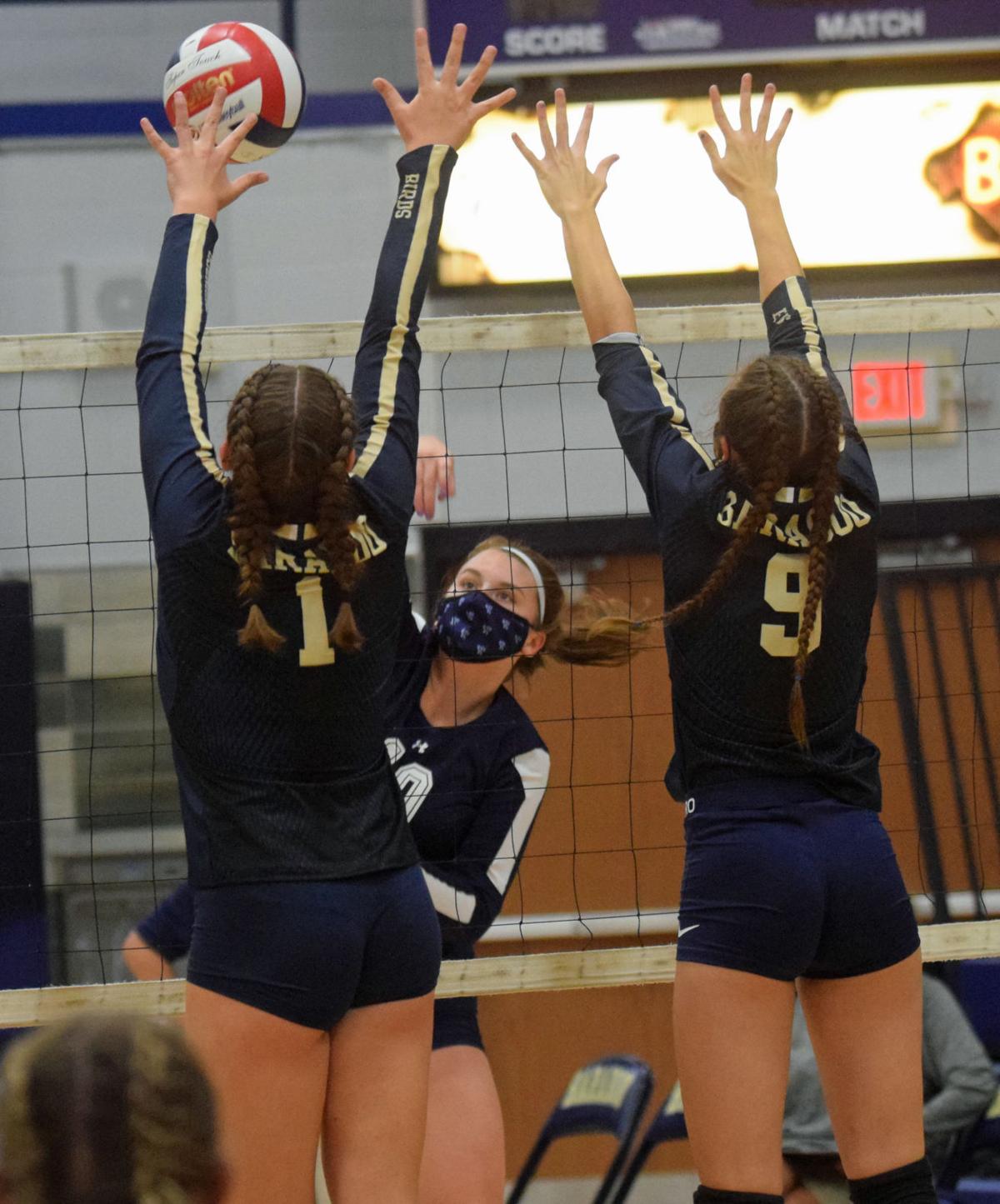 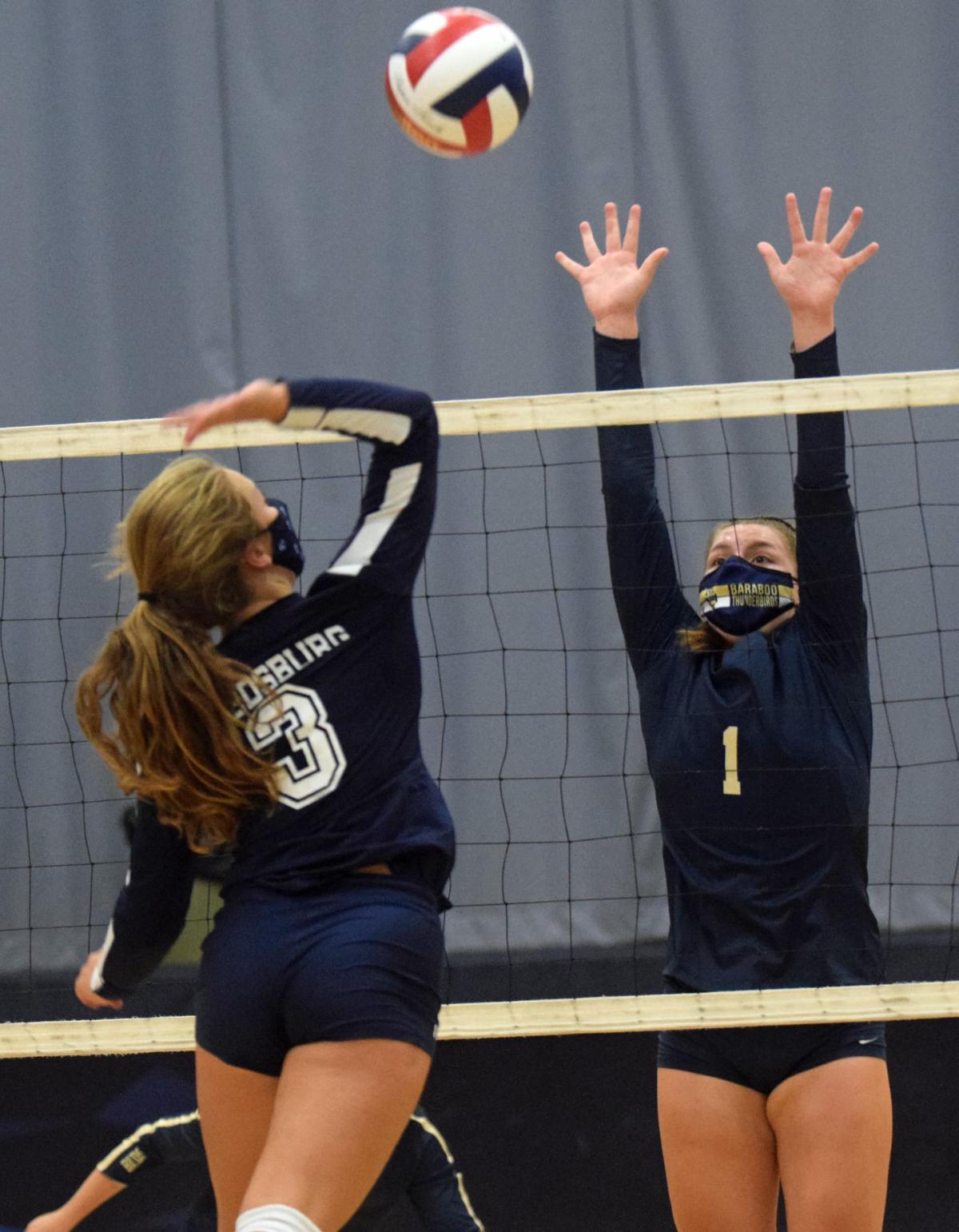 Baraboo freshman Jaydnn Gruner gets up to try and block a shot from Reedsburg junior McKenzie Bestor during Thursday night's non-conference match at Baraboo High School. 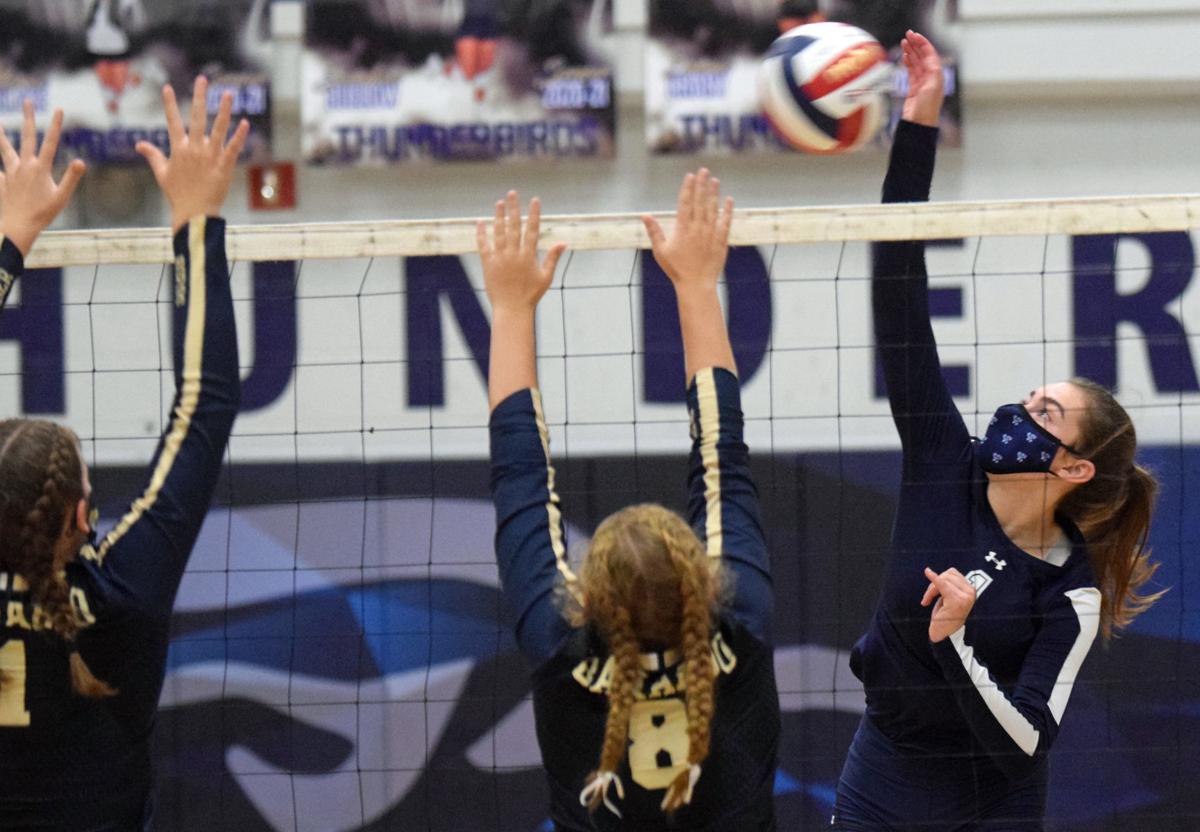 Runs can absolutely sink any chance a team has to comeback in a volleyball match.

The Baraboo volleyball team was the victim of that Thursday night as the Thunderbirds were unable to halt rival Reedsburg in a 25-9, 25-15, 25-13 loss at Baraboo High School. Reedsburg junior Macie Wieman and senior Delaney Horkan each had double-digit kills, while Baraboo junior McKenzie Gruner had a team-high seven put-aways to lead Baraboo in the losing effort.

“I think it’s the consistency right now that’s kind of our Achilles heel; just making sure we can play strong volleyball all the way through instead of having the gaps we have. We show a lot of potential, but the next time, not so much,” Baraboo first-year coach Yvette Updike said.

That potential was on display early in all three sets; however, it ultimately fizzled out as the experienced Beavers (4-1) began to seize control.

In the opening set, Reedsburg opened the game on a 5-0 before Baraboo countered with a 6-2 spurt of its own, including three Gruner kills, to pull within 7-6. The T-Birds never got closer the rest of the way though as Reedsburg proceeded to go on a 7-1 dash for a 14-7 lead, forcing Baraboo into a timeout.

The Beavers continued to keep their foot on the gas out of the intermission, as it extended the spurt into a 17-3 romp to take the first set 25-9.

“I think that’s one of the strong qualities of this team, and we’ve seen it in pretty much every match we’ve played, that if a team starts to make a bit of a run on us and close that gap, they stay composed out there,” Reedsburg coach Sheila Green said. “They don’t seem to get rattled, they’ll figure it out and they’re good problem solvers out there.”

The second set was a mirror image of the first as again the rivals battled back-and-forth over the middle stanza’s opening. The teams traded runs of 2, 3 and 4 points apiece en route to a 9-9 tie, but again, the Beavers buckled down.

Reedsburg went on a 10-4 spurt, including three kills and an ace by junior Mahra Wieman to take a 19-3 lead and force a T-Birds time out. Again the Beavers burst out of the break as they closed the set on a 6-2 run.

The Beavers picked apart the T-Birds all night as the trio of Macie Wieman, who had a match-high 12 kills, Horkan (11) and Mahra Wieman consistently found the open spaces in the T-Birds half.

“They have good vision; they find the corners, they find if someone isn’t covering a spot and they can put a ball down,” Green said.

“I just don’t think we’re seeing the court well enough and Reedsburg does a very good job of seeing the open spot and utilizing that,” Updike added.

Looking to stay alive, Baraboo put together its best start, opening the third set on a 7-5 run, capped off by a kill from senior Emma Crary. Reedsburg responded for a third time however, rattling off nine consecutive points for a 14-7 lead, again forcing a Baraboo timeout.

Reedsburg tacked on three more points for a double-digit lead before Baraboo attempted to mount a comeback. The T-Birds responded with a 4-2 spurt to pull within 19-11 but they never were within single digits the rest of the way as Reedsburg ripped off five straight points to spark a match-sealing 6-2 run.

Freshman Jadynn Gruner had a team-high three blocks and seven digs for the T-Birds, while senior Jordan Buelow added 16 assists. Mahra Wieman had a pair of blocks and 13 assists, while Macie Wieman tallied eight digs and senior Hanna Olson put down three aces for Reedsburg.

Green said the Beavers’ serving has been a major strength for the team this year and “it’s certainly a weapon for us.” As for the T-Birds, Updike was pleased with the team’s energy in the third set

However, she knows that there is room for improvement as often times the team is “watching the game too much from a standpoint versus playing,” with the pandemic and a new system playing key factors.

“We’re trying to incorporate plays but we still need to work on the fundamentals and techniques of a lot things,” she said. “I think it’s a combination of me being new to them and that kind of stuff; we’ll figure it out, it’s just going to take a little more time.”

Both teams return to action next Tuesday when the T-Birds head to Lake Mills, while the Beavers will travel to Sauk Prairie.

REEDSBURG — The Reedsburg prep volleyball team had every answer it needed Monday night.

Baraboo freshman Jaydnn Gruner gets up to try and block a shot from Reedsburg junior McKenzie Bestor during Thursday night's non-conference match at Baraboo High School.