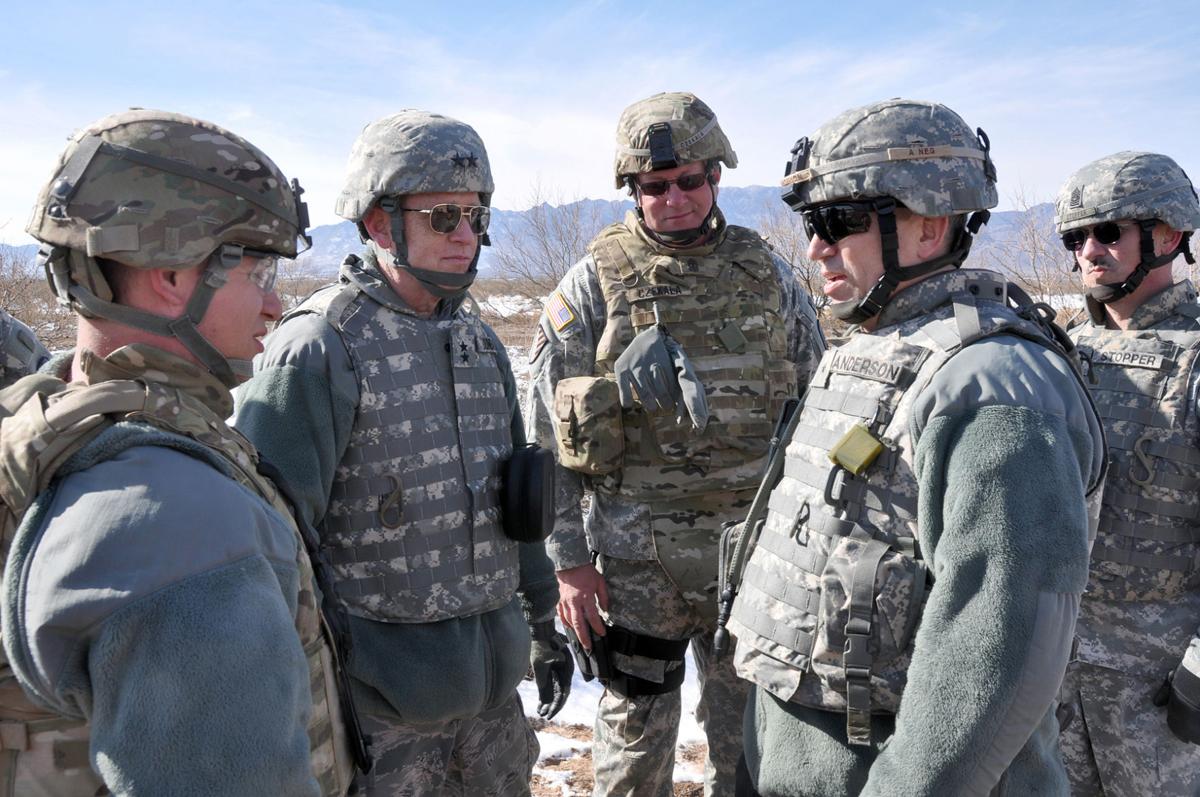 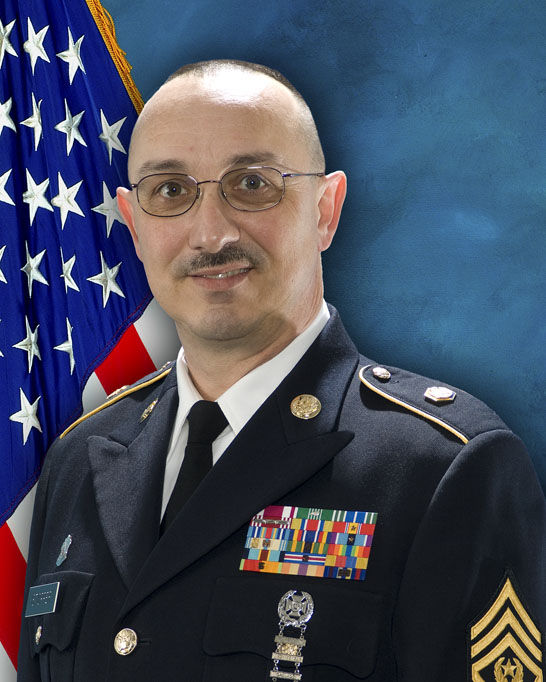 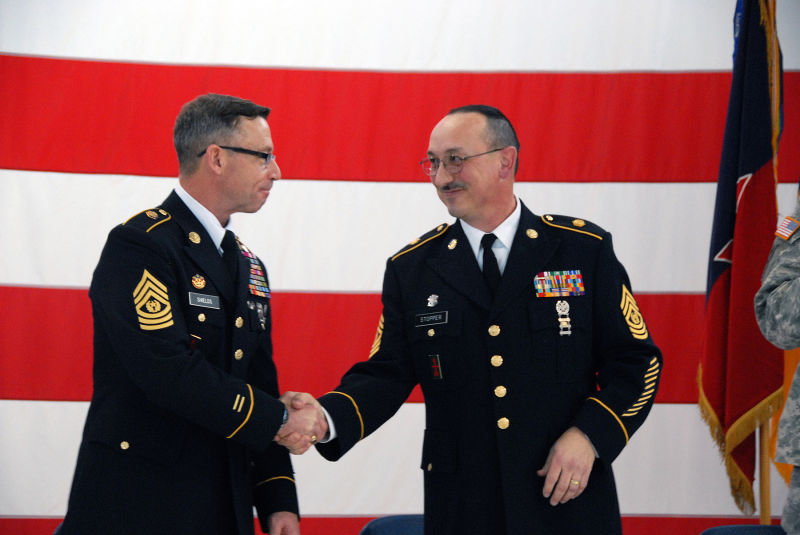 Stopper officially retired from the Wisconsin Army National Guard on May 1 after a 34-year career, and left as the highest enlisted ranking a soldier can achieve.

Stopper said he was a quiet kid in high school, and didn’t really know what to do with his life.

“Three of us actually enlisted together, me and three buddies,” Stopper said. “We just wanted to serve our country. You know, at 17 years old, didn’t really know what the heck we wanted to do. It seemed cool.”

After completing his Cavalry Scout Training at Fort Knox, Ky., he came back to Baraboo where he was a part-time guardsman for six years.

“During that time, I had regular civilian jobs; worked at Flambeau, worked at Isenberg’s Service Center here in Baraboo, and a few others,” he said.

He worked through the ranks during that time and was promoted to Specialist, and in 1985, got a full-time National Guard position in Reedsburg as a temporary technician. He was there for a short while when the Active Guard Reserve program opened in Baraboo, and he transferred there.

“I came to Baraboo as a unit clerk, and stayed in Baraboo for quite some time,” Stopper said. “Not in that position; I worked through a series of other positions throughout the years.”

When the United States government ended the 105th Cavalry (the Active Guard Reserve program in Baraboo) in 1996, Stopper was offered a position with the 173rd Engineering Battalion in Onalaska as a combat engineer. However, there was a catch.

“By that point, after being in the military for 17 years, I had to go back and get re-trained,” Stopper said. “So I did it. I came back and performed as an Operations Sgt. for that battalion.”

After five years in Onalaska, that unit was “taken out of the inventory, and I was given an opportunity to assume a position down in Madison,” he said. He became the Operations Sgt. Major for the 2nd Battalion 128th Infantry. Once again, Stopper had to be retrained. After two years in that position, he was promoted to Sgt. Major in 2003.

The move to this new position was short-lived.

“I assumed that position, and within about 60 days, got called back involuntarily to deploy with the infantry battalion,” Stopper said. “It’s an inherent risk of being good at what you do.”

He deployed with the 2nd Battalion 128th Infantry to southern Iraq and Kuwait for 12 months.

“I was torn to begin with about leaving that unit, because I knew there was a possibility of deployment,” Stopper said.

However, he knew passing on the position at the 64th Troop Command would have been “the career kiss of death.”

No soldiers from his battalion were lost during their deployment, he said, but noted that two weeks before he arrived, a sister battalion from Appleton did suffer casualties.

“IEDs were commonplace,” he said.

“Convoy security stuff really is the most dangerous thing that anyone was doing, because the roads were just the worst place to be,” Stopper said.

Stopper was 44 years old when he deployed to Iraq. He never had served in combat before that, and he said it wasn’t a shock to him to serve overseas after so many years in the military.

“By that time … I had never used the tools I was trained to use, not in a combat-type role anyway, and as an infantry battalion, that’s exactly what you do. It was fulfilling, because you kind of wonder what your net-worth is, you get all that training and all that skill set, and you don’t get to use them. Not that anybody would desire to go war, but it was exciting to go and do what you were trained to do.”

When Stopper came back from war and assumed his dual positions, the Command Sgt. Major of the Wisconsin National Guard position opened.

However, he didn’t meet the criteria to apply.

“I didn’t apply. I stood on my morals and said, you know, we wouldn’t let my subordinates apply for a job if they didn’t meet the standard, I’m not going to do it either,” Stopper said.

Instead, Stopper was called into the office of Brigadier General James Krueck’s office.

The General asked Stopper if he knew why he was there.

“I said ‘No.’ I either did something good or something very, very bad,” Stopper said. “He said, ‘See the office right here next to me? That’s your new office.’”

He was appointed to the position of Command Sgt. Major and started in June 2007.

Instead of overseeing 2,000 soldiers, Stopper suddenly took charge of about 8,000 men and women; the entire Wisconsin National Guard.

Job of a Command Sgt. Major

Stopper said that the Command Sgt. Major is essentially serves as the “eyes and ears” of the boss when it comes to issues enlisted soldiers face.

“Living conditions, morale, pay, food, family issues, health, all their medical stuff ...” Stopper said, adding that his subordinates would contact him when there was an issue, and he’d take it the General.

Stopper said he put out the fires, so to speak, but also made sure that preventable issues could be avoided.

“There was never a dull moment,” he said.

In addition to all of that, Stopper would inform the soldiers of new regulations and attend every send-off and welcome home for the Wisconsin National Guard.

Stopper also attended the funerals or visitations for soldiers, along with the General and the governor.

Stopper said that six years of that “takes its toll” and he’s relieved he doesn’t have to do that anymore. He added, “I was very proud to be able to do that, to represent the Guard, but happy not to have to do that now.”

His retirement in May was his idea; the Guard wanted him to stay, he said. He considered training his replacement part of his duty, and had a line of qualified, knowledgeable, and talented people ready to take his place.

“Five years on the job … you’re holding everyone else up. And I couldn’t justify doing that any longer. Ten people were promoted just by me leaving,” Stopper said.

Life before and after the Guard

He and his wife Cyndi have been married since 1996, and live in the town of Delton with their dogs.

For the near future, Stopper is going to relax for at least six months, but then plans on going back to school to finish his Bachelor’s Degree in Business Management, and then wants to pursue a Master’s Degree. He’s quick to add, “I’m only doing it for me ... I have all my GI Bill benefits, so the Army pays for all the school and for me to go to school. It would be ludicrous not to.”

Stopper said he would, and has, encouraged young people to consider a career with the Wisconsin Army National Guard.

“I tell people, ‘I am not a recruiter. I can’t make this happen for you, but I just want to tell you what I think. This is what it has done for me,’” Stopper said.

Stopper will be 52 this July, and considers the decision to join the Guard at 17 to be a “phenomenal” one. His peers are still working, he said, and he’s done and collecting a pension

LAKE DELTON — The Lake Delton Police Department is looking for information on a child who has been reported missing.