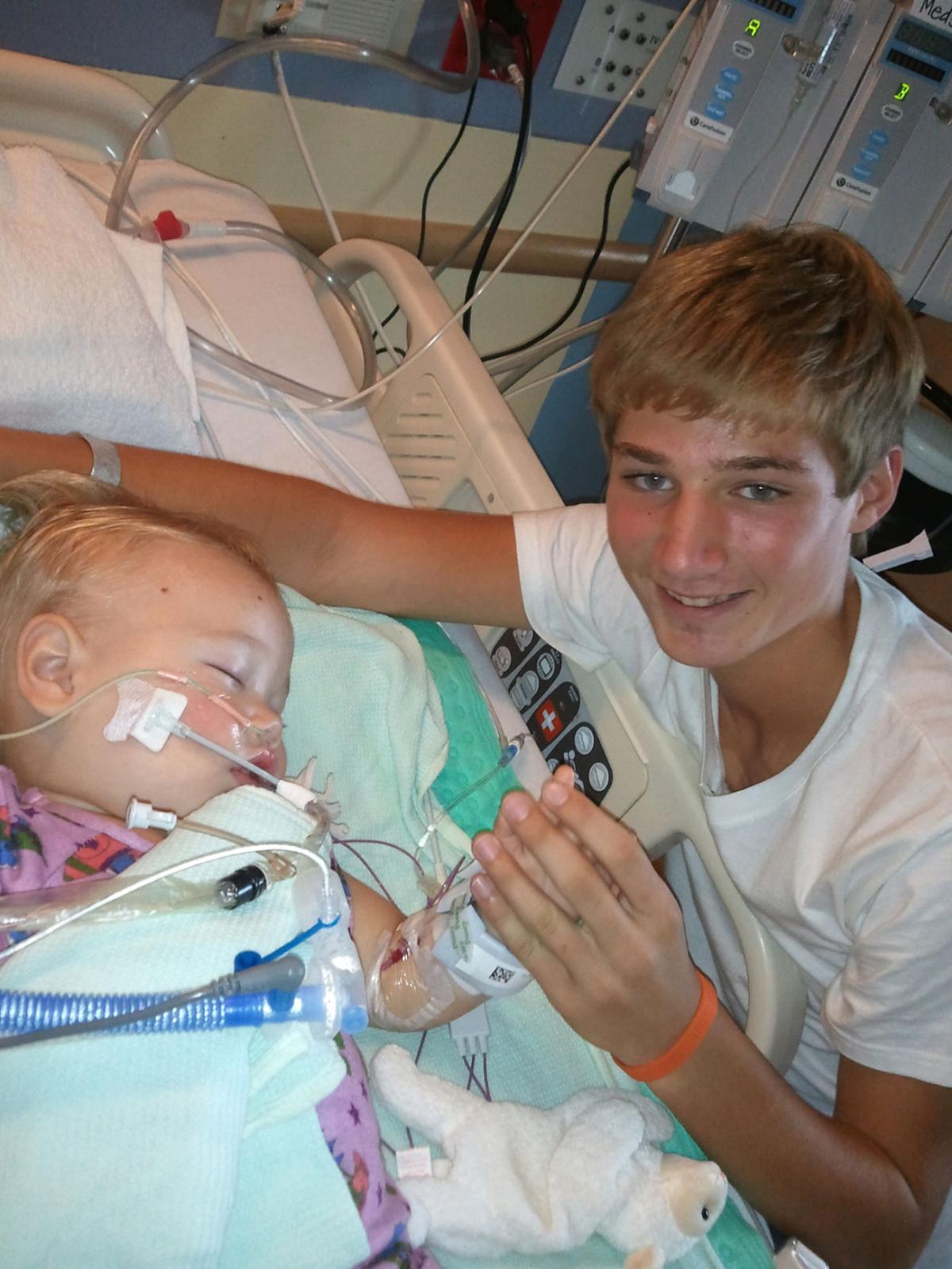 Big brother Mason Mears, right, visits with Caleb Gawronski in Madison when Caleb was hospitalized after a seizure in September. Caleb has had many medical complications after barely surviving the incident and family and friends are holding a fundraiser Saturday to help with medical costs. 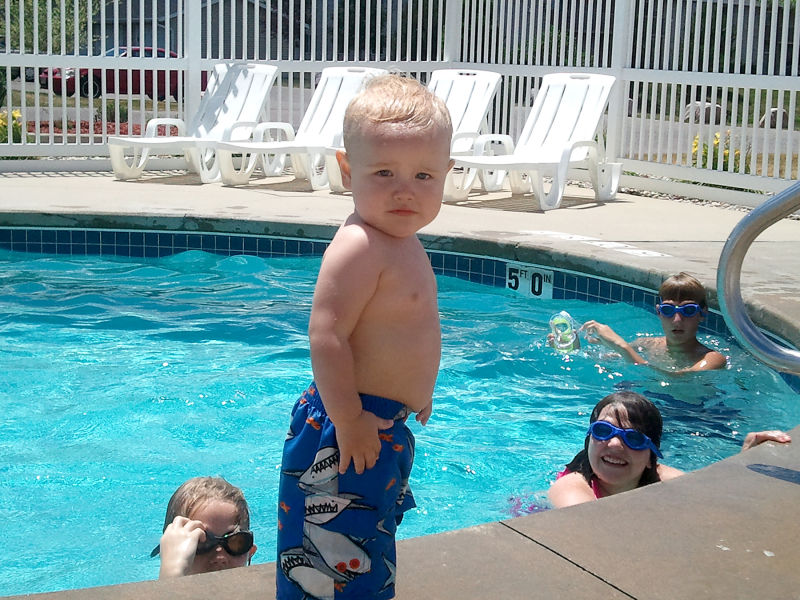 A benefit will take place Saturday at the River Arts Banquet Hall to help pay for Caleb Gawronski’s medical expenses.

By Jessica Frank, For the News Republic

Baraboo toddler Caleb Gawronski is certainly doing better these days than he was last fall when he was on a respirator at American Family Children’s Hospital in Madison.

His family hopes for even more progress in the days and years to come, but that progress doesn’t come easily nor inexpensively, which is why a spaghetti dinner benefit and silent auction for Caleb will be held from 5 to 8 p.m. Saturday at the Baraboo Arts Banquet Hall, 323 Water St.

Caleb’s parents, Jackie and Dennis Gawronski, are doing everything they can think of to help their youngest son progress beyond the grim outlook doctors gave them last fall. Caleb has hypoxic ischemic encephalopathy, which was caused by a lack of oxygen to his brain for a significant amount of time. Many of the treatments they have sought, such as acupuncture and hyperbaric oxygen treatments, are not covered by insurance, but are measures they say helped Caleb immensely.

Last September, the Gawronski family was enjoying some outdoor time together in North Freedom, and Jackie took her then 18-month-old son home for a nap. She said he had a temperature of 102 that caused a febrile seizure — a convulsion caused by high temperature. Jackie took Caleb to the emergency room and during his time there, he received several medications and ultimately stopped breathing.

It took several medical personnel to get the air exchange in Caleb correct, and by the time they did, Caleb was without oxygen for 13 minutes and without a heartbeat for 11 minutes.

He was taken by medical helicopter to American Family Children’s Hospital, where he spent two weeks in the pediatric ICU on a ventilator. His father Dennis said they had to make a decision at the end of those two weeks: Either take him off the ventilator and see what happens or leave him to be on it forever.

The Gawronskis decided to have Caleb taken off the ventilator.

“And he struggled,” Dennis said. “His respiration went to zero. I had to turn off the monitors in the room.”

But Caleb took a breath. Then another one. And then more. A nurse following Caleb’s monitors outside of the room came in and told the family that Caleb’s breathing had stabilized.

Once a gastro tube was inserted into Caleb’s stomach, the Gawronskis brought him home and began their new normal.

Every week, Jackie takes Caleb for acupuncture. She said the procedure has made a difference for him, helping to relax his muscles.

“My wife would leave the house at 7 a.m. and would come back at 5 p.m., five days a week for two months,” Dennis said.

The treatment cost $150 a session and is not covered by insurance. The Gawronskis did receive a grant from Integrative Hyperbaric for $50 a treatment, and their church Open Door Baptist Church also donated some money for Caleb’s treatments.

“The hyperbaric oxygen treatments increase the amount of blood to the good part of his brain,” said Nichole Gawronski, Caleb’s eldest sister. “They can’t do anything with the part of the brain that doesn’t work, but they can make the parts that do work work a lot better.”

Lately, Caleb has received Masgutova Neurosensorimotor Reflex Integration therapy, otherwise known as MNRI therapy. This therapy is used to awaken the response system and allows him to feel things. Dennis and Jackie hope to send Caleb to a five-day MNRI intensive therapy camp in Madison next month where he will receive this therapy for 6 hours at a time. The cost of this camp is $5,500, and again, isn’t covered by insurance.

Dennis Gawronski said that while he has great insurance that will keep Caleb comfortable, pay for surgeries and hospitalizations, Caleb’s improvement is not covered.

“We want to make him better,” Dennis said. “We can’t let Caleb fail.”

The family has leaned heavily on its faith during this trying time, Nichole said.

“I really think that without the depth of their faith, Caleb would not have progressed as far as he has,” she said. “They have the freedom to not lose hope, to not accept the prognosis they’ve been given and to look for other ways to help Caleb.”

Caleb is aware of his surroundings now, and while he can’t talk, he can let his family know if something isn’t right through some vocalizations. He is essentially a quadriplegic, his father said, but is showing signs of improvement. Over the Fourth of July holiday, Caleb was hospitalized in Madison and the doctors that discharged him eight months earlier were amazed at his progress, Dennis said.

The family hopes to raise at least $5,500 at the benefit Saturday. Dennis also said that he and his wife have researched and contacted the Institutes for the Achievement of Human Potential in Wyndmoor, Penn., a non-profit organization known for its work with child brain development. The cost to go to the Dolman Clinic is another $5,500, Dennis said, and they would love to be able to bring Caleb there, too.

What: Spaghetti Dinner and Silent Auction Benefit for Caleb Gawronski

Big brother Mason Mears, right, visits with Caleb Gawronski in Madison when Caleb was hospitalized after a seizure in September. Caleb has had many medical complications after barely surviving the incident and family and friends are holding a fundraiser Saturday to help with medical costs.

A benefit will take place Saturday at the River Arts Banquet Hall to help pay for Caleb Gawronski’s medical expenses.