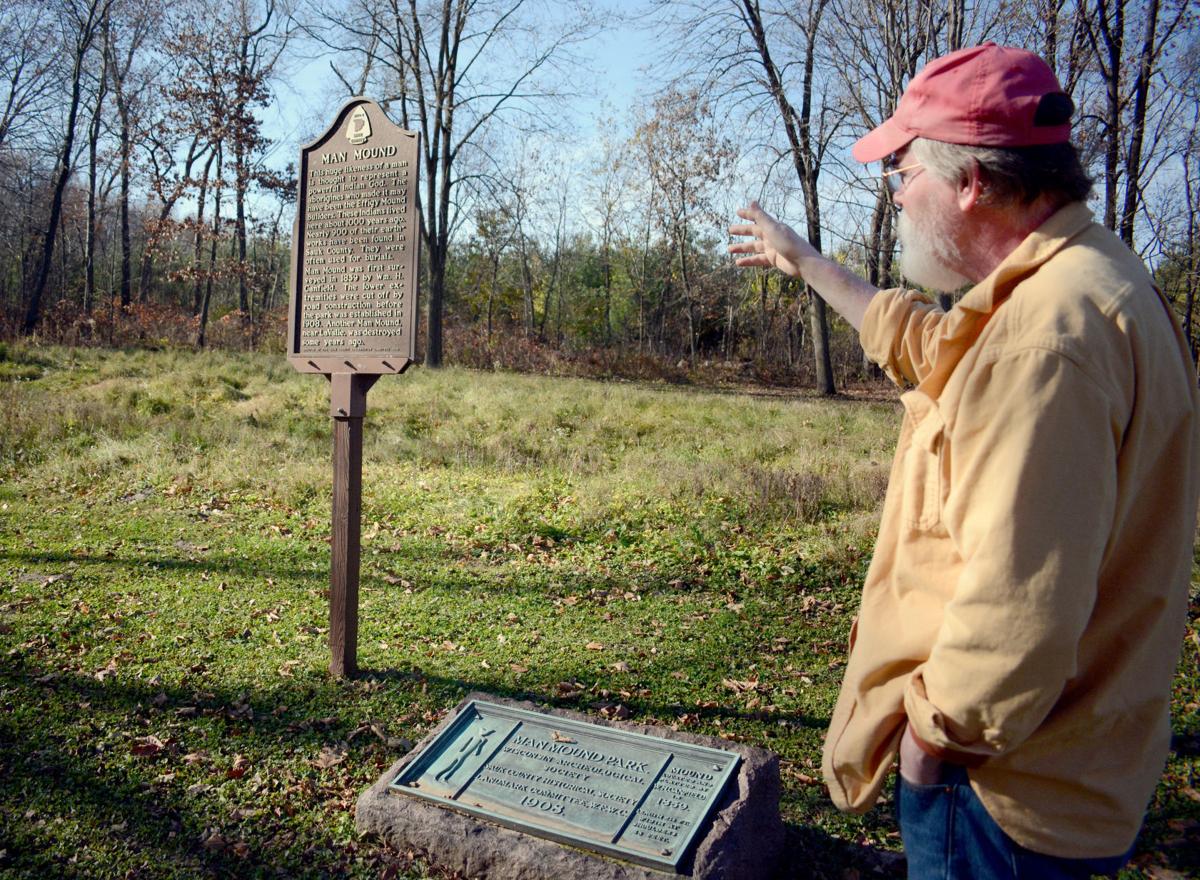 Longtime volunteer caretaker Rob Nurre speaks about the history of the Man Mound outside of Baraboo on Monday. The 1,000-year-old effigy mound was named a National Historical Landmark by the National Park Service last week. 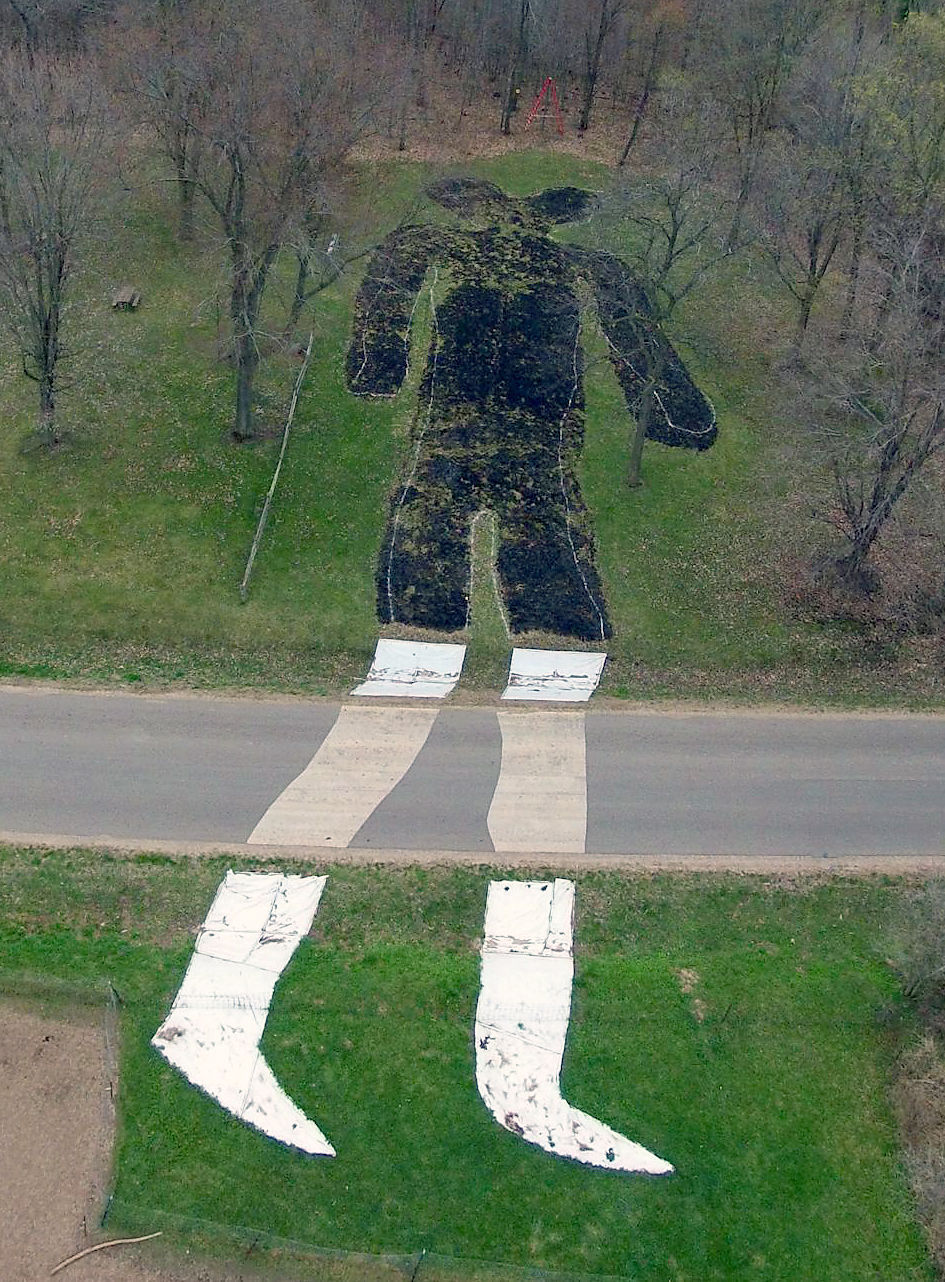 The 1,000-year-old Man Mound located outside of Baraboo was named a National Historic Landmark by the National Park Service last week.

Rob Nurre hears a lot of interesting theories about what the Man Mound outside of Baraboo could represent and how it came to be.

As a longtime volunteer caretaker of the site, he’s heard speculation that the 214-foot effigy mound could depict a man wearing a traditional Native American headdress, while others say it represents some kind of ancient deity. More radical theories even have suggested the possibility of extraterrestrial influence.

Nurre said the mystery surrounding the mound draws many visitors and adds to its intrigue – enough that Man Mound was designated a National Historic Landmark by the National Park Service last week.

The mound is the last of its kind depicting a human-like figure anywhere in the world. Others have been destroyed either by land development or flooding and other natural causes.

Man Mound was purchased in 1907 through the combined efforts of the Sauk County Historical Society, the Wisconsin Archeological Society and the Wisconsin Federation of Women’s Clubs with the intent to preserve the site. It was the first effigy mound ever to be purchased with preservation in mind, Nurre said.

Nurre believes the mound’s new status as a historic landmark will allow for its continued preservation, which he said is important because it represents a belief system that was held by indigenous people thousands of years ago.

“They created these images here just as other cultures have created images like the Buddha or Catholic Saints,” he said. “It’s a similar thing.”

Most archaeologists agree the 1,000-year-old mound is some sort of burial ground and should be respected as such, Nurre said.

The designation as a historic landmark was the result of a five-year nomination process led in part by Amy Rosebrough, staff archeologist with the Wisconsin Historic Preservation Office. Rosebrough offered her expertise on effigy mounds throughout the process, which she obtained during her doctoral studies on the state’s effigy mounds.

“It was a matter of doing additional research into the history of the site and how it fits in with other effigy mounds, and then forwarding that information to the park service,” Rosebrough said.

Rosebrough hopes the Man Mound’s new status will highlight and draw interest in the hundreds of other effigy mounds around the state. South-central Wisconsin is thought to be the primary home of the culture that constructed the ancient mounds.

“We’re hoping that the designation will allow the Man Mound to become an ambassador to the rest of the effigy mounds in the state,” Rosebrough said.

Nurre plans to hold an event next spring to commemorate the designation. He also intends to install a new plaque to mark the mound’s location and add three interpretive panels at the park to better tell the story of the nation’s newest historic landmark.

Until then, he’ll continue to field theories about the mound, although any definitive answers are hard to come by. Regardless, Nurre said he’s content to continue exploring the possibilities.

“We tend to be a culture that wants an answer,” Nurre said. “But as far as I know, there isn’t one answer. I’d rather get visitors thinking – I prefer the exploration of the question.”

A Mauston man who had been missing since early Saturday morning was found dead, after his car was submerged in the Lemonweir River.

After a proposed remodel of his office proved too expensive, Columbia County Board Chairman Vern Gove moved to a vacant space on the county ad…

The Piggly Wiggly in Pardeeville is under new ownership.

Wisconsin is in phase 1B of coronavrius vaccine distribution as of this week and local police staff are being vaccinated as a result.

REEDSBURG — The Rotary Club of Reedsburg-Western Sauk County has decided to disband after serving the community for almost 30 years.

Hoping to entice prospective residents to Portage, the city is partnering with a New York-based company to produce promotional videos, an effo…

Longtime volunteer caretaker Rob Nurre speaks about the history of the Man Mound outside of Baraboo on Monday. The 1,000-year-old effigy mound was named a National Historical Landmark by the National Park Service last week.

The 1,000-year-old Man Mound located outside of Baraboo was named a National Historic Landmark by the National Park Service last week.