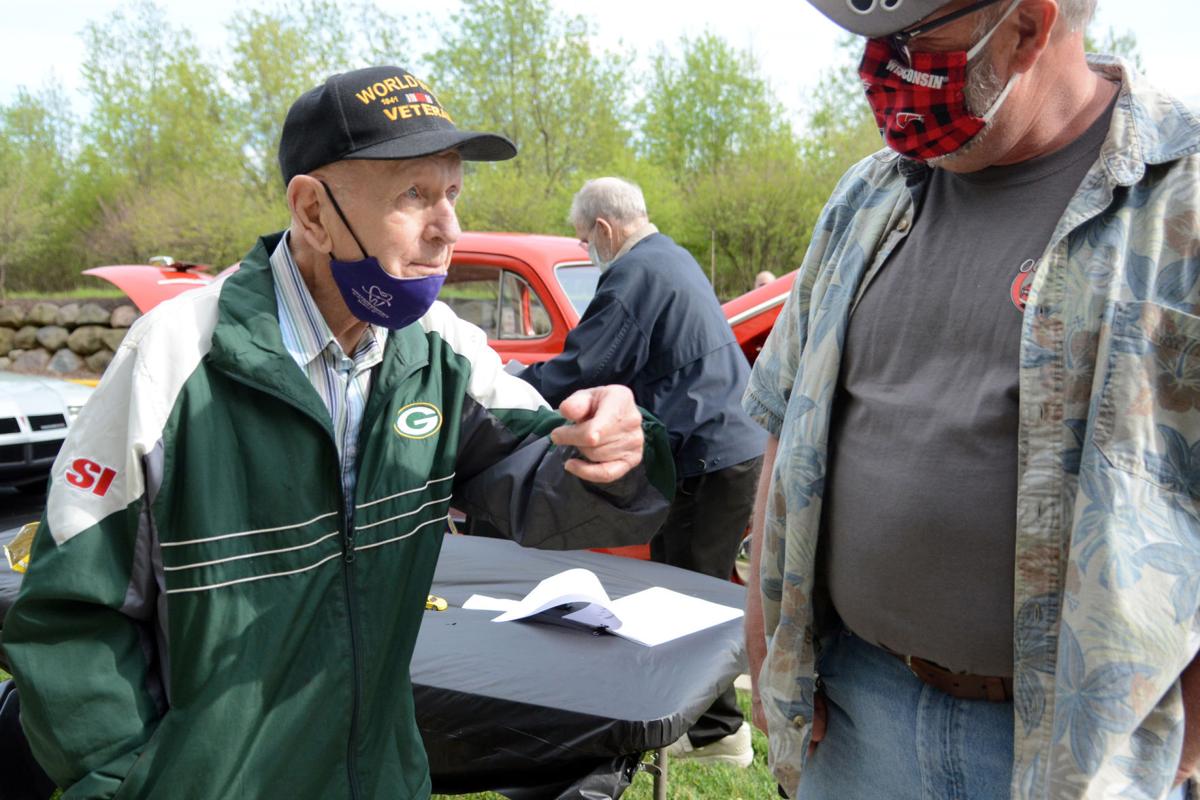 Allen Paschen, left, a resident at Oak Park Place, talks about cars with visitor Pat Steinhorst Wednesday afternoon during a classic car parade outside of the Baraboo senior living facility. 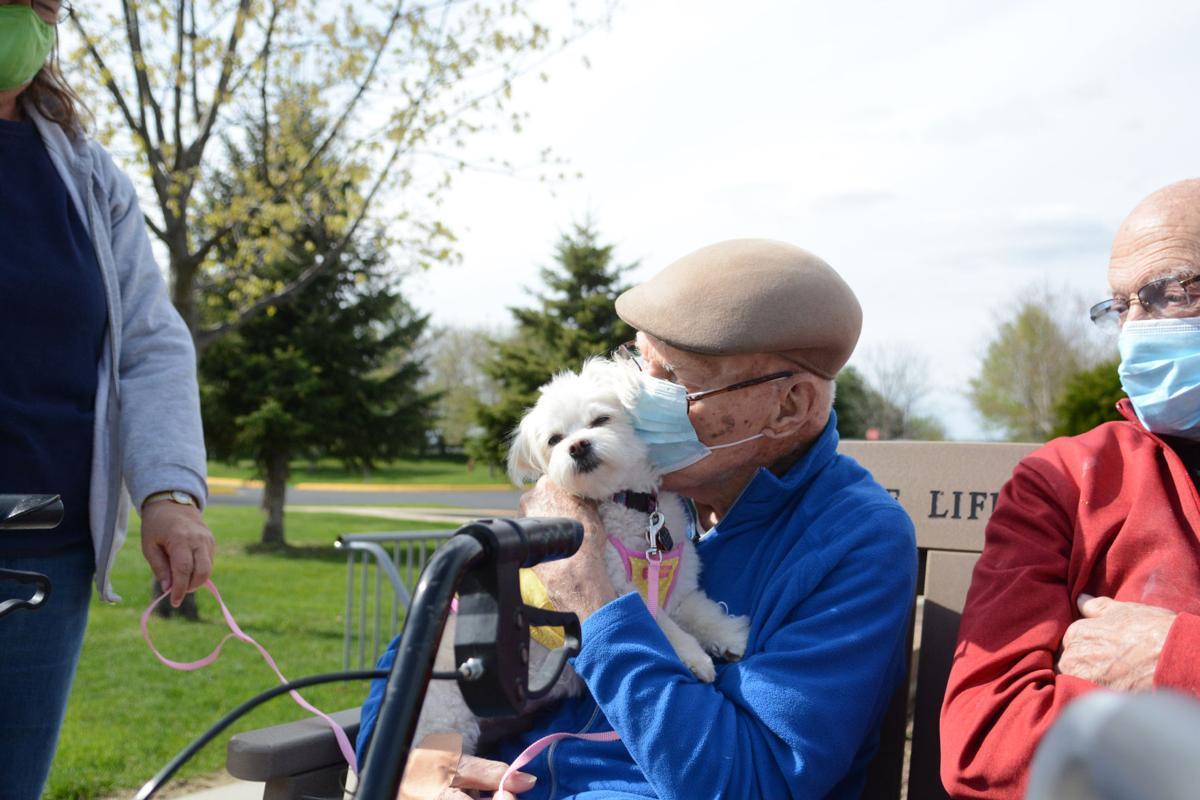 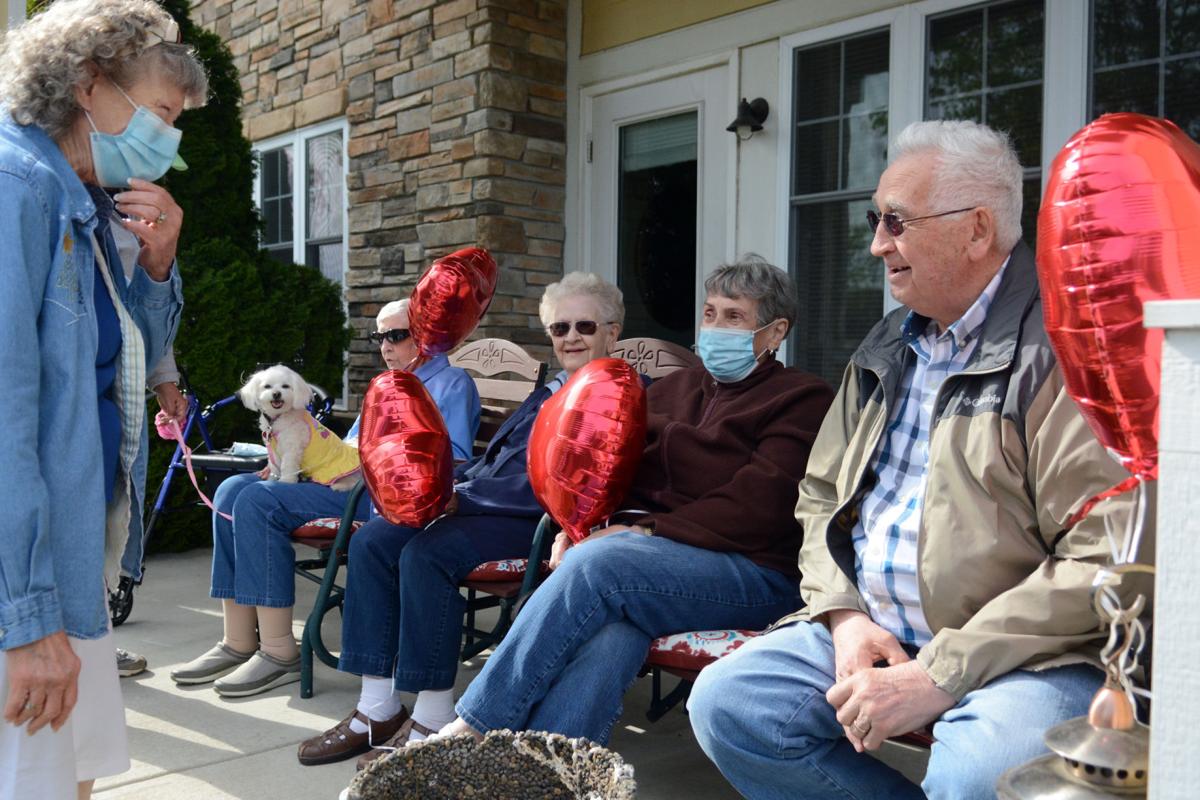 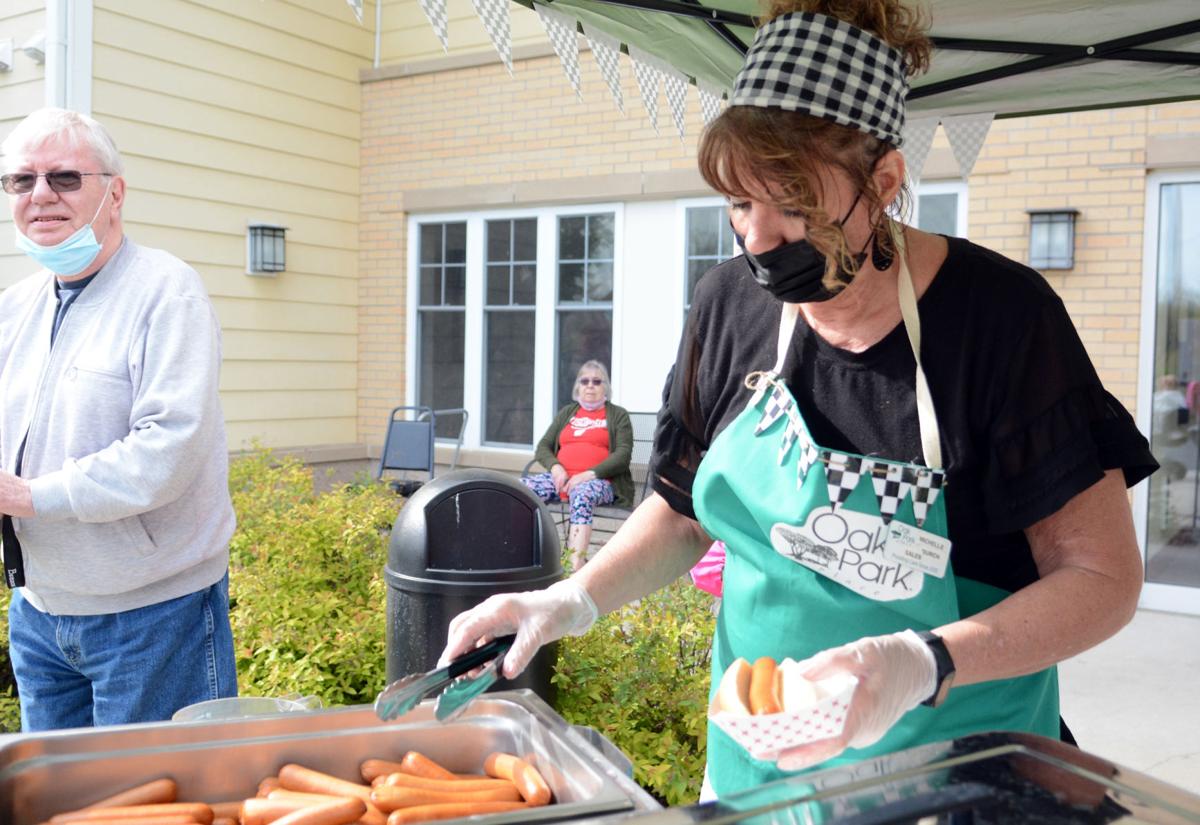 Michelle Burch, marketing assistant for Oak Park Place, serves up chili dogs Wednesday afternoon outside of the Baraboo senior living facility during a classic car parade she helped organize with the Baraboo Classic Cruisers and the Dells Area Cruisers.

As the weather warms up and coronavirus restrictions ease, a Baraboo senior living facility has been starting to resume some activities for its residents, including a classic car parade Wednesday.

Allen and Mona Paschen, independent living residents at Oak Park Place, both said they appreciated the event, which Oak Park organized with the Baraboo Classic Cruisers and the Dells Area Cruisers.

She said the facility makes “everything fun.”

“And look at the cars,” she said. “They’re just adorable.”

Several assisted living and memory care residents sat outside the facility’s north entrance, some with visiting family, as roughly a dozen classic cars drove by to park in front of them. They had a chance to talk with the Cruisers, pet a therapy dog and get a closer look at the vehicles before the parade headed off to the south entrance, where independent living residents waited.

Michelle Burch, Oak Park sales and marketing assistant, said staff are finally back to planning “somewhat normal events.” The outdoor parade was open to the public, and staff set up a table to serve chili dogs, chips and soda.

“We’re really getting the residents involved. I’ve been having them come to me with their favorite car growing up and what make and model it was,” Burch said. She found pictures of the cars and strung them up at the event so residents could find theirs.

“It seemed to make everybody feel good,” he said, especially when they couldn’t visit indoors. “Now you can, but we still thought, like with memory care up there, it’d be good for them and good to get the people out.”

Many people react well to seeing cars from the 1950s and ’60s because they remember them from their childhoods, he said.

“No matter where we go with any of our classic cars here ... people come up and talk to you about it,” Gorder said. “You know, ‘Oh, my dad had one like that,’ or ‘my uncle had one,’ or something like that. … I think it spurs a lot of memories of their youth, and I think that just helps the whole feeling about themselves and everything else.”

'Adopt a Grandparent' programs meant to 'bring a smile' to Portage, Baraboo seniors

Residents said living under quarantine for the last 14 months has been difficult. As a member of the American Legion honor guard, Allen Paschen said it bothers him that he hasn’t been able to attend his friends’ funerals.

But the parade offered them a view at the other side of the ongoing pandemic.

“It’s good that we can get out and do this again,” Ron Bruni said. “It’s a great show. Good to see these old cars.”

If there’s anything Sara Britt has learned over the past year, it’s she’s more resilient than she believes.

Owning a restaurant wasn’t just a dream for Jillian Campbell, it’s also in her bloodline.

Another of last year’s canceled events came back this week, albeit modified, when Baraboo High School brought its senior scholarship recipient…

WISCONSIN DELLS — When Nicholas Scholz entered Joseph Capener’s hospice room Tuesday, Capener rated his pain as an eight out of 10. High, like…

Allen Paschen, left, a resident at Oak Park Place, talks about cars with visitor Pat Steinhorst Wednesday afternoon during a classic car parade outside of the Baraboo senior living facility.

Michelle Burch, marketing assistant for Oak Park Place, serves up chili dogs Wednesday afternoon outside of the Baraboo senior living facility during a classic car parade she helped organize with the Baraboo Classic Cruisers and the Dells Area Cruisers.