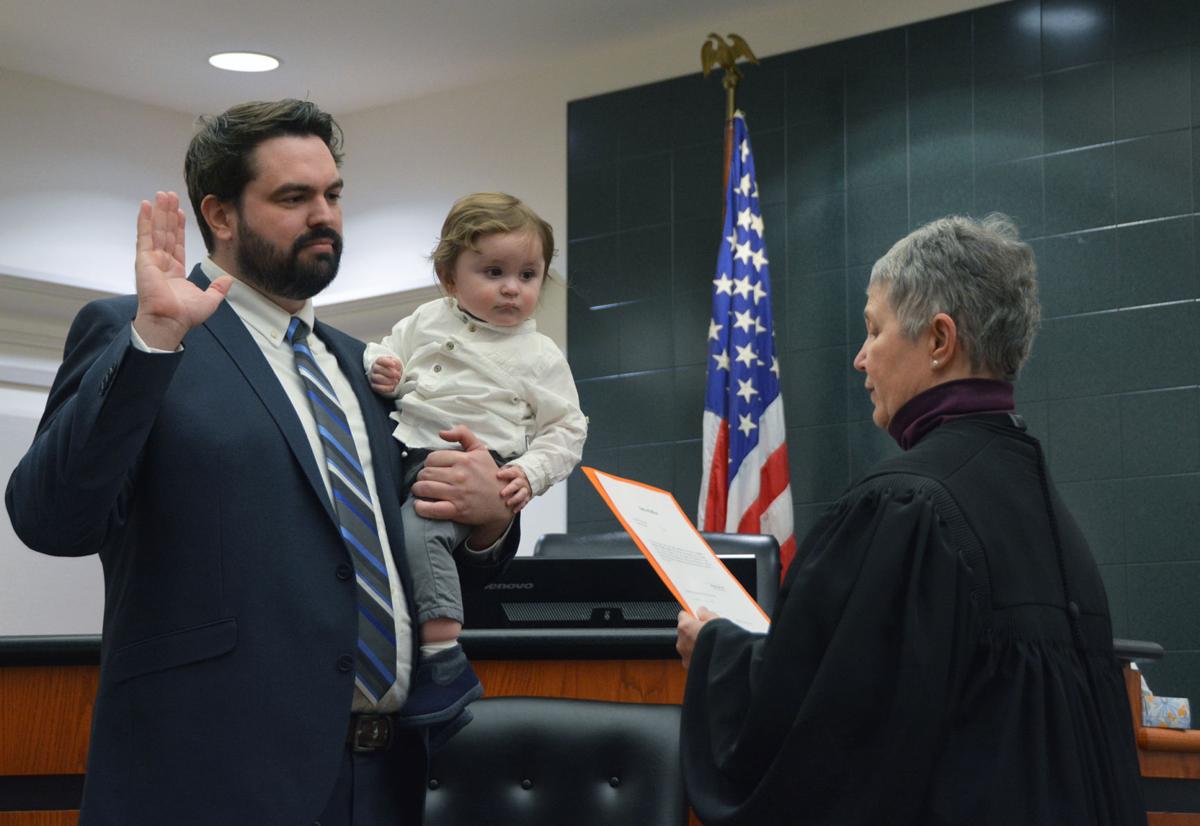 Mike Albrecht takes the oath of office as the newly appointed district attorney with his son, 11-month-old Henrik, as he is sworn in by Sauk County Circuit Court Judge Patricia Barrett during a ceremony in November at the Sauk County Courthouse. 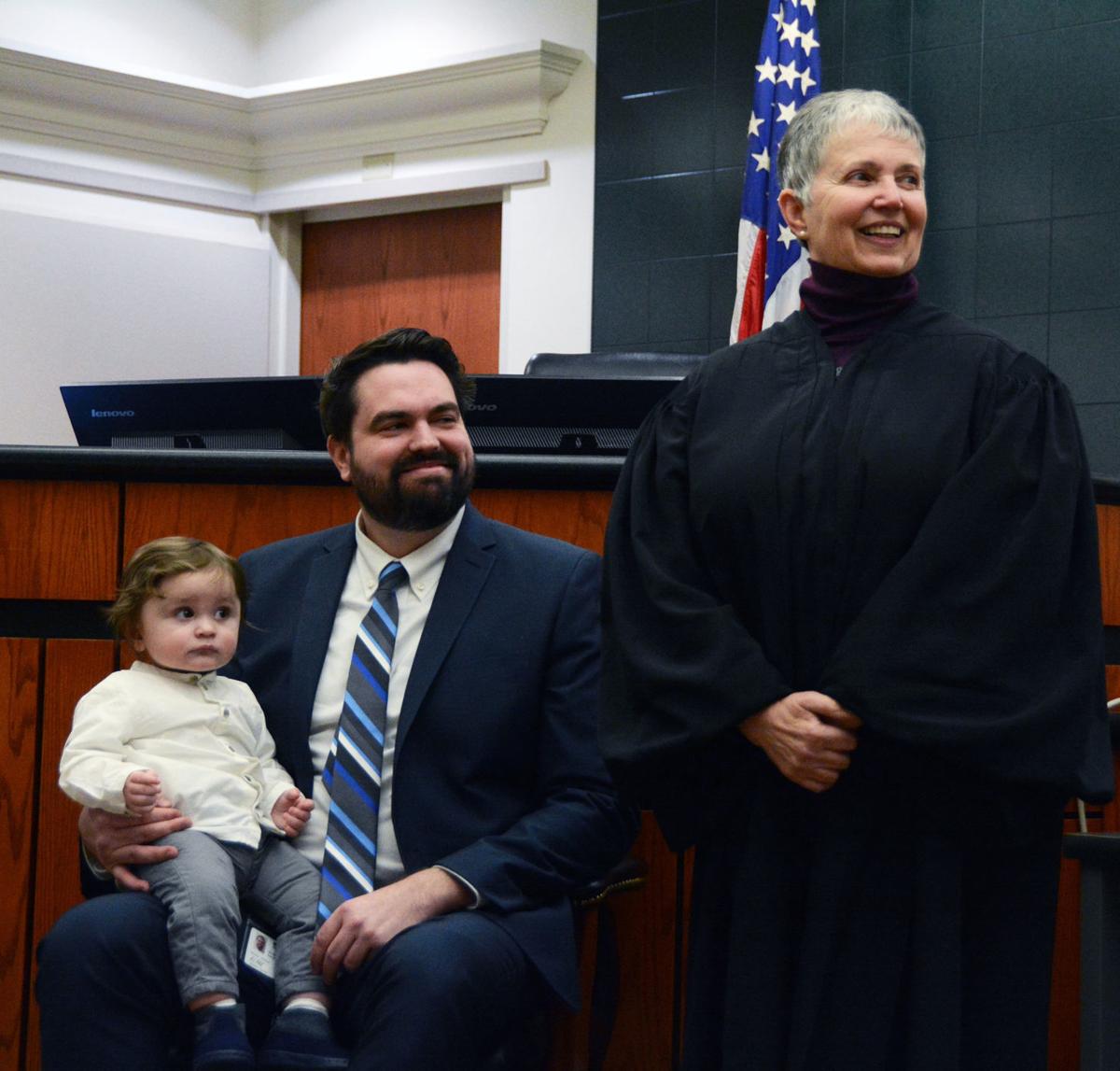 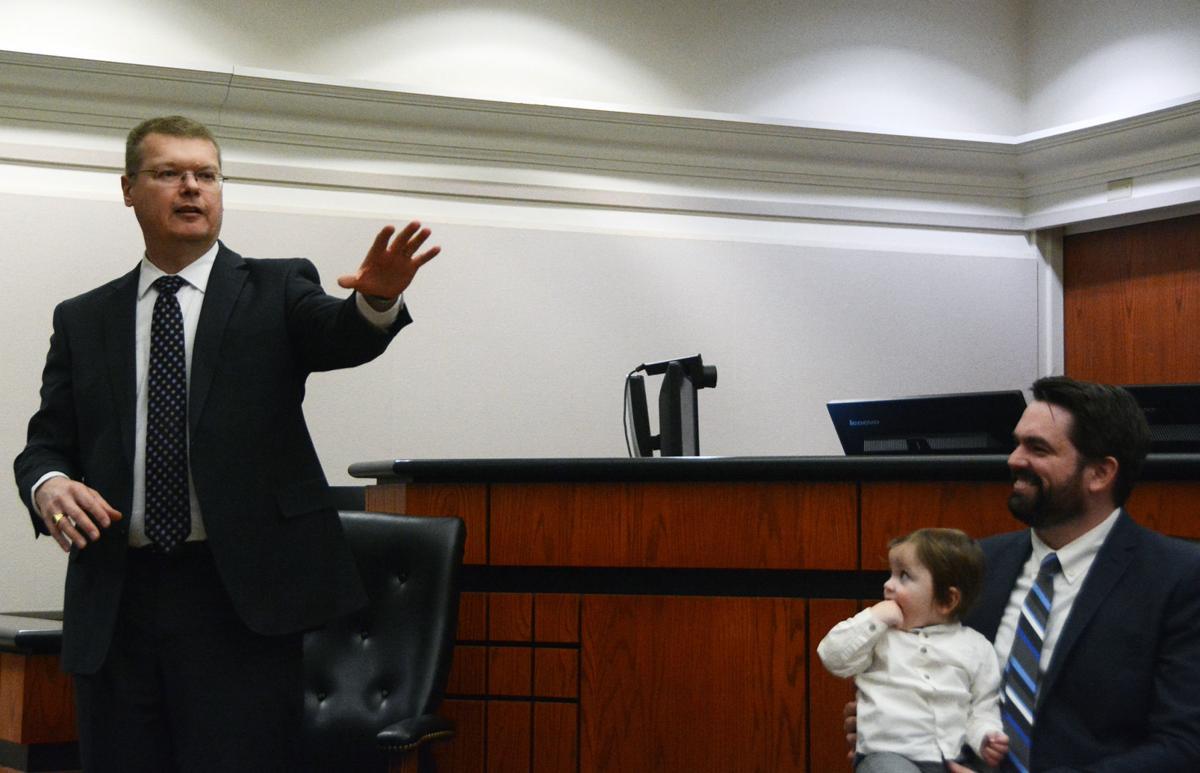 Sauk County Circuit Judge Michael Screnock jokes while giving a speech about newly appointed District Attorney Mike Albrecht as he sits with his son, Henrik, during a swearing-in ceremony Friday at the county courthouse. 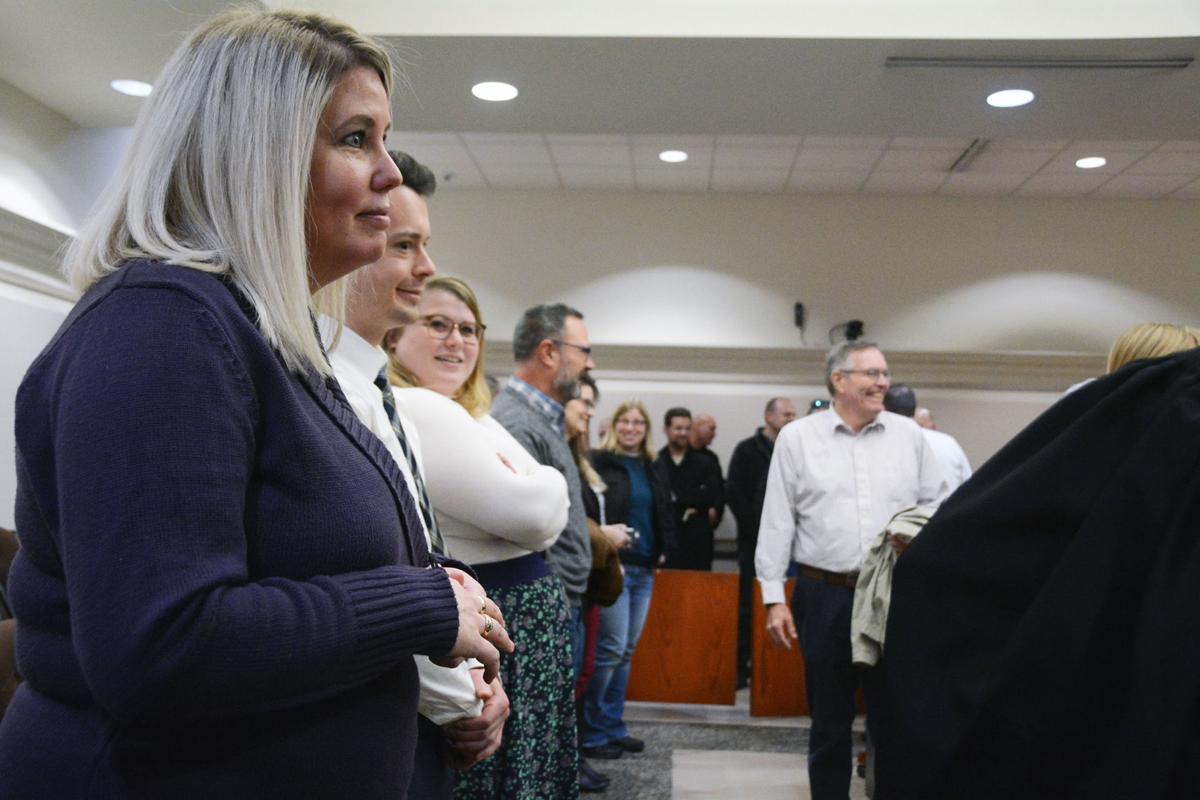 Michael Albrecht wasn’t born in Baraboo, but he has always felt like it’s where he’s meant to be.

The 2003 Baraboo High School graduate moved to the city when he was in sixth grade. In 1996, the area was new. Now it is a home he doesn’t see ever leaving.

And on Friday, in Branch III of the Sauk County Courthouse where he has spent the last eight years as a member of the district attorney’s office, Albrecht was sworn in as the newly-appointed district attorney.

“I’m thrilled to be able to stay here,” Albrecht said. “This was my ideal — being in this office, in this county, and a lot of people don’t get that. They’re not lucky enough to be exactly where they want to be.”

Albrecht has lived in other places and has traveled to Europe. He went to the University of Wisconsin-Madison, first to gain a bachelor’s degree while triple majoring in history, political science and Russian.

But even as he was counted as a Madison resident, he frequently returned to the area, spending summers with family members. Even when he enjoys experiencing new places, Albrecht said it’s good to come home.

After securing a bachelor’s degree, he gained entry to UW Law School.

“I didn’t really know what I wanted to do,” Albrecht said, reflecting on his early tenure at law school.

A fascination in criminal law didn’t mean he was capable of being a trial lawyer, but Albrecht said he was fortunate enough to take a job as law clerk in Sauk County, learning from those around him.

“I had the opportunity to see this office work in this county,” Albrecht said.

He took a job after graduation, turning down other opportunities to stay in Baraboo and work for free for a short time while gaining experience. Sauk County Circuit Court Judge Patricia Barrett was the one to give him the job as assistant district attorney.

“She gave me a chance,” Albrecht said. “They took a chance on someone who didn’t have any experience and I’m grateful for that.”

For Albrecht, criminal prosecution has a high priority over other avenues of law.

“Criminal law deals with liberty and justice and things that matter for everybody,” Albrecht said. “It almost feels cliche to say it, but every other type of law, to me, just seemed less important.”

Barrett swore Albrecht into office Friday in Branch III of the courthouse as he held his infant son in his left arm. Two benches and the jury box were crowded with guests as they watched the ceremony.

Sauk County Chief Judge Michael Screnock credited Albrecht during the event for his work in court.

“I am very pleased Gov. Evers saw fit to appoint him to succeed Kevin Calkins as our district attorney,” Screnock said. “What I’ve observed from Mike is a couple of things important to the court. He is always prepared. He really honors the law.”

Screnock said Albrecht takes fairness “seriously” and noted he was confident in the new district attorney’s ability to lead a team of prosecutors with that view.

Albrecht said he felt humbled when he received the news he’d been chosen after applying for the appointment. The process included two interviews and procuring recommendation letters from judges and the former district attorney.

“I never thought I was entitled to the job, and so, I was very grateful to have the opportunity,” Albrecht said. “But I also fully recognize it’s a big responsibility. I was certainly thankful.”

Appointed by Evers to replace Calkins, who joined the Columbia County District Attorney Office as an assistant district attorney in October, Albrecht will serve as district attorney until November 2020. He will then have a chance to have voters decide if he should have an extended term.

But the 34-year-old Albrecht doesn’t plan to go anywhere, and has set down roots with his wife, Erin, and 11-month-old son, Henrik. Albrecht said his passion for criminal law makes it simple to invest in the job and his community.

“Criminal law dealt with the most important ideals and being able to work in that system is really a privilege,” Albrecht said. “It’s stuff that matters, and it matters to people whether you have money or not. It makes it easy to come to work every day and care about what you’re doing.”

Gov. Evers’ appointment of Michael Albrecht fills the vacancy created by the resignation of Kevin Calkins

Mike Albrecht takes the oath of office as the newly appointed district attorney with his son, 11-month-old Henrik, as he is sworn in by Sauk County Circuit Court Judge Patricia Barrett during a ceremony in November at the Sauk County Courthouse.

Sauk County Circuit Judge Michael Screnock jokes while giving a speech about newly appointed District Attorney Mike Albrecht as he sits with his son, Henrik, during a swearing-in ceremony Friday at the county courthouse.