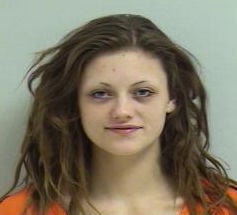 According to the criminal complaint, the pair allegedly stole bags from visitors staying at the Great Wolf Lodge and Kalahari Resort between April 2 and May 8.

Great Wolf Guests first reported their items being stolen around 11 a.m. April 2. Five people said that their bags containing personal items, cash and debit cards were taken from a specific area while owners were at the waterpark. Some were found in nearby trash cans, while others like car keys and money, were reported missing.

Roughly two hours later, callers also reported that their items were stolen from the waterpark at Kalahari. A security officer gave officers the license plate number of people suspected of the theft. Other people called after discovering their items missing, like a woman whose Air Pods, clothing, car keys, $100 in cash and two purses were stolen while they were at the waterpark. Another said $500 in cash, car keys, license, and glasses were taken.

Security cameras also produced a photograph of the people suspected of stealing. Footage allegedly shows Gottschalk and Garrison entering the Great Wolf waterpark and grabbing red life jackets, using them to hide the bags as they walked around taking items.

An officer identified Garrison through booking photos from the Marquette County Jail, noting a distinctive “K” tattoo on his right temple. The license plate number was traced to a Portage resident, who told police May 27 that Garrison had been driving her silver Ford Fusion. The woman identified Gottschalk in security photos.

Man flees officers after allegedly attacking another outside Ho-Chunk casino