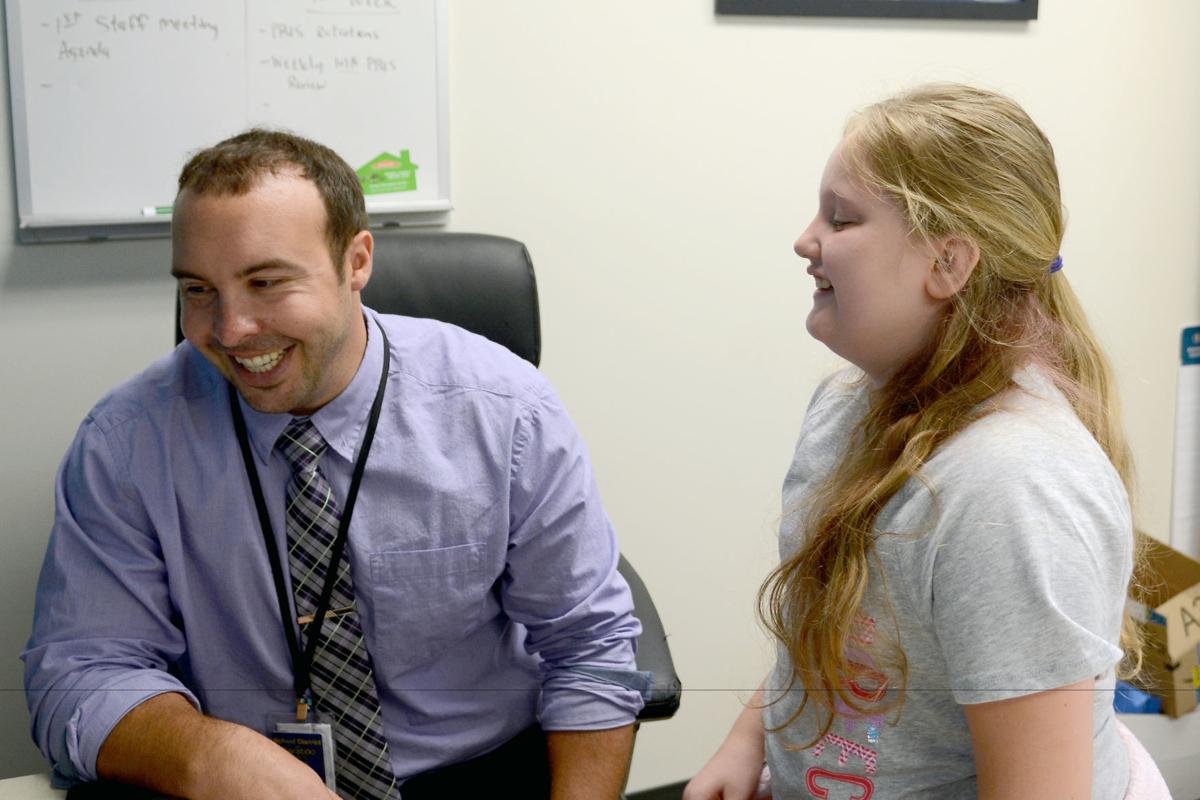 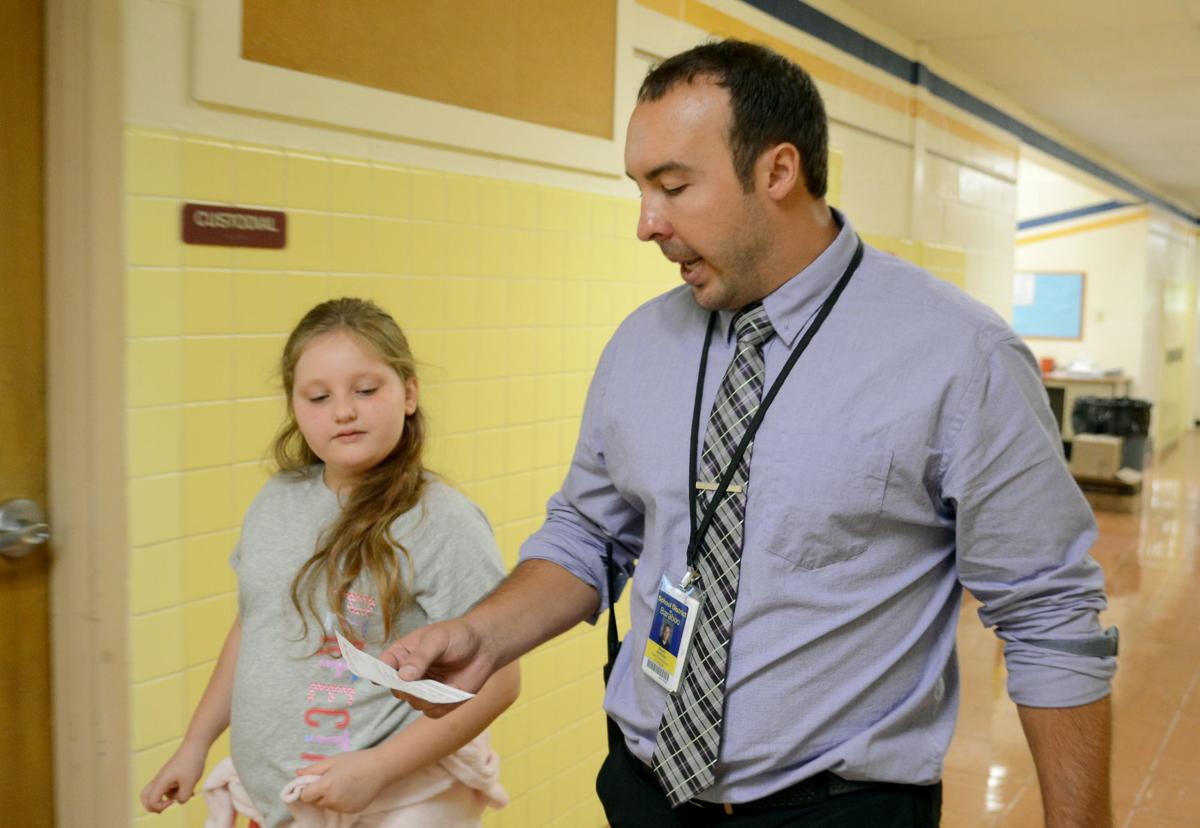 Bryan Ashbeck, the new principal at East Elementary School in Baraboo, reads to third-grader Karma Murray the reasons her teacher nominated Murray for recognition Thursday morning at the school.

On his third day leading a school full of students Thursday, Bryan Ashbeck plucked Karma Murray from class to bring her to his office — not for discipline, but for a “good news call.”

“I didn’t even know this was going to happen,” the third-grader said with excitement on the walk to the principal’s office.

Ashbeck, East Elementary School’s new principal, called Murray’s grandmother on speakerphone — with Murray positioned next to him — to tell her “how awesome you are and how awesome you’re doing,” he told Murray.

She was the first student to receive the recognition this year, but Ashbeck said it will be a daily part of his job that will help him build relationships with students, especially those who may benefit from a little extra positivity. As an added bonus, his office won’t be associated solely with discipline.

“I’m honored to be in this position because it’s something that I’ve really been passionate about for a long time,” Ashbeck said. “I’ve always wanted to be a principal … and to be able to do that in Baraboo is really special for me.”

He taught fifth grade for four years at Gordon L. Willson Elementary and spent another four teaching a range of subjects, providing tech support and fulfilling other duties at Jack Young Middle School. He also worked with special education students at Willson Elementary.

That experience prepared him for an administrative role, he said, by providing a “well-rounded” background. He credited the district’s mentorship programs for helping him reach this position.

“It’s really been a great experience in Baraboo, and they’re really focusing on building capacity with our staff and teachers, and putting teachers in those coaching roles really helped develop the next set of leaders that we have here,” Ashbeck said.

Keep reading for FREE!
Enjoy more articles by signing up or logging in. No credit card required.
Log in Sign up {{featured_button_text}}
Education

His first few days on the job have been both “a whirlwind” and “very smooth,” thanks to East’s experienced faculty and support staff, Ashbeck said. His wife, Alisha, taught at East for six years but now teaches at the middle school.

He noted the importance of working as a team with his staff and listening to their ideas about how to best serve students. Though he’s leading the school, his approach is not “top-down,” he said, adding that he’s fortunate to have a “phenomenal” staff.

“I’m really excited that I’ve had a veteran staff to really come into this role and have support the school-wide structure, because it’s not a one-person job,” Ashbeck said. “It’s an everybody and all-in type deal.”

District Administrator Lori Mueller said Ashbeck has shown an ability to coach teachers and he has a strong background in literacy instruction, which the district prioritizes in elementary administrators. In addition, his experiences at the elementary and middle school level gave him the skills to “serve us well,” she said.

“I think he will be a fantastic addition to East Elementary,” Mueller said.

Ashbeck plans to communicate with families as much as possible during his time as principal, putting an emphasis on making connections. Another focus will be on equity and ensuring all students — regardless of which elementary school they attend within the district — are getting the same education, he said.

One way he’s doing that is with the “good news calls,” like the one Murray got. They are part of a district-wide effort to promote positive behaviors among students, Ashbeck said. It includes a coupon system that rewards elementary school students who model respectful, responsible and safe behaviors.

“He’s really strong at developing relationships with staff, students and the community, so it was really quite easy and we were thrilled to select him for this position,” she said.

Teachers often can tell when a student is hungry.

Bryan Ashbeck, the new principal at East Elementary School in Baraboo, reads to third-grader Karma Murray the reasons her teacher nominated Murray for recognition Thursday morning at the school.