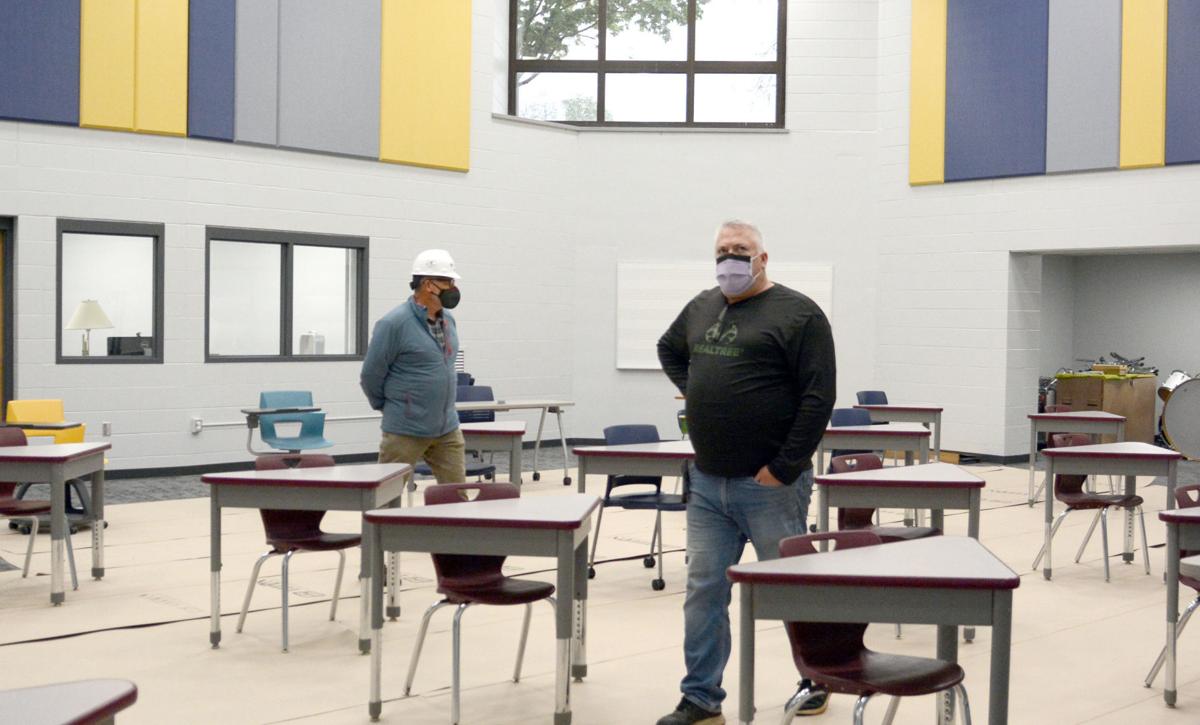 Baraboo School Board members Mike Kohlman, left, and Kevin Vodak tour the newly finished band room Monday at Jack Young Middle School in Baraboo. The room is currently set up with the new carpet temporarily covered and desks distanced for learning during the coronavirus pandemic. 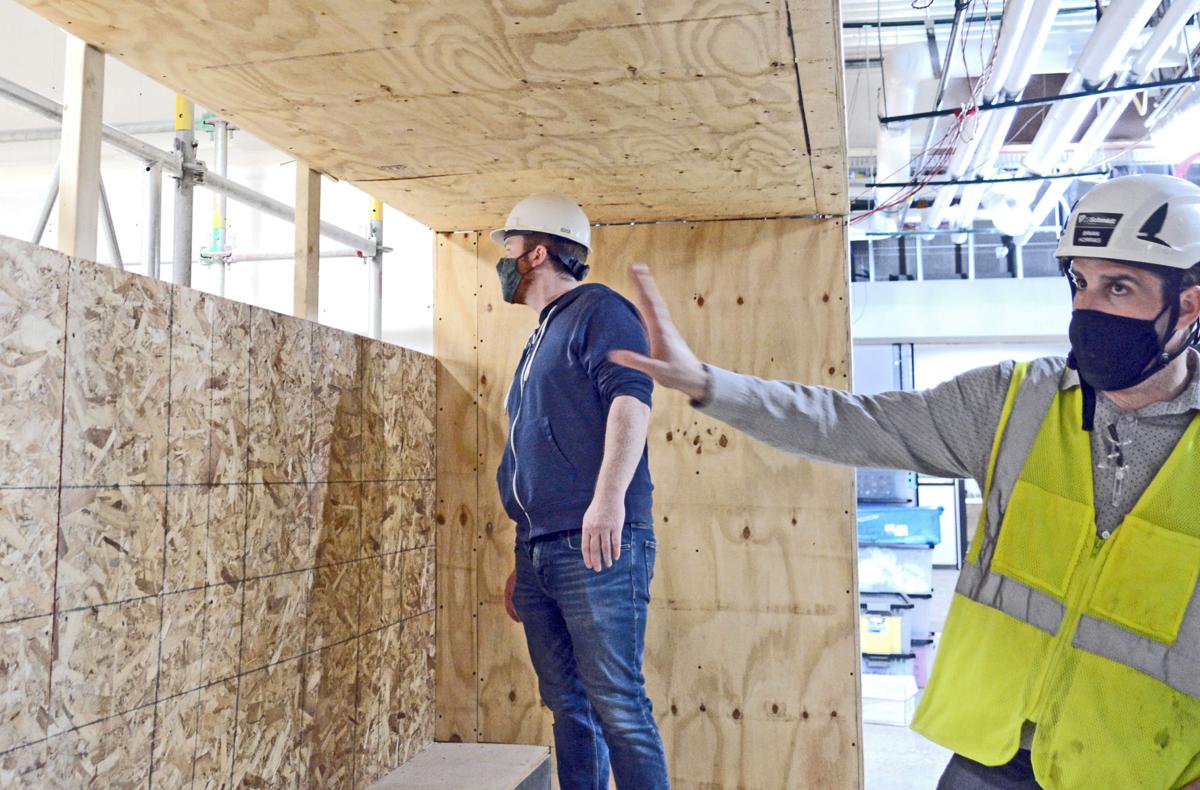 Baraboo School Board member Alex Schenck, left, looks through a window above the new central stairs from the entrance corridor at Jack Young Middle School as Construction Manager Brian Horras describes how the space will look when it's finished during a board tour Monday night in Baraboo.

Brian Horras, construction manager from CG Schmidt, said his workers have been able to get into many spaces they weren’t expecting this early, thanks to the flexibility of Jack Young Middle School’s administration, staff and students, which means they will have less to do over the summer.

“They’ve saved the district a lot of money by being so flexible,” Horras said Monday at the end of a school board tour of the building.

But because not everything can be moved up in the timeline, the $41.7 million renovation and addition will be finished right before students return this fall, the same as previously planned, Horras said.

The band room, which wasn’t supposed to be started until summer, is already done, along with the adjacent practice rooms and jazz ensemble room. Staff have already moved into the new student services area, now located next to the front office and featuring “acoustical rooms” to block noise when a student is having an outburst. The auxiliary gymnasium and some academic spaces are also completed.

Lockers are mostly installed, and demolition of the old kitchen has begun. Crews have been framing, pouring concrete and installing steel for the new “monumental stairs,” which replaced the old ramp, over the past several months and they will be taking down scaffolding next week, Horras said.

Prior board tours already revealed the new commons area and library.

Horras said project leaders recently commissioned the Little Eagle Arts Foundation to create a Ho-Chunk cultural art installation about the history of the thunderbird for the school’s new entryway.

Alex Schenck, a Baraboo School District alumnus who was recently elected to the school board, walked through the building Monday for the first time since construction began last spring. He was a student at Jack Young “a long time ago,” he said, and called the changes “an upgrade.”

The project is under budget, allowing the team to put the savings toward items that weren’t initially included, such as repaving the front parking lot, according to Horras.

District Administrator Lori Mueller will offer tours of the construction to any groups in the Baraboo community. Interested parties can call the district office at 608-355-3950 or email Mueller at lmueller@barabooschools.net.

She said the district offered the same opportunity a few years ago when the high school was renovated, and now that the school year is winding down, “I just want to start getting it on people’s radar.”

“It belongs to the community,” Mueller said of the school.

Baraboo School District officials and a handful of other people toured the construction at Jack Young Middle School Dec. 7, seeing an almost f…

Construction crews have started work at Jack Young Middle School in Baraboo, while the project recently expanded to include a new outdoor lear…

School board members and the public got their first peek, albeit a virtual one, at the Baraboo middle school’s construction project Tuesday as…

After its renovation, Baraboo’s middle school will feature a wall of windows looking into its commons and a circular stairwell to replace the …

The Baraboo School Board’s outreach efforts appear to have paid off — its aging middle school soon will be renovated and expanded, as voters a…

Baraboo School Board members Mike Kohlman, left, and Kevin Vodak tour the newly finished band room Monday at Jack Young Middle School in Baraboo. The room is currently set up with the new carpet temporarily covered and desks distanced for learning during the coronavirus pandemic. 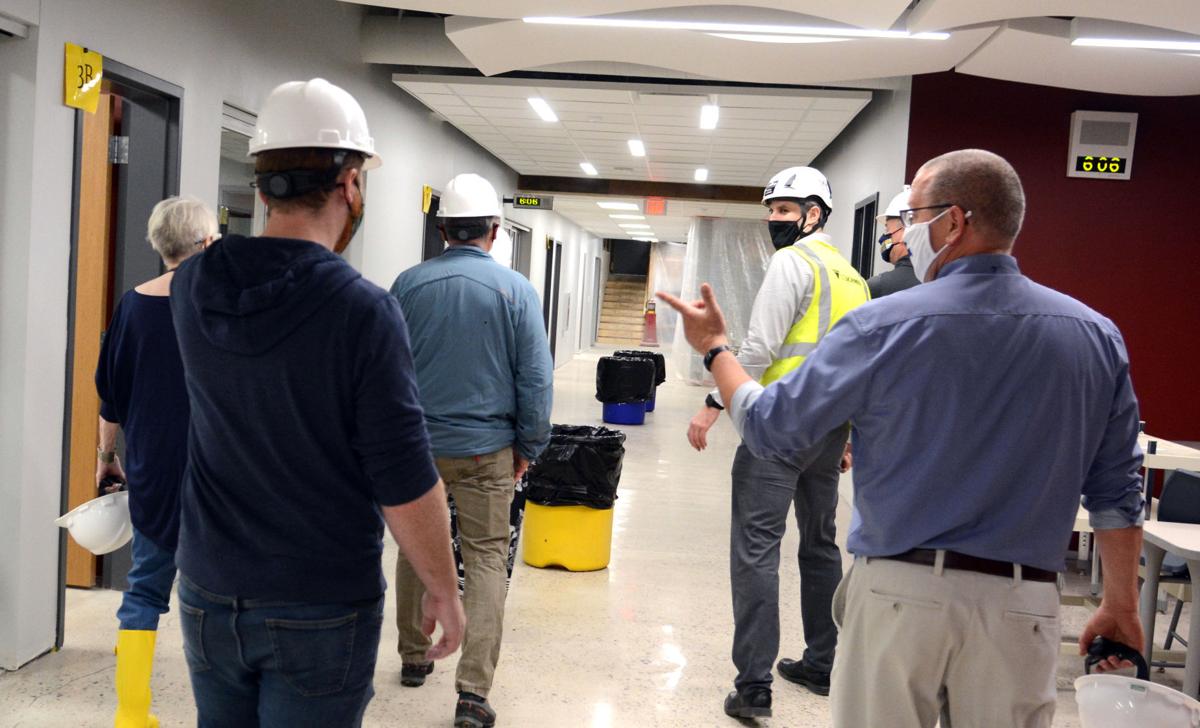 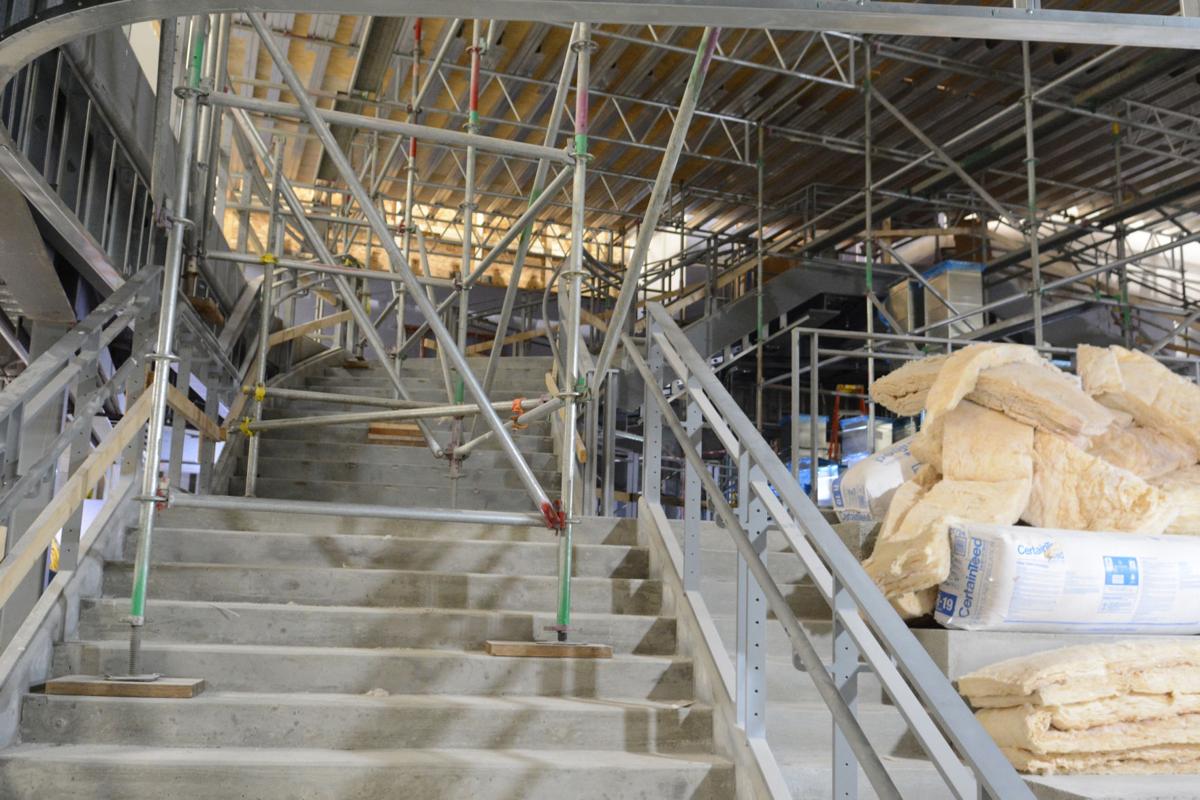 Scaffolding remains on the new monumental stairs Monday at Jack Young Middle School in Baraboo but will be removed next week as construction continues. Crews have been framing, installing steel and pouring concrete to create the stairs, which replaced a ramp, over more than seven months.

Baraboo School Board member Alex Schenck, left, looks through a window above the new central stairs from the entrance corridor at Jack Young Middle School as Construction Manager Brian Horras describes how the space will look when it's finished during a board tour Monday night in Baraboo.