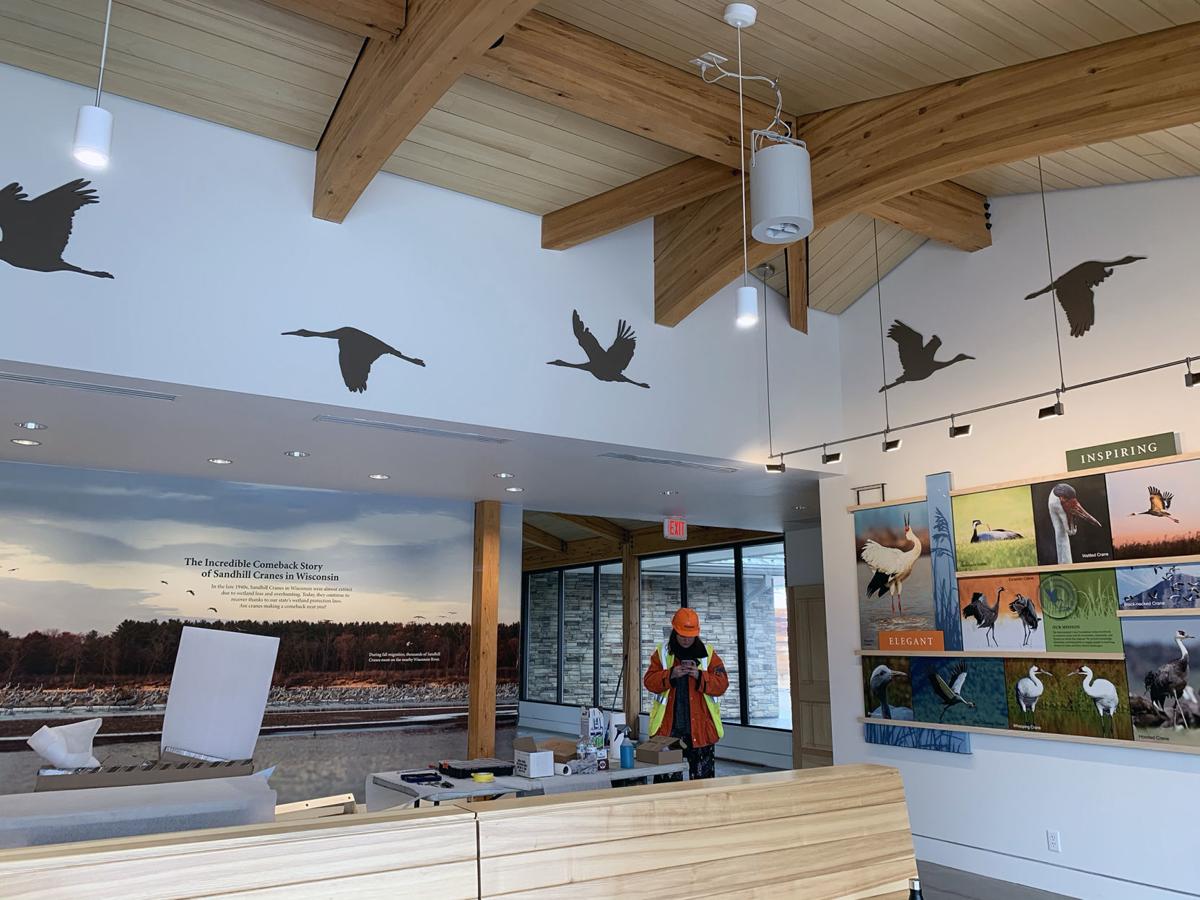 The International Crane Foundation's new George Archibald Welcome Center in Baraboo, pictured March 11, introduces visitors to all 15 crane species and features a 26-foot-long mural of the sandhill cranes that rest along the Wisconsin River each fall. The site's grand opening has been delayed due to the COVID-19 crisis. 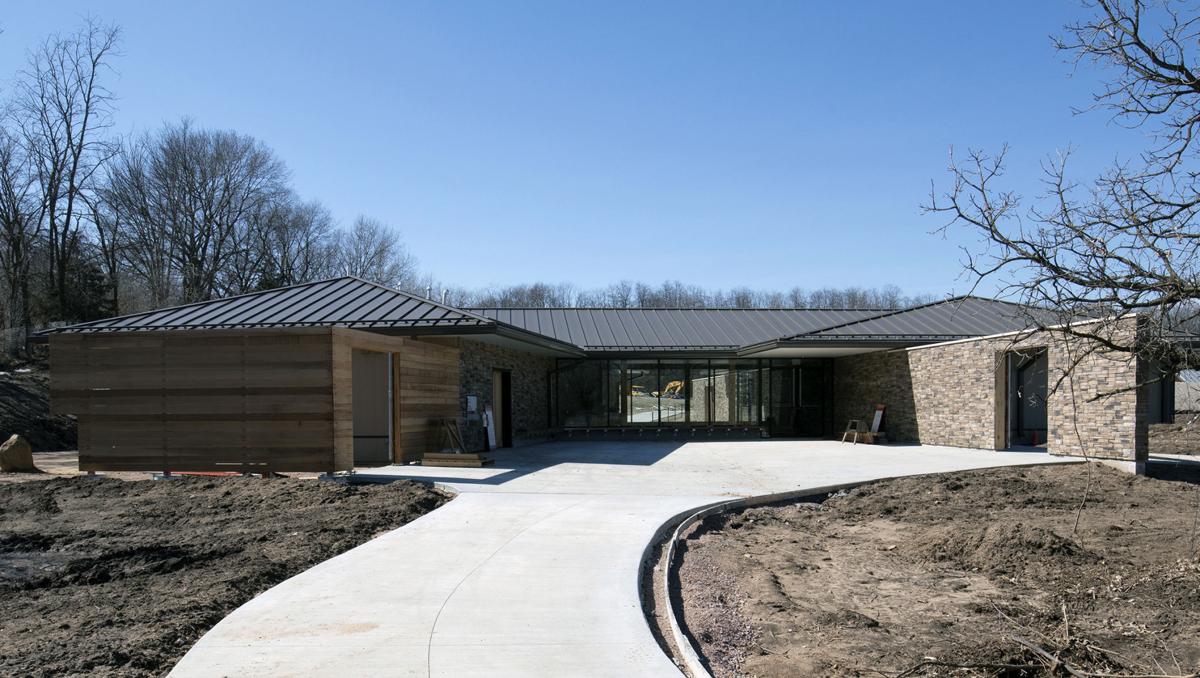 The International Crane Foundation's new George Archibald Welcome Center in Baraboo, pictured March 13, will feature a theater, an indoor sandhill crane viewing and education area and a gift shop. The site's grand opening has been delayed due to the COVID-19 crisis. 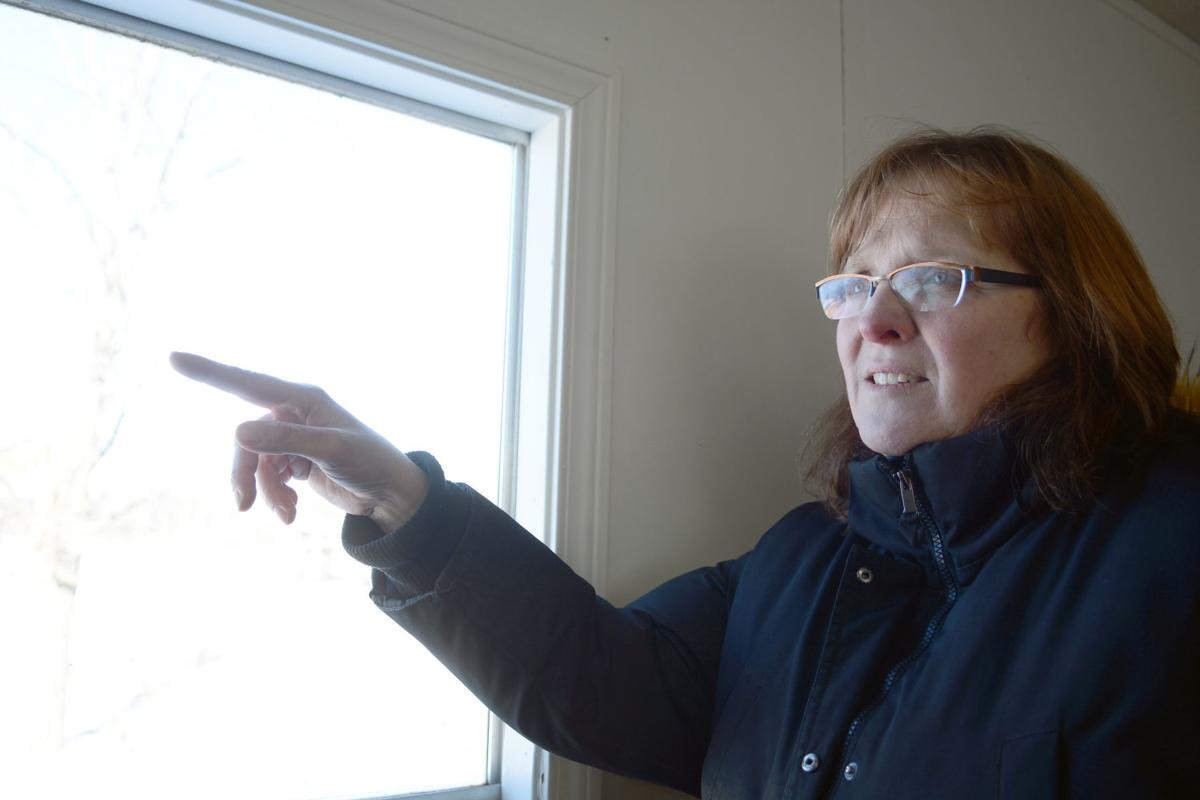 International Crane Foundation Chief Operating Officer Kim Smith points out the construction site Feb. 8, 2019, through a window in the Vogel Bros. Building Co. trailer at the Baraboo wildlife center. The site's grand opening, set for this summer, has been postponed due to the coronavirus pandemic.

With teams across the world, the International Crane Foundation had to adapt to the threat posed by the novel coronavirus much earlier than other Baraboo-based organizations.

The pandemic’s spread led leaders to postpone the wildlife center’s grand opening, planned for this summer to reveal the results of a $10.4 million renovation project.

No staff members had to travel to the U.S. when travel restrictions were put in place, but ICF President and CEO Rich Beilfuss said one of ICF’s wetland ecologists who lives in Zambia was in Belgium studying for his doctorate when European countries started to close their borders.

“Things just happened so fast,” he said. “We did get him back home to his home in Zambia, but within about a day of our being able to transport him, so it was really, really close.”

Now that isolation measures are easing in China, the team is “just breathing fresh air” after more than two months of heavy confinement, Beilfuss said. The team is offering advice to their colleagues in Baraboo and Africa on how to get through stay-at-home orders that started in Wisconsin on March 25.

“There’s a burst of excitement and energy about doing field work now for the wild cranes and wetlands in China,” Beilfuss said.

He said his teams in China are at least several hundred miles away from Wuhan, the city originally at the center of the coronavirus pandemic.

About 20 staff members in 10 African countries are in various levels of lockdown, with some countries still not imposing stay-at-home orders, Beilfuss said. ICF stopped its community programs in places like Uganda, Kenya, Zambia and South Africa early on, because an outbreak would be too risky for poor, rural communities with few doctors and no health care system, he said.

“I’m pretty sure the cranes will keep migrating without us, at least for a while,” Beilfuss said, laughing. “Eventually we’ve got to get in there and worry about their habitat, and obviously there’s real challenges to cranes and that’s why they’re endangered around the world, but we know they’ll keep going for a while and we’ll just get back in as soon as we can.”

The organization has committed to keeping all of its employees and continuing to protect cranes and their habitats, said Chief Operating Officer Kim Smith. She said ICF has an endowment it’s using as a reserve fund but is still hoping donations continue, though she recognizes that everyone is facing challenges with the public health crisis.

“We’re working really hard to keep everything going and keep our work going and be ready for when everything opens up,” she said.

ICF employs about 50 people at its Baraboo headquarters, plus 24 interns each year, according to Beilfuss.

While researchers can’t work in the field, they’re still doing data analysis and other things related to their research on cranes from home.

To protect its crane care team, ICF transitioned most of its staff to working from home before Gov. Tony Evers issued the “safer at home” order. Smith said ICF was well-equipped for remote work because it already does a lot of telecommuting as a global organization.

“We wanted to protect them (crane care staff) from potential exposure, because they are who we have to take care of the cranes, and that’s our highest priority,” Smith said. ICF also wanted to protect employees’ health, he said.

One of the four-person teams go in every day to feed the captive cranes, manage their health and clean up after them, Smith said. She said two rotating teams work on different days to make sure if one becomes infected, another remains unexposed and can continue caring for the cranes. The ICF is training two more backup teams and is keeping its veterinary staff on call to avoid potential exposure in case they’re needed in an emergency. Essential staff, which includes crane care teams and facilities teams, are also practicing social distancing and will be using masks while working on site, Smith said.

The wildlife center was planning a grand opening for its Baraboo headquarters on June 27 after more than a year and a half of being closed to the public for extensive renovations. It includes a new visitor center and revamped exhibits for on-site birds. Leaders decided this week to postpone the reopening until further notice.

“We want to be respectful of the safety of our community, so we’ve decided just to delay the grand opening until we know more,” Smith said.

She said construction is almost done but the emergence of COVID-19 slowed progress on the finishing touches.

“We’re really excited about when the site is able to open, because it’s just going to be gorgeous and people are going to love it,” Smith said. “We’re just hoping that at some point, whenever we’re able, we can open it at least to our community so they can come and have something pleasant and inspiring to do after all of this darkness.”

ICF also decided to cancel its annual Midwest Crane Count for the first time ever, Smith said. The organization usually asks volunteers to venture outdoors and count the number of sandhill cranes they see, a 45-year-old tradition that helps researchers understand the area’s crane population.

“It was really disappointing because it’s a favorite activity for all of us, as well ... but we felt that even though they’re encouraging people to get outside, for us to sanction something that could gather groups — we just didn’t feel right about that,” she said.

People who can count birds from their own property can still submit numbers, she said.

In the meantime, ICF’s education and outreach team is working on ways to engage the public from the safety of their homes, including with crane-themed activities for children.

A blog series geared toward children, Quarantining with Cranes, is available on ICF’s website, savingcranes.org.

“From the Field,” a webinar series, will share research and other crane and conservation information, according to ICF spokeswoman Pamela Seelman. Those can be viewed from links on the organization’s social media pages, its website and other communications. ICF will also experiment with Facebook Live webinars and Instagram stories.

“We’re here for the community and we’re trying to get some things out on cranes” to give people something to do while in isolation, Smith said. “We’ll get through it.”

The International Crane Foundation will close for more than a year to complete $10 million in renovations to its Baraboo headquarters.

As the International Crane Foundation continues its efforts to build the whooping crane population, a trio of the birds lived in the wild near ICF headquarters this year, the first time members of the endangered species has spent a summer in Sauk County.

The Aldo Leopold Foundation is releasing a new edition of "A Sand County Almanac" this month in conjunction with the 50th anniversary of Earth Day and just four years ahead of the book’s 75th anniversary.

After a year on pause, a Baraboo-based wildlife center resumed its captive breeding program this spring, heralded by the arrival of a whooping…

The International Crane Foundation's new George Archibald Welcome Center in Baraboo, pictured March 11, introduces visitors to all 15 crane species and features a 26-foot-long mural of the sandhill cranes that rest along the Wisconsin River each fall. The site's grand opening has been delayed due to the COVID-19 crisis.

The International Crane Foundation's new George Archibald Welcome Center in Baraboo, pictured March 13, will feature a theater, an indoor sandhill crane viewing and education area and a gift shop. The site's grand opening has been delayed due to the COVID-19 crisis.

International Crane Foundation Chief Operating Officer Kim Smith points out the construction site Feb. 8, 2019, through a window in the Vogel Bros. Building Co. trailer at the Baraboo wildlife center. The site's grand opening, set for this summer, has been postponed due to the coronavirus pandemic.