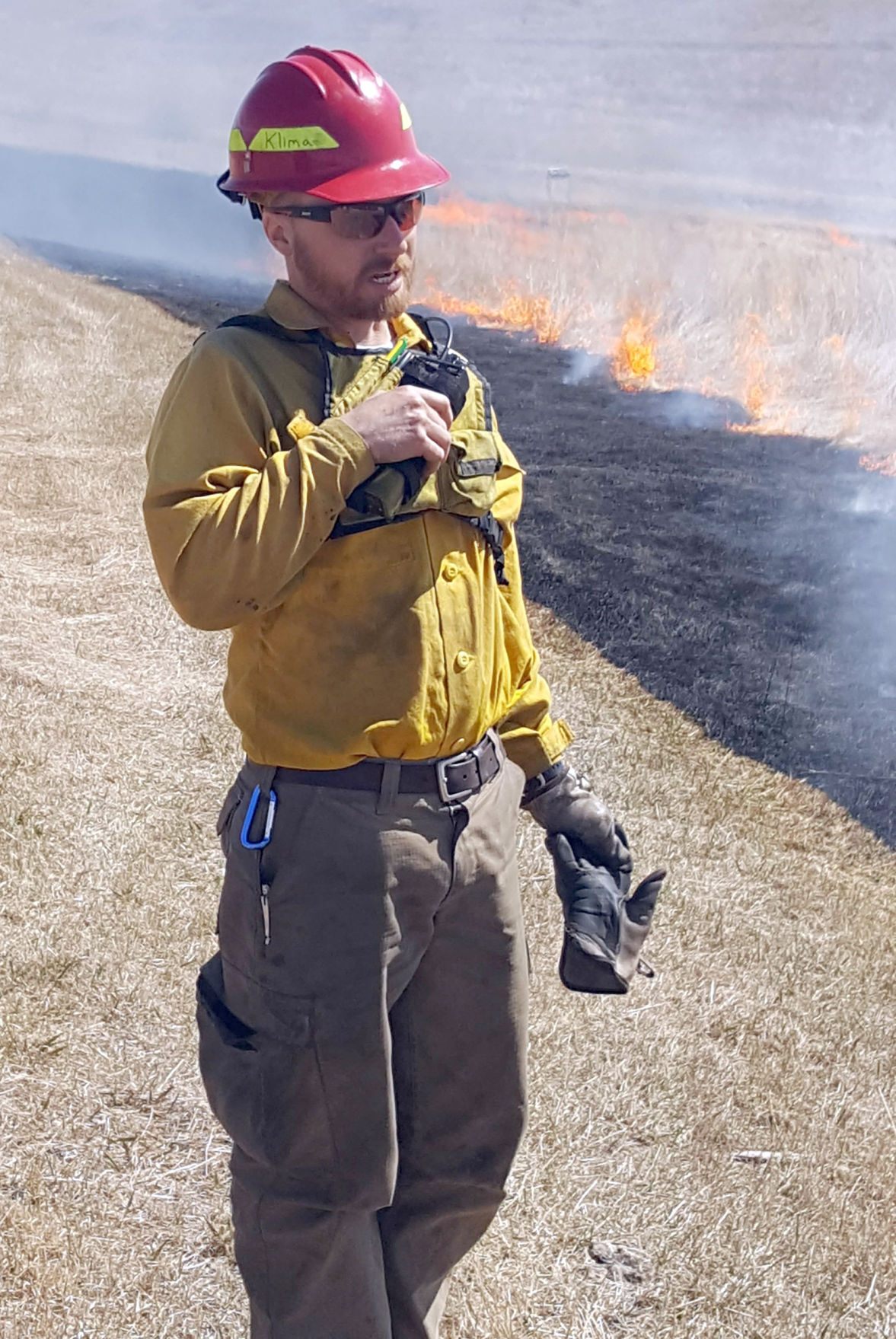 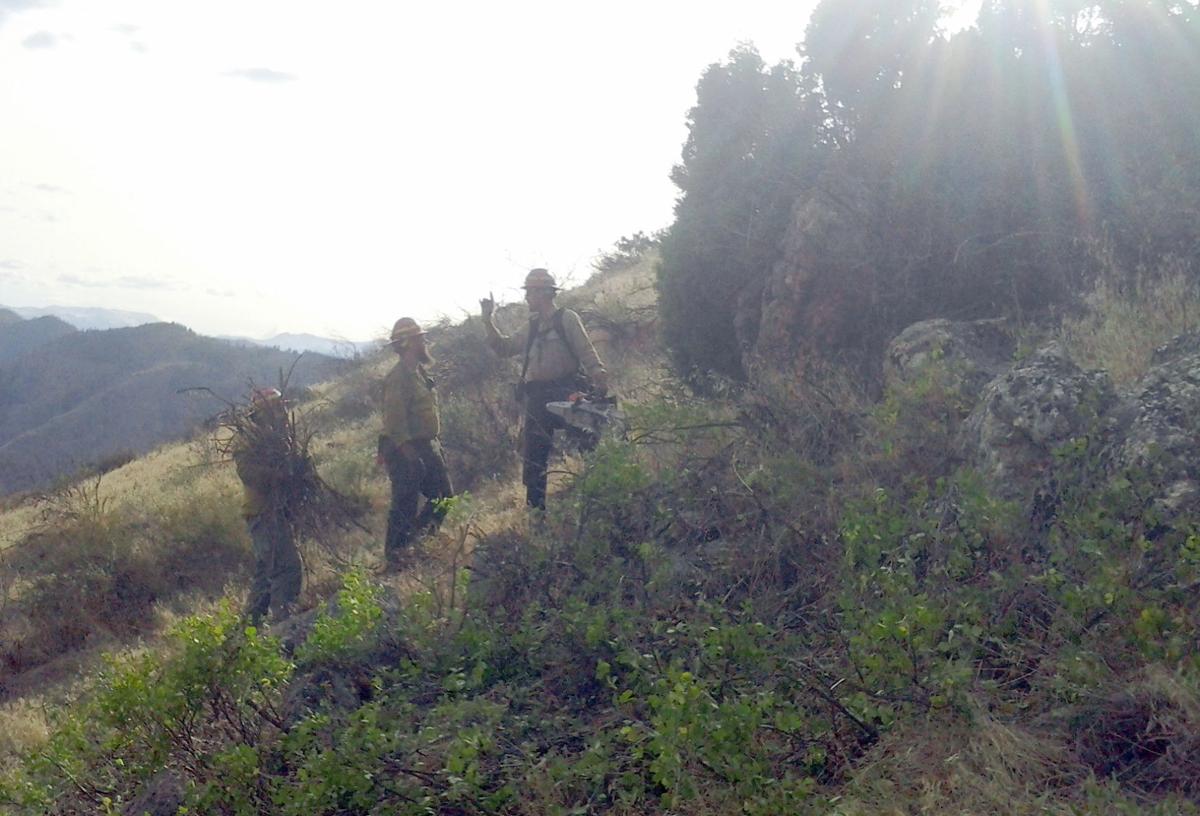 Members of a Wisconsin-based fire crew, including Caleb Klima of Baraboo, help Colorado firefighters with efforts to contain the Cameron Peak fire in September near Fort Collins. 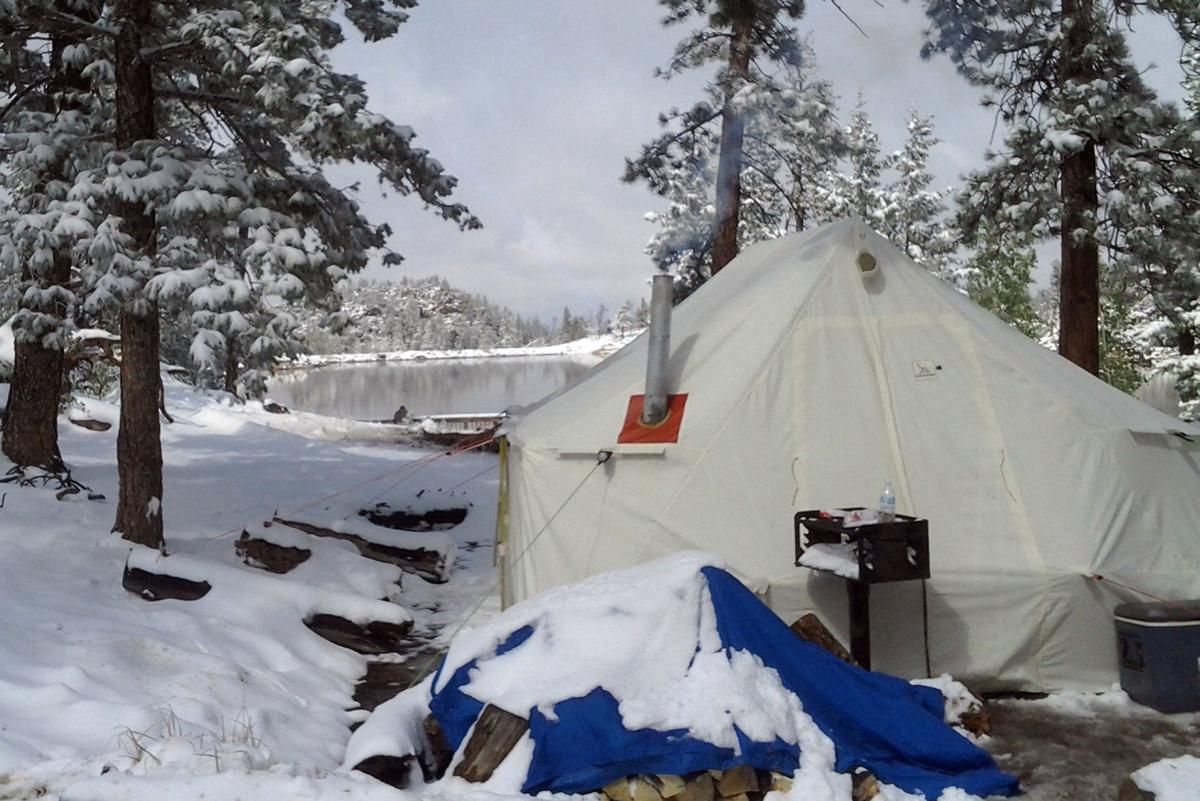 Snow dampened the Cameron Peak wildfire's spread in Colorado while Baraboo resident Caleb Klima was there in September helping to fight it.

While Baraboo resident Caleb Klima was fighting a wildfire in Colorado last month, he knew his work would not only help residents there but also would help him build upon his skills for managing “good fires” in Wisconsin.

A land manager for the Nature Conservancy, he oversees about 10,000 acres in the Baraboo Hills west of Devil’s Lake State Park. The oak woodlands and prairies are fire-dependent systems, so the environmental organization uses “good fires to stop the bad fire,” he said.

Klima, first trained in 2012, has been gaining experience and credentials every year by fighting wildfires in other states, like many Wisconsin firefighters.

From Sept. 4-19, the 33-year-old traveled with a crew of nine other people from various Wisconsin agencies to Colorado to assist in efforts to control the Cameron Peak fire near Fort Collins. Within his first three days, the fire grew from under 25,000 acres to more than 100,000.

“That was very extreme fire conditions,” Klima said. “When the fire becomes that volatile and large, there’s really not much firefighters can do at that point, so it was a lot of standing back and kind of waiting for opportunities, continuing to help with evacuations and structure protection, but even at that size, flying airplanes with retardant drops or helicopters can’t even do any of that work.”

As smoke threatened the residents of Fort Collins, they caught a break: A cold front and snowstorm helped firefighters gain some ground on containing the fire, though Klima emphasized that even those favorable conditions weren’t enough to put it out.

His group, tasked with protecting structures, assessed homes for safety issues, set up temporary sprinkler systems for them and created “fire breaks” over the next week by removing brush and bulldozing to expose dirt into containment lines meant to stop flames from advancing past them.

Their work involves thinking ahead and planning for contingencies, he said. The plans his crew helped lay have been tested, as the wildfire — Colorado’s third largest ever — surged again recently.

Betsy Thamert of Estes Park, Colorado, lives about 10 miles south of the Cameron Peak fire. Though her area has been spared evacuation orders and voluntary evacuations, she said smoke and ash have affected the air quality. Her family has been following daily updates and considering how to best protect themselves and their home for future wildfires, she said.

“The communities that have been impacted are so grateful for the firefighters from across the country that have come to help out,” she said, noting that the fire teams have been communicating very well with local residents and showing dedication by working long hours away from their families. “And they’re doing this all to help out. It’s incredible.”

“I take those skills and I come back and help teach that locally,” Klima said. “We try to put on classes locally to get more people certified, work with local fire departments to try to work with them on the wildland side of firefighting and not just structural, and just try to increase the amount of good fire ... in Wisconsin.”

Known as prescribed burns, those “good fires” typically remain low to the ground and are low intensity. They benefit some ecosystems by recycling nutrients back into the soil and reduce the chances of uncontrolled wildfires, Klima said.

He said the Nature Conservancy works with its various partners — the state Department of Natural Resources, other conservation groups and local landowners — to increase the area regularly burned. Studies have shown that based on this region’s history, millions of acres should be burned each year through prescribed fires, he said, adding that Wisconsin is “nowhere near that.”

Jed Meunier, a fire ecologist with the state DNR, does “historical fire reconstructions” to research how frequently lands burned, to what extent and during what season over the last 300-500 years. This area of Wisconsin burned frequently, he said.

Oak savannas, prairies and pine barrens — all native to the Midwest and “ecologically important” — are fire-dependent and survive burns, unlike invasive species that haven’t adapted to fire, Meunier said. He estimated those systems would have burned almost every other year historically. But centuries of European settlement, human development, invasive species encroachment, fire suppression and other causes have led to fewer fires and these ecosystems becoming endangered.

“So basically, it’s a thousand cuts. … We’ve snuffed fire out entirely, and the future of fire is going to depend on us lighting it,” Meunier said.

That aim is part of Klima’s job as land manager. He works to manage invasive species, bring back oak trees and write burn plans, among other duties.

“We’re trying to bring it (fire) back, and we’re trying to save these oak forests and allow them to regenerate,” he said. “If we did not do prescribed fire, they would disappear, as they have been across the eastern United States since European settlement.”

This fall’s Farm/Art DTour in Sauk County will go on as scheduled despite concerns about COVID-19.

While state parks gear up to reopen campgrounds Wednesday, private campgrounds in Sauk and Columbia counties have provided recreational opport…

For the first time ever, annual state park passes are available for purchase online.

The Aldo Leopold Foundation is releasing a new edition of "A Sand County Almanac" this month in conjunction with the 50th anniversary of Earth Day and just four years ahead of the book’s 75th anniversary.

The Sauk County Board of Supervisors has approved a four-year recreational plan, outlining the future development and needs of the county’s pa…

Members of a Wisconsin-based fire crew, including Caleb Klima of Baraboo, help Colorado firefighters with efforts to contain the Cameron Peak fire in September near Fort Collins.

Snow dampened the Cameron Peak wildfire's spread in Colorado while Baraboo resident Caleb Klima was there in September helping to fight it.