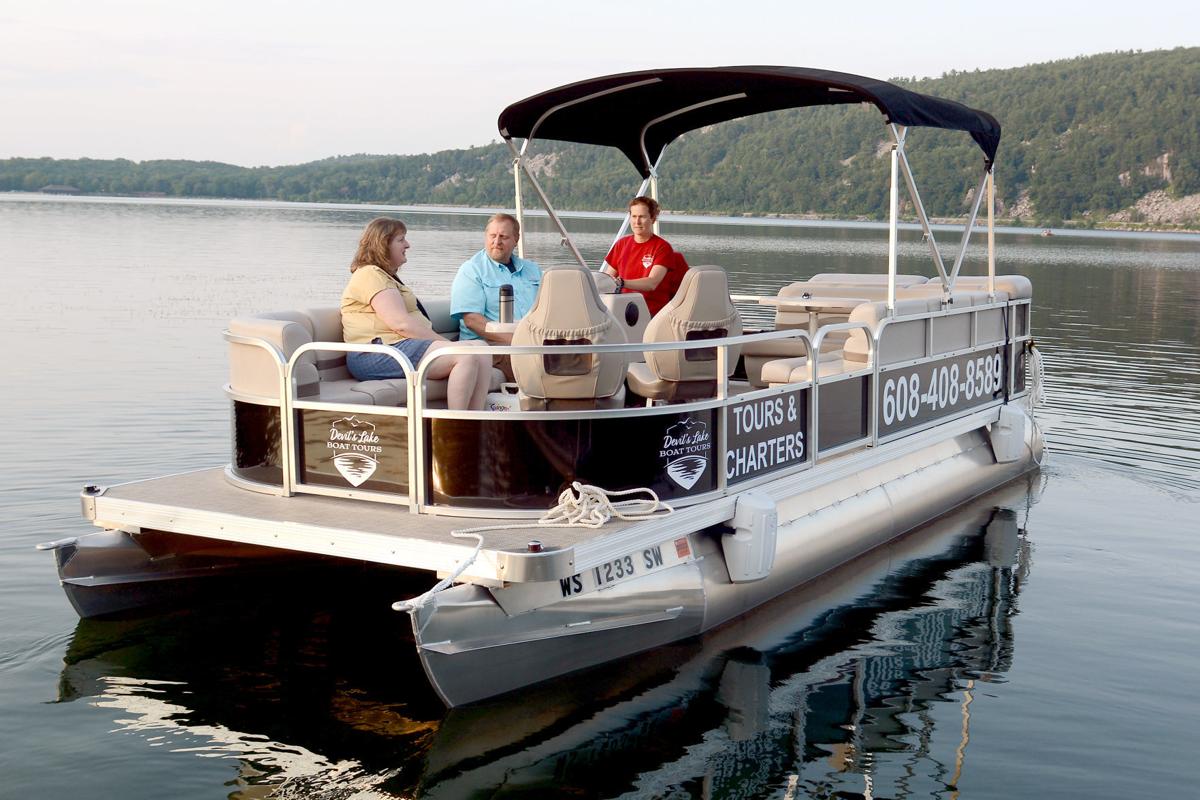 Jennifer King, left, and Kevin Craycroft set off Tuesday on a boat tour of Devil's Lake near Baraboo while business owner Katy Carter steers. The couple from Louisville, Ky., was visiting the area as part of a vacation to celebrate their 20th wedding anniversary. "It's beautiful, absolutely beautiful," King said. 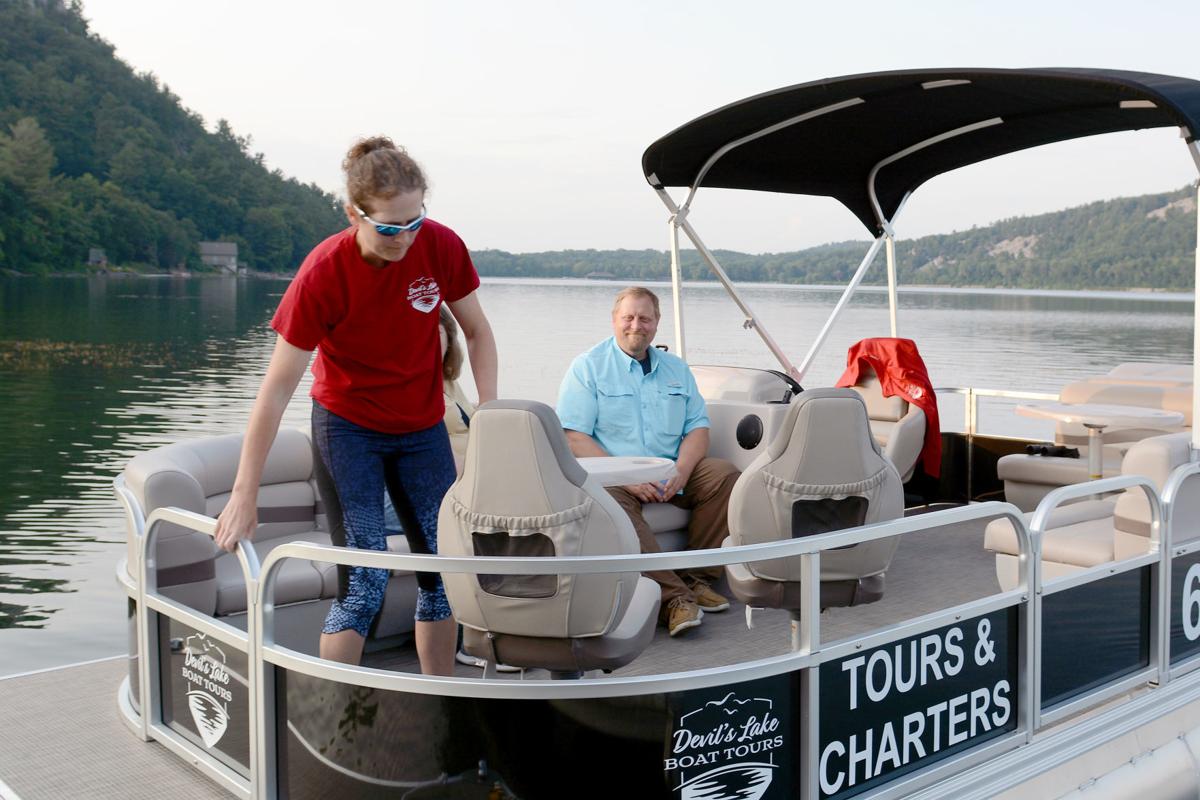 Devil’s Lake Boat Tours owner Katy Carter gets ready Tuesday to guide a tour for Kevin Craycroft and Jennifer King, both of Louisville, Ky., at the dock along the south shore. 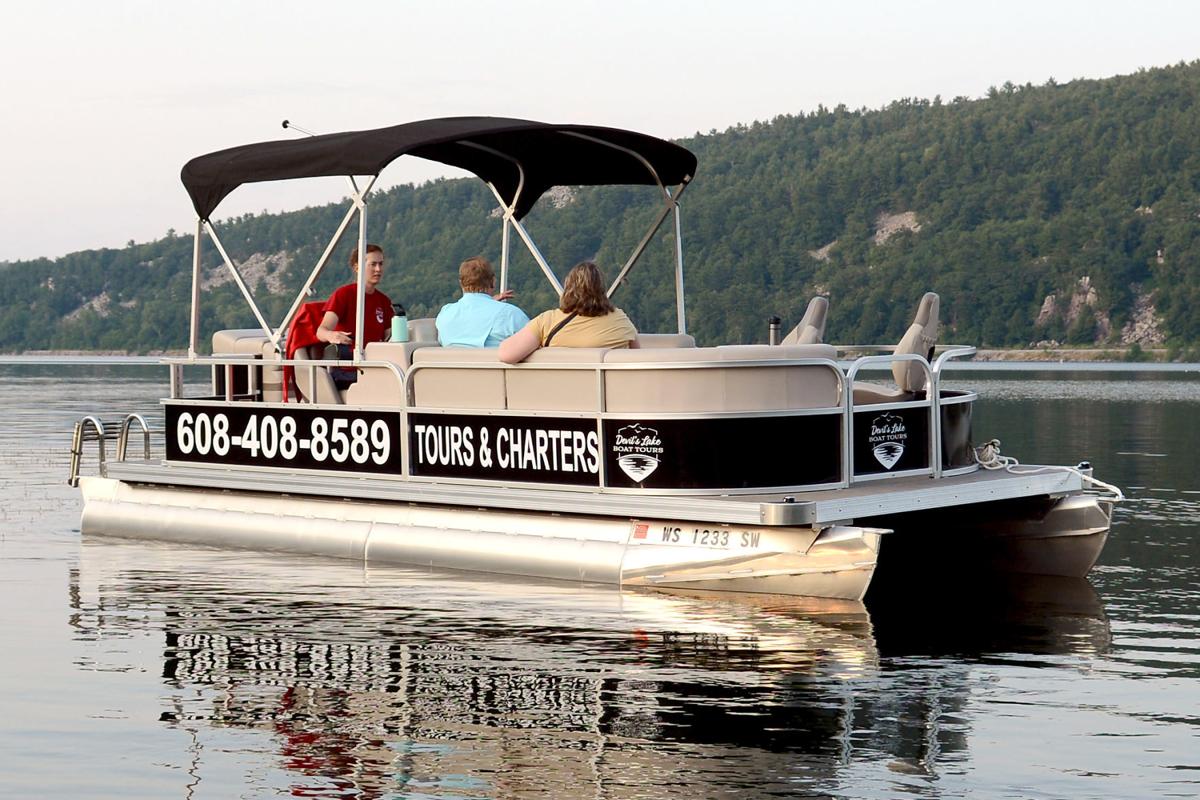 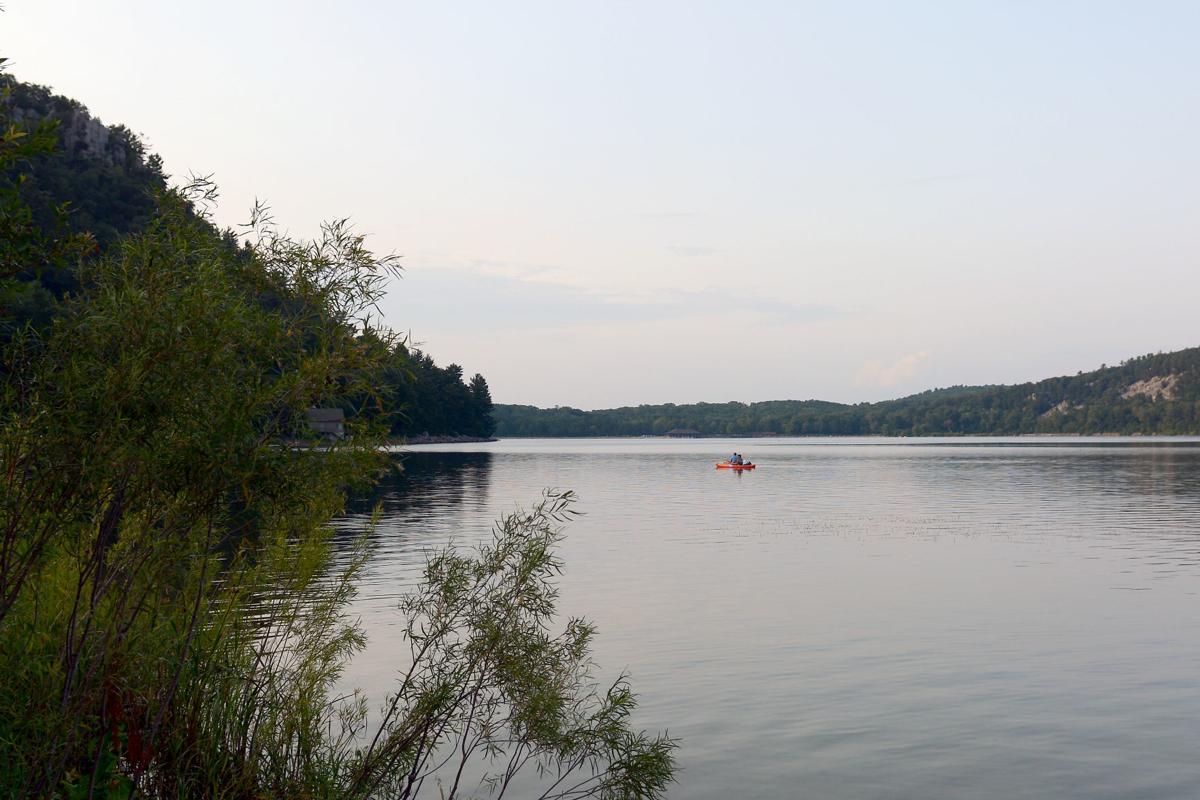 A pair of kayakers float Tuesday on Devil’s Lake near Baraboo.

No matter the location of the visit, boat tours almost always have been a feature of Baraboo business owner Katy Carter’s family vacations.

“They all have different experiences and different things that they can feature, and (I) kind of felt Devil’s Lake was lacking this,” Carter said, adding that she’s glad to bring boat tours to the area. “It’s another way for people to experience the park, especially those that are either unable to or don’t want to paddle” a kayak or other watercraft.

While going through college, she said she worked as a seasonal park ranger at Devil’s Lake for the summers of 2001 and 2002 and has been there ever since.

As the first of its kind at the park, her venture has not been without controversy — at least online. Posts by the company on the Fans of Devil’s Lake State Park in Wisconsin Facebook page garnered dozens of comments expressing distaste for it. Most wrote they didn’t want a motorized boat disrupting the park, while others objected to a private business monetizing the park’s resources.

Steve Schmelzer, park superintendent, said no one has complained directly to him about Carter’s venture but he has heard some people are concerned. He’s not aware of any other businesses like this having operated at Devil’s Lake — which draws between 2.5 million and 3 million visitors each year — at least during the 27 years he’s worked there.

The pontoon has an electric trolling motor, which is allowed on the lake. Gas motors are banned, and boats are required to travel at slow-no wake speeds, Schmelzer said. Carter noted her boat is “real quiet” and doesn’t cause a wake.

“Kayaks could probably go faster if they really wanted to,” she said.

Offered by reservation only at 6:30 p.m. each day and more on weekends, the public tours last about 75 minutes and can accommodate a maximum of eight guests, according to the Devil’s Lake Boat Tours website. Private charters also can be reserved by appointment.

Starting from the boat launch at the south shore pet swim area, Carter steers the pontoon south and then continues along the east bluff, pointing out iconic rock formations. The tour makes its way along to the north shore and then swings south along the west bluff. All throughout, Carter said she provides information about the geology and history of the park and lake.

While none of her patrons has yet asked for music to be played during a tour, Carter said they could do that as long as it wasn’t “obnoxiously loud” out of respect for other park users.

Schmelzer said businesses don’t need any kind of permit to use the lake due to Wisconsin’s navigable waterways laws. However, if they use park land — not the water — for something such as a photo shoot, they need a commercial use permit.

The Devil’s Lake Concession Corp., a nonprofit group, operates the park concession stands and gift shop. Boats and canoes, as well as a kayak adapted for people with disabilities, can be rented at the concession area.

Tours are by reservation only.

Visitors to the south shore at Devil’s Lake State Park may not immediately notice the new doors and windows on one of the park shelters, but a…

Last-minute camping just became easier at 15 state parks, including Devil’s Lake and Mirror Lake, thanks to a pilot program that allows same-d…

Chain-wrapped tires maneuvered through 6 inches of snow to deliver volunteers, braving frigid temperatures, to the top of the east bluff Frida…

Many families flock to state parks over the summer to encourage outdoor recreation and educational time for their children, and this year Girl…

Jennifer King, left, and Kevin Craycroft set off Tuesday on a boat tour of Devil's Lake near Baraboo while business owner Katy Carter steers. The couple from Louisville, Ky., was visiting the area as part of a vacation to celebrate their 20th wedding anniversary. "It's beautiful, absolutely beautiful," King said. 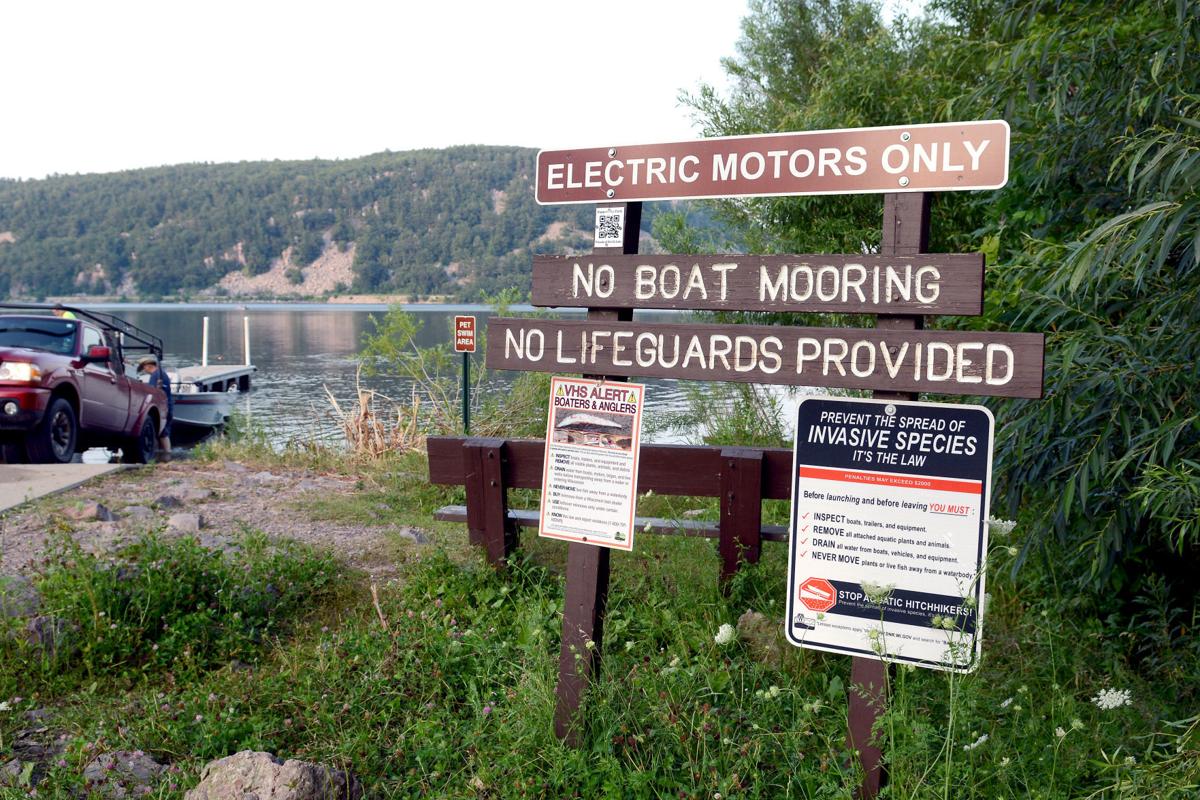 Gas-powered boats aren’t allowed on the lake in Devil’s Lake State Park near Baraboo, but ones with electric motors are, as indicated by this sign at the boat launch.

Devil’s Lake Boat Tours owner Katy Carter gets ready Tuesday to guide a tour for Kevin Craycroft and Jennifer King, both of Louisville, Ky., at the dock along the south shore.

A pair of kayakers float Tuesday on Devil’s Lake near Baraboo.