As members of the public shuffled back into the room after three hours outside a closed meeting, members of the Baraboo Common Council said nothing about the Baraboo District Ambulance Service financial audit presentation and discussion Tuesday.

Council member Heather Kierzek, who also serves on the Ambulance Commission, said Wednesday she wants to see change based on revelations of the audit by financial and tax advisory company Baker Tilly Virchow Krause, headquartered in Chicago.

“The audit was really concerning,” Kierzek said. “There needs to be a lot of changes made with the ambulance service.”

The audit was prepared and presented by Baker Tilley partner Tom Voncina with the help of Tom Garvey and Jacob Bach during the closed meeting. It points to a lack of cohesive training and internal controls regarding the entity’s finances.

The 25-page document released to the city in December highlights information already known by members of the Ambulance Commission, specifically issues that arose after EMT Jess Seefeld deployed overseas in May 2018. Seefeld was responsible for much of the billing work that required followup once it was filed, and according to the audit, seemed to be the only person who could perform certain functions within the billing software.

Seefeld makes claims to insurance companies or Medicare or Medicaid. She told auditors, as she told Ambulance Commission members during a meeting in late July, that a number of initially rejected claims received no follow-up attention. While Seefeld told them she fixed problems with claims when she returned, there is an unknown amount that will instead have to be written-off because they were not refiled in time with the correct information.

“No one is questioning the competency of our ambulance service or EMTs; they’re great at what they do,” Kierzek said. “Unfortunately, we’re not going to be able to continue paying our EMTs if we aren’t taking in the revenue. Something has to happen or the ambulance service will be bankrupt.”

The audit lays out the process for how billing is done within the service, which responds to calls within the city and town of Baraboo, the village of West Baraboo, Greenfield, Fairfield, Freedom and portions of Sumpter and Excelsior. The service responds to 4,500 calls annually, according to the audit.

Billing begins with an entry into a software system after workers have responded to a call. If a patient is transported, a physical copy of the details must be obtained from the receiving hospital or facility and brought back to the service. Whoever is serving as shift captain during that time is responsible for entering the information into the system, ideally before the end of their shift.

The information is transferred from its initial entry software to a billing system, which applies the appropriate codes for billing purposes. According to the audit, the staff in charge of billing then has to ensure the proper codes are applied before an invoice is sent to the person or entity required to pay for the call. Payments are usually received about four months later and generally either by check or electronic funds transfer.

One problem auditors found in interviews with staff was a lack of quality control to ensure the calls are actually entered into the system.

“We have heard from multiple individuals that on more than one occasion a physical record of a call has been found in drawers and on desks that had no record in” any of the software used to record calls, the audit noted.

Another concern raised in the audit is the process by which the payments are received. Only one person, Financial Coordinator Troy Snow, picks up the mail and electronically deposits the checks into the service’s bank account. A suggestion of the auditors was to instead create a two-person system to avoid inaccuracies and prevent possible mishandling of funds.

Auditors also found issues with claims not being filed in a timely manner, which resulted in the service not being paid. An interview with Amos Vande Hei, supervisor of billing and collections, found that he had not entered information from August, September and October 2018 until January 2019 and that “little to no payment and adjustment data was recorded in March through May 2019.”

“Mr. Vande Hei’s responses were troubling, in that he indicated that in Ms. Seefeld’s absence, very little work was able to be completed in regards to payments, contractual allowances, or write-offs,” auditors wrote in the report. “Per Mr. Vande Hei, the payment recording process was very difficult, and he did not have the proper knowledge or expertise to train someone to enter these transactions or properly enter them himself.”

EMS Chief Dana Sechler refuted these claims and said from his understanding, Vande Hei had filed all payments within a month to ensure they were ready for approval by the commission. He said he is unsure where the discrepancies between what he knows to be true and the details in the audit originated.

Sechler said “there’s some confusion” regarding bills being entered and disputed assertions within the audit that months of pay gaps occurred. He said “calls were consistently entered” and that the service has not had to use its reserve funding because billers are doing well catching up, Sechler said.

“We experienced a hiccup,” Sechler said. “Staff was diligent. Prior to this event, the billers were doing a very good job and have been doing a good job since.”

Auditors estimated that 10% to 15% of calls that went uncollected between April 2018 and May resulted in a conservative shortfall of more than $200,000.

“We also believe this to be a conservative approach to estimating the total shortfall in payments received,” auditors wrote. “The true impact may be greater. In order to properly measure the impact, extensive additional analyses would have to be performed, which falls outside the current scope of our review.”

After Seefeld returned in July, Sechler said the department had about $1.2 million in unpaid bills. Seefeld told members of the commission that payments had been mishandled and were not filed correctly. Members of the Ambulance Commission approved a line of credit in July. The line of borrowing up to $500,000 through Baraboo State Bank comes with a charge of $260 and an interest rate of 5.5% over 12 months. All assets of the service will be used as collateral. Sechler said the service had not had to use the credit line since it was established.

Delays in receiving bills may remain significant if no changes are made to the current system, auditors noted.

The meeting itself was called into question by resident Rob Nelson, who criticized the decision to present the audit in a session closed to the public and referred to Wisconsin Open Meetings Law as “restrictive” against governmental bodies in deciding to close meetings to the public. He said the ambulance service is important and residents should be informed on the audit and discussion related to it.

Council President Joel Petty moved for the meeting to be held in closed session because he said the body would likely be discussing personnel, which is one of the reasons allowed under state law. City Attorney Emily Truman noted that the agenda cites state statutes regarding contractual relationships, which is how BDAS and the city are connected.

A former member of the ambulance service, Ben Wolter, of Madison, also spoke to council members during the public comment period at the beginning of the meeting. He criticized Sechler and said nothing would change with him as director of the service, which has experienced communication problems between members for at least seven years.

“I was there for a year and a half, and the service was, at the time unfortunately, morally and professionally bankrupt, and now it is financially as well,” Wolter said. “Chief Sechler is going to try to tell you that it was the fault of folks in the billing department … things were brought straight to him. These concerns were laid out in multiple ways at multiple times by multiple people and they were entirely ignored.”

Wolter estimated there will likely be roughly $500,000 unrecovered, based on his understanding of the reimbursement rate and said he is “entirely unsurprised” by the troubling results of the audit.

“You would be looking at, potentially, enormous losses,” Wolter said. “This is not the fault of the people who are trying, the people that are there, the employees who put their lives often on the line. I would strongly encourage you to make the decision and choose to find a new director.”

Auditors posed three suggested remedies for the problems found within the service. The district could outsource its billing to an outside company, its finances can instead be handled by the city finance department or it can streamline financial responsibilities to be overseen by a core group of individuals with billing as their main tasks.

Regardless of any possible changes, they also recommended extensive cross-training to prevent a problem when employees leave the district or are unexpectedly absent from work. 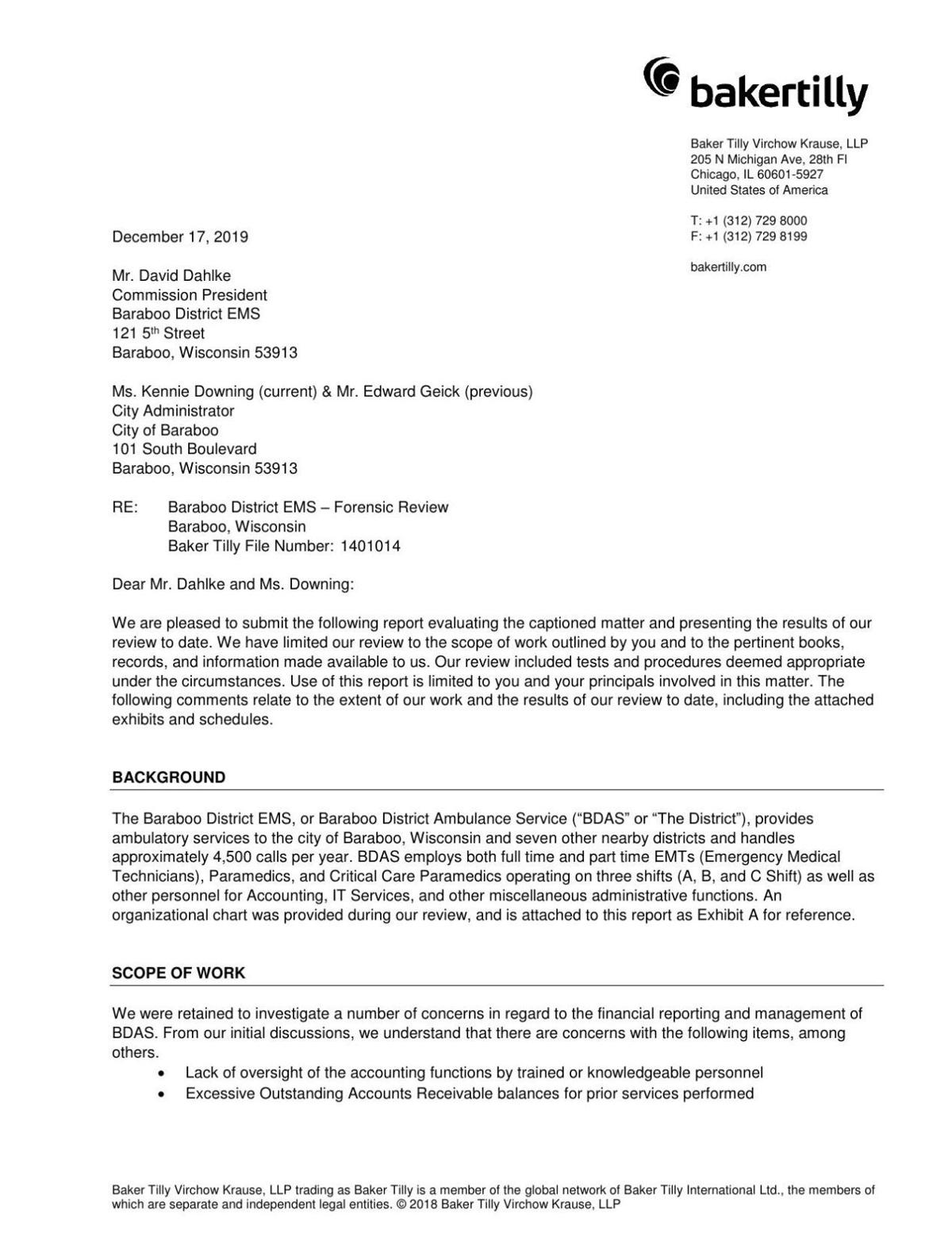 Baraboo Common Council members reversed two proposed measures Tuesday: how much to give the Baraboo District Ambulance Service and whether to …

Baraboo EMS Chief Dana Sechler took his current position a decade ago and remembers being told to prepare; a new building for the department w…

The Baraboo District Ambulance Service has shifted its focus to transition.

The Baraboo Ambulance Commission decided Wednesday to keep funding provided to it through the federal Coronavirus Aid, Relief, and Economic Se… 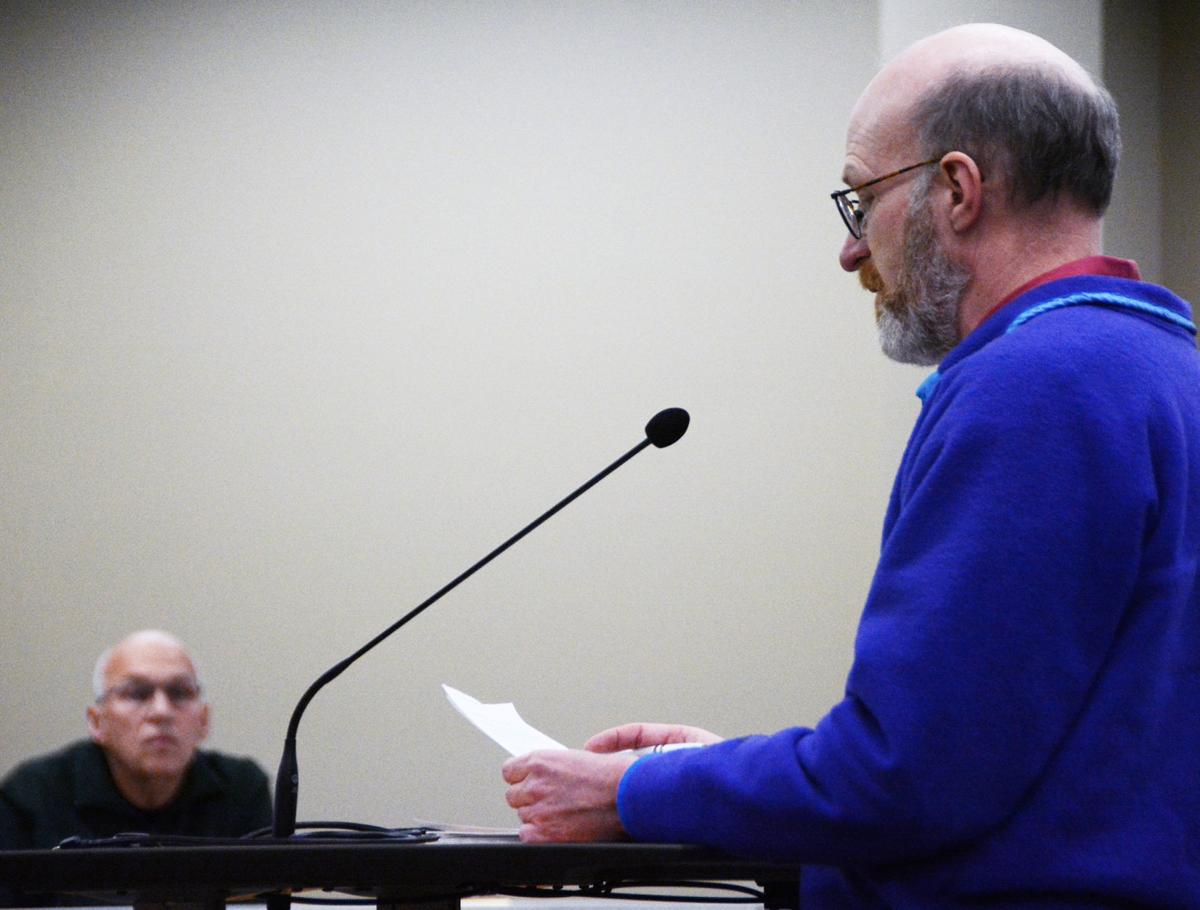 Baraboo resident Rob Nelson tells Baraboo Common Council members Tuesday that he disagrees with presenting an audit of the Baraboo District Ambulance Service finances in closed session. Council President Joel Petty, in the background, said he moved for the closed session because talks could include specific employees. 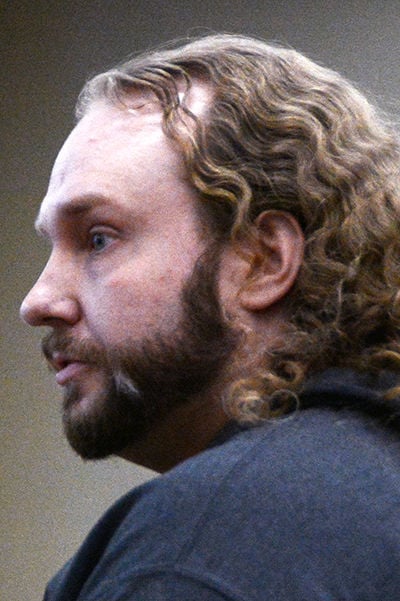