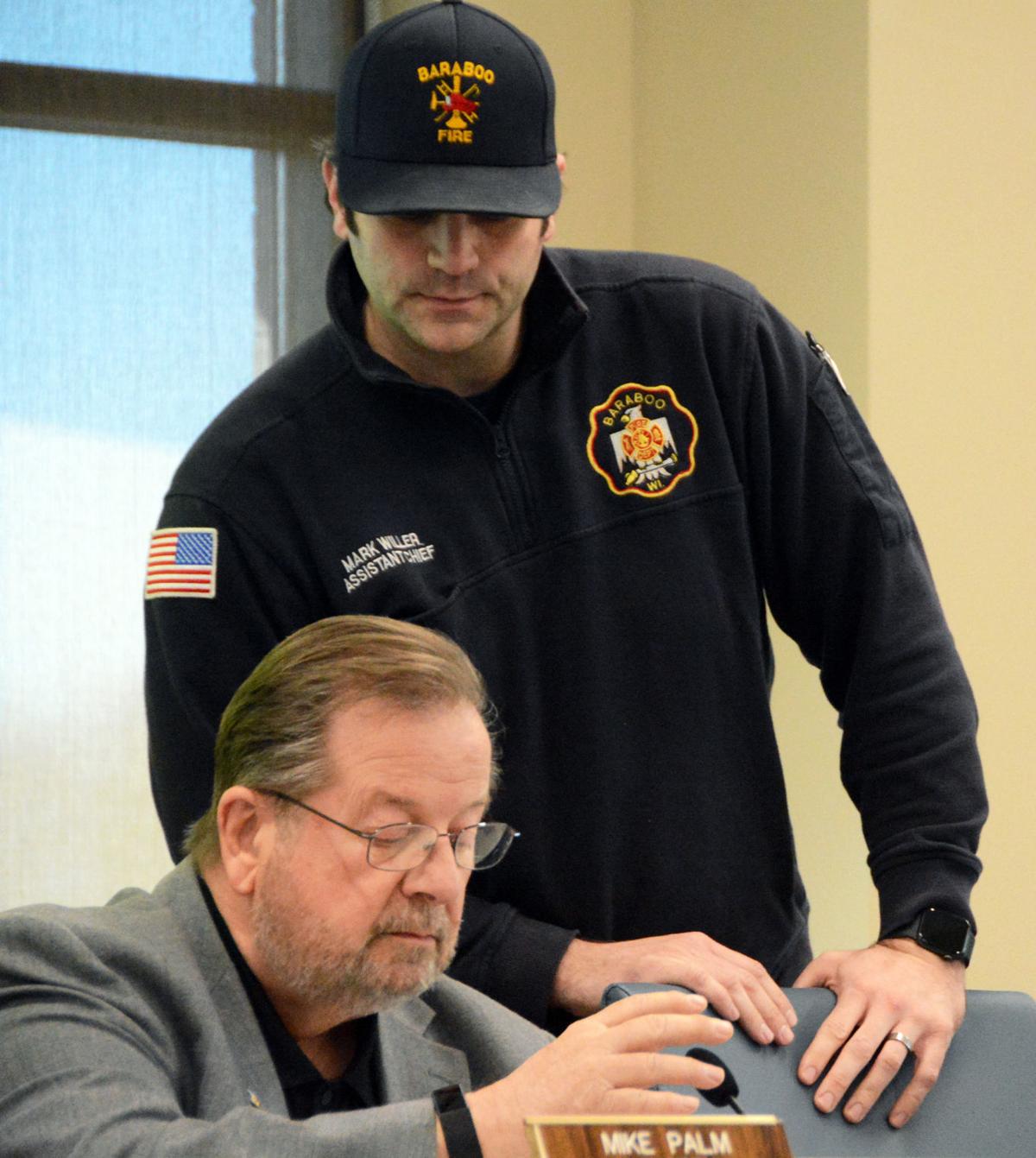 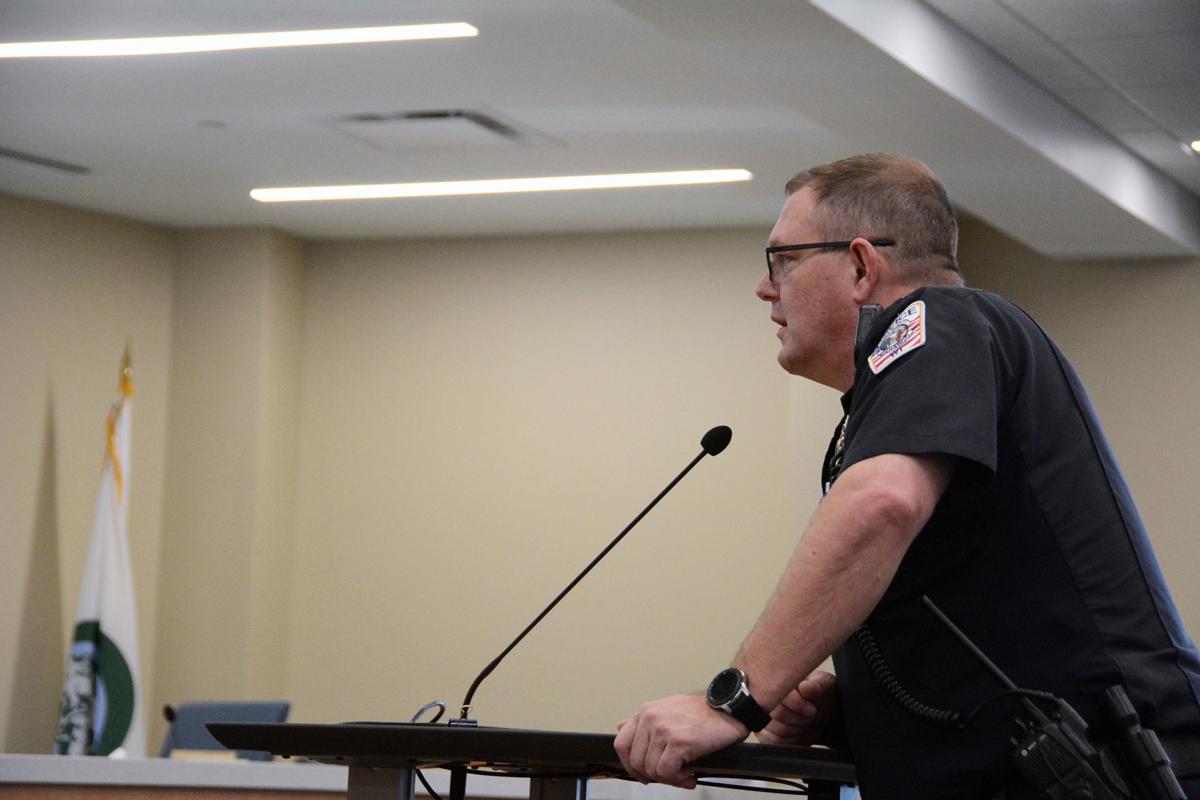 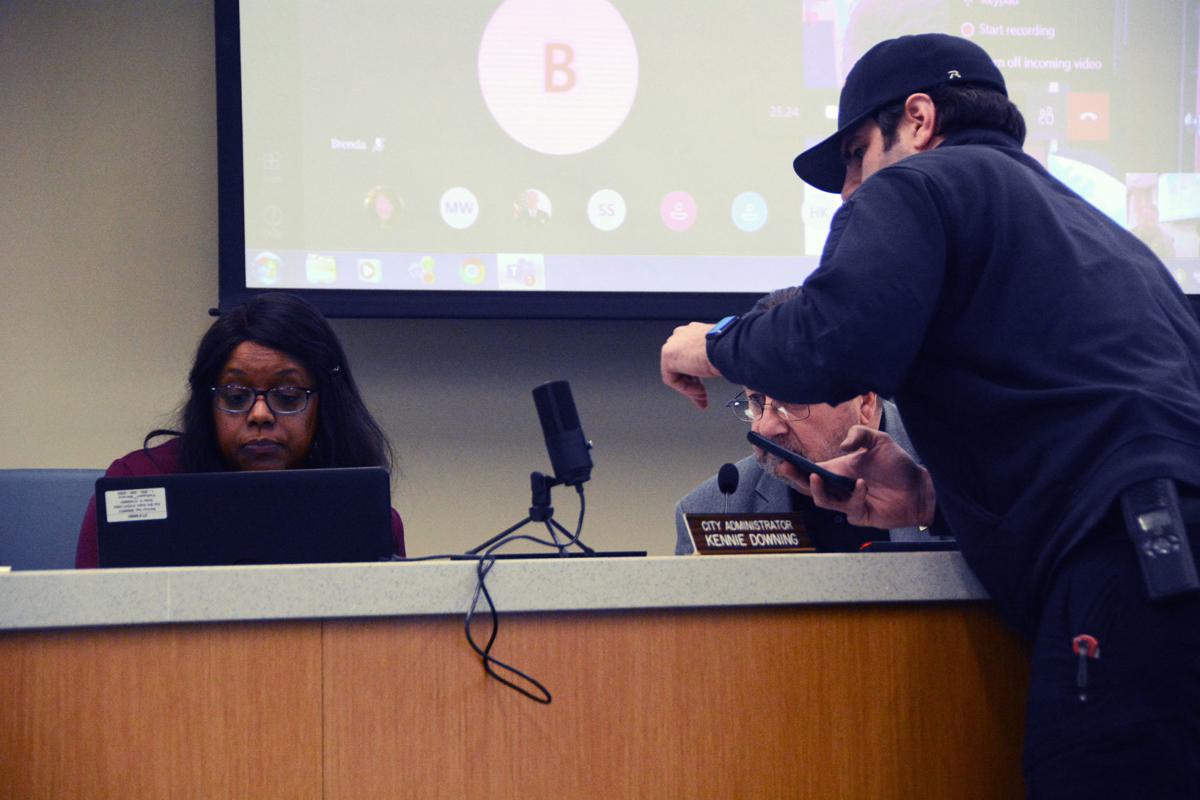 Assistant Fire Chief Mark Willer, right, helps City Administrator Kennie Downing with her laptop Thursday while testing software to host telecommunication meetings for the Baraboo Common Council. Mayor Mike Palm, also pictured, said the city plans to conduct meetings over the internet until the threat of COVID-19 disappates enough to cancel his emergency order. The meetings will remain accessible to the public via the local television channel or by calling into the meeting by following instructions posted with the council agenda.

Baraboo officials are confident they will be able to conduct Tuesday’s council meeting with the help of video software.

The audience at the city meeting chambers was sparse Thursday, but nearly all Baraboo Common Council members were there with the help of Microsoft Teams, a video meeting software program. City officials were also present, virtually on the projector screen at City Hall.

City Administrator Kennie Downing was running the laptop that controlled the setup. Mayor Mike Palm, City Attorney Emily Truman, Police Chief Mark Schauf and City Clerk Brenda Zeman were seated throughout the room with laptops in front of them. The audience chairs were empty.

There was tweaking to avoid echoes, some unadvised typed messages among attendees and a staggered start time as members reported to the meeting and electronic equipment was set up. Microphones and speakers were moved around as organizers tried to pinpoint how best to relay audio from council chambers through the software as well as to the local television channel.

“This is why we’re doing this trial run today,” Palm said as council members talked among themselves about their display and advised which buttons to hit.

The special meeting was held solely to test how compatible the software was to everyone meeting from their homes. No official action was noted on the agenda or taken during the meeting. Each member was called upon for a role to ensure the microphones were functioning. Dennis Thurow, who is retiring Monday from the council, was absent.

Palm recently credited Thurow for his longtime service to the city. Thurow was the city’s mayor from 1988-92.

“Dennis’ decades of public service is testimony to his civic responsibility,” Palm said. “It can be used as a model for all of us.”

Meetings will look different for the duration of the citywide emergency declaration as council members meet online in an attempt to lessen the chance of spreading the coronavirus COVID-19. Instead of voicing a collective voice vote, council members will be called on by Zeman to vote individually via their video connection. If there are questions on presentations by department leaders, Palm said he will ask council members to speak after they unmute their microphone.

“It will take a little extra time doing the meeting this way, but at least we can keep people in their homes and away from congregating as a group,” Palm said, thanking all of the organizers for their work to establish a successful setup. “This is a monumental task to get set up and I also want to thank all of you for your patience.”

Residents who want to attend the open meetings have been encouraged by city officials to join via a phone number for a conference call posted on the council meeting agenda.

Baraboo leaders on COVID-19 response: 'We got this'

Baraboo Police Chief Mark Schauf was reassuring in his comments to the public and council members Tuesday during a special meeting.

A Wisconsin Dells man was recently sentenced for his part in a robbery at Haskins Park in West Baraboo.

An Oconomowoc man is wanted after allegedly sexually assaulting a child at a residence in Lake Delton.

A Rock Springs woman was sentenced to 6 months in jail for selling narcotics to a woman who took drugs with her and nearly died.

Two of Baraboo’s signature summer draws, live shows at Circus World Museum and the Big Top Parade, have been canceled this year in response to…

City settles suit against Alliant for injury during Baraboo project

The city of Baraboo recently settled a lawsuit against Alliant Energy Corporation and Vannguard Utilities Partners of DeForest, recovering the…

Assistant Fire Chief Mark Willer, right, helps City Administrator Kennie Downing with her laptop Thursday while testing software to host telecommunication meetings for the Baraboo Common Council. Mayor Mike Palm, also pictured, said the city plans to conduct meetings over the internet until the threat of COVID-19 disappates enough to cancel his emergency order. The meetings will remain accessible to the public via the local television channel or by calling into the meeting by following instructions posted with the council agenda.