One of the fiercest battles for control of the state Senate last year was fought in the 17th District, which covers much of the southwestern corner of the state and includes Reedsburg, Platteville and Monroe.

In his successful attempt to retain his seat, state Sen. Howard Marklein, R-Spring Green, set a Wisconsin State Legislature record this election cycle, raising more than $900,000. That’s the largest haul of campaign contributions brought in by a general election candidate this century, and likely in the history of the Legislature, according to an investigation by The Badger Project.

His Democratic challenger, Kriss Marion, a 51-year-old organic farmer and county board member from Blanchardville, was no slouch either. She raised nearly $600,000 in her losing bid. Combined, the nearly $1.5 million raised by the two candidates also sets a state Legislature record for most direct contributions to a general election race this century, and also likely in the history of the state Legislature.

The pair raised, and mostly spent, that record-setting amount to land a part-time state senator job that pays $52,999 a year.

“I’ve never seen anything like that,” said former state Sen. Dale Schultz, who represented the district from 1991 until 2015.

The 17th State Senate District is a long, vertical strip of the state’s Driftless Area that runs north from the Mississippi River and Illinois border about 125 miles before stopping just short of Wisconsin Rapids. 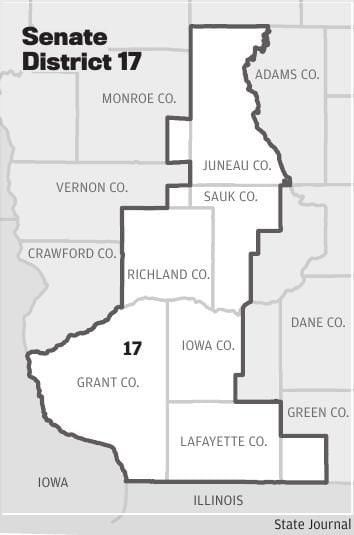 The district touches nine counties and includes Schultz’s farm near Richland Center, Marion’s farm near Blanchardville, and the farm where Marklein, now 64, grew up in Spring Green.

Marklein, a member of the Legislature since 2011 and the Senate since 2015, is retired from his career as a certified public accountant for the accounting and consulting firm Baker Tilly. In Madison, Marklein sits on the powerful Joint Committee on Finance and chairs the Committee on Agriculture, Revenue and Financial Institutions. The married father and grandfather has proven to be an effective fundraiser, bringing in nearly $500,000 in his successful first campaign for state Senate in 2014, according to campaign finance data.

Marion was making her first run for the Legislature, but is no novice to life in the spotlight. The former newspaper reporter and married mother of four often appears in local media as an advocate for female farmers, clean water and the region. She heightened her public profile significantly while part of a trio that successfully challenged a state law banning bake sales.

On first glance, the rural district doesn’t seem to be a place where political donors would pour in cash. Schultz, a Republican, said he remembered raising about $10,000 in his first campaign for Assembly in 1982. His own personal record came in the 2006 campaign, when he raised more than $300,000 while serving as majority leader of the state Senate.

In 2013, then-state Rep. Marklein announced he would run against him in the 2014 Republican primary election for his seat. Schultz retired and declined to endorse Marklein.

Marklein went on to beat a Democrat challenger in the general election that year, taking 55 percent and winning by more than 6,400 votes.

Against Marion in 2018, his margin narrowed slightly as he took 54 percent and won by about 5,700 votes.

After receiving requests for an interview for this story, Marklein replied with a six-sentence email statement.

“The 2018 elections are over,” he wrote in the first section of his email. “I prefer to focus on policy and service rather than divisive criticism and politics. My focus is on serving the people I represent and working hard for Wisconsin.”

Schultz, a 65-year-old moderate Republican who supported Democrat Tony Evers for governor but said he did not get involved in this race, credited Marion with running an “incredible grassroots campaign” with lots of people and energy.

In a phone interview, Marion said she “was really well-suited to the area.”

“I think I was a good candidate and I was well liked by Democrats. And I raised a ton of money,” she said. “And to only move (the vote) a percentage point is kind of shocking.”

Since Republicans drew the district maps in 2010, they have mostly held a majority in the 33-member state Senate, including an 18-15 majority in 2018.

Democrats had hoped to surf a blue wave of liberal voter energy in 2018 to take both the 17th District and the entire Senate, said Joe Heim, a professor emeritus of political science at the Unviversity of Wisconsin-La Crosse.

The 17th District previously backed Barack Obama for president, but voted for Donald Trump in 2016, Heim noted, an encouraging sign for the GOP that it could be held.

Before Marion even announced her campaign in February 2018, Marklein had raised hundreds of thousands of dollars, according to campaign finance reports filed with the state. That gave him a strong head start and the ability to buy TV and radio advertising, especially in the closing weeks and days of the campaign. 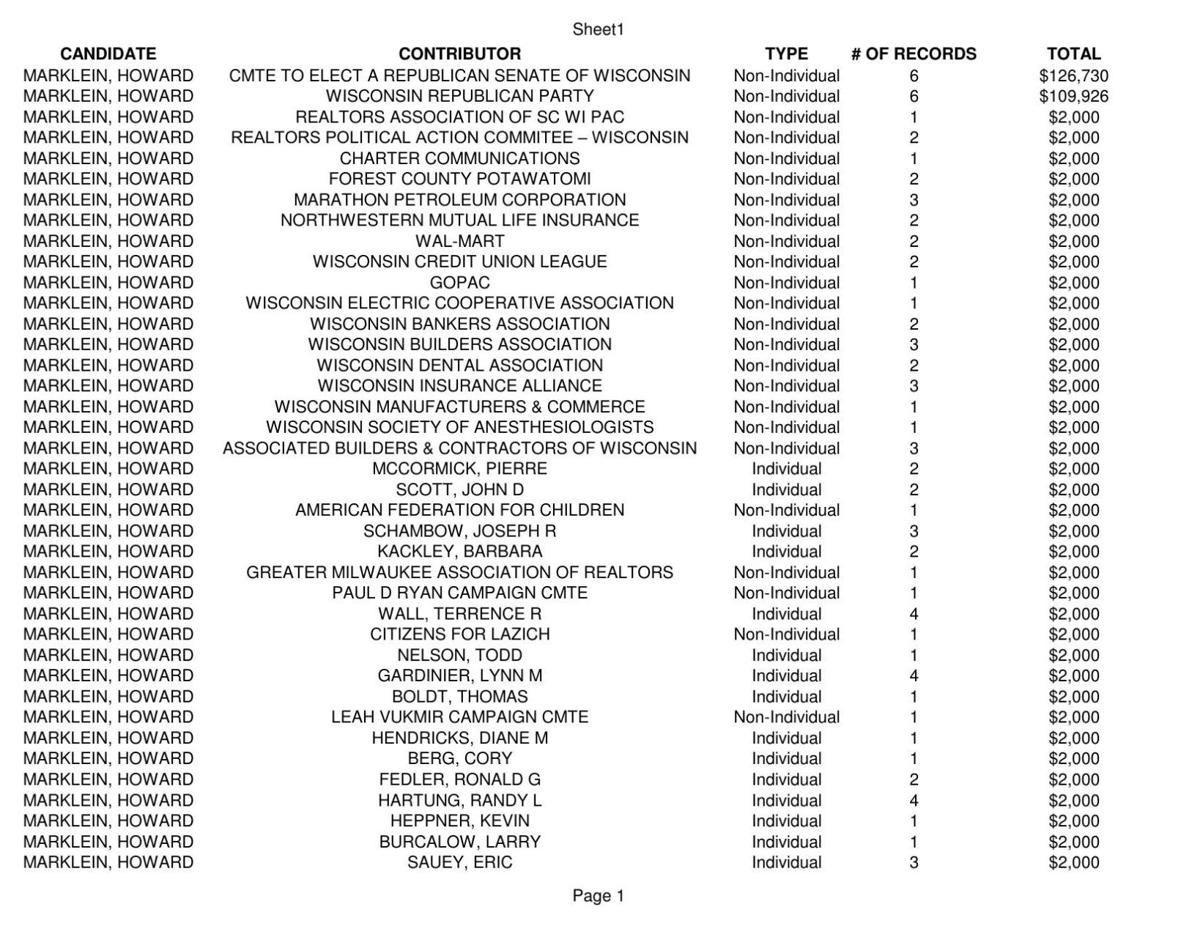 Logging thousands of miles across the long district in her red, former fire department pickup truck during the campaign, Marion said she constantly heard radio ads purchased by Marklein’s campaign or on his behalf by outside groups.

“My name came up negatively every minute when you’re driving,” Marion said. “You’re changing from station to station and it’s just relentless.”

Marion drew some attention from the national press late in the campaign, appearing in New York Times pieces about Wisconsin state politics and polluted groundwater. That exposure, she said, and other late media pieces helped boost her fundraising as she hurtled toward the finish line. But most radio and TV time had been sold at that point, she said, blunting her messaging and hurting her ability to answer her opponent’s ads.

Looking at Marklein’s donors, he received the maximum donation of $2,000 from many businesses and groups, including Charter Communications, the Potawatomi Native American Tribe, the Marathon Petroleum Corp. and Walmart.

His fundraising record of more than $900,000 in the 2018 general election campaign was actually topped by state Sen. Alberta Darling, R-River Hills. She raised more than $1 million in her successful 2011 recall election, according to campaign finance data. But fewer restrictions and limits exist in state law for those rare elections, making it easier to raise money. 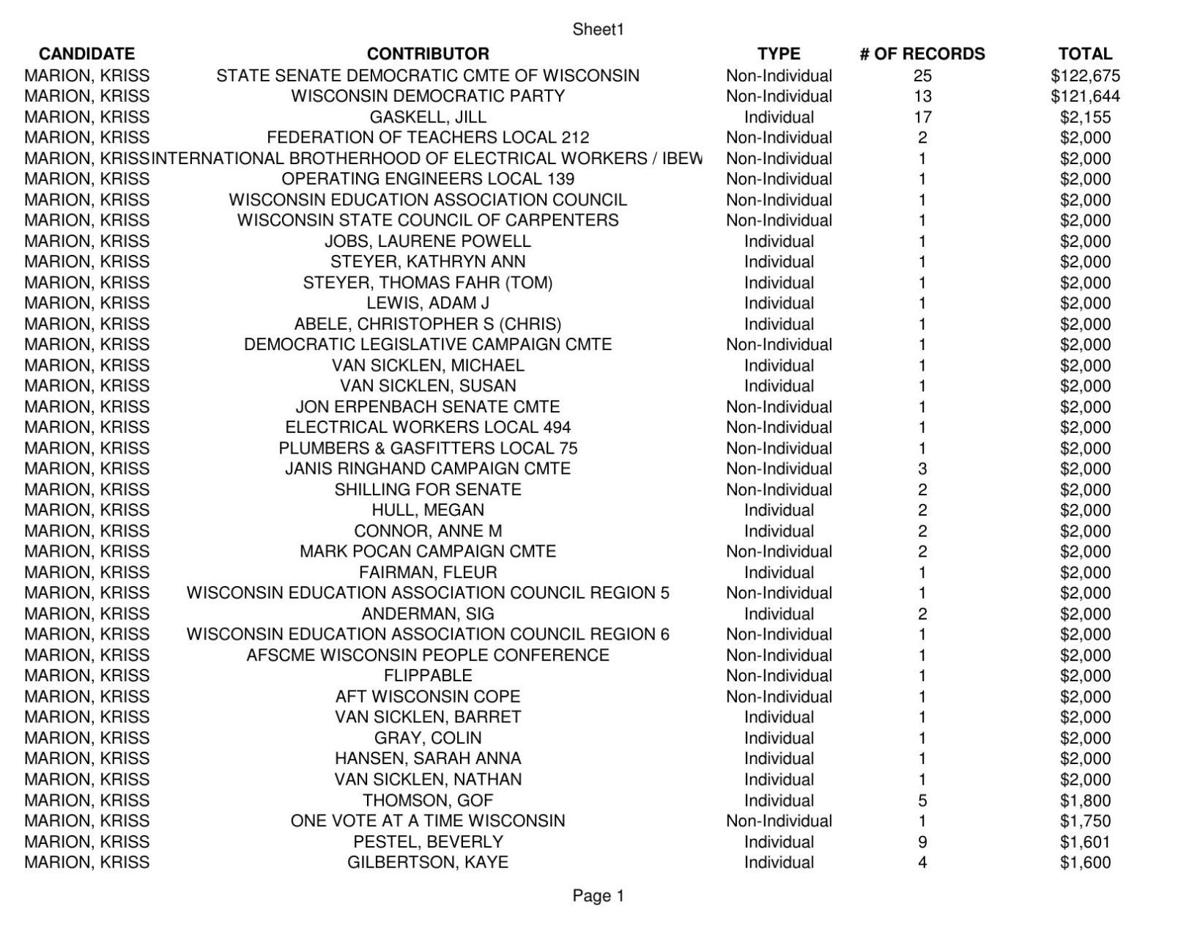 With the balance of the Senate on the line and a potential blue wave motivating both sides, the political parties also spent heavily on the race.

Marklein and Marion received nearly identical amounts from their parties, about $240,000 each.

That means more than 40 percent of Marion’s total campaign cash flowed from her political party’s fundraising committees, the Wisconsin Democratic Party and the State Senate Democratic Committee of Wisconsin.

More than 25 percent of Marklein’s total haul came from his political party’s fundraising committees — the Wisconsin Republican Party and the Committee To Elect A Republican Senate of Wisconsin.

Then there were independent expenditures — money not donated to the candidates, but spent on their behalf.

The American Federation for Children, a conservative group funded by the billionaire family of U.S. Education Secretary Betsy DeVos, spent more than $500,000 through its political action committee on negative TV ads about Marion, according to campaign finance reports filed with the state.

It’s no secret that money in politics continues to grow.

Large deposits of party cash to Marklein and Marion were made possible by a recent law change in Wisconsin. In 2015, the Republican-controlled Legislature doubled the limits on contributions from individuals, lifted a ban on corporate contributions to political parties and legislative campaign committees, and removed limits on how much a political party could donate to a candidate, among other things.

Also, the 2010 U.S. Supreme Court ruling in the Citizens United case, which prohibited spending limits by independent groups, was a landmark decision that led to a flood of campaign spending nationally, including in Wisconsin.

In 2002, the total amount of direct campaign contributions to all candidates for the Wisconsin state Senate was about $2.9 million. That compares to the nearly $1.5 million Marklein and Marion raised for a single state Senate seat 16 years later.

Donations to candidates for the Wisconsin state Senate and Assembly have risen steadily in the last 18 years, to nearly $19 million for all candidates in last year’s campaign from about $10 million in 2000.

That doesn’t even include the staggering increase in cash from outside groups spent on behalf of candidates, often to run TV or radio advertising bashing an opponent. Those groups, including the Democratic Governors Association, the Republican Governors Association and Americans for Prosperity, poured a record $61 million into the 2018 election here, according to the nonprofit watchdog group Wisconsin Democracy Campaign, which tracks campaign finance in the state. That’s up from $36 million in the 2014 midterm here and $19 million in 2010.

Wisconsin Democrats say they want to scale back the 2015 Republican changes to campaign finance reform and elect representatives who will “fight for policies to reform the campaign finance system that Wisconsin Republicans broke,” said Courtney Beyer, communications director for the Democratic Party of Wisconsin.

The Republican Party of Wisconsin did not respond to several requests for comment on the issue.

Any changes before 2020 are unlikely though, as Republicans will hold both houses of the Legislature until at least then.

Marion is looking forward even further, to the 2022 election, when the 17th Senate District is back up for reelection.

“I would love to remove Marklein, so I’m still thinking that direction,” she said of running again. “He’s getting more power, running more of the committees.”

She accused the senator of being hypocritical, saying he ran a campaign against Madison “insiders,” while noting “it doesn’t get more insider than being on (the) joint finance (committee).”

Marklein responded to those criticisms in the second and final portion of his email statement to The Badger Project.

“I have been appointed to influential positions in the Senate, which is good for those I serve,” he wrote. “I have a strong voice and tremendous opportunities to make a difference. My focus is on affecting good policy that makes strong fiscal sense for the people of the 17th Senate District.”

That district will look different in 2022. The maps must be redrawn after the 2020 census, which could mean a less favorable electoral landscape for Republicans. With a Democrat in the governor’s mansion, the GOP lacks the full control it had to draw the lines in 2010.

Yet if Marklein continues his hefty fundraising and remains popular in the district, any challenger will face an uphill battle to dethrone him. Even a well-funded and media-savvy one like Marion.

Her success in generating voter enthusiasm likely will be her best chance.

“There is no substitute for getting off the couch and getting engaged,” Schultz said. “That’s what being a citizen is all about and you can’t outsource that. If you really want to make change, you have to be engaged.”

Peter Cameron writes for The Badger Project, a Wisconsin-based nonpartisan, nonprofit investigative journalism organization. Cameron can be reached at pcameron@thebadgerproject.org.

State Senator Howard Marklein, R-Spring Green, said he is anxious to get back to work for his second term in the state legislature.

Republican Howard Marklein won in his bid for the 17th District State Senate. 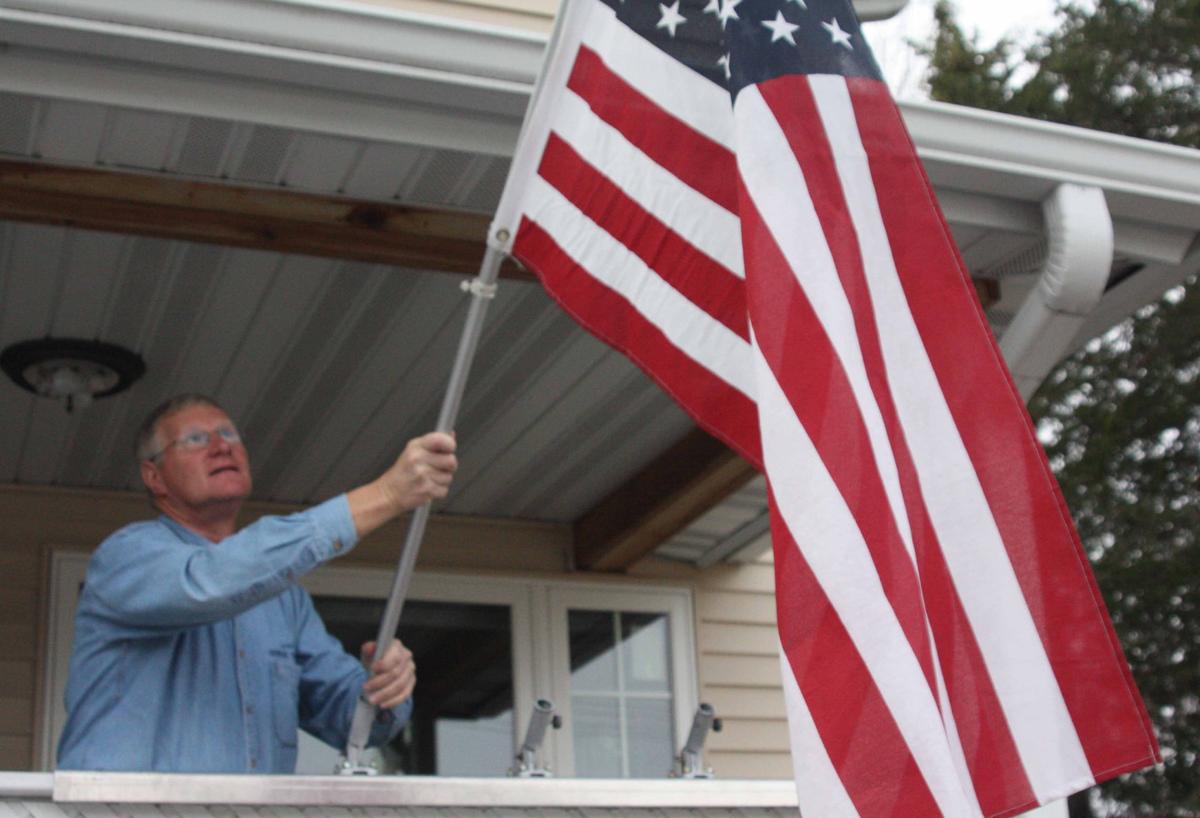 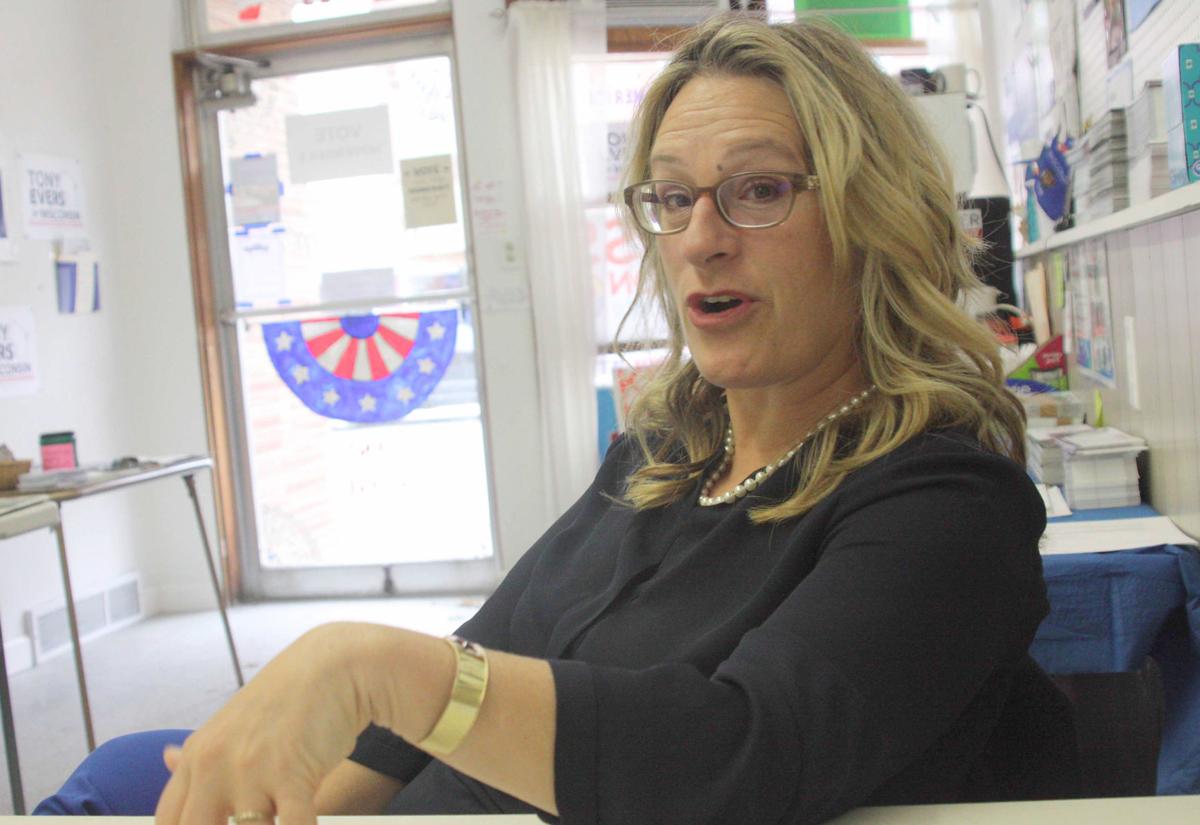 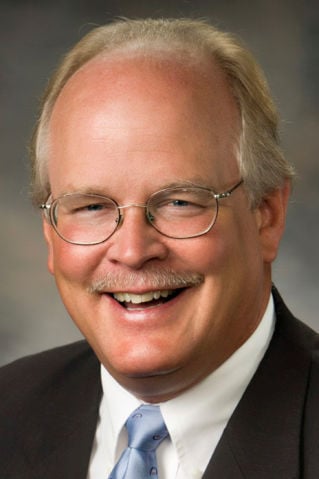