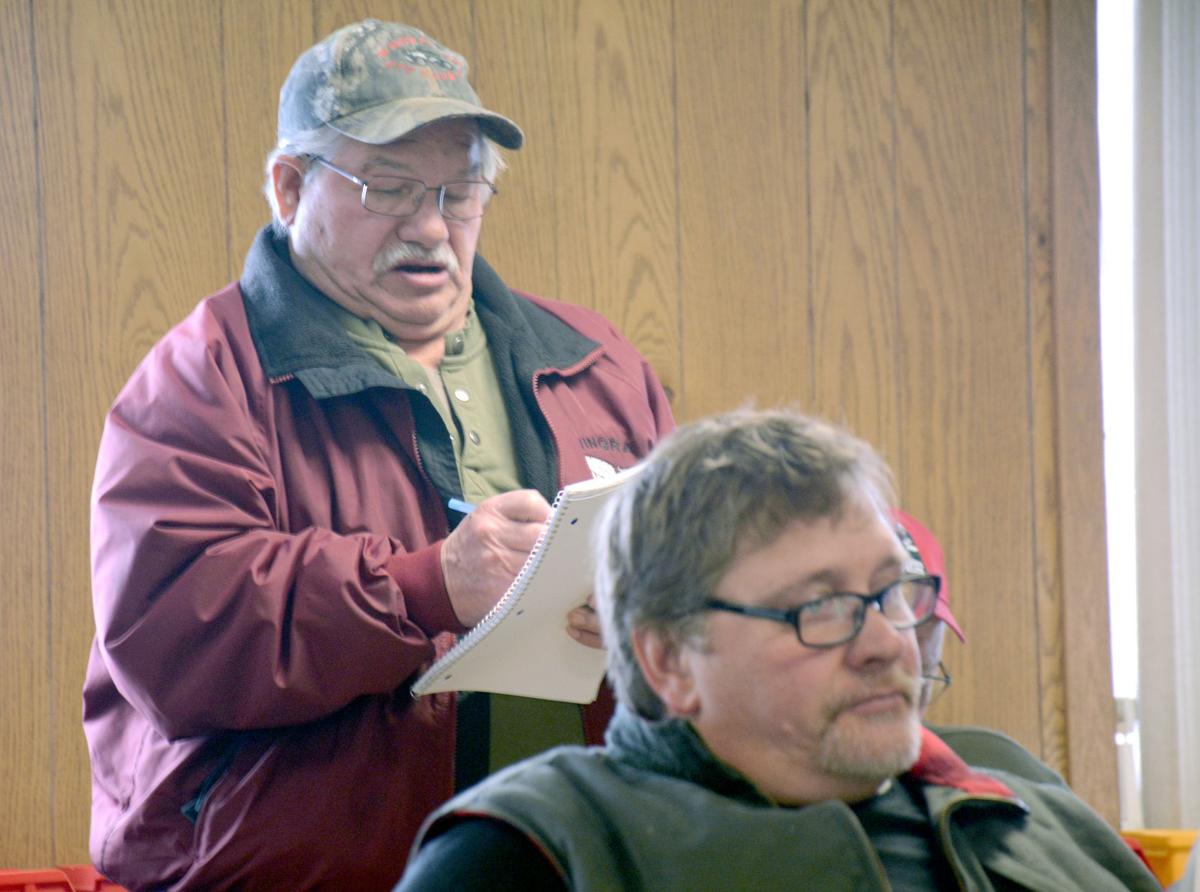 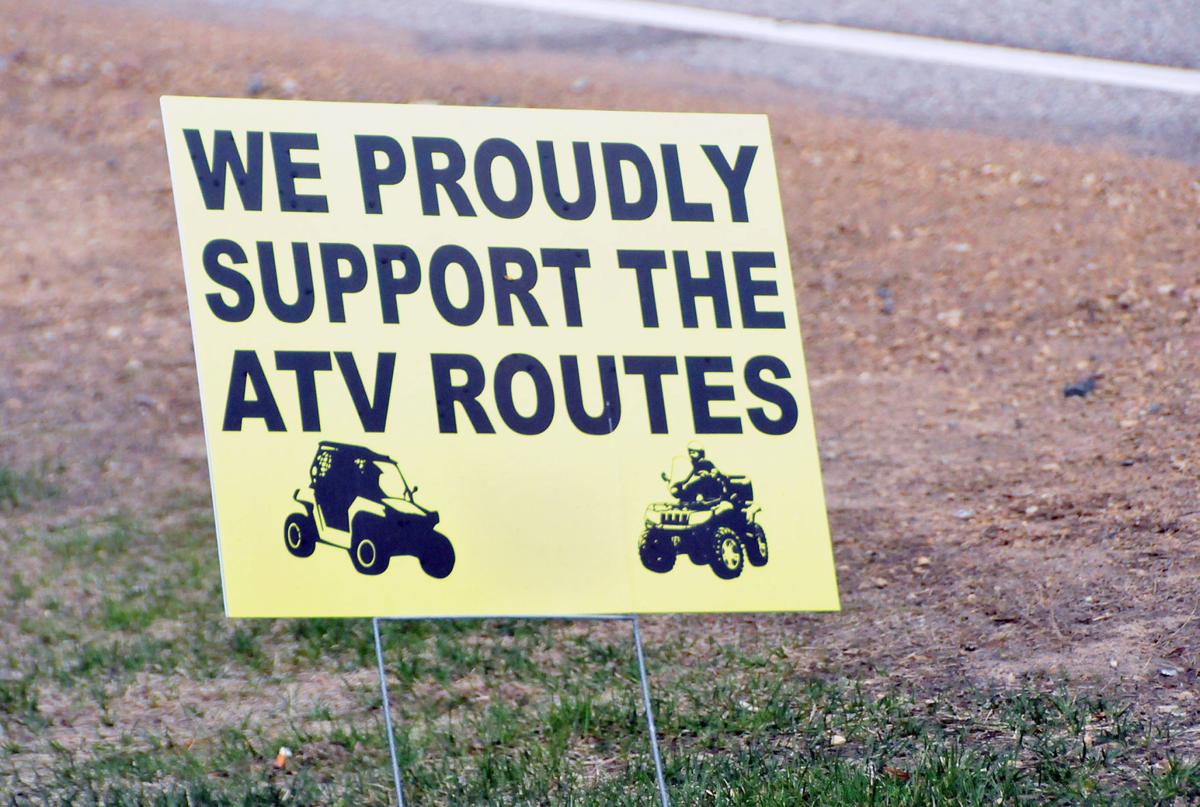 Signs promoting establishment of all-terrain vehicle routes throughout Sauk County dot Highway W, including this one outside Frankie's Bar outside Baraboo.

The Sauk County Board’s Highway and Parks Committee turned down applications from four clubs seeking to add more than 70 miles of ATV routes along public roads.

The new requests would have doubled the mileage of existing highway routes the county board has approved since adopting an ATV ordinance in 2013.

“The manufacturers of these vehicles specifically state they are not made for use on roads,” said committee member Kevin Lins of Spring Green, the proposal’s most vocal opponent. “But we know better than these folks, right? Or at least some people think they do.”

Lins also expressed concern about a legal loophole in Wisconsin that requires drunken driving offenses on different types of vehicles to be counted separately, rather than being lumped together.

For example, if someone has six prior drunken driving offenses in cars and then gets one on an ATV, they are penalized as if it was their first offense, not their seventh.

That creates an incentive, Lins said, for people with multiple drunken driving offenses to risk operating ATVs while intoxicated. He said he would not support any additional ATV road routes until state lawmakers close the loophole.

A bipartisan bill proposed in the Wisconsin Assembly last year would have made drunken driving offenses on all vehicles cumulative. It received a public hearing and made it out of committee, but never got a floor vote.

The applications rejected Wednesday included routes in 15 towns and the village of Lime Ridge.

Only one entity, the Spring Green Town Board, which Lins chairs, went on record in opposition. Other town representatives said they supported or took no position on the proposals.

The highway committee first took up one route separately, voting 3-2 against opening a portion of County Highway G in Spring Green.

Supervisors Lins, Jean Berlin of Hill Point and Tommy Lee Bychinski of Reedsburg voted against the route. Supervisors Brian Peper of Loganville and Dave Riek of Spring Green voted in favor of it.

The committee then took up the remainder of the routes together, and voted 3-2 to reject them all. Peper and Bychinski voted in favor of the expansion.

State law allows local governments to decide whether people can ride ATVs on their roads, streets and highways. Many towns within the county already have opened roads, and local clubs say they need the county highways to connect that existing network.

Baraboo Bluffs ATV/UTV Club representative Bob Spencer said he was disappointed in the committee’s decision, considering that clubs have spent months pushing for the new routes.

In an email to committee members after the meeting, he asked that the panel reconsider. He said he worried that the committee’s action will cause ATV riders to use highways illegally.

“Your decision will cause those who are unable to connect from one part of their township to the other to take the chance on a highway not designated without proper signage,” Spencer said. “The signage is to inform all vehicular traffic of ATV traffic on the roadway.”

In a written report, Gavinski responded to concerns about the disruption of highway traffic flow saying that ATVs are not the only vehicles that travel at speeds slower than the posted limit. Drivers need to be prepared for all types of hazards, he said.

Supporters of the routes say opening public roads to ATVs will bring recreational tourism to the area and help local businesses, such as restaurants, taverns and gas stations.

Pat Werner of the Wisconsin River Runners ATV Club told the committee Wednesday that neighboring Richland County recently approved an ATV ordinance, and that clubs hope to link the two counties together.

“What we’re trying to do is to tie it all together for tourism and everything else,” Werner said.

Federal regulators, safety advocates and manufacturers urge ATV riders to stay off public roads, even if local governments allow access. They say the vehicles are unstable on paved surfaces because they are equipped with soft, low-pressure tires and a high center of gravity.

Laurie Hasenbalg of the town of Excelsior, who spoke to the committee during a portion of the meeting set aside for public comments, said she worried that allowing ATVs on heavily trafficked state highways ultimately would result in tragedy.

“I still find it shocking that even though all the manufacturers of ATVs and (utility task vehicles) caution against riding on paved surfaces, that the clubs keep asking for — and the governing bodies keep approving — more routes,” Hasenbalg said.

Sauk County Board to take up revised ATV road rules

The Sauk County Board on Tuesday will consider a major overhaul to rules governing off-road recreational vehicles on county highways.

A coalition of health, safety, and consumer groups from across the United States has jumped into the debate over off-road vehicle use on Sauk …

The Sauk County Board is likely to consider major changes to an ordinance governing all-terrain vehicle routes along public roads next month.

As he traverses Sauk County’s countryside in his Can-Am UTV, waving at passers-by, Robert Spencer encounters more cheers than sneers.

Under proposed ordinance changes, Sauk County would seek — but not require — input from smaller units of government when considering applicati…

Under proposed revisions to a Sauk County ordinance, those who apply for all-terrain vehicle access on a county highway no longer would need t…

One month after it summarily rejected a major expansion of all-terrain vehicle routes along Sauk County highways, a committee will reconsider …

One month after rejecting a major expansion of all-terrain vehicle routes on Sauk County highways, a committee reversed course Wednesday.

PLAIN — A utility-task vehicle crashed along a town road Saturday, injuring four people just days before the Sauk County Board considers a lar…

Reedsburg could expand ATV routes to all city streets

All-terrain vehicles could be granted access to drive on all city streets in Reedsburg.

ATV’s and UTV’s are allowed to drive on all city streets in Reedsburg.

The Sauk County Board of Supervisors has voted to expand off-road recreational vehicle routes along county highways.

Signs promoting establishment of all-terrain vehicle routes throughout Sauk County dot Highway W, including this one outside Frankie's Bar outside Baraboo.