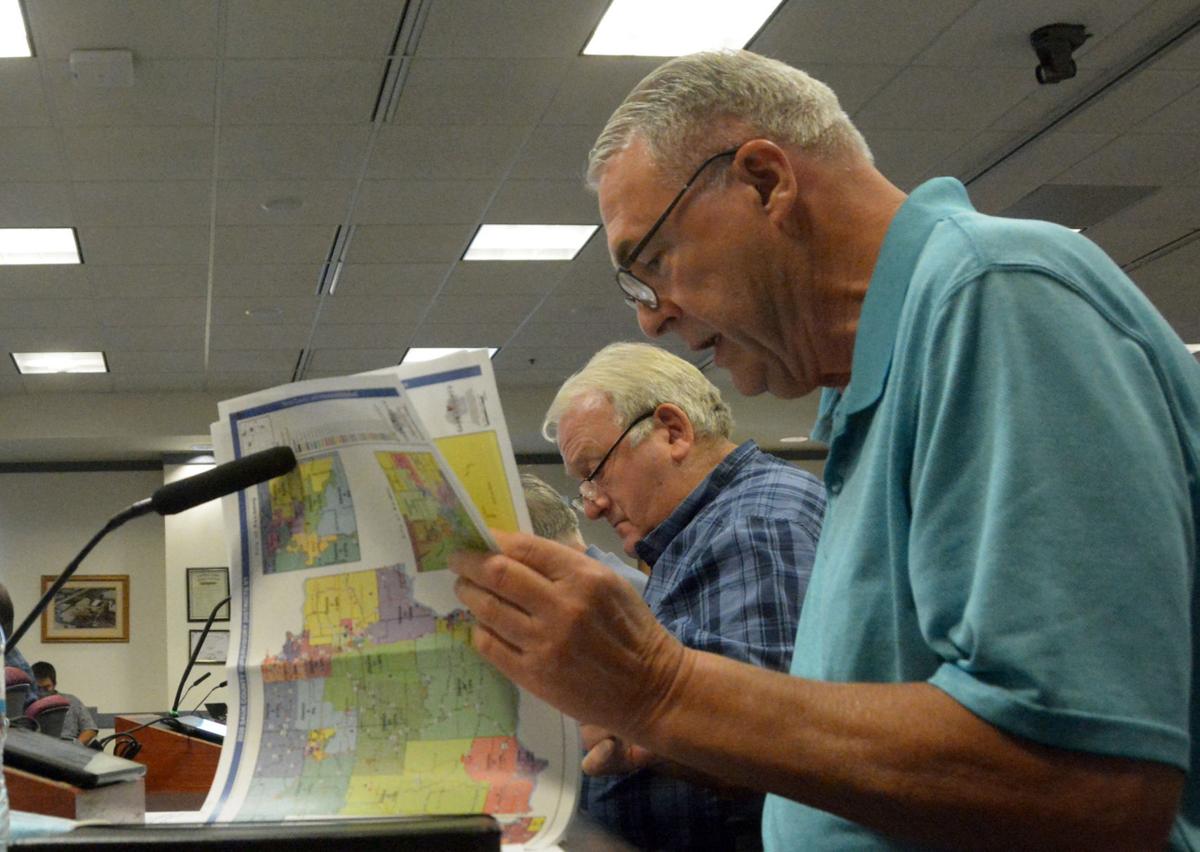 Sauk County Supervisor David Riek of Spring Green evaluates the proposed district maps Thursday as he speaks during a special county board meeting to approve the tentative redistricting of the county within the time constraints dictated by state statute. 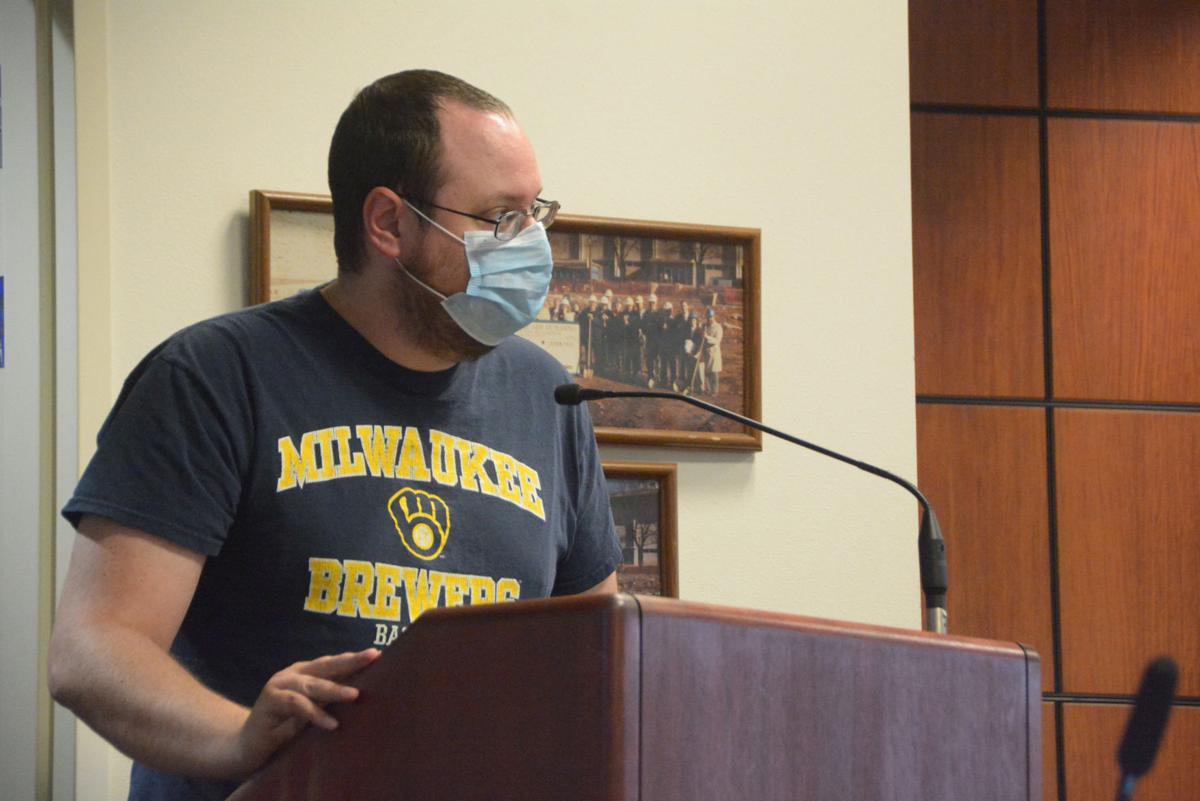 Town of Baraboo Clerk Morgan Olson asks the Sauk County Board of Supervisors to consider changing the redistricting map to avoid extra costs and time for elections in the town Thursday during a special board meeting.

With a deadline looming just hours away, Sauk County supervisors approved a tentative map outlining the new districts of the county based on population Thursday during a special meeting.

Supervisors credited Joe Fleischmann, coordinator of the Geographic Information System mapping department, GIS Specialist Kelly Felton and their staff for creating the maps in a small amount of time due to delays in the release of Census data because of the COVID-19 pandemic and disagreement between the state Legislature and Gov. Tony Evers regarding the timeline for drawing new district lines.

Fleischmann presented the method they used to create the outlines during the public hearing before the special meeting. Initially, they came up with 30 drafted plans and whittled them down to the one presented to supervisors for approval.

“What we really tried to do was make them as compact as we could,” Fleischmann said. “The other thing we considered in doing this was potential growth around municipalities.”

Mapping tools helped them organize blocks, which are shaped regions dictated by features like railroad tracks, powerlines and other regions, like school districts. Fleischmann said one of the “stumbling blocks” workers encountered was supervisors being near one another and dealing with larger population blocks, which cannot be separated into different districts that extend beyond that specific block. 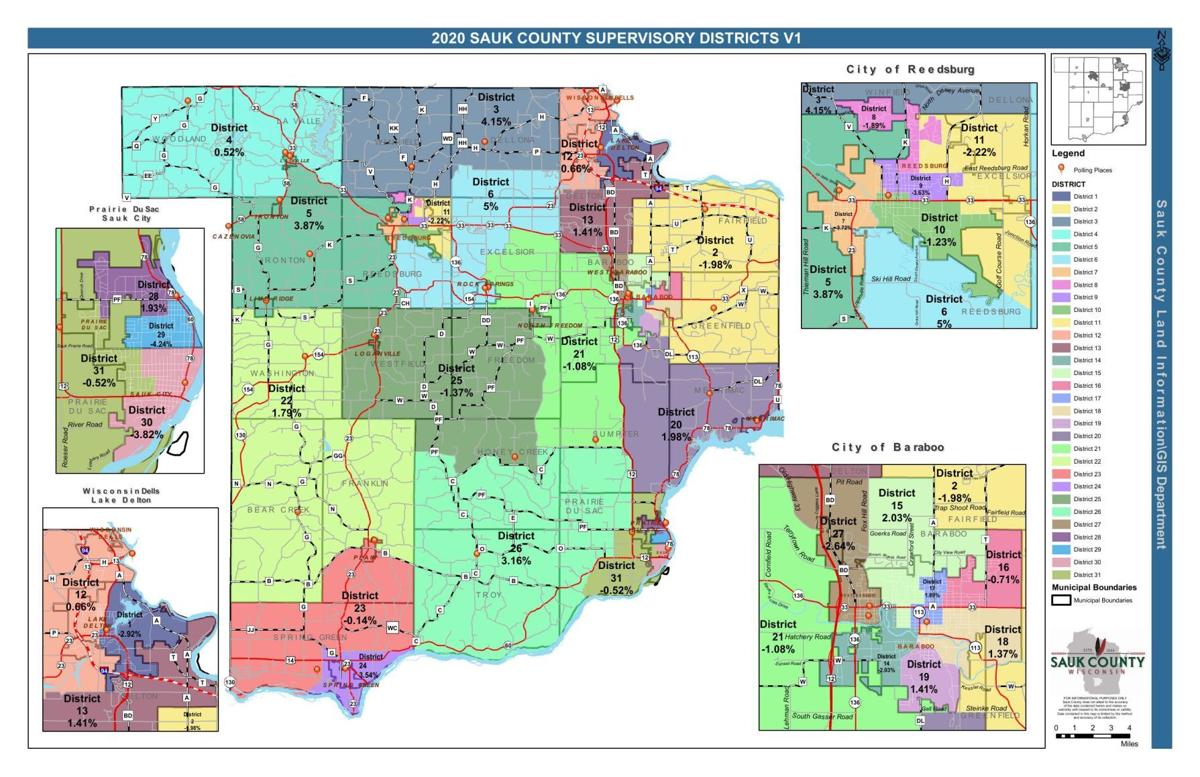 The districts and schedule for creating them are dictated by State Statute 59.10. Part of redistricting includes setting a number of supervisors for the county. Corporation Counsel Brian Desmond told supervisors in an Aug. 31 special meeting that the board had to choose a number that night in order to give enough time for the maps to be drawn. 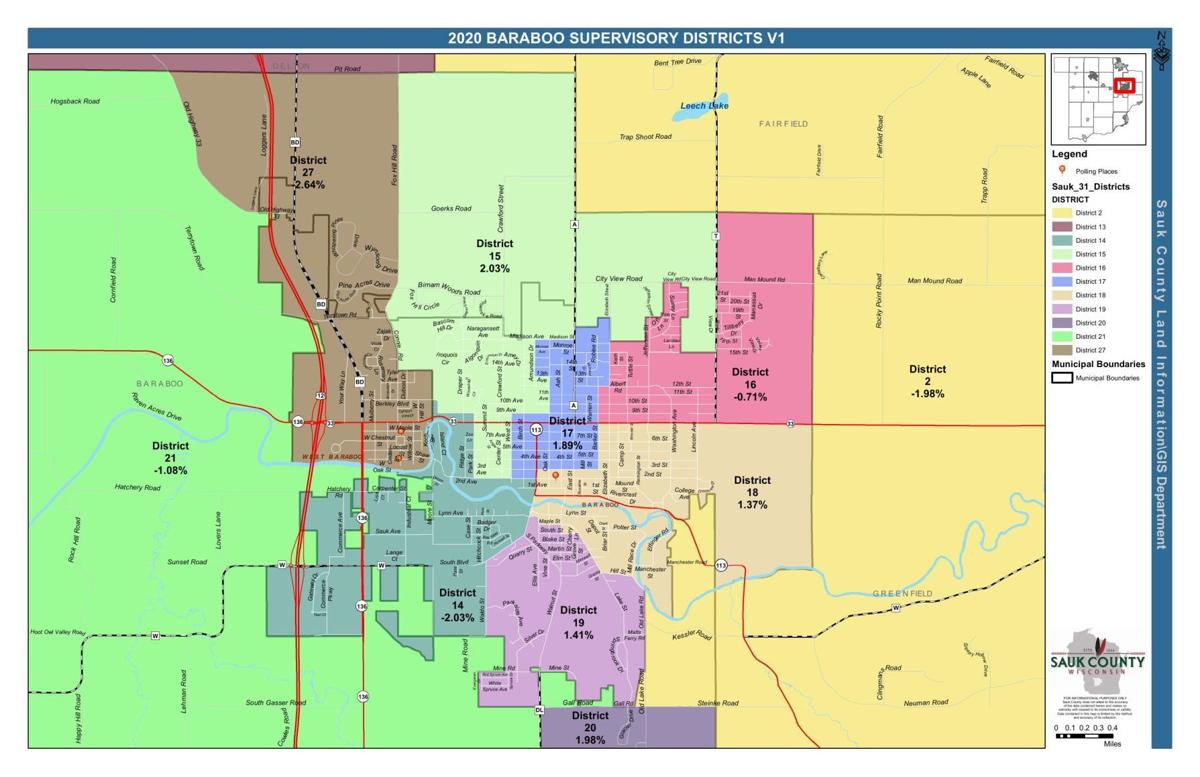 The special meeting at the end of August was held to decide whether to reduce the number of county board supervisory districts from 31 to 25. Most of the Sauk County supervisors who spoke on the subject voiced their opposition.

Supervisor Wally Czuprynko of Lake Delton moved for the reduction and said reducing the size of the governing body would mean increased efficiency, especially with the addition of a county administrator position within the last year.

“It’s actually very reasonable, it would be very prudent and very responsible for us to reduce the board size down to 25 and lead by example,” Czuprynko said, adding that residents have approached him asking for a smaller county board.

Supervisor Bryant Hazard of Baraboo said he didn’t see how a smaller board would mean better representation or efficiency.

“I think it’s a disservice to our citizens to have more people,” Hazard said. “Their representation gets diluted by having a bigger district. Just because other counties around the area have reduced their board size; if my neighbor paints my house pink, I’m not going to do it just because they do. I don’t find that as a viable reason at all. I think what we have is working in this county and I think we should leave it the way it is.” 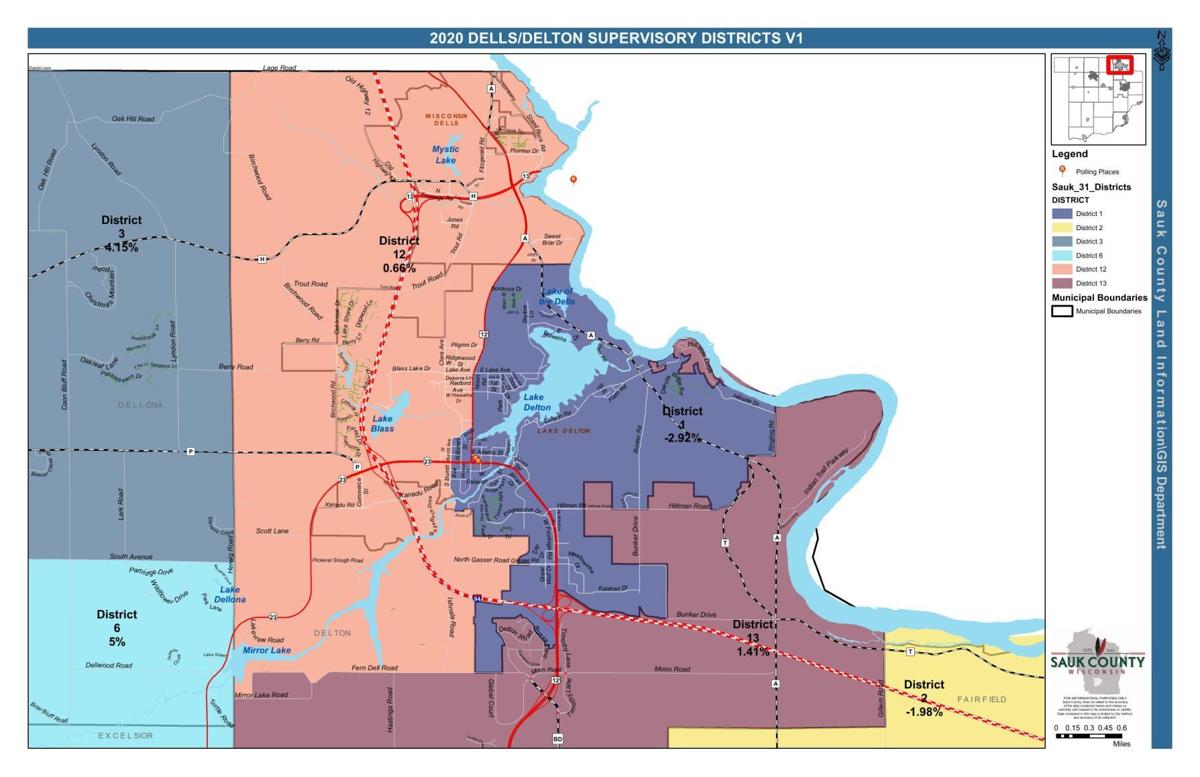 Supervisor Marty Krueger of Reedsburg denounced the idea of increased efficiency as a result of a smaller board and scoffed at Czuprynko’s assertion that the average supervisory district in the state is made up of about 8,000 constituents, noting that the larger counties like Dane and Milwaukee tip the average up. He proposed his own number of 27, which he said he has advocated for in the past.

During that meeting, supervisors voted to change to 27 districts, which failed on a split 15-15 vote. Supervisor Smooth Detter was absent. An amendment to change the resolution from 25 proposed districts to 31 passed 19-11, with Lynn Eberl, Rebecca Klitzke, John Deitrich, Tom Dorner, Tim McCumber, Michelle Bushweiler, Brian Peper, Brandon Lohr, Carl Gruber, Joel Chrisler and Czuprynko voting against it. The resolution, which was reworded to have 31 districts, passed 20-10 with the same votes with the exception of a vote in favor from Eberl.

The total population divided by 31 means districts must be populated to 2,121 within a plus or minus 5% limit. Fleischmann said that as mapping reaches municipalities, because of the number requirement, mapping uniformly becomes more difficult.

Town of Baraboo Clerk Morgan Olson spoke during the public hearing on the redistricting map. Olson said the tentative plan would add another district that would require the town to obtain an additional poll book for 92 residents, which also creates more work for already overtaxed poll workers.

Detter expressed concerns over this type of strain on municipalities. With the time constraints brought on by delays, McCumber said the planners would have to try to manipulate the map that night during a recess of the board.

Fleischmann said he understood the frustration, but shifting one thing creates an effect on other districts. McCumber echoed the sentiment and said he understood as an appointed representative of a town himself. Winfield Town Clerk Teresa Bass spoke in favor of the maps, glad that the new lines improved efficiency in her town.

After approval by the county board, the maps are sent to municipalities to determine wards. Within 60 days of today, wards must be outlined and submitted to the county board, which must then hold a public hearing and adopt the final plan by numbering each district.

A vote to approve the tentative maps passed 25-1 with Detter in opposition. Supervisors Tommy Bychinski, Shane Gibson, Peper and Krueger were absent.

Editor's note: This article was updated Sept. 21 to reflect that both Olson and McCumber serve in appointed positions for towns within Sauk County.

Gary and Penny Kowalke, lifelong residents of the Baraboo area, said they were glad to get the chance to support an outdoor recreation structu…

Baraboo council to use grant funding for economic planning

Baraboo Common Council members on Tuesday approved hiring a company to create an economic development plan for the city.

A revaluation of citywide property after more than a decade prompted owners to seek adjustments after an average 25% increase in home assessments.

Baraboo Riverfest aims to celebrate 20 years after removal of dams

Twenty years ago, every dam was removed from the Baraboo River, which drew protests from naysayers convinced the waterway would be ruined.

A Reedsburg man faces up to six years in prison and a maximum fine of $10,000 after being charged with felony child abuse.

A man who was on probation faces nearly 44 years and fines up to $65,500 for allegedly selling methamphetamine from his Lyndon Station home.

Sauk County Supervisor David Riek of Spring Green evaluates the proposed district maps Thursday as he speaks during a special county board meeting to approve the tentative redistricting of the county within the time constraints dictated by state statute.

Town of Baraboo Clerk Morgan Olson asks the Sauk County Board of Supervisors to consider changing the redistricting map to avoid extra costs and time for elections in the town Thursday during a special board meeting.