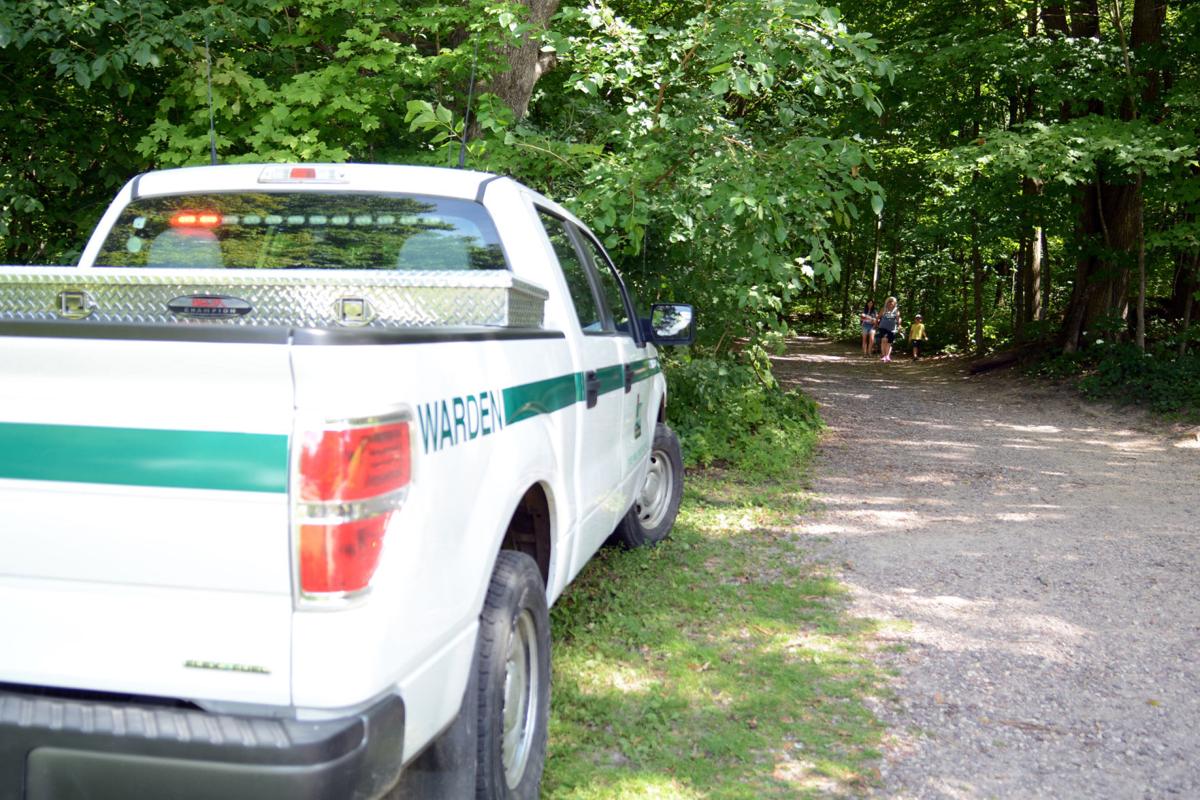 A DNR warden truck sits at the entrance of the East Bluff Trail as visitors hike at Devil's Lake State Park in August 2019. Emergency responders were in the area to rescue an injured climber. During the summer, there are 10 wardens assigned to Sauk County state parks, including the warden supervisor. 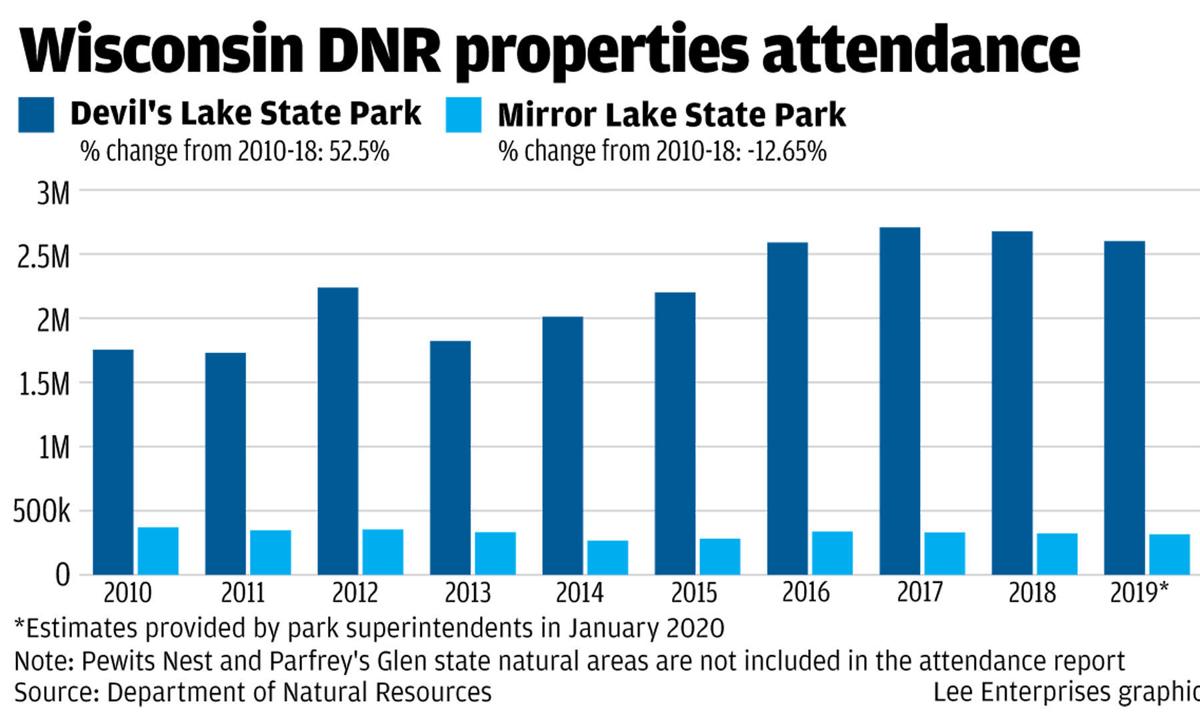 “The people that come to the park are usually not looking to get in any trouble, and it’s a very safe place to be in general, you know, for the amount of people that are there,” said Mike Green, a conservation warden supervisor for the state Department of Natural Resources.

He oversees the seven full-time positions and two part-time summer positions that are responsible for all of Sauk County’s DNR properties, including Devil’s Lake. They are the only credentialed law enforcement — meaning they carry firearms and have arrest powers — working regularly at the county’s four state parks.

Including himself, that means there are 10 wardens working in the county during the peak summer season, splitting their time between various properties based on usage. They also drive through the properties daily, Green said.

The lack of park staff and security cameras at Devil’s Lake made statewide news after a 24-year-old Wauwatosa man was stabbed and killed Oct. 14 near the railroad tracks on the south shore. At a press conference Nov. 11, Det. Lt. Chris Zunker of the Sauk County Sheriff’s Department said he doesn’t think the lack of cameras “contributed to” the homicide or has made the continuing investigation any more challenging. Many public locations, including in cities and other less remote areas, aren’t captured on security footage, he said.

While Zunker acknowledged the danger caused by a homicide suspect at large, he said that risk exists in every community and not specifically at Devil’s Lake.

Green, who has served in his current position for the last six years and spent the previous 12 years as a field warden in the Wisconsin Dells area, said he hasn’t noticed any change in the general level of safety at Devil’s Lake over the last decade. Wardens have gotten more calls, but only in line with the increase in visitors, he said.

“Our attendance is higher, and our attendance because of COVID was higher, but I always try to explain it that, you know, the parks in general are a really safe place to be,” Green said.

Wardens’ response time to calls also hasn’t changed over the years, especially for Devil’s Lake, he said. As the state’s most visited park, it gets the most coverage by law enforcement. Then supervisor Steve Schmelzer estimated it had about 2.6 million visitors last year, up by almost 50% since 2010, when the DNR reported roughly 1.75 million visits. Nearby, Mirror Lake State Park attendance has dropped slightly from 369,000 in 2010 to an estimated 315,000 in 2019.

Capt. James Hodges of the sheriff’s department said he has no concerns about security at state parks. “Life safety” calls this year have been the same as other years, he said, though he echoed that state parks across Wisconsin were “busy beyond belief this year” due to COVID-19.

“Are you safe? Absolutely. I don’t even think about it,” Mayoleth said.

However, in some situations — such as a fall or injury — it might be difficult to get help because there’s nobody nearby, he said. Mayoleth said the odds of seeing a warden while visiting the park this late in the season are low. On a busy summer day, they’re a common sighting near the beaches and day-use areas.

Hiring more wardens and installing security cameras, especially at the outlying parking lots where car break-ins are more likely to occur, would be beneficial, he said.

Just a few years ago, park rangers provided law enforcement at DNR properties. The state agency removed their law enforcement credentials under a realignment plan in 2018 and instead shifted those duties to conservation wardens. Issues including additional costs and travel caused the DNR to change course again later that year.

But the DNR also added some positions at the same time to help compensate for the change: Green said his Sauk County ranks grew in 2018 from two full-time wardens to seven (not including him) and two additional limited-term positions. The amount of time that a credentialed law enforcement officer is on the property at Devil’s Lake is similar to years before, Green said.

Devil’s Lake State Park encompasses roughly 10,000 acres, according to its 2019 visitor guide. A 2014 DNR fact sheet states that Sauk County had almost 36,000 acres of state-owned lands open to public hunting and outdoor recreation, which would all fall under a Sauk County warden’s purview.

In July this year, there were an average of eight wardens working various shifts per day on weekends at the park and up to five working per weekend, according to Missy VanLanduyt, DNR recreation partnership section chief. There were around 18 staff working at the property each day.

Mayoleth said he now observes wardens more often than he used to see park rangers at the outlying Steinke Basin, a change he welcomes.

“The wardens are visibly doing an amazing job compared to the rangers that were there just a couple of years ago — and that isn’t the fault of the rangers at the time,” Mayoleth said. “The rangers were constrained in being able to do what they should have been doing.”

He said there are both advantages and disadvantages to the previous system of having credentialed rangers dedicated to a property. For example, rangers would be very familiar with the park and know its problem spots, but their numbers dropped over the years, making their presence practically invisible, he said. They also had to answer to the “local politic,” he added.

While wardens probably aren’t as familiar with each individual property — because they oversee several — they aren’t beholden to local authorities, freeing them up to do their jobs, Mayoleth said. They do “an amazing job,” managing pets, parking and other issues “that for years were ignored,” he said.

As coronavirus cases continue to surge, local health officials are urging residents to stay home throughout the holidays to avoid making the s…

More than 40 acres of former farmland northwest of Portage will be restored to wetland next year, the first Columbia County property to join t…

Almost a year after the Wisconsin Department of Natural Resources closed two popular state natural areas near Baraboo, it quietly reopened the… 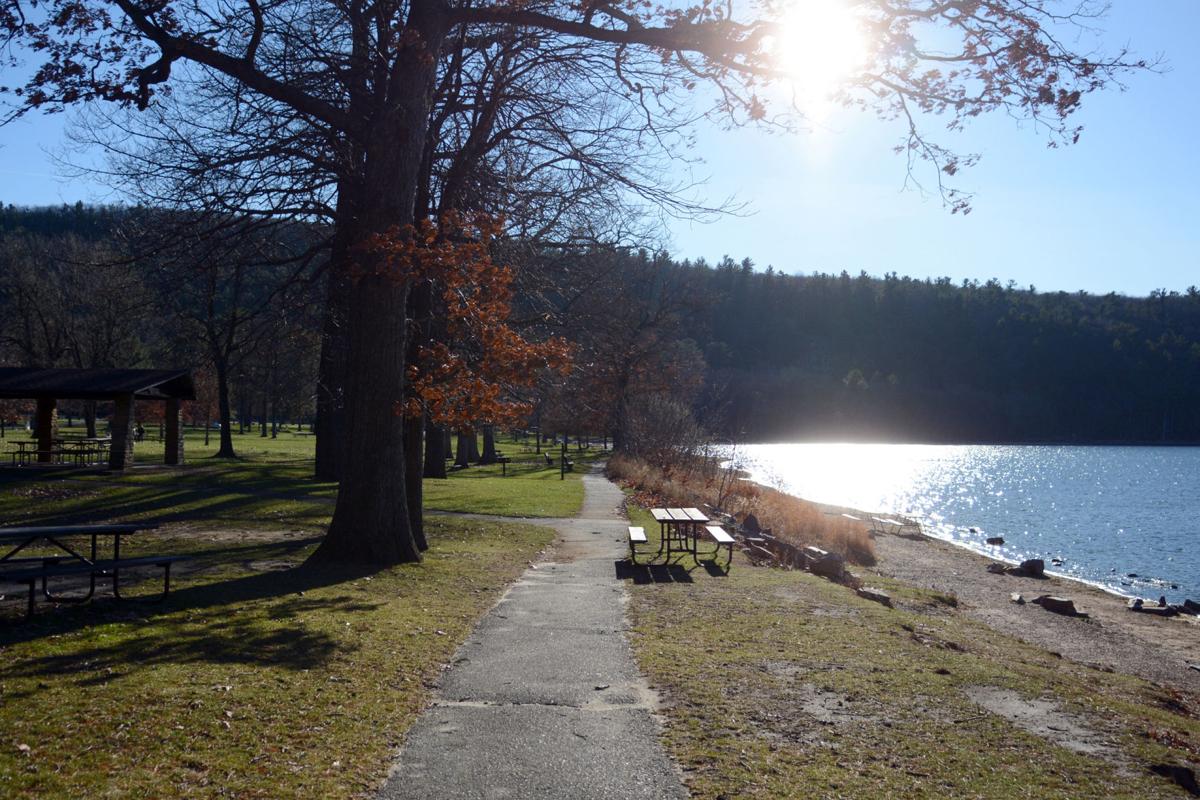 The sun descends on a quiet evening Nov. 17 at Devil's Lake State Park's south shore. Service calls to Sauk County dispatch and DNR wardens about the park have skyrocketed in recent years, according to records released to the News Republic. 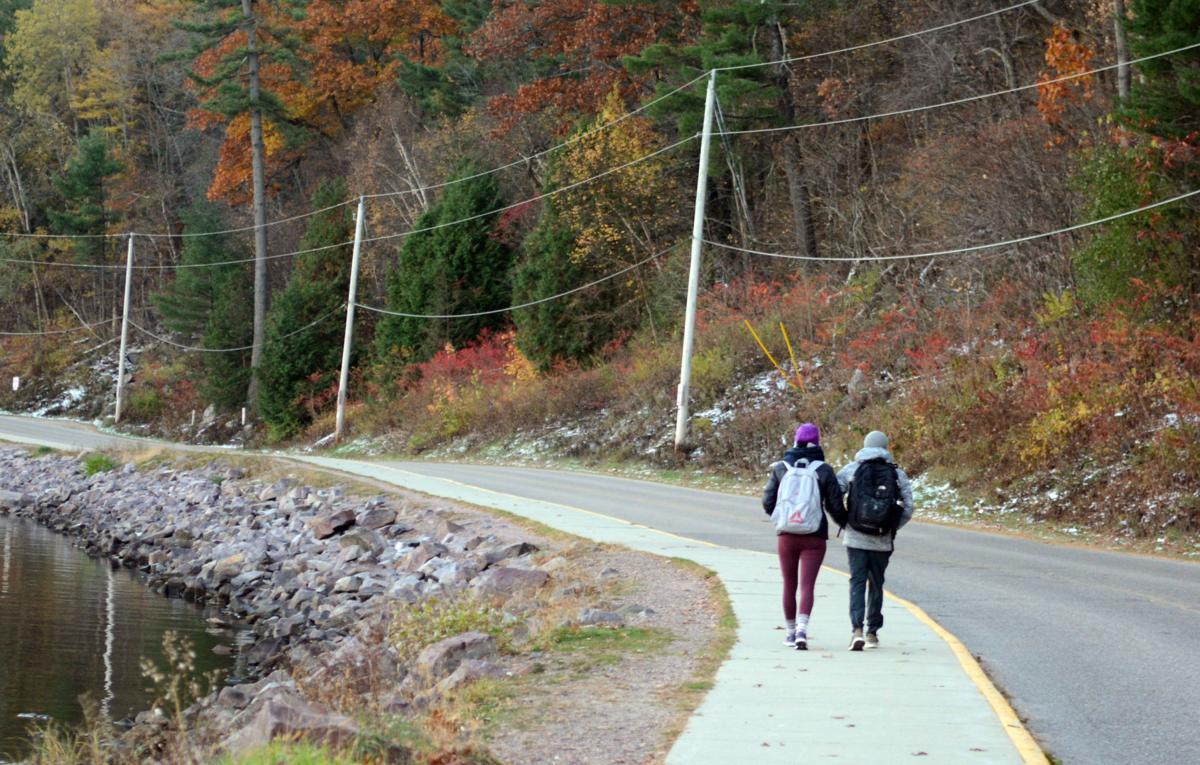 Visitors walk along South Lake Drive on Oct. 27 at Devil's Lake State Park. Service calls to Sauk County dispatch and DNR wardens about the park have skyrocketed in recent years, according to records released to the News Republic. 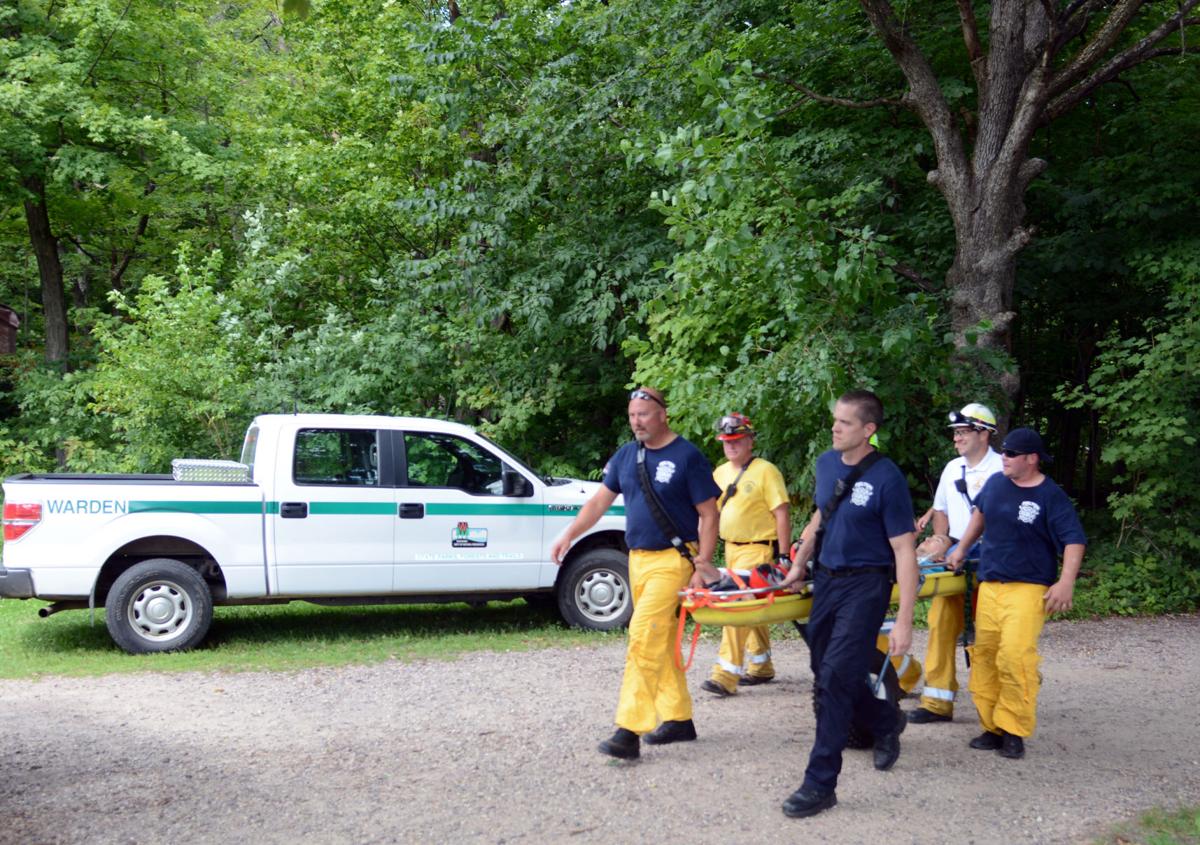 Emergency responders carry an injured climber to an ambulance at the East Bluff Trail entrance in Devil's Lake State Park in August 2019.

A DNR warden truck sits at the entrance of the East Bluff Trail as visitors hike at Devil's Lake State Park in August 2019. Emergency responders were in the area to rescue an injured climber. During the summer, there are 10 wardens assigned to Sauk County state parks, including the warden supervisor.