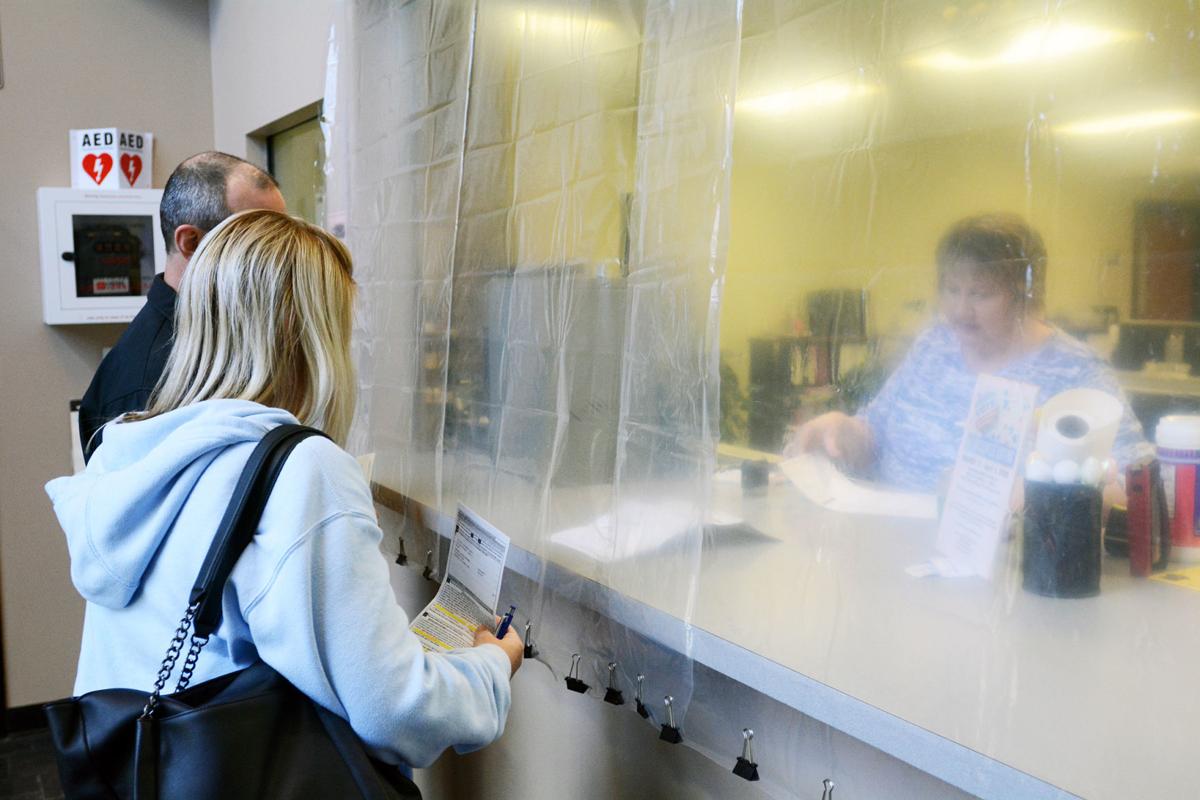 City of Portage Deputy Clerk Becky Ness, right, explains absentee ballots to Mike and Lisa Bitter from behind a sheet of plastic Friday at City Hall. Organizers plan to have curtains hanging in front of poll workers Tuesday if the election goes on as scheduled. 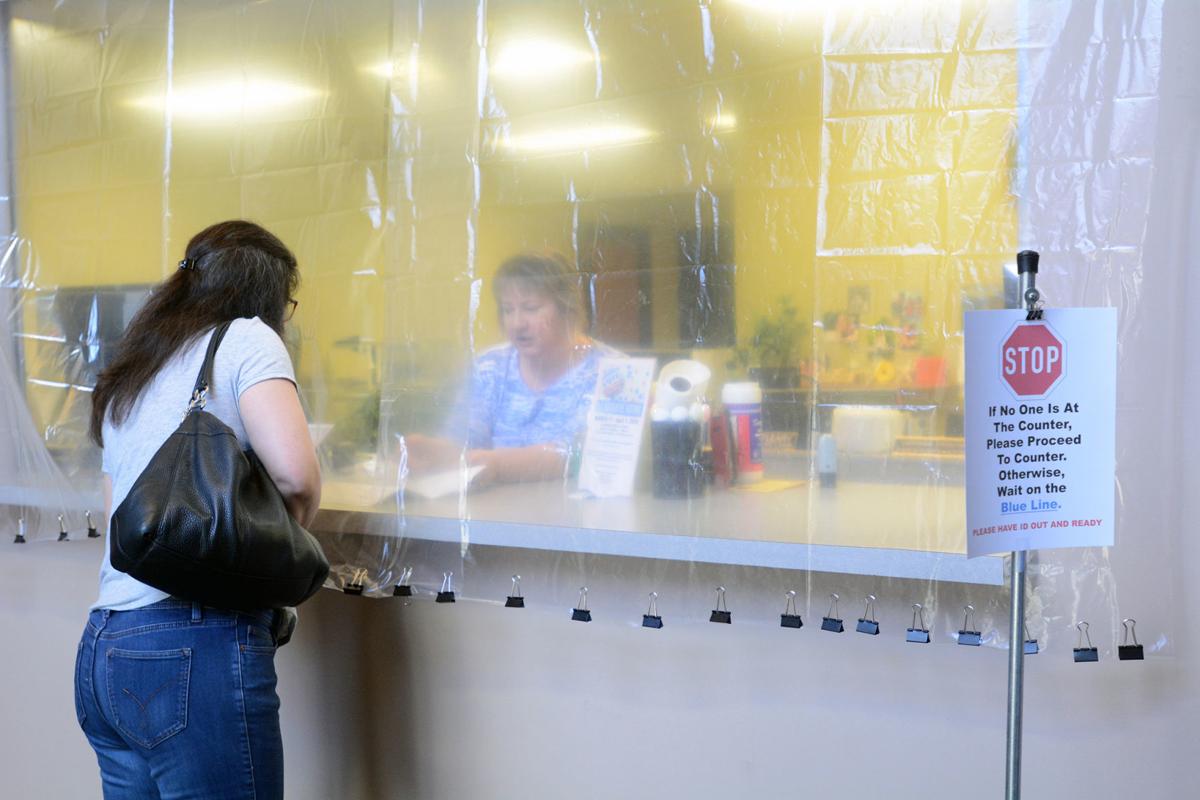 Becky Ness, deputy clerk for the city of Portage, explains the absentee ballot process to a voter Thursday from behind a sheet of plastic at the Portage Municipal Building. Organizers plan to hang curtains of plastic in front of poll workers Tuesday if the election goes on as scheduled.

Both Portage and Baraboo city clerks feel lucky in their circumstances as the Tuesday spring primary looms and a number of Wisconsin municipalities are lacking the poll workers needed to execute an effective election.

“We are fortunate,” Portage City Clerk Marie Moe said. “We have a full crew of poll workers.”

A full team is about 20 people, Moe said. Only one declined to work on Election Day over health concerns surrounding COVID-19, the novel coronavirus that has caused a pandemic, prompting social distance rules and mandated business closures in an effort to reduce the spread of the pneumonia-like illness between people.

“We’re fine with that because we want them to be healthy,” Moe said.

In Baraboo, City Clerk Brenda Zeman said the city would generally have about 30 poll workers and about nine others to help inspect and process ballots. Because of health concerns, there are only about half that many workers available for Tuesday. Still, Zeman considers herself fortunate because she has been able to enlist city staff to help ensure the election runs smoothly if it moves forward.

“I’m probably one of the lucky municipalities where I can rely on other departments,” Zeman said, listing workers from a variety of places throughout the city. “The support from the other departments is phenomenal.”

A number of poll workers in Baraboo are a part of the age group of concern for serious complications if they become ill with the virus that humans currently have no immunity against. Zeman said she “can completely understand where election workers are coming from” in wanting to stay home and away from possible transmission. Some may be doing it for their own health, others could be trying to keep compromised family members healthy. According to the Centers for Disease Control and Prevention, the virus can be spread to others even if the carrier shows no symptoms of illness.

As of Friday, the election is still going on as planned, despite criticism of holding a large gathering during a pandemic. If it proceeds, both cities have goals to keep everything as clean as possible as residents come in to cast their ballots.

At the Baraboo Civic Center, staff will be on hand to wipe down and sanitize surfaces, voting booths and pens as residents vote. Zeman said they plan to relegate certain parking spots in the small lot for curbside voting, making it possible for some voters to cast a ballot from the relative safety of their vehicle.

Voters will be screened at the door and hand sanitizer will be readily available. Absentee voting in person at Baraboo City Hall ended Friday at 5 p.m. Signs 6 feet apart encouraged people waiting in line to maintain space between them. Executive Secretary Donna Munz greeted voters at the door, donning a plastic glove and grabbing a disposable sanitizing cloth to wipe down the booths after voters finished filling out their ballots. Pens were tossed in a box to be sanitized before another use.

On Friday afternoon in Portage City Hall, absentee voters were greeted with a big sheet of plastic covering the clerk’s counter window. Deputy Clerk Becky Ness handed out ballots from behind it. They plan to have a similar barrier in front of poll workers Tuesday.

For the election, Moe said poll workers will encourage voters to wash their hands before and after voting. They plan to limit the number of people allowed into the lower level of the municipal building and Moe said they want to encourage voters to come in as a single unit rather than in groups if possible. No identifications will be touched by poll workers and the electronic poll books, Badger Books, will be cleaned after every voter signs the screen.

“We are looking at trying to follow all the guidelines and keep everyone safe while at the same time ensuring they have their right to vote,” Moe said.

People seem appreciative of the work the city has been doing to keep everyone healthy, she added. For Zeman, the work of many people has been a meaningful collaboration.

“It’s like the entire city has come together to make election day happen,” she said. “It’s really great.”

Laura Walczak, president of SSM Health St. Clare Hospital-Baraboo, said the goal of the hospital is to prevent the spread of the novel coronav…

Baraboo leaders on COVID-19 response: 'We got this'

Baraboo Police Chief Mark Schauf was reassuring in his comments to the public and council members Tuesday during a special meeting.

Baraboo schools to pay 80% of contract fee to bus company for April, May due to COVID-19 closures

Precautions for voting Tuesday in Portage didn’t surprise the voters already used to it for the past several weeks.

City clerks say they have seen a significant uptick in the number of people requesting absentee ballots for Tuesday’s election.

City of Portage Deputy Clerk Becky Ness, right, explains absentee ballots to Mike and Lisa Bitter from behind a sheet of plastic Friday at City Hall. Organizers plan to have curtains hanging in front of poll workers Tuesday if the election goes on as scheduled.

Becky Ness, deputy clerk for the city of Portage, explains the absentee ballot process to a voter Thursday from behind a sheet of plastic at the Portage Municipal Building. Organizers plan to hang curtains of plastic in front of poll workers Tuesday if the election goes on as scheduled.