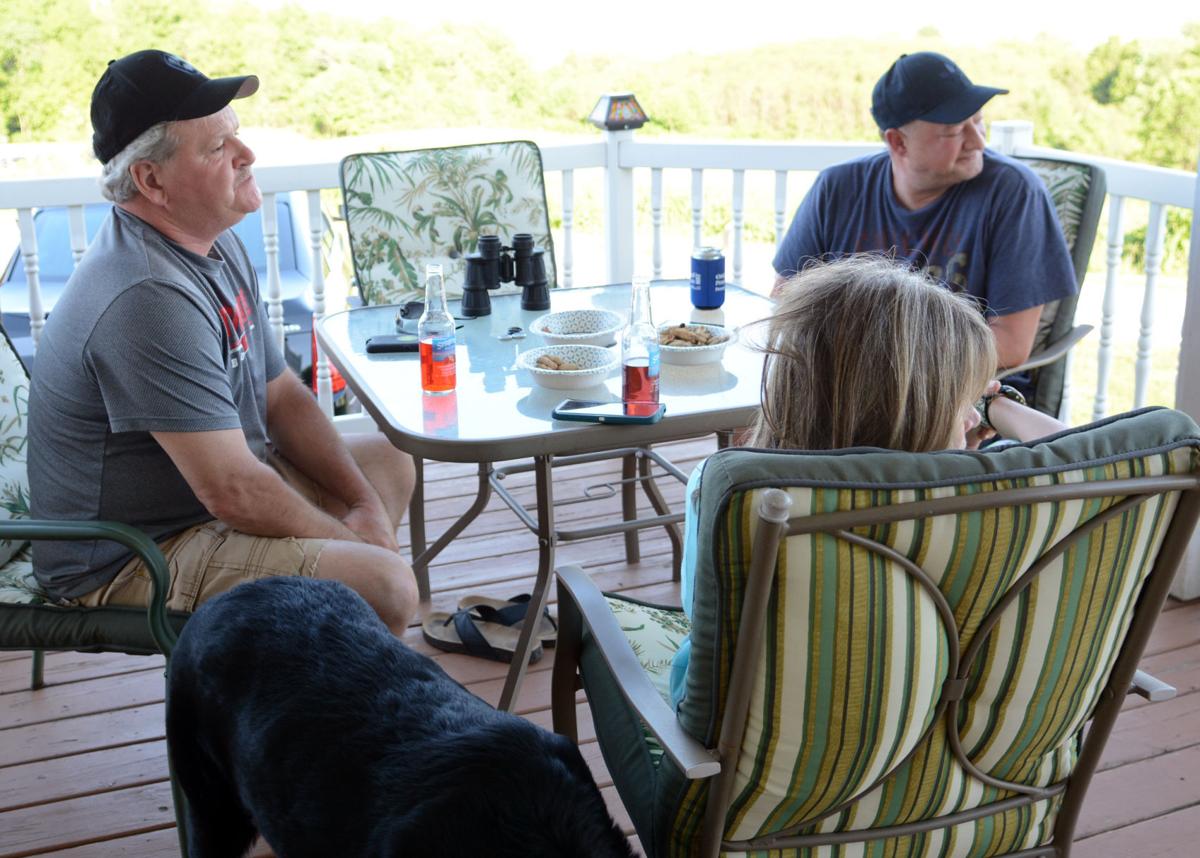 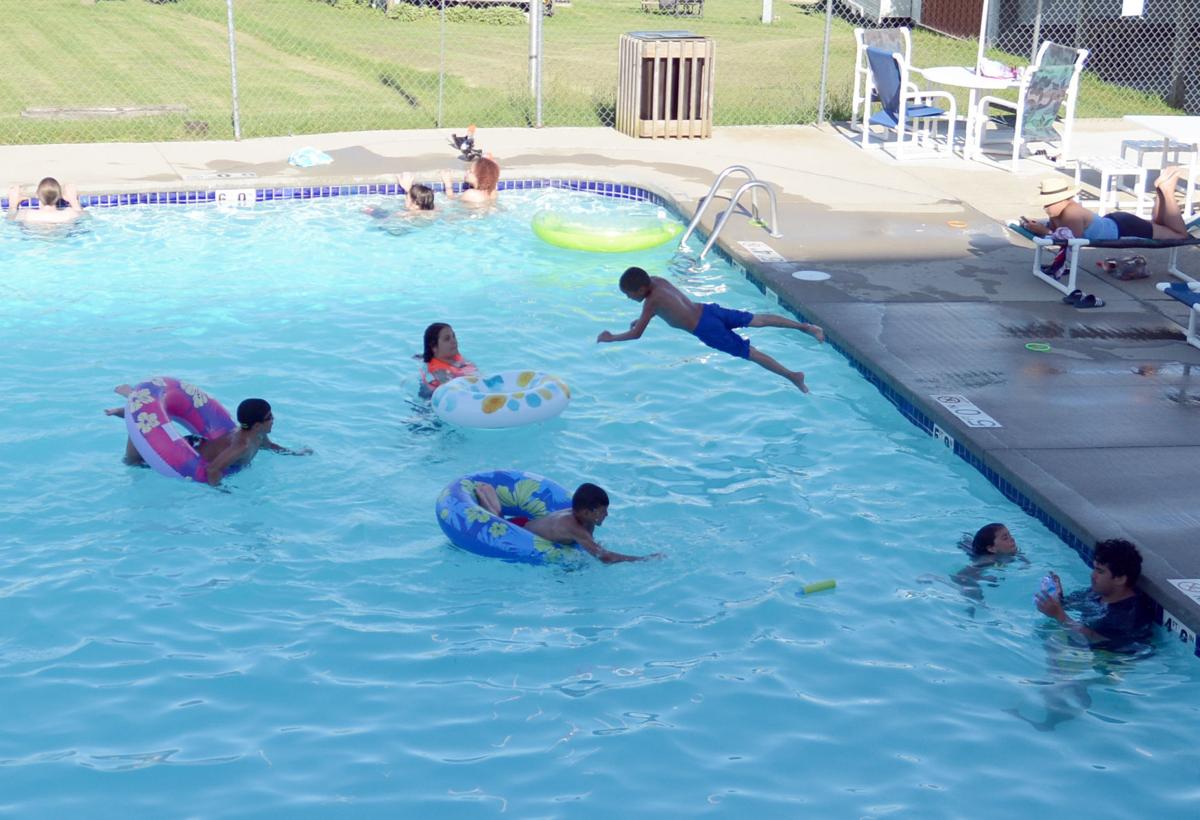 Guests use the pool Friday afternoon at Sky High Camping Resort near Portage. 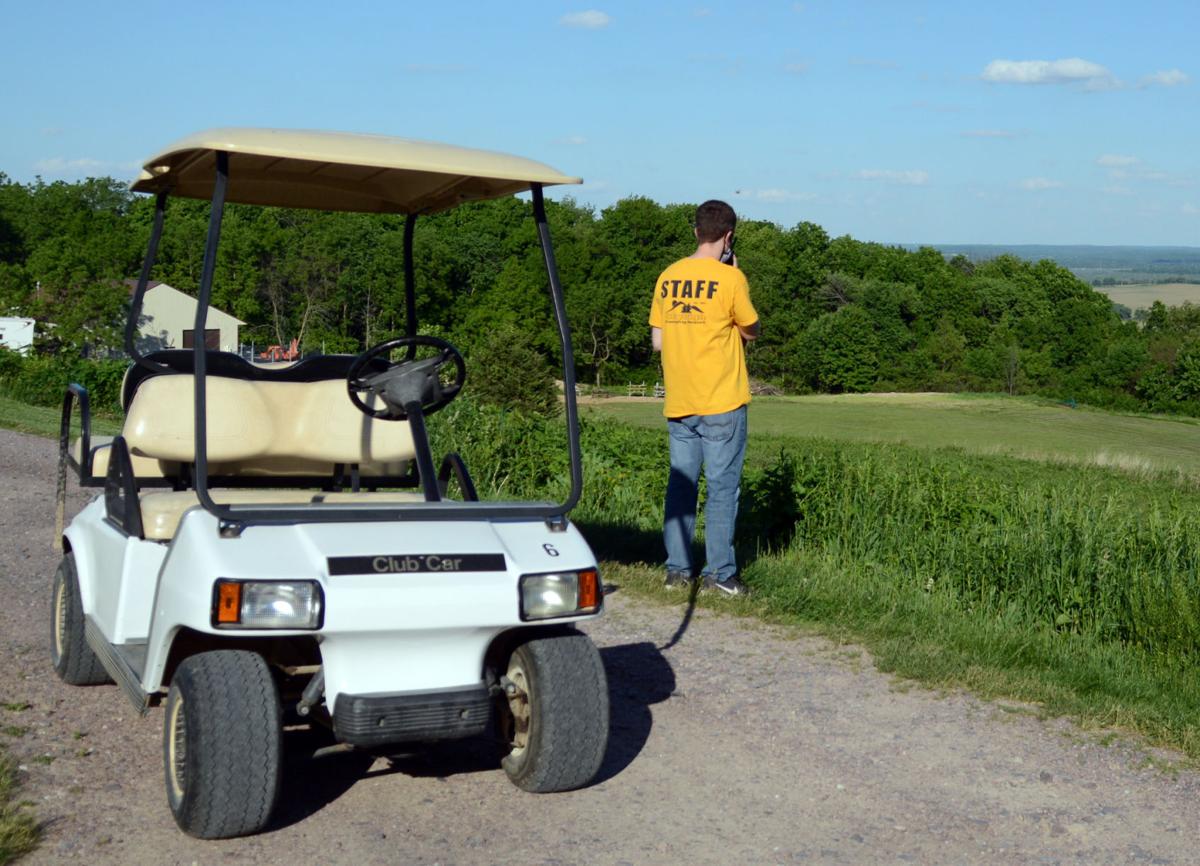 Manager Patrick Lindman responds to a call on a two-way radio Friday afternoon at Sky High Camping Resort near Portage. 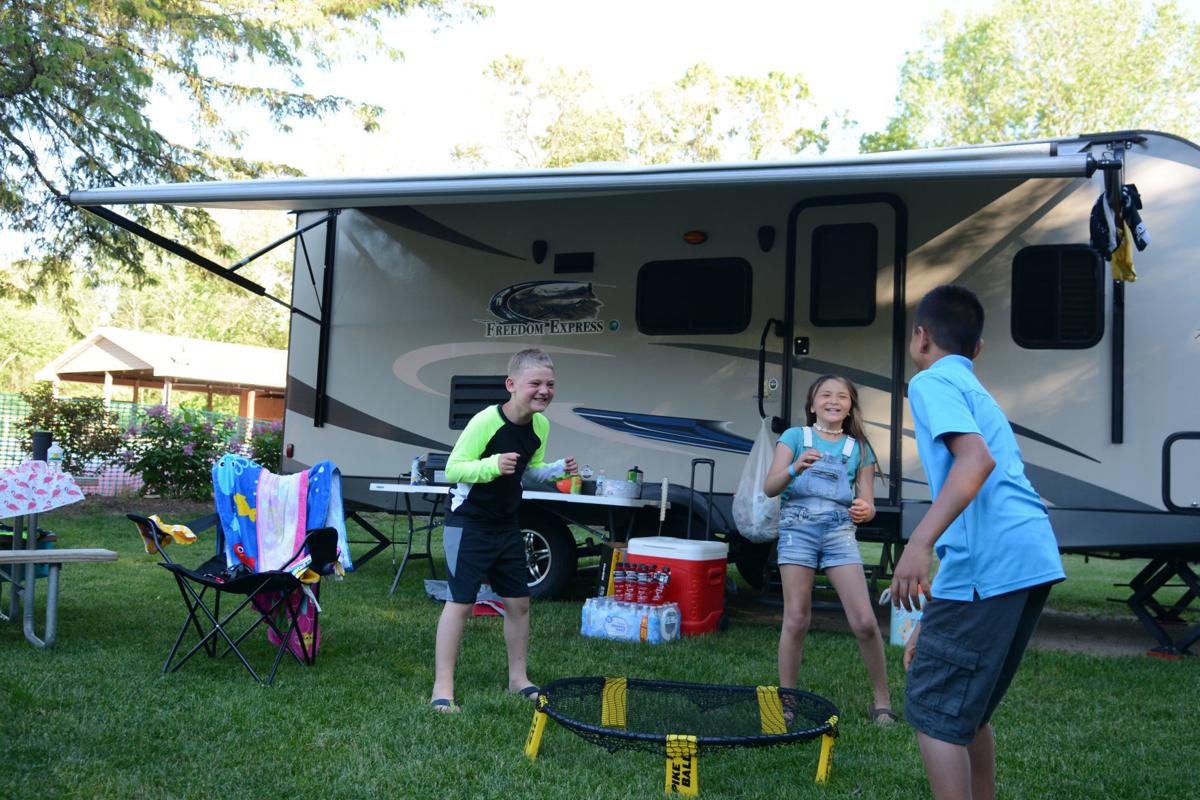 The Reicherts of Appleton, from left, Landen, 8, Kaylee, 10, and Jaydin, 14, laugh while playing a game Friday evening at their Baraboo Hills Campground site. They said they were enjoying the campground, especially the pool and “jump pillow.” 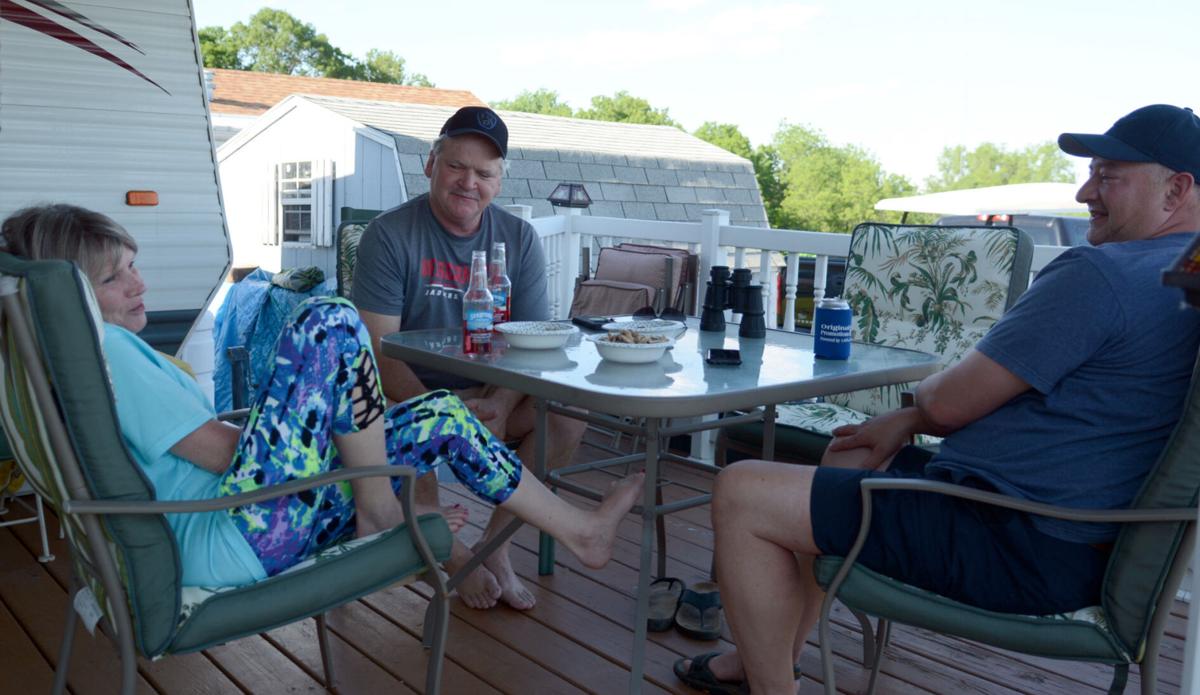 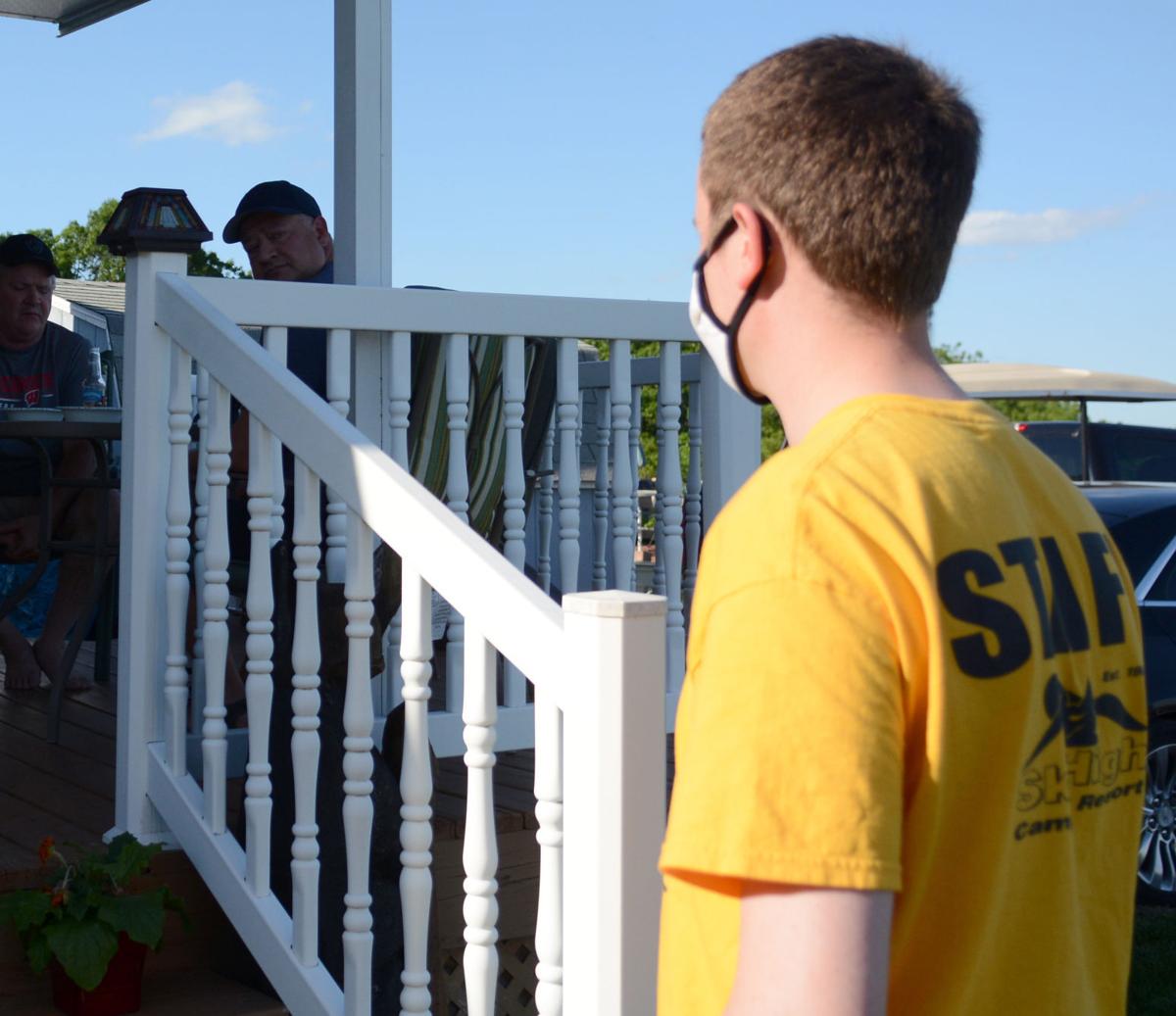 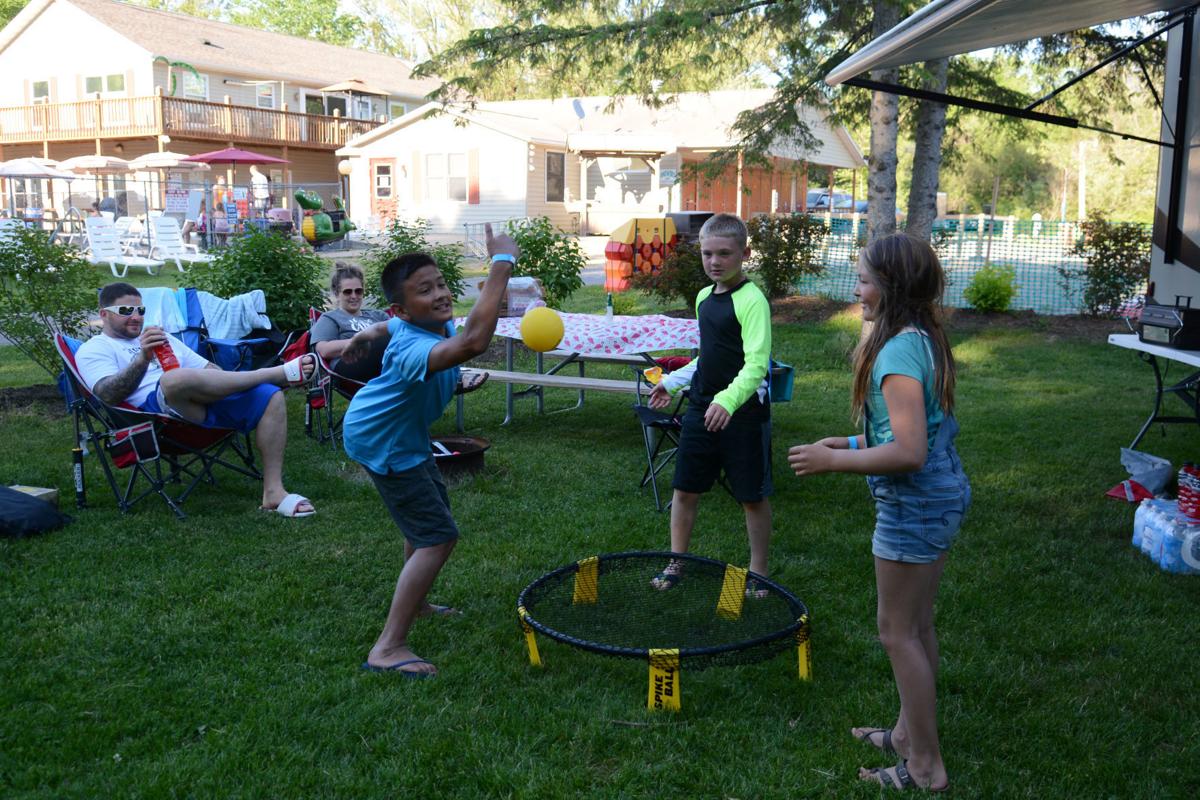 Jaydin, 14, reaches for the ball while playing a game Friday evening with Landen, 8, center, and Kaylee, 10, at their Baraboo Hills Campground site. The Reicherts of Appleton said they were enjoying the campsite, especially the pool and “jump pillow.” 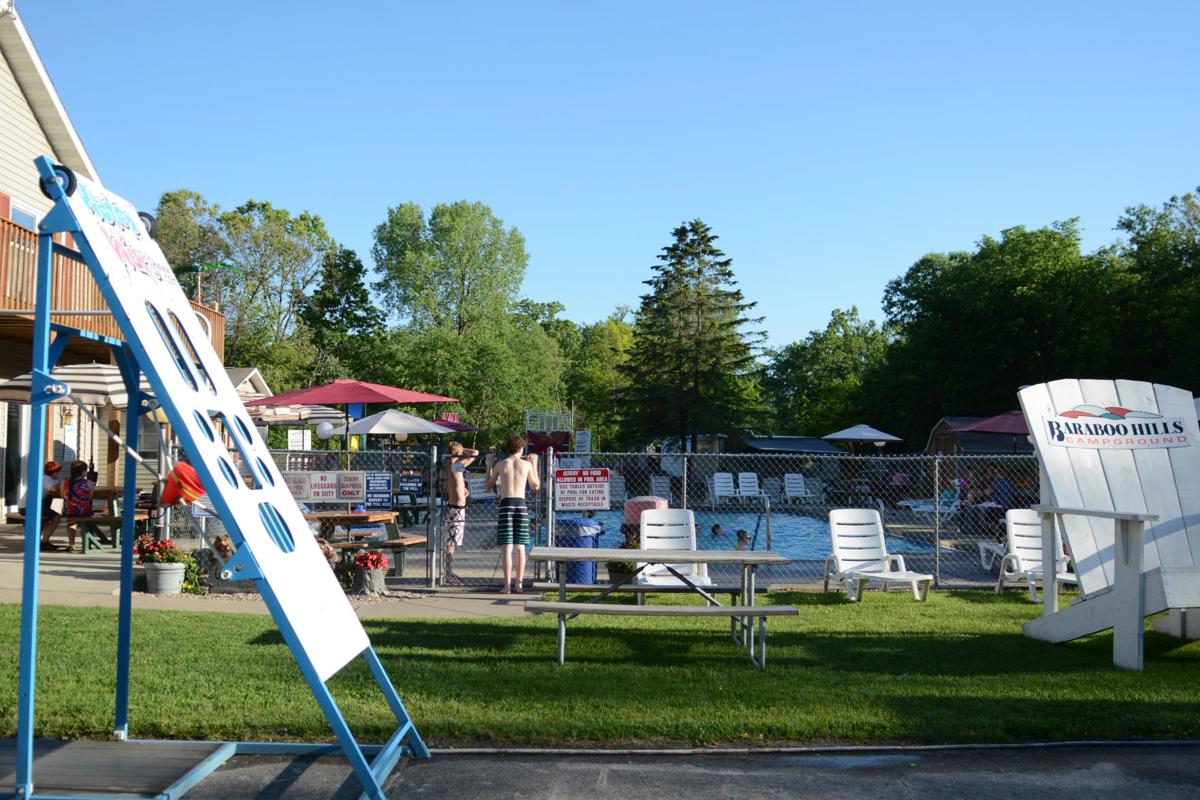 Guests use the pool Friday evening at Baraboo Hills Campground near Baraboo. 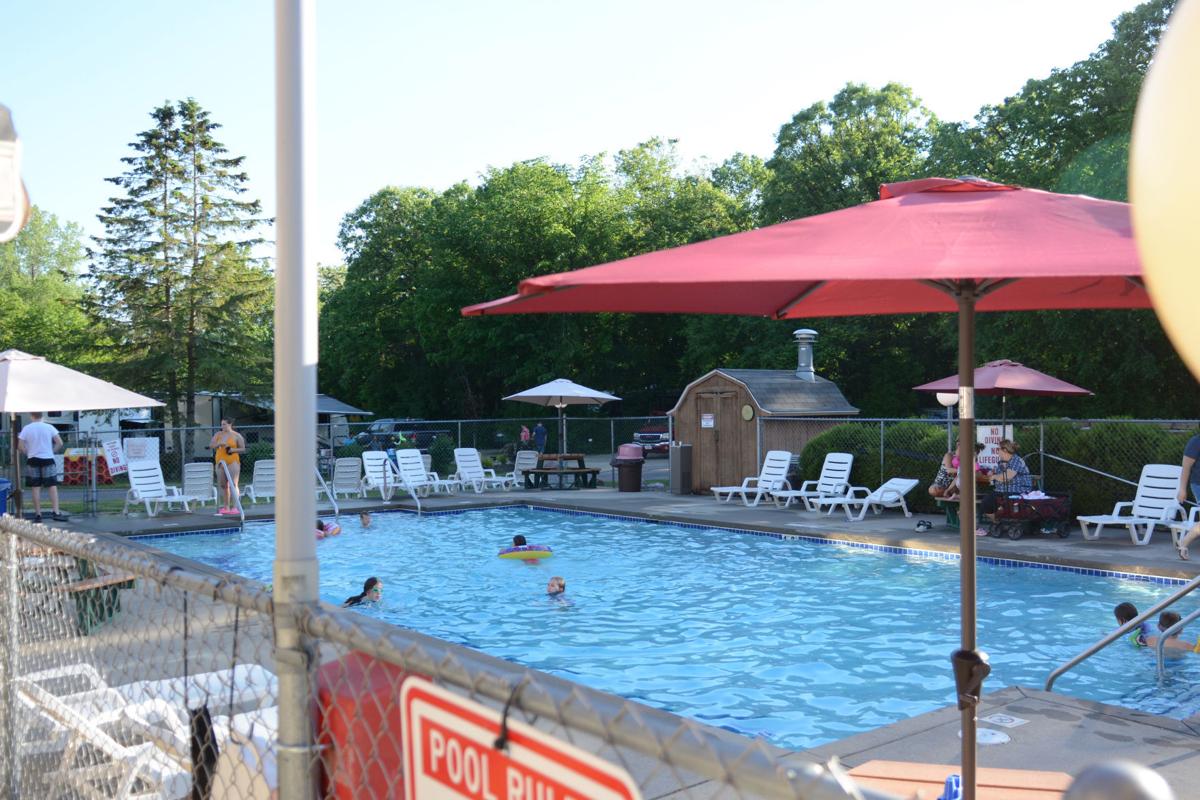 While state parks gear up to reopen campgrounds Wednesday, private campgrounds in Sauk and Columbia counties have provided recreational opportunities since at least April that their staff say are a natural fit for social distancing.

Eric Anderson, owner of Sky High Camping Resort near Portage, said the business remained open throughout Wisconsin’s stay-at-home order because it’s considered essential and even offered space for any Divine Savior Healthcare workers to park an RV at no cost in March and April.

The campground is following safety and sanitation guidelines recommended by the Centers for Disease Control and Prevention and the Wisconsin Economic Development Corporation to help lower the chances of spreading the new coronavirus, said Manager Patrick Lindman. That includes regularly sanitizing equipment and facilities, hanging plastic barriers in its store to prevent contact between staff and guests and requiring staff to wear masks and gloves when social distancing is difficult.

“We’ve been doing what we can and trying to accommodate everybody along the spectrum,” from those who take the threat of COVID-19 very seriously to those who don’t, Lindman said. “We’re trying to play to everybody, which has been difficult.”

But the concept of camping, whether by tent, trailer or rental unit — thoroughly cleaned and sanitized between each reservation — pairs well with the current need to distance from other people, he said.

“We really think that camping is a natural fit for social distancing with at least a minimum of 10 feet in between each trailer on each campsite, so it just lends itself to social distancing,” Lindman said, “and then the outside aspect of hiking and the different hiking trails that we offer just allow people to spread out on our property and follow social distancing while still having some sort of entertainment during this time.”

To limit the risk of infection, people should stay in their local area when exploring the outdoors, according to recommendations from the Wisconsin Department of Health Services and the CDC. Health officials also recommend recreating with fewer than 10 people — ideally from the same household — practicing social distancing and washing hands frequently.

Baraboo Hills Campground started allowing camping April 17 under Sauk County’s phased reopening plan that required social distancing, extra sanitation and guests to have their own self-contained unit with a bathroom, said Laurie Adams, who owns the business with her husband, Greg. She said no one called to make reservations until after the state Supreme Court struck down the state’s stay-at-home order.

Now the campground allows tents and its pool and restrooms are open again. Adams said sanitation stations are set up throughout the property.

“It’s safe, it’s outdoors, it’s family friendly and we all need a vacation after all of this,” Adams said. “And everyone is just social distancing on their own, so we’ve been very careful.”

While “reservations are definitely down” because of COVID-19, Baraboo Hills has served guests who would have stayed at a Devil’s Lake State Park campground if they’d been open, she said, noting that it sold out on Memorial Day weekend.

In a normal year, Anderson said Sky High fills all 250 campsites for Memorial Day weekend about a month before the holiday. But when the stay-at-home order took effect in March, reservations stopped coming in for a couple of weeks. Then some started trickling in again, while others cancelled.

“Ultimately, it was sort of up and down there a bit for the next few weeks, but we sold out like normal three, four weeks ahead of the Memorial Day weekend. So, we were sold out again but, of course, business was not usual,” Anderson said. Sky High’s store limited the number of people who could be inside at any given time and its pool remained closed.

Even when the property was filled to capacity with about 1,000 people, they practiced social distancing and, for the most part, stuck to their own campsites, Anderson said. The resort has been sending a letter to guests ahead of their reservation asking them to bring their own food, supplies and sporting equipment instead of relying on Sky High’s rentals.

Now the pool is open, as the one at Baraboo Hills, Merry Mac’s Campground in Merrimac and other private businesses.

For seasonal guest Mike Hensmann of McHenry, Illinois, Sky High is an “oasis” he visits for a week or two at a time during summer. He, John Casey of Portage and Debbie Rizzo of Lake Villa, Illinois, said they were glad to have the option available while they socialized around a table Friday at a trailer on the grounds.

“It’s our home away from home,” Hensmann said.

State campgrounds, including those at Devil’s Lake, Mirror Lake near Lake Delton and the MacKenzie Center near Poynette, will reopen Wednesday with special conditions, according to a Wisconsin Department of Natural Resources new release. Group camping, shelters and amphitheaters will stay closed through June 30.

Campers can make reservations by phone or online only, as park offices remain closed. Instead of checking in at an office or visitor station, campers can go directly to their campsite, which property staff will monitor, the release said. Most restrooms at state properties have been reopened, but equipment rentals and firewood remain unavailable. Firewood should be purchased within 10 miles of the camping location, a rule meant to protect local trees from pests and diseases.

The DNR notes that properties will be closed if they reach capacity limits. Pewits Nest, Parfrey’s Glen, Dells of the Wisconsin River and Gibraltar Rock state natural areas are closed.

Guests use the pool Friday afternoon at Sky High Camping Resort near Portage.

Manager Patrick Lindman responds to a call on a two-way radio Friday afternoon at Sky High Camping Resort near Portage.

The Reicherts of Appleton, from left, Landen, 8, Kaylee, 10, and Jaydin, 14, laugh while playing a game Friday evening at their Baraboo Hills Campground site. They said they were enjoying the campground, especially the pool and “jump pillow.”

Jaydin, 14, reaches for the ball while playing a game Friday evening with Landen, 8, center, and Kaylee, 10, at their Baraboo Hills Campground site. The Reicherts of Appleton said they were enjoying the campsite, especially the pool and “jump pillow.”

Guests use the pool Friday evening at Baraboo Hills Campground near Baraboo.