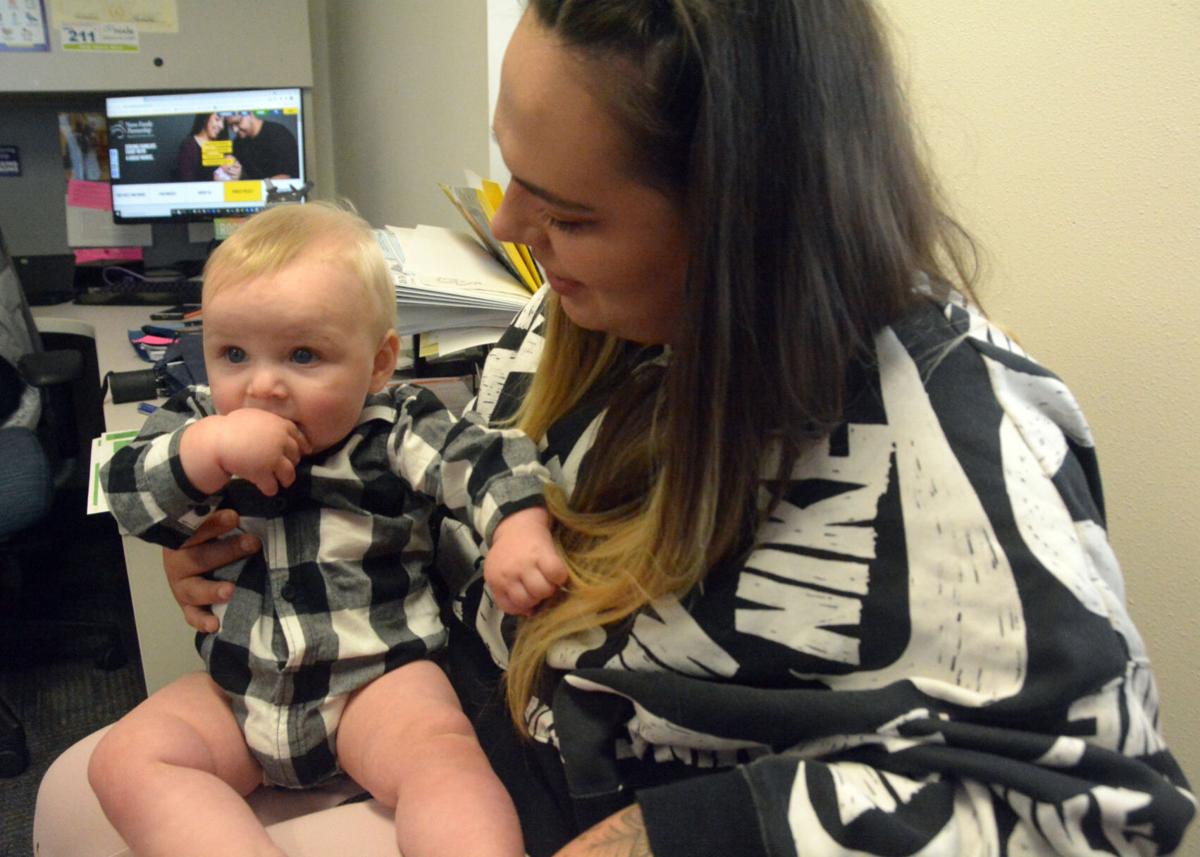 Jordyn Brownell, 21, of Baraboo, and a first time mom, holds her son, 8-month-old Malcolm, during a visit to Missy Kirchstein, a nurse with the Nurse Family Partnership that Brownell joined when she was around 16 weeks pregnant. 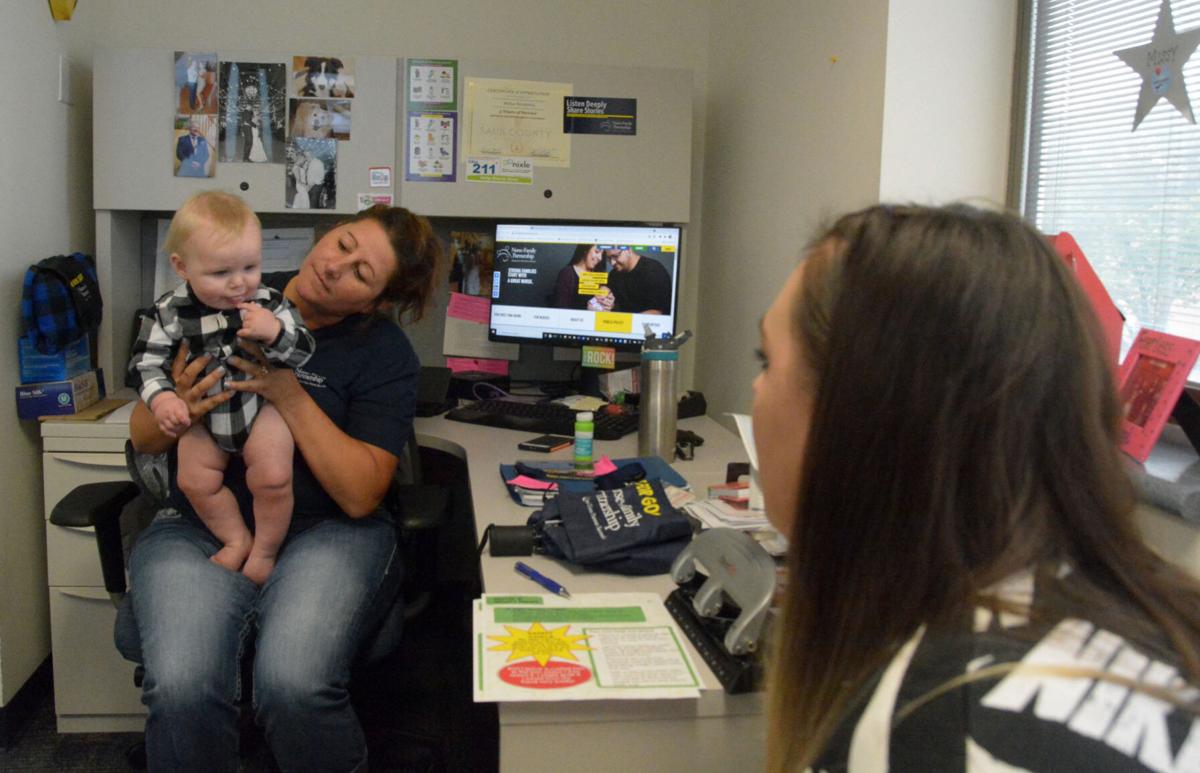 Nurse Missy Kirchstein holds 8-month-old Malcolm as she listens to his mom, Jordyn Brownell, ask a question Wednesday during an appointment as part of the Nurse Family Partnership, meant to help new parents from pregnancy until the child turns 2. 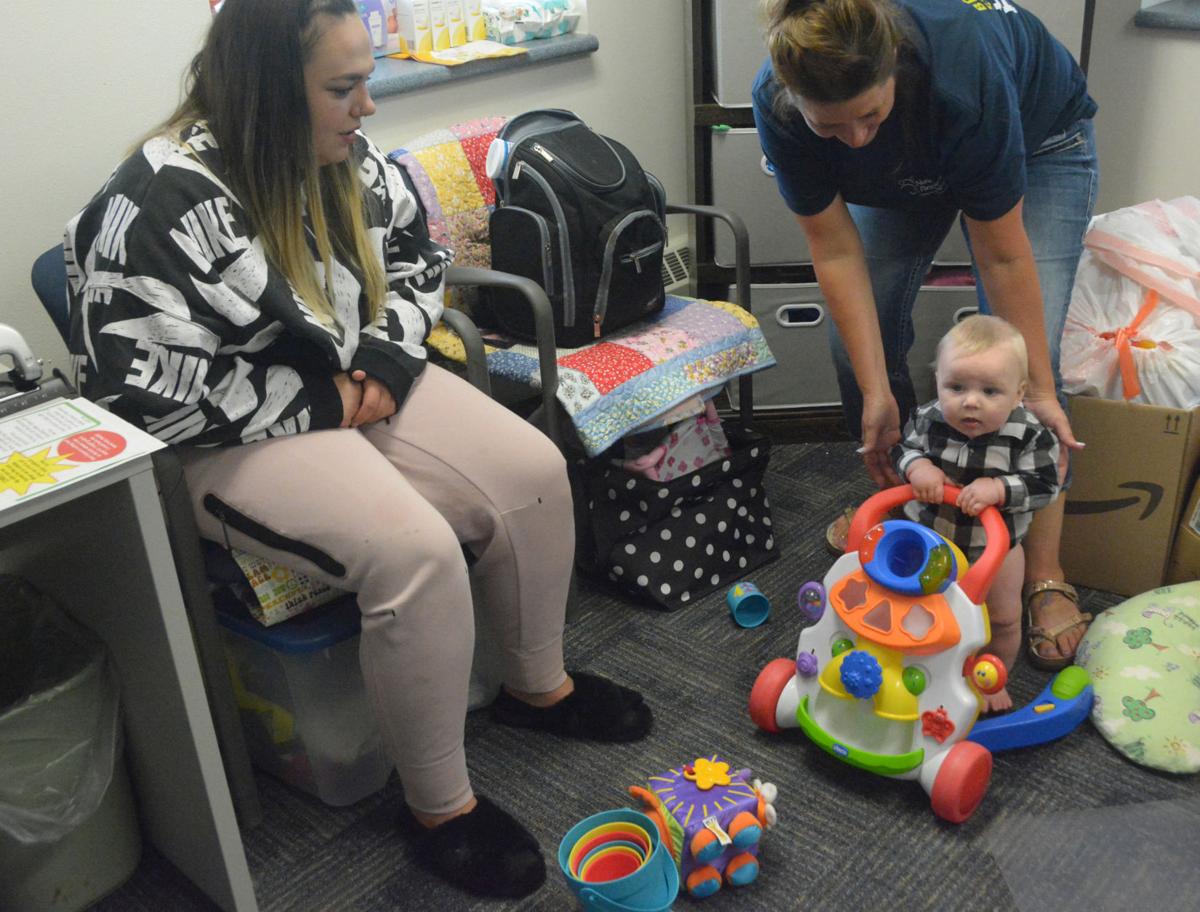 Nurse Missy Kirchstein, right, offers support to 8-month-old Malcolm as his mom, Jordyn Brownell, watches him hold himself up on a toy Thursday in Kirchstein's office at the West Square Building. Brownell's family is one of 18 clients Kirchstein currently oversees through the Sauk County Nurse Partnership Program for first-time parents.

Registered nurse Missy Kirchstein has been overseeing clients in the Sauk County Nurse-Family Partnership for six years and recently noticed a decrease in its numbers.

It could be the interruption of the COVID-19 pandemic, or possibly a dip in pregnancies in 2020. It might even be a recent wave of graduations from the program, but she wants first-time parents to know the resource is available.

“We try to serve as many families as possible,” Kirchstein said. “Sometimes people don’t have any support. But there’s never too much help. Any help is good help.”

Enrollment in the program is for first-time parents only, regardless of age, before 28 weeks gestation. They must qualify for either the supplemental nutrition program Women, Infants, and Children or the state Medicaid program BadgerCare Plus.

Through the partnership, five nurses within the county typically handle 23 families or clients. Kirchstein said she now has 18 to oversee.

“It kind of ebbs and flows,” Kirchstein said, noting there isn’t usually a waiting list for referred clients.

The program pairs a nurse with parents to aid them in the process of birth and through development until the child is 2 years old. Nurses like Kirchstein answer questions, check that the infant is meeting learning and developmental milestones and even refer them to other programs if they need assistance.

For 24-year-old Summer Elder of Baraboo, Kirchstein was a “godsend.”

“We were really scrambling to get everything together,” Elder said of her and husband Ethan. “We didn’t know what we were doing and having Missy was a godsend, because we just had nobody.”

Elder had just decided motherhood wasn’t for her when she found out she was pregnant with her now 2-year-old son Finn, who graduated from the partnership program Wednesday. A WIC agent referred them early in her pregnancy.

“We jumped on that because we didn’t really have a lot of family or friends that had children, so any support meant the world to us,” Elder said.

Baraboo resident Jordyn Brownell, 21, was referred by her doctor to Kirchstein when she was roughly 16 weeks pregnant with her now 8-month-old son Malcolm. She said she and her partner Mike also hadn’t planned on becoming pregnant at that time and at the beginning, she was worried “about everything.”

“I was scared and I think that her just being there to guide me through everything, that really, really helped me,” Brownell said. “Very, very helpful. I think especially for young parents like myself. He wasn’t planned, so having that crutch right there has benefited us more than I think anything else could.”

Elder said she also benefited in a number of ways from Kirchstein’s support. Her son needed help with speech and Kirchstein was able to enroll him in another county program called Birth to 3 to help address the learning delay.

Kirchstein was also a reassurance during her pregnancy.

“I didn’t realize how painful pregnancy was,” Elder said. “It was nice to hear that everything I was going through was normal and just having somebody there to tell me that I wasn’t crazy, those things do happen, was reassuring.”

With the hurdle of a pandemic, Kirchstein said the department had to change its method of operation, switching from home visits to phone calls and making videos of each nurse to highlight what they are like and what they do to help the family.

“I don’t know necessarily that our numbers are down a pinch because of the pandemic,” Kirchstein said, adding that the adjustments helped in a way. I think there might be a little bit of hesitation with people, with the pandemic, maybe not ready to start. I think we’ve also become a little bit more versatile. … Now we have the opportunity to just call instead or do the video thing and so it takes a little bit less time and fits into our schedule. I think, ultimately, we weren’t super excited about not being able to meet with our families, but the way it worked out, it became almost a benefit at the same time.”

Both Brownell and Elder had begun seeing Kirchstein in person before measures to reduce the spread of COVID-19 were implemented. Neither said they enjoyed the shift. Brownell said she worried over how it could help her while she was still pregnant, but said it ended up beneficial to them. Elder said she was just glad to get back to in-person exchanges because it meant Kirchstein could effectively evaluate Finn.

“It felt like we were losing an aunt,” Elder said. “I was excited when we were able to see her again. We kind of missed her.”

Brownell said she is happy that a friend recommended she pursue enrollment in the program and that others should know about its benefits.

“Nurse Missy and the program helps us a lot, and probably more than I realize right now, but when he gets older I’m going to look back and think ‘I’m so glad I had that,’” Brownell said. “I don’t think I would be where I am, or Mike even with how we parent Malcolm, if we didn’t have Nurse Missy.

Elder said she feels that there should be a similar program in every city.

“It was so helpful to us and I can imagine it being very helpful to other young parents who don’t know what they’re doing,” Elder said. “There are resources out there people don’t even know exist. They’re there to help whoever needs them and people shouldn’t feel ashamed to use them.”

Bello Nock has performed all around the world in a career that’s spanned more than 30 years as a circus performer and daredevil. However, to N…

Facing roughly 20 community members urging it to “unmask our children,” the Baraboo School Board decided Monday to end its mask requirement fo…

Masks optional for all ages in Baraboo schools starting July 7

Starting Wednesday, no one in Baraboo School District buildings will be required to wear a mask following another narrow vote by the school bo…

Health incidents and cases of influenza in the Baraboo School District were down significantly this school year, according to an annual report.

In his first Baraboo School Board meeting as district administrator Monday, Rainey Briggs said about a dozen families have chosen virtual lear…

Jordyn Brownell, 21, of Baraboo, and a first time mom, holds her son, 8-month-old Malcolm, during a visit to Missy Kirchstein, a nurse with the Nurse Family Partnership that Brownell joined when she was around 16 weeks pregnant.

Nurse Missy Kirchstein holds 8-month-old Malcolm as she listens to his mom, Jordyn Brownell, ask a question Wednesday during an appointment as part of the Nurse Family Partnership, meant to help new parents from pregnancy until the child turns 2.

Nurse Missy Kirchstein, right, offers support to 8-month-old Malcolm as his mom, Jordyn Brownell, watches him hold himself up on a toy Thursday in Kirchstein's office at the West Square Building. Brownell's family is one of 18 clients Kirchstein currently oversees through the Sauk County Nurse Partnership Program for first-time parents.