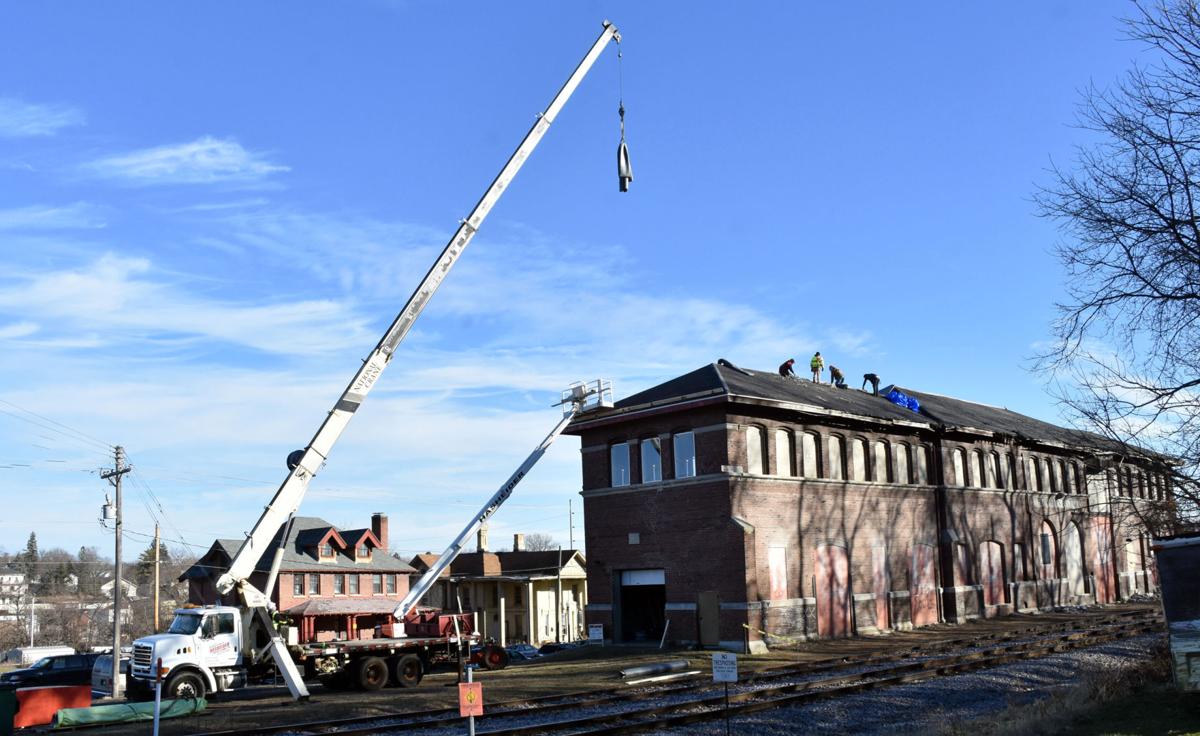 Workers with Hasheider Roofing & Siding of Prairie du Sac install a temporary rubber roof while the former Chicago & North Western Railroad depot, 240 Lynn Street in Baraboo, undergoes inspection and the Sauk County Historical Society plans its restoration. The society took ownership of the building in late October and has plans to renovate the building to be used as event space and to house historical exhibits. 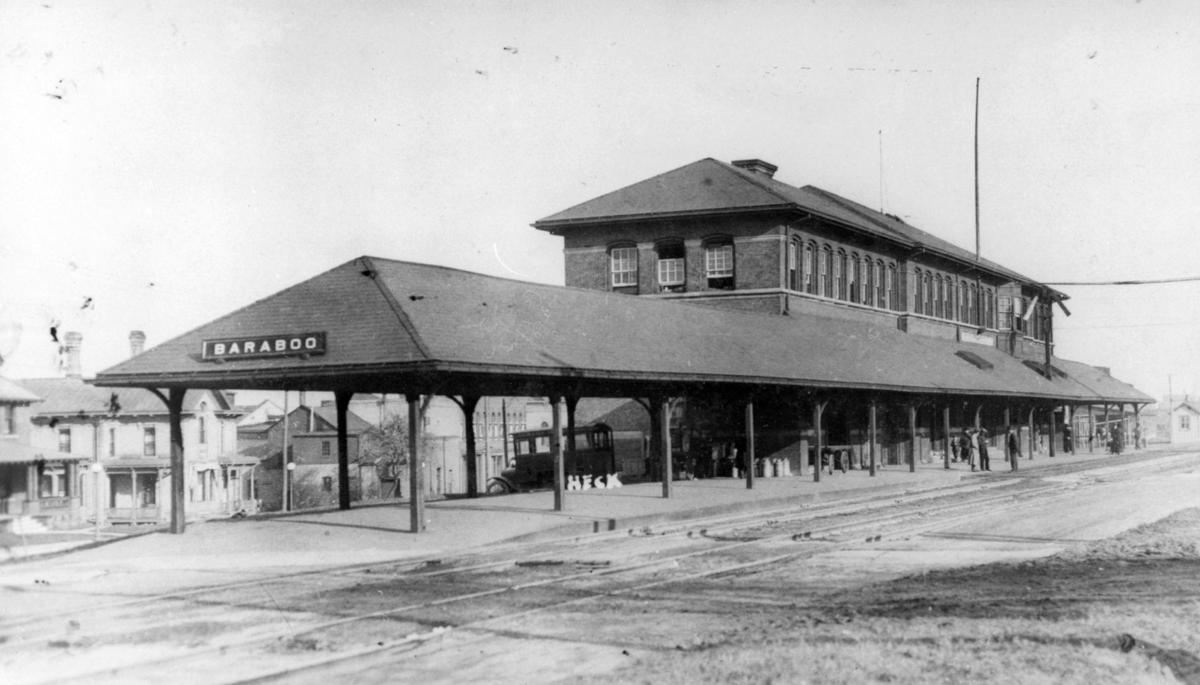 A historical shot of the former Chicago & North Western Railroad depot built in Baraboo in 1902 shows the structure with its original 300 feet of canopy in 1918 before it was torn down when the building was converted to a warehouse after operations ceased in 1963. The bustling administrative building had 16 passenger trains visit daily when it was in use.

The members aren’t sure what it will cost or how it will look, but the Sauk County Historical Society has plans to restore the former Baraboo train depot for new uses while also honoring its past.

Executive Director Paul Wolter said the goal is to highlight the past importance of the depot that helped the formation of the city.

“Our mission is to collect, preserve and share Sauk County history,” Wolter said. “I have kept my eye on that building for decades, really, and hoped that a private developer would possibly take it on, but that was just not happening. We decided it’s us or nobody.”

The historical society board took ownership of the former Chicago & North Western Railroad depot Oct. 23, when the family of Gordon and Ann Glorch turned it over to the group. A former administrative building for nearly 500 miles of track between Madison and Winona, Minnesota, the building is larger than most depots of its era because administrative offices were housed on the second floor, Wolter said.

The depot was built in 1902 and served hundreds of thousands of people as 16 passenger trains stopped and departed daily. There were separate men’s and women’s waiting rooms, a restaurant and baggage storage rooms on the first floor. Offices for those overseeing operations were on the second floor.

At its time of operation, the depot had almost 400 Baraboo residents as employees, from brakement to conductors, engineers to management staff. It ceased operations in 1963 and was converted into a warehouse. That’s when it lost a 300-foot canopy that distinguished it as a depot where passengers had previously waited.

The historical society plans to change that. Its first step is to get the funding for work related to its restoration. A grant from the Wisconsin Economic Development Corporation is one of the first steps.

The group is working on a Community Development Investment grant with the help of Sauk County Community Development Coordinator Jared Pinkus. The grant, which according to the WEDC website is meant “to incent primarily downtown community development” in the state, would help cover the cost of a historic structure report. The report is a study completed by an architectural firm that documents the history of the building changes, its current status and help determine an estimate for cost to restore the depot.

The grant, which is a matching sum that would require equal contribution from the historical society, would cover roughly $50,000 of the study that Wolter said would be six digits, but did not have a specific number. Pinkus said “a rough estimate” could be between $100,000 to $150,000.

Some railroad enthusiasts have already sent funds to help the project get underway, Wolter said, noting gratitude for the support. The historical society is currently accepting donations through its website.

Wolter said the aim of restoring the building would be to preserve its history. The society would also have more space to display some of its historical pieces there as it outgrows its current buildings. There would be a large event space on the second floor, while one of the waiting rooms could serve as a gathering space or for small weddings with a reception in the other room, Wolter said.

A big piece of the project would be the hopeful restoration of the canopy. Wolter said the outdoor space could also host markets and other outdoor events in favorable weather. Another large undertaking will be making the building constructed more than a century ago accessible with elevators and other pieces.

Pinkus said the restoration of the former depot would be a benefit to a portion of the city that has slowly been improving through projects but still has potential.

“The south side of Baraboo, there’s a ton of potential there, it’s almost like a whole second downtown,” Pinkus said. “This would be a huge, kind of a catalyst, to get everything up and going. There’s private investment coming into that part of town, which would then attract other businesses or developers to the area. It definitely has a potential draw for the community as a whole, but the impacts would be felt, really, on that side of the river.”

An apartment building with units that developers Rapid River Apartments of Sparta, formerly Three Amigos Property Management of La Crosse, have deemed as “luxury” is on schedule to be completed in December. The current plan calls for about 65 units to be constructed on the 1.6-acre parcel at 325 Lynn Street.

“The south side has come a long ways from 10, 15 years even, and with the new city hall and the new 65-plus unit apartment building that’s going up literally a block away from the depot, this area has great potential,” Wolter said. “The depot is right there in the middle of it all. A giant centerpiece that needs to be restored to anchor it all.”

Workers with Hasheider Roofing & Siding of Prairie du Sac install a temporary rubber roof while the former Chicago & North Western Railroad depot, 240 Lynn Street in Baraboo, undergoes inspection and the Sauk County Historical Society plans its restoration. The society took ownership of the building in late October and has plans to renovate the building to be used as event space and to house historical exhibits.

A historical shot of the former Chicago & North Western Railroad depot built in Baraboo in 1902 shows the structure with its original 300 feet of canopy in 1918 before it was torn down when the building was converted to a warehouse after operations ceased in 1963. The bustling administrative building had 16 passenger trains visit daily when it was in use.