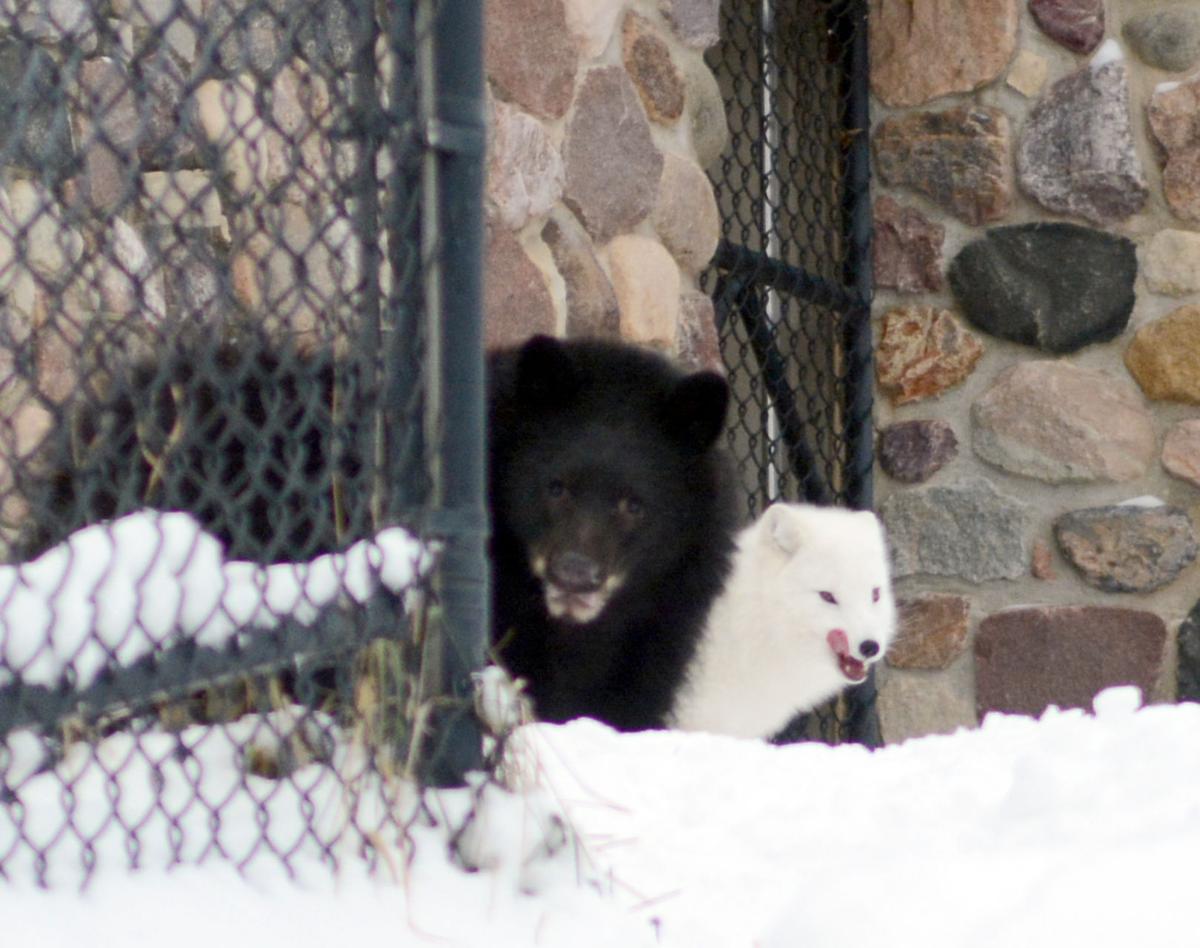 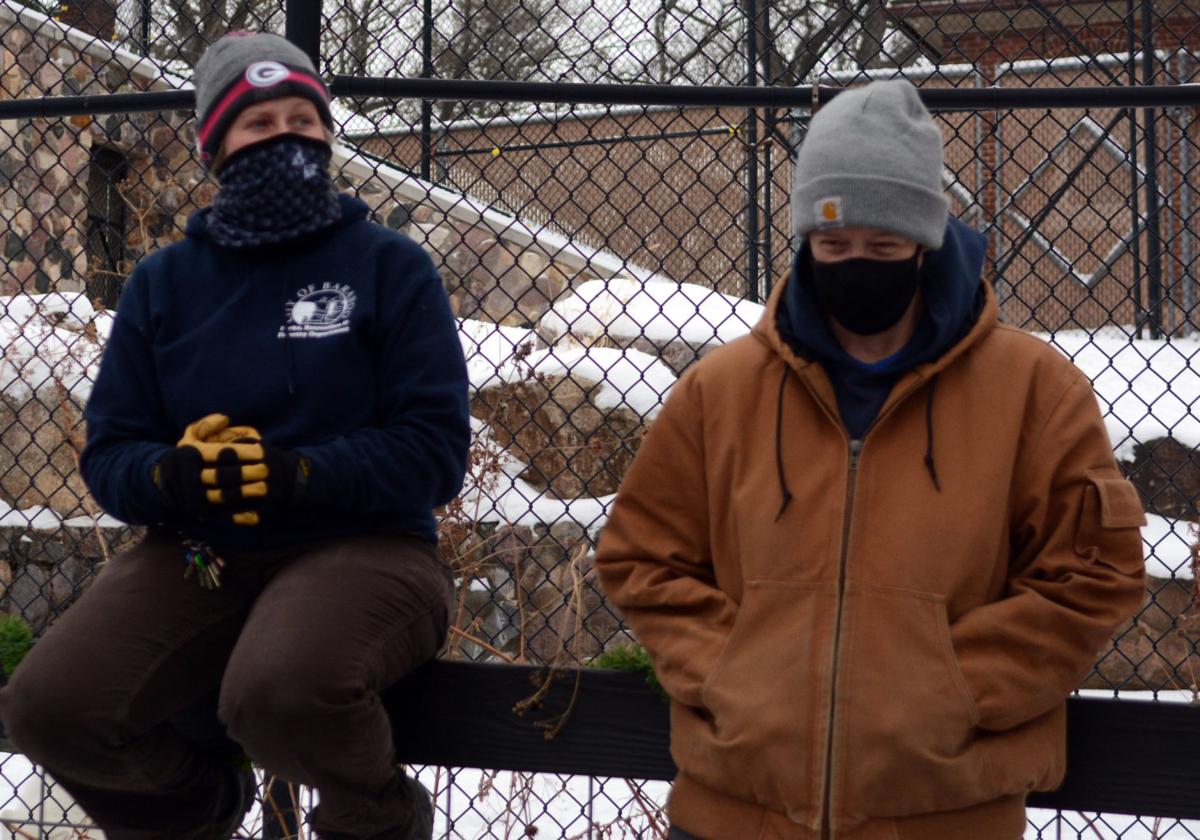 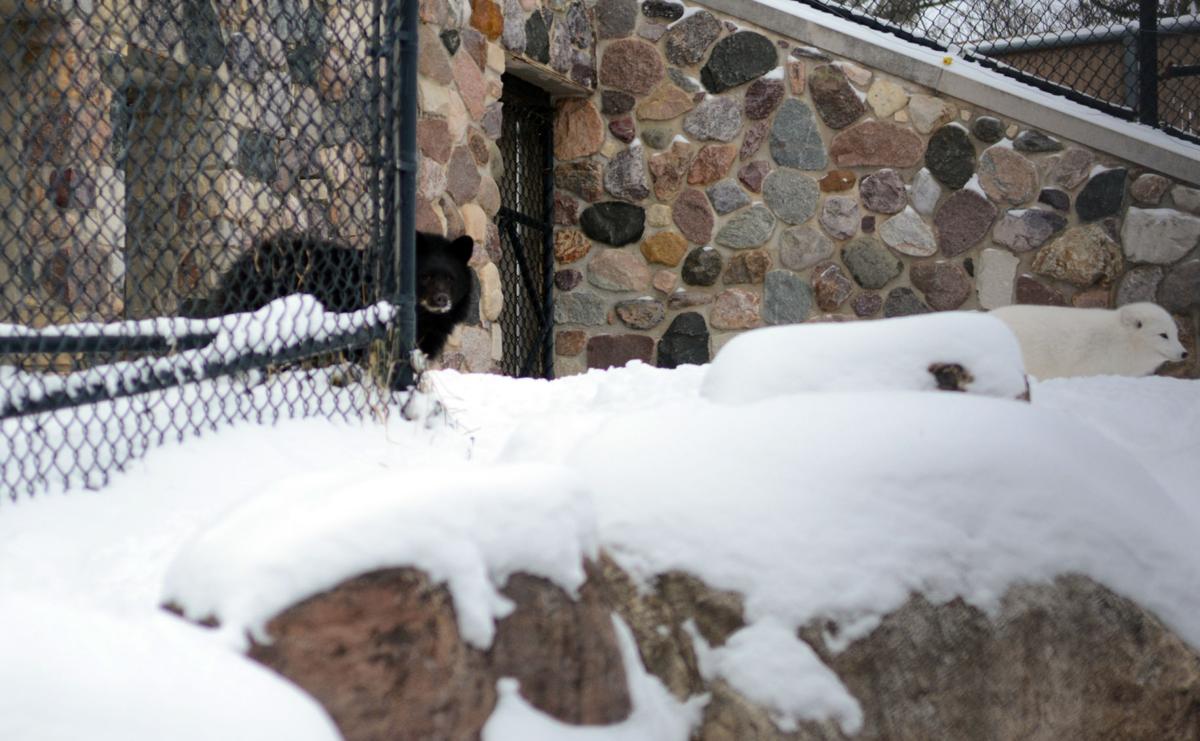 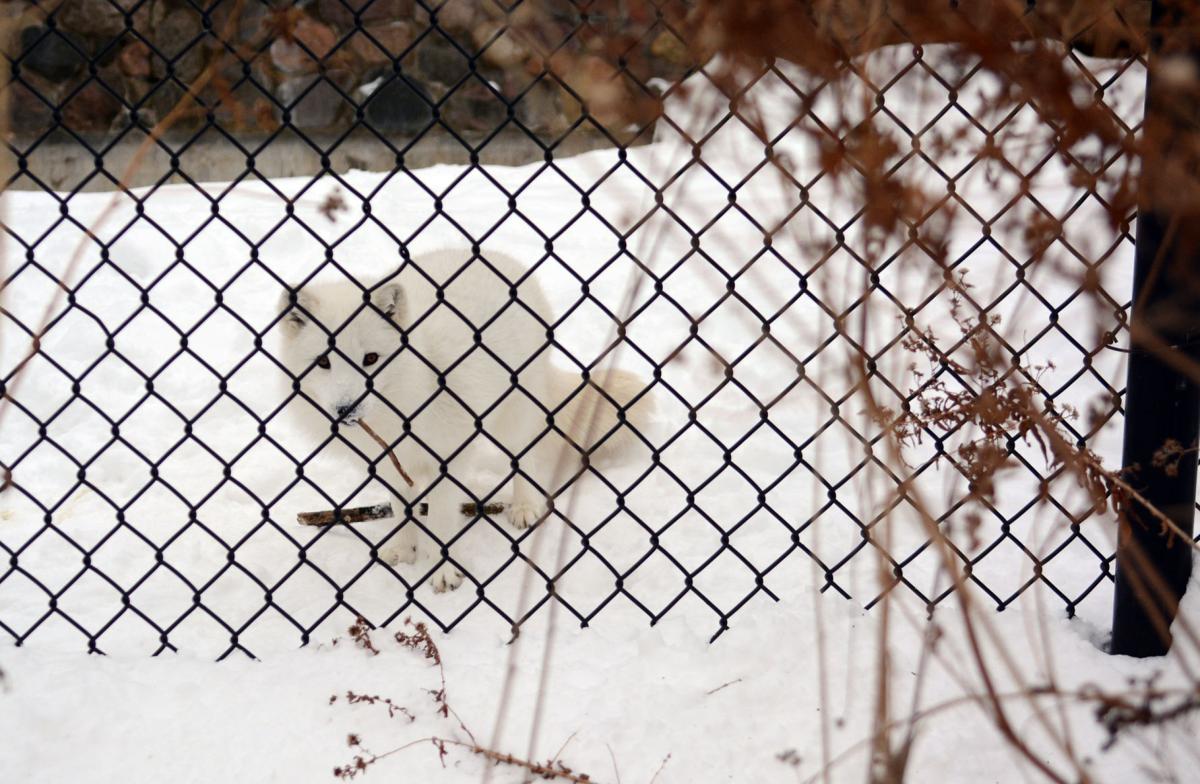 Apollo, an arctic fox, looks Thursday out of the Ochsner Park Zoo exhibit he now shares with an 11-month-old black bear cub called Miska in Baraboo.

The 11-month-old black bear cub hung to the rear of her exhibit at Baraboo’s Ochsner Park Zoo on Thursday afternoon, occasionally batting away Apollo, the young arctic fox nipping at her playfully. Zoo manager Katie Gries said Apollo is constantly trying to play with Miska and “loves to instigate.”

“Thanks to him, she’s getting more bold,” Gries said. “And yesterday I did see them wrestle a little bit, so they are good friends.”

A small group of park volunteers and the News Republic got a sneak peak of Ochsner’s new bear cub on New Year’s Eve. She will be on exhibit for public viewing during normal winter hours, 9 a.m. to 4 p.m. daily, starting Friday.

However, visitors may have a difficult time spotting her. Black bears don’t fully hibernate like grizzlies do, but Miska will still be napping much of the time from January through March, said Ellen Gallagher, zoo specialist. She’s also still adjusting to the new environment and people, the zookeepers said.

“She is a timid bear, so don’t be surprised if she is not out and about,” Gries said, noting that she’s like a toddler, getting tired out quickly after bursts of energy. “Her and Apollo get along great, and we’re hopeful that she’ll be feeling more confident come springtime, summertime, so everyone will be able to get better views of her.”

Miska, which means “little bear” in Inuit, arrived in Baraboo around late November from Ketchikan, Alaska. An official from the state’s department of fish and game said her mother and sibling were likely hit by a car, leaving Miska orphaned. Because of the timing of her mother’s death, she was unlikely to survive the winter on her own in the wild, Gallagher said.

Gries said the Ho-Chunk Nation, which sponsors the bear exhibit, paid for Miska’s travel costs. There will be a dedication this spring to thank the Nation, she added.

Though healthy, Miska had roundworms when she first arrived, a common parasite on wild animals, Gries said. The cub was kept in an indoor holding area while being treated for the worms to prevent them from infesting the exhibit.

She was also quarantined for her first 30 days here, per zoo policy, and received daily training, monitoring and health care, according to Baraboo Parks Director Mike Hardy.

Gries said she’s “adjusting very well.” At about 60 pounds now, Miska has gained roughly 20 pounds in the last month. Over the next three or four years, she will continue to grow, first getting tall and lanky and then filling out until she’s 250-300 pounds fully grown, Gries said.

Miska shouldn’t get as large as the zoo’s previous female black bear, BerryBoo, who suffered from obesity. Zookeepers have been able to start Miska off at a young age with the right diet and exercise, unlike BerryBoo, Gallagher said.

Her meals, currently an “omnivore chow,” change depending on the season in order to reflect what would be available to them in the wild. She eats some proteins, fruits and vegetables, all measured out to make sure she’s not over- or underfed, Gries added.

“It’s a vet-approved diet, so we know that we’re doing what they recommend, and hopefully we’ll get a good, healthy, strong bear,” she said.

Officials are searching for a second bear to partner with Miska, according to Hardy, who expects to find one in early 2021. He said they only accept wild animals if they can’t be released back into the wild.

In the meantime, Apollo will keep her company. The zookeepers said they’re not afraid of Miska hurting the 14-pound fox, partially because he’s much faster than she is and also because the two species would live harmoniously in the wild.

“We’re very excited to have her,” Gries said of Miska. “We hope to get her a friend as soon as we can.”

A new handicapped-accessible entrance will open Saturday at Baraboo’s Ochsner Park Zoo, which also will soon feature a new exhibit to give its…

Baraboo parks commissioners now have a way to answer lingering questions about the installation of a splash pad in the city.

Hoping to help people impacted by the coronavirus pandemic, board members of a Wisconsin Dells-based charity made the rounds Wednesday to prov…

One of Ochsner Park Zoo’s black bears was euthanized recently after his health declined significantly.

The first Juneau County baby of 2021 was born just after midnight New Year’s Day, one of the earliest New Year’s births the county has had sin…

January always feels like a long month and this year promises to be worse than most, but three Baraboo artisans want to help it feel better: T…

Apollo, an arctic fox, looks Thursday out of the Ochsner Park Zoo exhibit he now shares with an 11-month-old black bear cub called Miska in Baraboo.