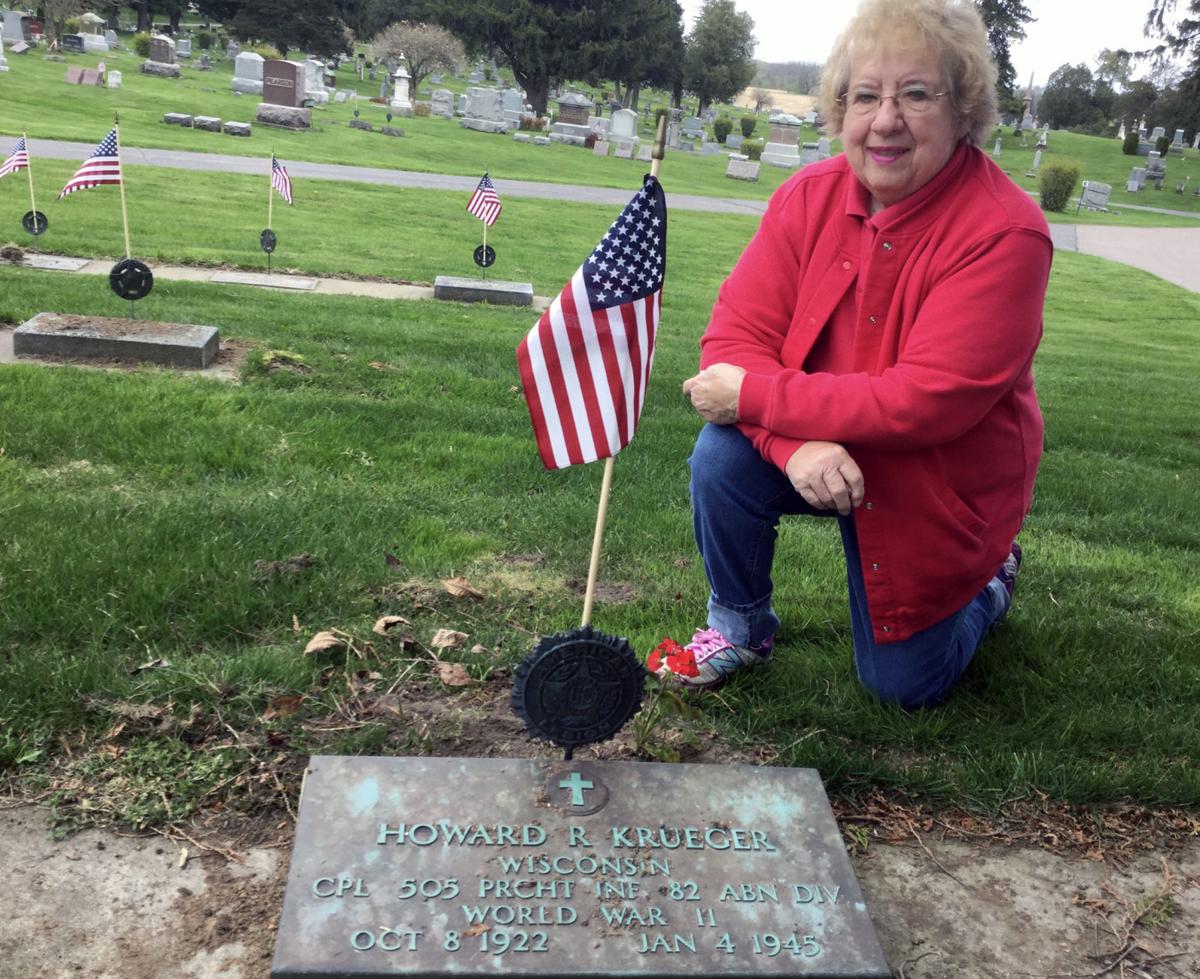 Betty Krueger on May 14  at Walnut Hill Cemetery in Baraboo talks about her memories of her Uncle Howard Krueger, who was killed Jan. 4, 1945, fighting in World War II in Europe. 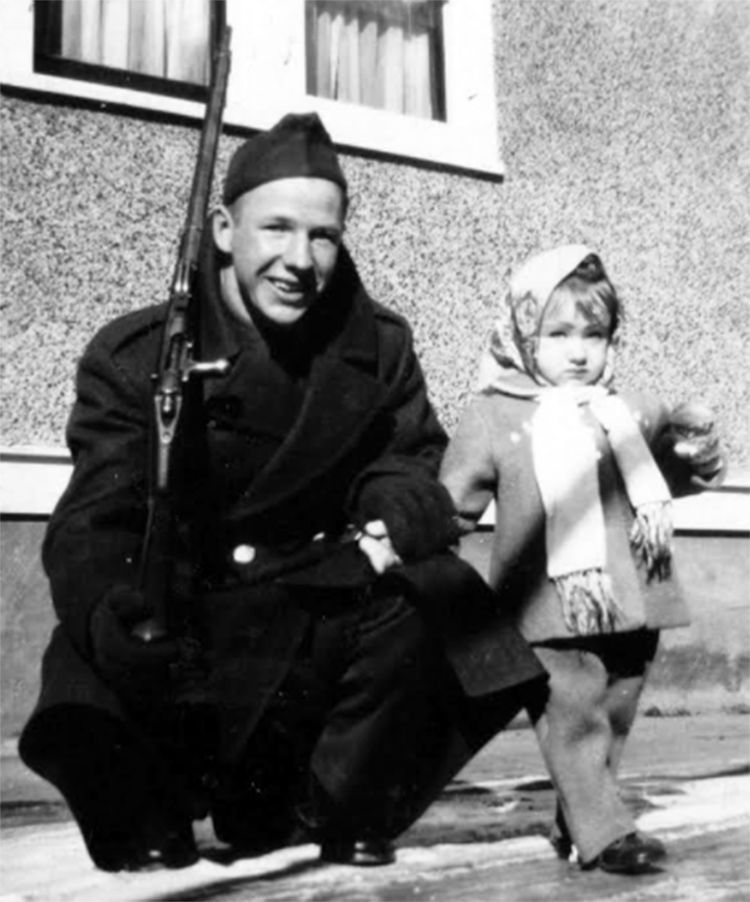 Howard Krueger is shown with his niece Betty Krueger in 1942 before he shipped out to fight as a paratrooper in Europe during World War II.

For the first time in a long time, Memorial Day services in Sauk County have been cancelled, yet another victim of this persistent pandemic. But it doesn’t mean Memorial Day should be cancelled in our hearts or in our actions. Since 1868, the fourth Monday of May has been set aside to remember the men and women who have died in America’s wars. In the shadow of this pandemic, it is important that we not forget what this day symbolizes.

Therefore, while we fly our flags, we should also take time to reflect on the lives that have been lost and dedicate ourselves anew to the virtue of public service.

One of those lives belonged to Howard Krueger, a 1940 graduate of Baraboo High School and one of 102 Sauk County residents killed in World War II.

Like so many teens of the late-1930s, Krueger knew he was living in unusual times. The Great Depression was winding down, but a far bigger firestorm was heating up. While he and his classmates were finishing their final exams in May, the German Army was slicing its way through France after rapidly crushing Holland, Norway and Belgium. Three weeks later, France also fell, an ominous portent of days soon to come. One can only imagine what young Howard and his classmates were thinking when they accepted their diplomas from Principal Gordon L. Willson: What kind of world awaits us?

When the U.S. entered the war after the Japanese attack at Pearl Harbor (Dec. 7, 1941), Howard enlisted in the Army and was sent to Fort Benning, Georgia. After basic training the ambitious young man requested assignment as a paratrooper with the 82nd Airborne Division at Fort Bragg, North Carolina.

Shortly after earning his jump wings in the summer of 1942, Howard came home to see his family before shipping out to Europe. But he wasn’t the only Krueger wearing a uniform. His twin brother, Harold, would soon see duty in the central Pacific. Another brother, Vernon, was serving in the Marines.

An adoring niece, Betty Krueger, now 80, remembers the time. “Grandma Betty,” as she is affectionately known today in Baraboo, maintains the family scrapbooks, including the letters sent home by her “Uncle Howie.”

By 1943, Howard’s life might look familiar to anyone who has seen “The Longest Day” or the HBO series “Band of Brothers.” Assigned as a squad leader in the 505th Parachute Infantry Regiment, Krueger saw action in North Africa and Italy before being patched up in England and readied for the D-Day assault into France and the eventual liberation of Western Europe.

At 0300 hours on June 6, 1944, Corporal Krueger and 18,000 other paratroopers of the 82nd and 101st Airborne Divisions boarded C-47 cargo planes and took off for Normandy. Their mission was to secure the back areas of Utah Beach and silence German guns along the coast. By the end of the day they had succeeded in that mission and also liberated Sainte-Mère-Église, the first city in occupied France to regain its freedom.

Throughout that summer the 505th pushed on. By September, with Paris liberated and Allied armies driving toward the Rhine River and the German heartland, the end seemed in sight.

But then winter came. Determined to protect the Fatherland at all costs, German generals unleashed the Ardennes Offensive in Belgium on Dec. 19, and both the 82nd and the 101st were thrown into critical areas in the vicinity of St. Vith and Bastogne.

Krueger and his band of brothers were in the fight of their lives. Day after day, in frigid and unremitting combat hell, the men held their ground. They were outmanned 5-1 and lousy weather meant there would be no reinforcements of fresh troops.

Krueger’s squad hung on through Christmas Day. Then on Jan. 4, while clinging to the earth during an artillery attack, Krueger was killed by shrapnel.

Today, a large, polished stone in Arbrefontaine, Belgium, marks the spot where Krueger and other members of his platoon were killed, a painful reminder of the price our country has paid to protect human freedom.

This Memorial Day, though public celebrations are on hold, let us fly our flags proudly but also strive to lead lives that honor servicemen and women like Howard Krueger.

Steve Argo teaches U.S. History, AP Government, and Comparative Politics at Baraboo High School. He is an Army veteran and a member of the American Legion, Post 26. From 2014-2018 he led the National Tuscania Remembrance project. He can be reached at swargo@barabooschools.net.

Dr. James Stein: How to manage COVID-19 risk as you leave your cocoon

Many people are experiencing intense but expected anxiety as they prepare to leave the shelter of their homes during the COVID-19 pandemic. As a cardiologist in Madison, here is my perspective on managing risk:

POLMAN COLUMN: Trump preparing to yell 'fraud!' if he loses in November

The Trump-fueled pandemic has already claimed 94,000 American lives. And six months from now, the pandemic-fueled election may well wreak havo…

Sumwalt: Rally round the flag and the mask

Like displaying the flag, wearing a mask these days is a symbol of love of country and love of neighbor. This is especially true in small town…

FLOWERS COLUMN: Why we're 'not all in this together'

So many of us are parked in front of our television sets these days, more out of necessity than desire.

LAUNDRIE: Finding treasures in the attic

My husband and I drag out the yellowed boxes peppered with dead Japanese beetles from the far corner of the attic. We’d put off this dirty cho…

Well the time has finally come. The time so many like me were hoping for. We waited patiently, enduring a time of hardship, frustration, and u…

Betty Krueger on May 14  at Walnut Hill Cemetery in Baraboo talks about her memories of her Uncle Howard Krueger, who was killed Jan. 4, 1945, fighting in World War II in Europe.

Howard Krueger is shown with his niece Betty Krueger in 1942 before he shipped out to fight as a paratrooper in Europe during World War II. 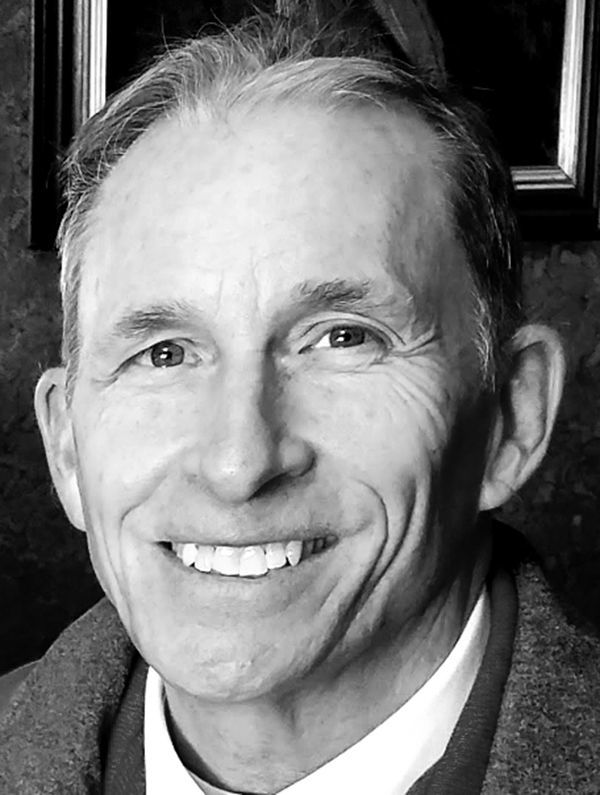