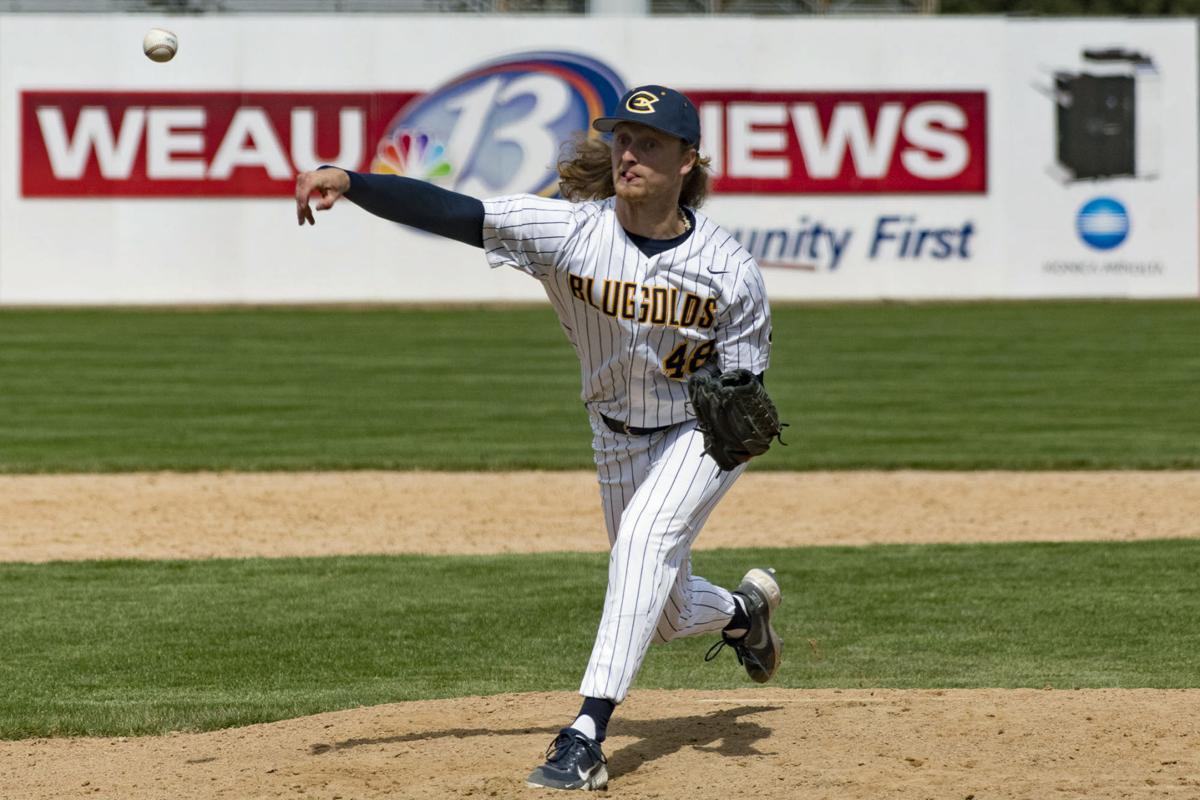 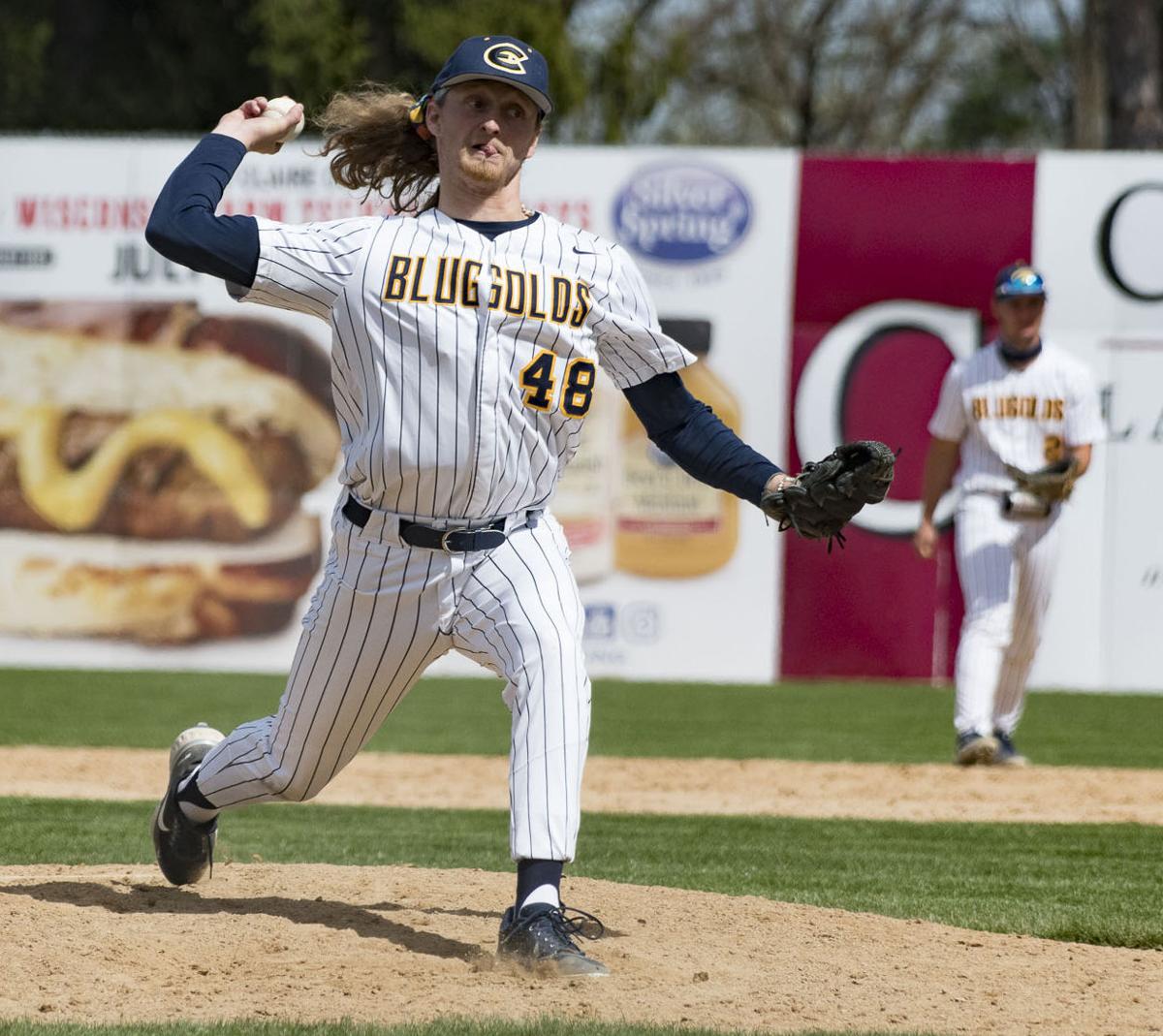 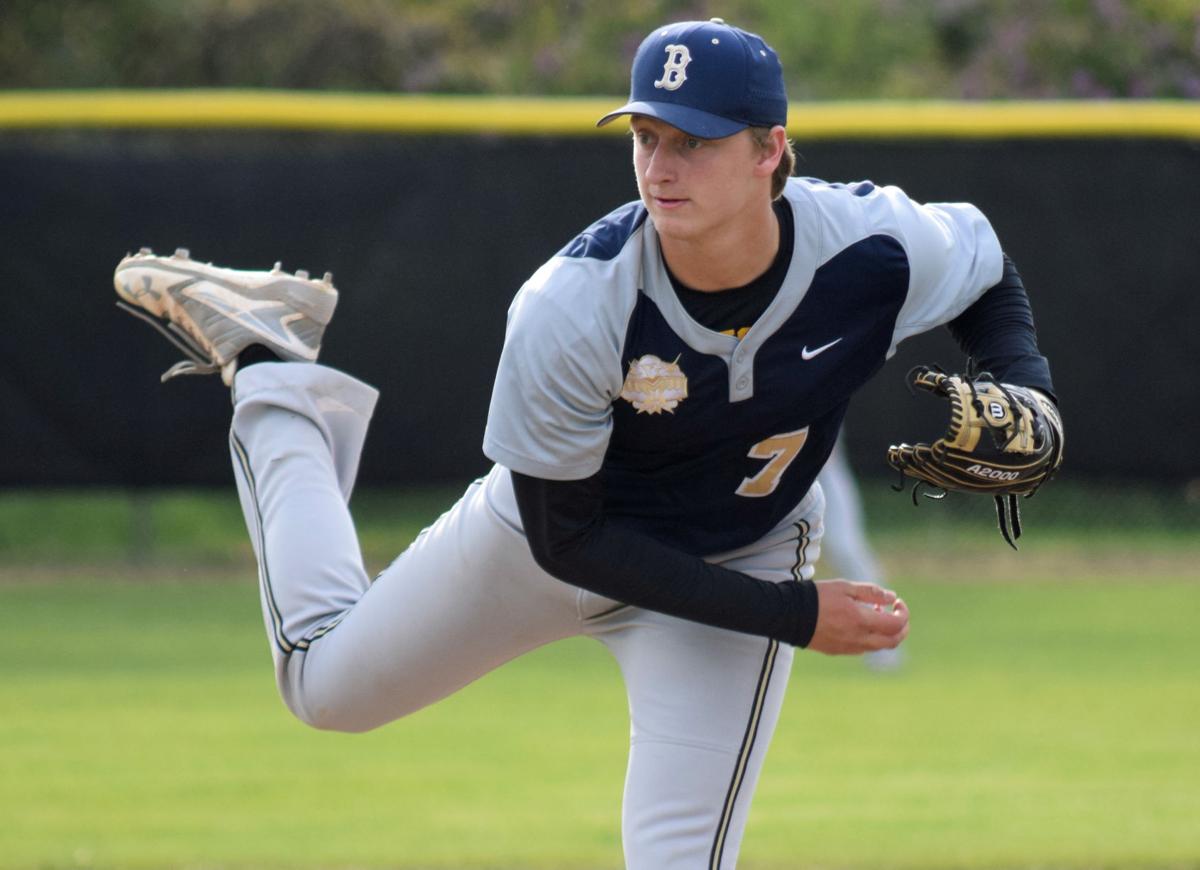 Tom Ginther follows through on a pitch during his senior season at Baraboo High School in 2017.

He went back five months later to pick up the rest of his stuff and bring it to a stage of his life he didn’t see coming. Ginther, a 2017 graduate of Baraboo High School, is enjoying it, spending his fourth year of college helping the University of Wisconsin-Eau Claire baseball program get off the ground.

“They call me ‘grandpa’ over here,” Ginther said April 26 of his role on a young team with 14 freshmen on the roster. “It’s been fun to help them through their first year of college.

“I thought it was going to be a blast — and it has been. Literally starting from nothing ... 10 months ago this team wasn’t even put together.”

Ginther’s doing much of his work on the mound, serving as Eau Claire’s ace and picking up the program’s first win in 26 years with a complete-game shutout in an April 16 win over Finlandia.

But the Rock Springs native’s role goes deeper. When he’s not pitching, the North Dakota State transfer is in the dugout sharing his experience with a group of players tasked with building the Eau Claire baseball program, which returned to NCAA Division III this year after disbanding in 1995.

“Tom has been an outstanding presence with his work ethic and vocal support of not only the pitchers, but position players as well,” Eau Claire head coach Charles Bolden said.

“Mentally, they look for some mental cues that I use,” Ginther said. “Things that I told myself to get through the hard times. ... The biggest thing is the mental aspect, because high school and college are just not even the same ballgame.”

Ginther learned that during his stint at North Dakota State, where he saw limited action in three years — a difficult transition for someone accustomed to a leading role. Therefore, when Eau Claire set out to put a roster together, a Wisconsin kid playing Division I ball was looking for another opportunity.

Ginther went from being a four-year starter at Baraboo to sitting at North Dakota State. He redshirted in 2018, threw 2/3 scoreless innings in 2019 and didn’t appear in the Bison’s COVID-19-shortened 2020 season.

“It was a culture shock,” he said of the transition to college. “First of all, I was just disappointed in myself. Because when I committed to NDSU and when I got to campus, it was my goal to be one of the top dogs on the team. It just didn’t turn out that way, which I still have some dreams about it, it still haunts me, but it didn’t work out that way so I’m where I am now and I’m enjoying it.”

His path to Eau Claire began with a scene similar to one that played out throughout the United States last March.

The Bison were scheduled to play their first Summer League game on a Saturday in early March, but NDSU coach Tod Brown called the team in for a mid-week meeting.

“We were like, ‘No way is our season going to get canceled,’” Ginther said, noting that the players were aware of COVID-19 shutting down major events like the NCAA men’s basketball conference tournaments. “I mean, we had no idea about the coronavirus, really even what it was, last March. So coach told us, ‘You guys can feel free to go home, we won’t practice this week, take a long weekend and plan on being back Monday.’

“I thought I was going to be back in five days. I get a call from one of my roommates when I’m passing Minneapolis, and they’re like, ‘Dude, our season’s done.’ It was one of the weirdest things that’s ever happened in my life. I didn’t know what that meant for the rest of the year, I didn’t know if we were going to still practice to still keep the team put together. But no, that was the last time I saw Fargo until like August.”

A lot happened in that five-month gap in which the country was mostly shut down. The COVID-19 pandemic threw off numbers across college athletics, and gave Ginther time to think about how we wanted to finish out his career.

Ginther — who still has best friends on the Bison — said the decision to transfer was because of COVID. Players were granted a year of eligibility which meant last year’s senior chose to come back instead of graduating, coupled with 5-10 freshmen joining this season.

Ginther felt “there just wasn’t enough room on the roster and I wasn’t going to play as much as I would have liked.”

“So I entered the transfer portal and kind of took a week or so thinking about what my goal was going forward — if I wanted to find a place to finish out my career and play a lot, or if I wanted to make a transition to another D-I,” he said.

Ginther turned to NDSU pitching coach Tyler Oakes, who came back with an interesting opportunity.

“I had no idea they were starting a program. I didn’t even know that they didn’t have a team,” Ginther said of how he found out Eau Claire needed players.

Oakes told Ginther he’d help him find schools if Ginther told him what he’s interested in. What enticed Ginther was playing closer to home, and “he got back to me right away and told me Eau Claire was starting a program this next year.”

“Ultimately, I decided on Eau Claire for a few reasons,” Ginther said. “The biggest reason I wanted to go to Eau Claire is — first or all, it’s a really cool school and city — but the fact that they were starting the program from scratch was a pretty sweet idea to me.

“I just shot Charles an email and pretty much the rest is history.”

A brand new team is nothing new to Ginther, who was an inaugural member of the Freemont Moo when they joined the Expedition League in 2019. That experience in summer ball made Ginther’s decision to join Eau Claire an easy one.

“The experience I had starting the summer ball program was awesome,” Ginther said. “It was probably one of my favorite baseball experiences of my life. So the idea of doing it for a school just sounded even better.”

Ginther is drawing on those experiences as he helps Eau Claire, which is 4-22 entering Saturday’s doubleheader at Stevens Point, navigate its growing pains.

“My favorite part of being on the team and the position I’m in isn’t so much what I can help with on the field,” Ginther said, noting that seven of Eau Claire’s nine starters are typically freshmen. “It’s a rewarding feeling being able to help them through the bumpy road of transitioning from high school to college. Because I know I sure had a hard time once I got to NDSU.

“A lot of guys’ heads start to spin a little bit once they’re in the game, which is completely normal. It goes away with experience, but when you’re a freshman thrown into the fire, which not a lot of guys are at other programs, I can just see how it’s tough on them. So I like to kind of calm them down, pick their brains, see what they’re thinking.

“They’ll say, ‘yeah, I’m nervous, this is why.’ So I kind of give them insight based on my experience of what helped me get over that. So when I’m not pitching, I’m usually right there with the pitchers between innings before they go out, making sure their heads are in a good spot.”

Ginther’s no coach, however. The 6-foot-3 pitcher can still bring it, although he’s a completely different pitcher than he was in high school, or even at NDSU.

Ginther’s self-described high school scouting report was that he “tried to bring the heat” and threw a good curveball. Now, he’s grown into the mental side of pitching — adding a couple more pitches and realizing “it’s not all about velocity, especially at this level.”

“Strikeouts aren’t the coolest stat anymore, it’s more about working deep into games and getting guys out early in the count,” Ginther said.

He’s still putting people away, striking out 9.78 batters per nine innings through seven starts while compiling a 5.53 ERA and a 1-5 record.

“I wouldn’t call myself a junkballer at all,” he said. “I still try to throw the ball hard. I didn’t lose that mentality, but it is fun trying to mix in different looks, different pitches and keep guys off balance. Back in high school, the only way I was happy was if I got strike three on a guy. But now if I get a guy to roll over on the first pitch, it’s just as good of a feeling.”

Ginther’s mindset isn’t the only thing he’s changed. After dropping his arm angle down while in Fargo, Ginther is back to throwing over the top this spring.

“My last two full years at NDSU, I dropped down from throwing over the top to throwing submarine, kind of sidearm,” Ginther said. “So this summer it was kind of like relearning to ride a bike. It was super weird. Something that was second nature my whole life ... it felt like I was throwing with my left hand.

“But it came back after a while ... it’s kind of a natural process.”

Ginther was firing on all cylinders when he beat Finlandia in mid-April. That 2-0 victory ended Eau Claire’s 14-game losing streak and sparked a four-game winning streak that came at the right time.

The mental side of the game has been especially crucial during a season in which the Bluegolds knew they were going to take some lumps.

“It was expected going into the season based on depth and experience, so we’re trying not to beat ourselves up,” Ginther said. “There’s a learning lesson inside of every game, we’ve just got to find it — whether it’s a 10-run rule or we lose by one in the 10th inning.

“When you’re starting a program, it’s what steps can we take that are going to help us win games in the future?”

Ginther believes that attitude has been aided by the fact that every member of the Blugolds came in buying the same vision for the program.

“The goal isn’t to hang with people, the goal is to be at the top of the conference,” Ginther said of the growth process. “Everyone understands that’s not going to happen this year; we knew that going in, but no one’s slacking and no one’s giving up on the next couple years. ... We want to see the Eau Claire Blugolds at the top of the conference — kind of like a Whitewater or a La Crosse — each and every year.”

Baraboo's Tom Ginther continued to rack up postseason honors when he was named to the Wisconsin Baseball Coaches Association’s 2017 All-State Team.

Tom Ginther follows through on a pitch during his senior season at Baraboo High School in 2017.