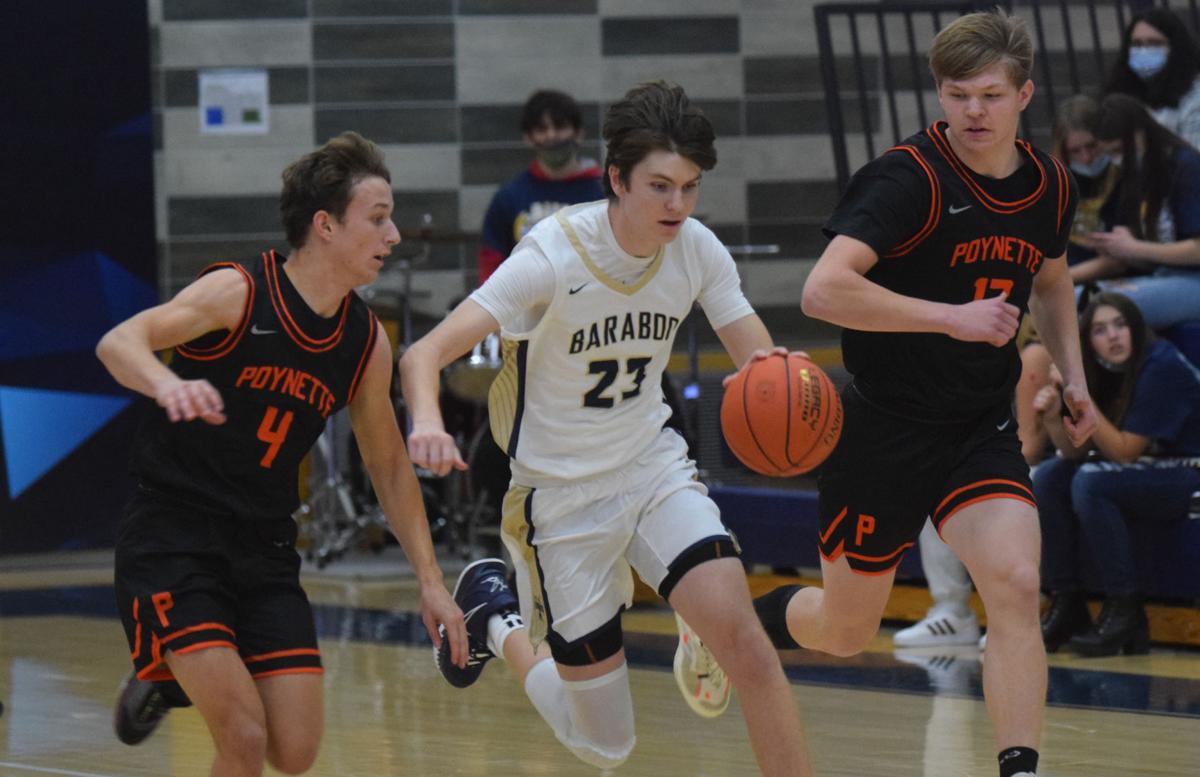 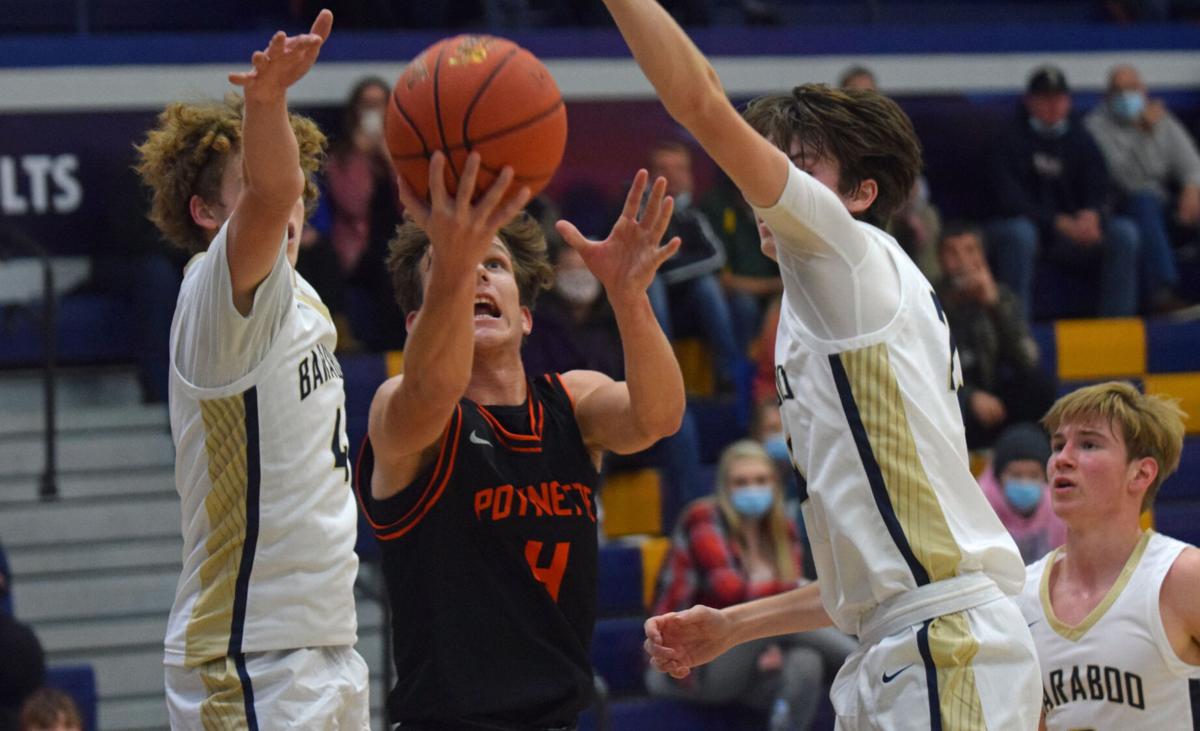 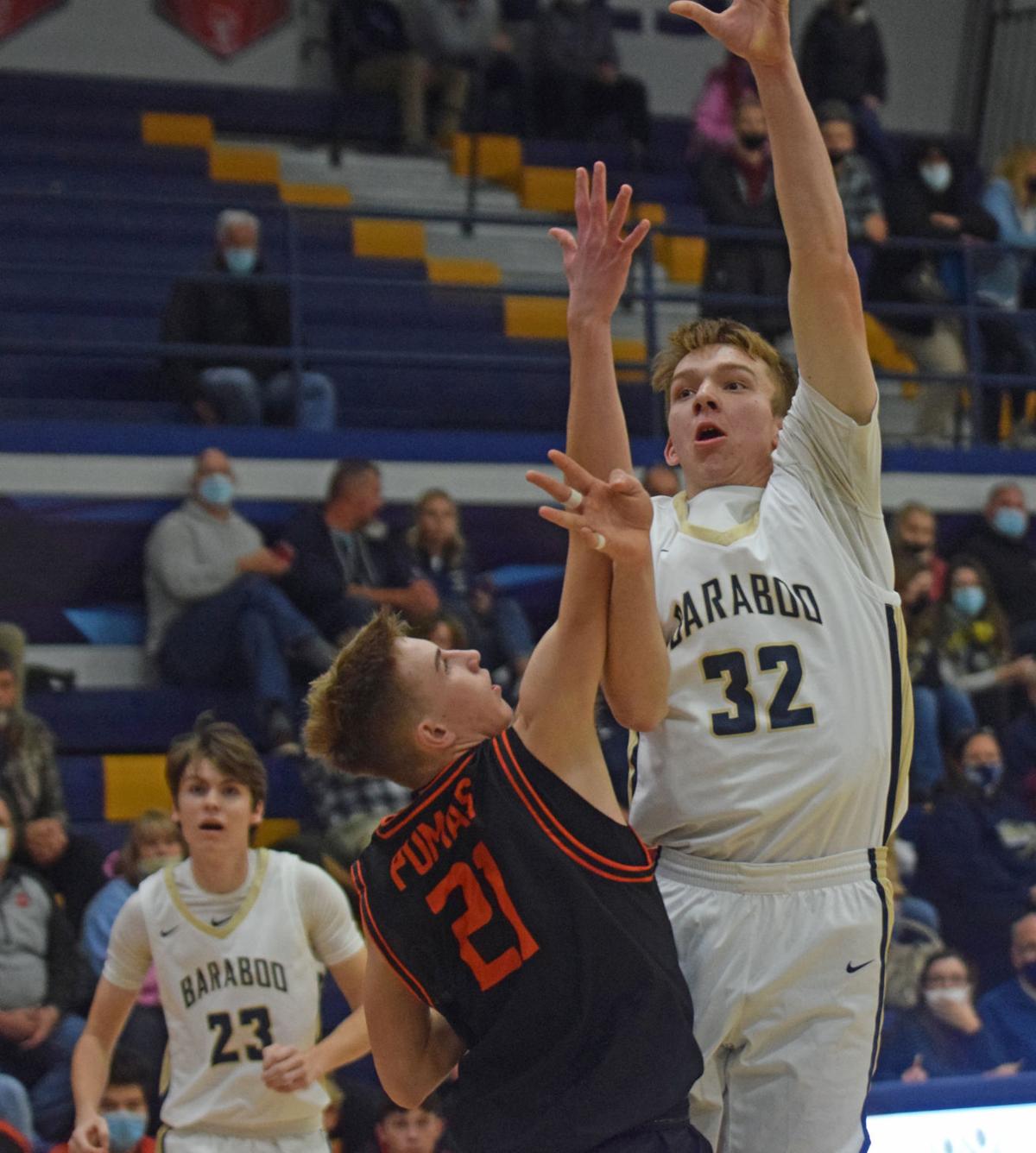 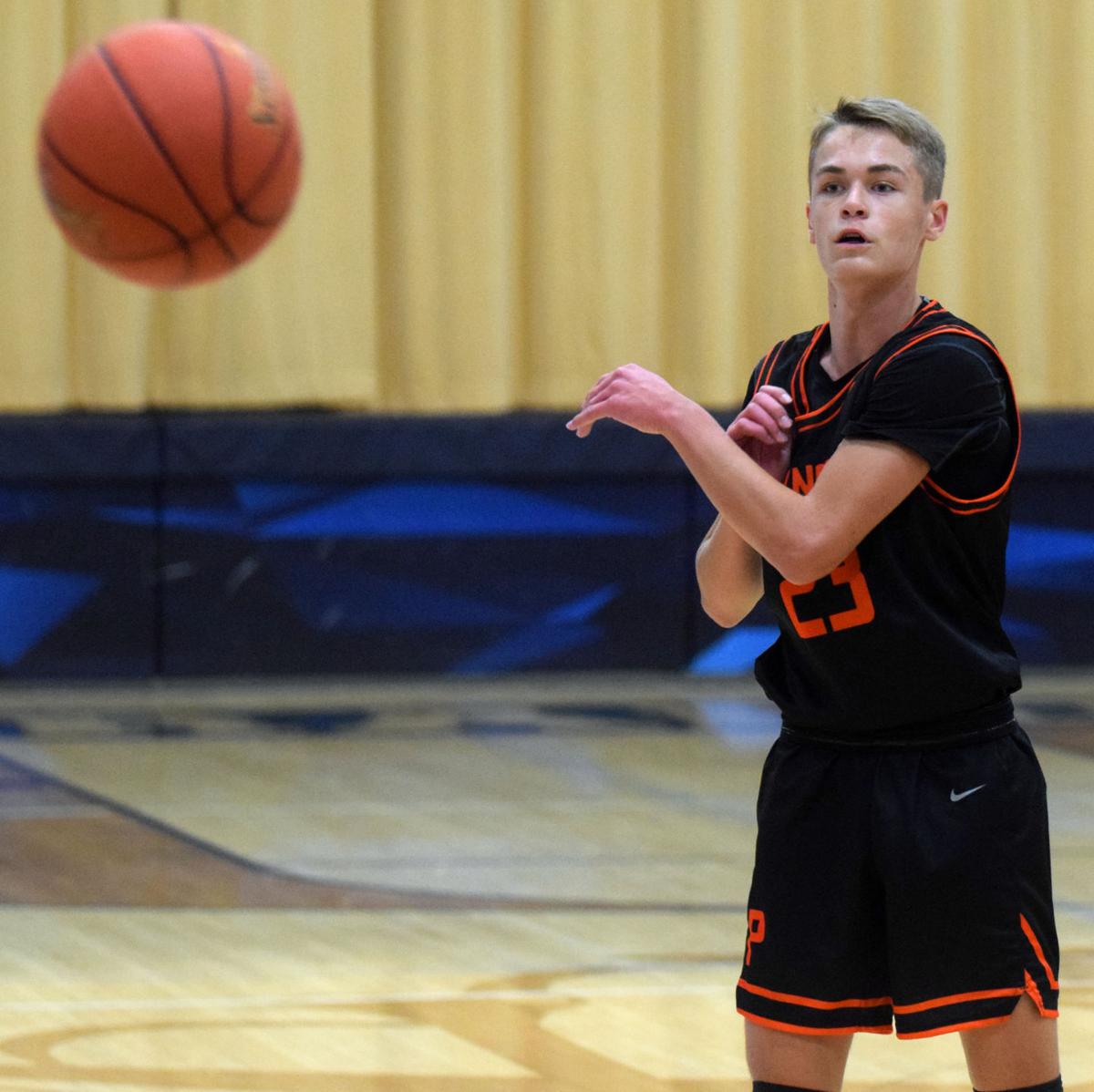 Poynette sophomore Brett Hackbart fires a pass to the corner during a non-conference, season opener aganst Baraboo on Tuesday at Baraboo High School.

Tyler Fish was confident the early varsity experience some of his younger players on the Baraboo prep boys basketball gained last season could be put to good use this winter.

The third-year head coach might not have thought as early as the Thunderbirds’ season opener however, but that’s exactly what happened Tuesday night.

Sophomore Luke Vittengl scored a team-high 16 points and junior Drew Mistele delivered the game-winning three-point play with 2.1 seconds left to play to lift the T-Birds to a 68-67 win over Poynette in a non-conference game at Baraboo High School. Vittengl was one of three scorers in double-figures for Baraboo, which started the season with a win for the first time since Nov. 22, 2013.

“We kind of mentioned that date and said ‘Let’s change the tone of this,’ and it just kind of felt all game it was going to be down to the wire like that,” Fish said. “It was a pretty happy locker room and the kids have been working tremendously hard.”

That hard work was nearly for naught though.

The Pumas trailed by as many as eight with just over seven minutes to play, but responded with a 15-2 run over that span to take a 65-60 lead with just 22 seconds remaining after two free throws by junior Aiden Klosky.

Baraboo stayed the course however, and traded a Vittengl layup and a 3-pointer with 12 seconds left for split pair of Poynette free throws to claw within 66-65. The Pumas had a chance to push the lead back to three points, but senior Brock Chadwick split a pair of free throws with nine seconds to go to keep the lead at 67-65.

The T-Birds snared the rebound off the missed second shot, got the ball to Mistele and the point guard did the rest, driving down the right side of the court before finishing a left-handed layup through contact to tie the game 67 with 2.1 seconds remaining. The 5-foot-10 guard then buried the free throw before Baraboo forced a tough half-court heave to close things out.

“Last year I don’t know if (Drew) Mistele has the IQ to take it in there; that’s a year of varsity experience right there,” Fish said.

“We just talked in timeouts that when we rebound, let’s push and get easy looks, and that 3 from Luke was huge,” he added of the sequence leading up to the game-winning bucket.

Despite seeing a win snatched away, Poynette coach Cody Odegaard was pleased with his young team’s fight, especially in the waning minutes of the second half. The Pumas led 28-25 with 3:30 remaining in the first half on a straight-on 3-pointer by sophomore Brett Hackbart, but went into the break trailing 38-33 after a Baraboo 13-5 run to end the first half.

Poynette didn’t lead again until after erasing that eight point deficit and taking a 62-60 lead on a 3-pointer by Klosky, who scored a game-high 21 points, with 2:55 left to play.

“As a young team, when you can get that fight and that little bit of a comeback, or make a run of your own, instead of just putting your head down and letting them continue their lead is huge for us,” Odegaard said.

“We’ve got the right pieces and the right guys to perform and do stuff correctly,” he said.

Along with Klosky, Hackbart scored 16 points for the Pumas, while senior Lucas Pickarts added a dozen. Seniors Brady Kelly and Gabe McReynolds had 12 and 11 points, respectively, for the T-Birds, while junior Derek Gehin tacked on nine.

Both coaches noted free throw struggles as major areas of improvement — Poynette was just 16-of-30 while Baraboo finished 9-of-23 from the charity stripe.

“If we make our free throws we’re not in that situation, and just rebounding, too,” Odegaard said. “Those couple free throws make a huge difference.”

There were still positives though, namely a lively home crowd. After having mostly sparse attendance last season, there was a palpable buzz in the Baraboo High School gymnasium Tuesday night, one that Fish was very happy about.

The Thunderbirds played a number of inexperienced players last season and coach Tyler Fish believes it can only benefit this year's squad.

The Thunderbirds and Warriors are coming off of losing campaigns last winter, but both have put in plenty of work this offseason.

The Thunderbirds faded away after the break and struggled from the line, converting just 17 of 37 free throw attempts.

Poynette sophomore Brett Hackbart fires a pass to the corner during a non-conference, season opener aganst Baraboo on Tuesday at Baraboo High School.