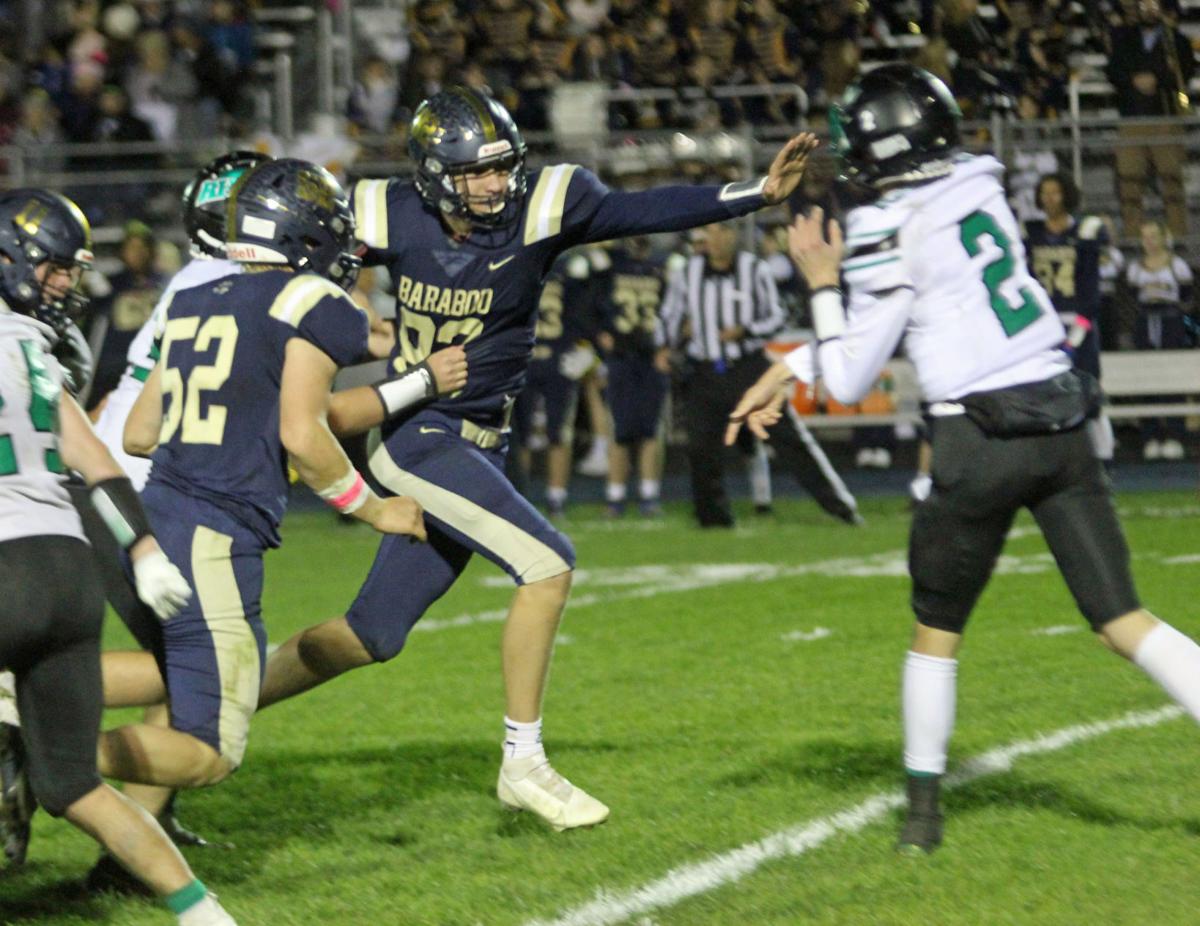 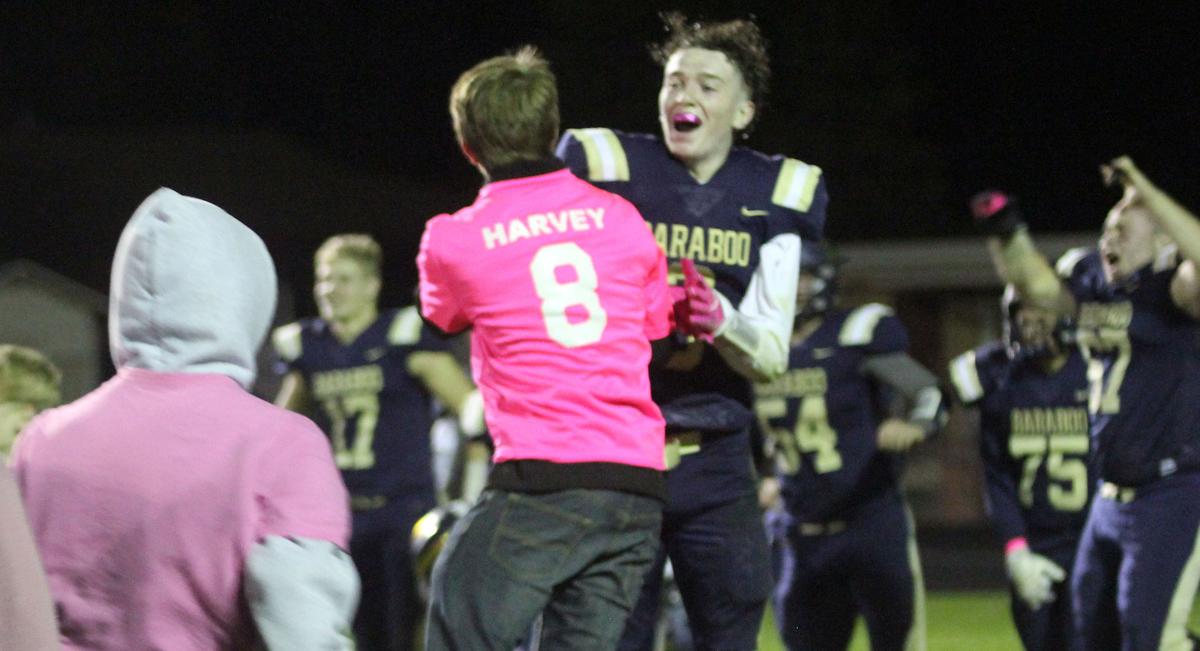 Baraboo's Caden Agnew celebrates after the Thunderbirds hung on for a 13-7 win over Rhinelander in Friday's WIAA Division 3 Level 1 playoff game in Baraboo. 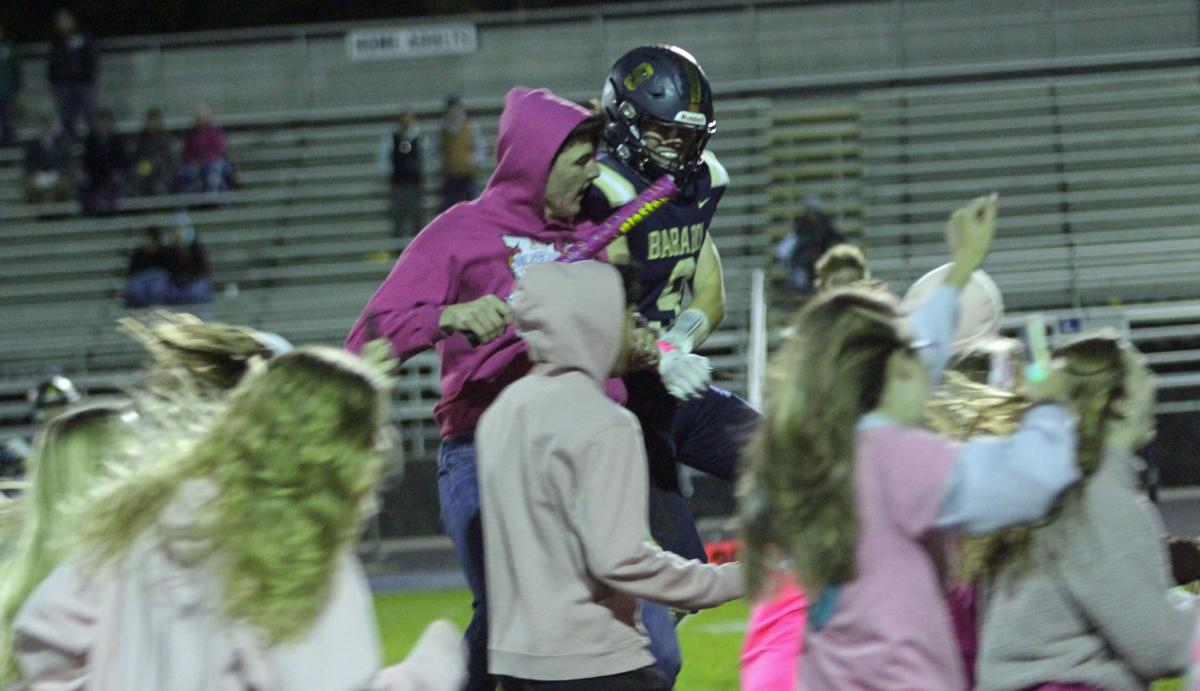 The Baraboo defense was seemingly on its heels.

At least most units would be after giving up a first down on a fake-punt jump pass in the closing minutes. But the fourth-seeded Thunderbirds played through it, stiffened on the 9-yard line and celebrated with their classmates on Flambeau Field after holding on for a 13-7 win over No. 5 Rhinelander in a WIAA Division 3 Level 1 playoff game in Baraboo.

“We stiffened on defense and we stopped them,” Baraboo head coach Steve Turkington said minutes after Rhinelander’s final pass landed harmlessly in the end zone. “And they’re a really good football team.

“We just happened to make a couple more plays than they did.”

They needed every play they could get. After taking a 13-7 lead early in the third quarter, the T-Birds (8-2) leaned on their defense. They nearly broke on Rhinelander’s final drive of the night.

The Hodags (8-2), who scored 34.4 points per game during the regular season, started at their 26-yard line with 7:21 remaining. Cayden Neri broke loose for a 29-yard run, but the drive stalled and they quickly faced fourth-and-7 from midfield. They lined up to punt and snapped it to the upback, Caleb Olcikas, who ran toward the line of scrimmage before throwing a jump pass to Jacksen Smith to set Rhinelander up with a first down from the Baraboo 38-yard line with 4:30 remaining.

Smith, a senior quarterback, took the next play 13 yards to the 25, but the Hodags stalled again and needed some more fourth-down magic. They got it again, with Smith rolling right and completing a 20-yard fourth-and-12 pass to Arik Beske to the 12-yard line with 2 minutes remaining.

But the T-Birds’ defense, which hadn’t held an opponent to single digits since claiming a 17-0 win at Stoughton on Sept. 10, had one more stop in them. After Neri was stopped for a loss on second down, he picked up two yards on third and Rhinelander faced a fourth-and-8 from the 9-yard line.

Smith fumbled the shotgun snap and rolled right, but his pass fell incomplete and the T-Birds took over at their own 9-yard line with 50 seconds remaining. They kneeled out the clock and celebrated the fourth playoff win in program history, including the second in two years.

“Our defensive game plan pretty much stayed the same the whole game,” Turkington said. “They had the fake punt, they had a 15-yard facemask penalty to keep a drive alive. There were a couple balls on the ground we didn’t recover that we should have. And they had one drive where they had the toss to the outside and got a big play. They capitalized on that. But, the rest of the game, I felt like we held them.”

Both defenses held early on, as the first three drives of the night ended with three-and-outs. Baraboo got moving on its second possession, marching 62 yards in 4 minutes, 2 seconds.

The momentum shifter came on third-and-8 from the Baraboo 41-yard line. Luna Larson dropped back and found Caden Agnew on the right sideline for a leaping 24-yard catch that put the T-Birds in business. Larson quickly broke right for a 20-yard run to the 3-yard line before Riley Weyh plunged in the end zone to open the scoring. Brady Henry tacked on the extra point to give the T-Birds a 7-0 lead with 2:13 to play in the first quarter.

That quartet was huge all night in a game that saw Larson and running back Kane Mahoney, who combined for nearly 3,000 yards during the regular season, hobbled by injuries.

The T-Birds were forced to shift away from their punishing ground game, getting the ball out of Larson’s hands quickly and into the mitts of Agnew and Henry. The senior receivers stepped up, coming through with a number of huge catches as Agnew caught seven passes for 106 yards and Henry finished with three catches for 61 yards.

“We’ve been working on it all season and that was a big piece of our game plan,” Turkington said of Baraboo’s quick passing game, which saw Larson complete 11 of 16 passes for 173 yards while also running for 96 yards on 18 carries. “We’ve been working on getting outside, and that’s what they were doing against us, because there was no room inside for either team.”

Rhinelander also had a hard time finding consistent yards with their normally dominant rushing attack. Neri, who entered the night with 1,689 yards and 20 touchdowns rushing according to WisSports, kept plugging away, however, to finish with 30 carries for 132 yards. He broke a big one immediately after Weyh’s touchdown, taking it 49 yards down the right sideline to set Rhinelander up at the Baraboo 16.

Olcikas eventually ran it in from 3 yards out, Neri made the extra point and the Hodags tied the game at 7 with 11:32 to play in the half.

Neither offense broke a big enough play the rest of the half, and Baraboo took a 13-7 lead into the locker room.

“We just didn’t execute really well on offense as far as blocking,” Turkington said. “And hats off to Rhinelander, they filled really quick on run defense. So they caused some problems, too. It was kind of the same type of deal that they were dealing with with our defense. It’s hard to run the ball in a playoff game like this.”The T-Birds received the second-half kickoff and embarked on the final scoring drive of the night. They got a little help from a facemask penalty that turned a turnover on downs into a first-and-10 from the Rhinelander 37-yard line with 9:57 to go in the third quarter. On the next play, Larson found Agnew for a 25-yard completion to the 23-yard line.

Two plays later, Larson lofted a pass to the right side of the end zone. The ball appeared to deflect off a Rhinelander defender and into the hands of Henry, who hauled in the 20-yard touchdown pass to give Baraboo a 13-7 lead.

Then the defense held on and earned the right to visit top-seeded Mosinee (10-1) on Oct. 29. The Indians rolled to a 43-8 win over No. 8 Hayward/Lac Courte Oreilles on Friday.

Mosinee has been here plenty of times before, winning state titles in 1980 and 1981 and making the playoffs in 19 of the past 20 years. While Baraboo won a playoff game and boasts 20 seniors on the roster, the program is a little less familiar with Level 2 of the playoffs, as the T-Birds have never played at state and are in the postseason for the 10th time ever.

Their one common opponent this season showed a similar result, as Mosinee claimed a 14-7 home win over Rhinelander on Oct. 1.

“They played in a game just like this,” said Turkington, who watched film of the game while preparing for the Hodags. “There was one offensive touchdown scored in that game, and one was a pick six and one was a punt block. So it’ll be a battle.

“We’ll watch film as a staff over the weekend, on Monday the team will watch film, and then we’ll get to work.”

Players and volunteers get ready for Arab Cup

The senior Division I recruit piled up 155 rushing yards and three touchdowns as the Thunderbirds finished off the regular season with a big rivalry win.

Baraboo's Caden Agnew celebrates after the Thunderbirds hung on for a 13-7 win over Rhinelander in Friday's WIAA Division 3 Level 1 playoff game in Baraboo.