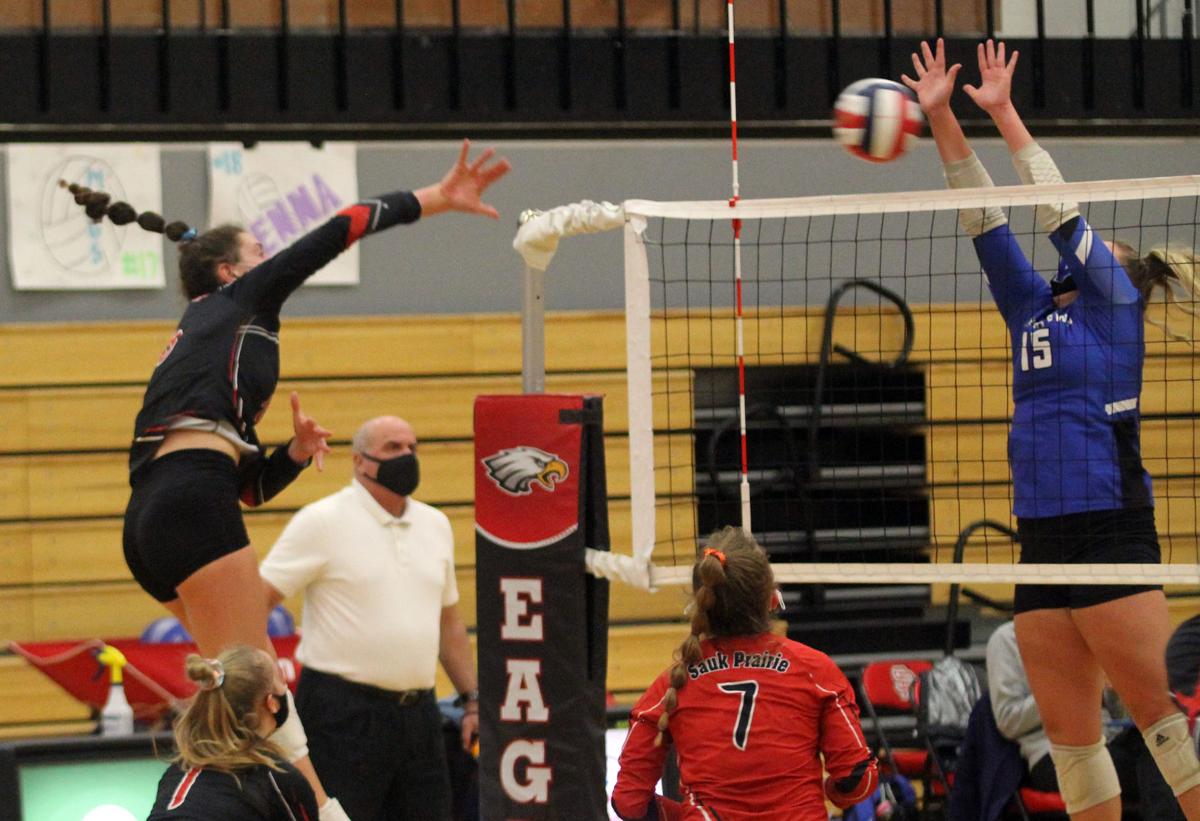 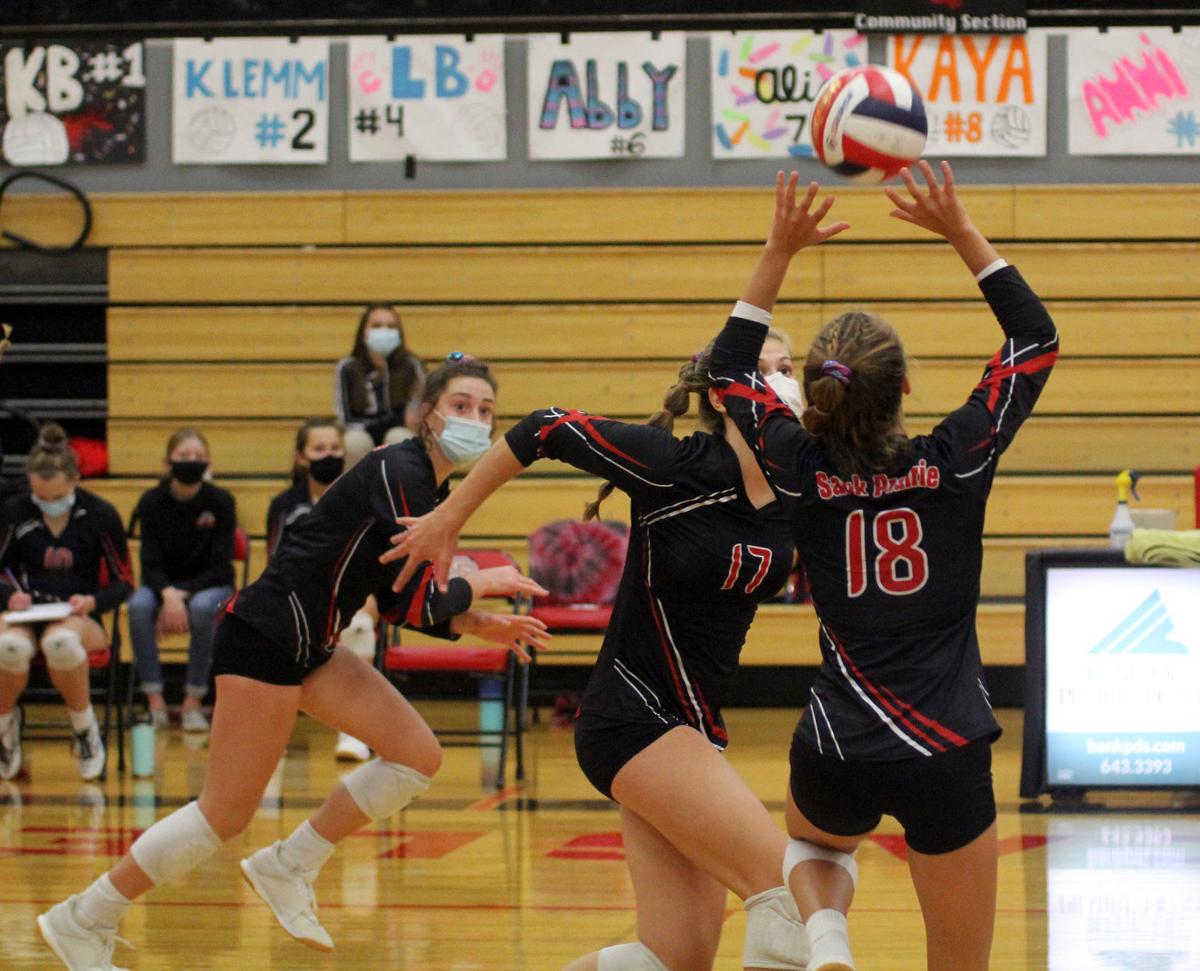 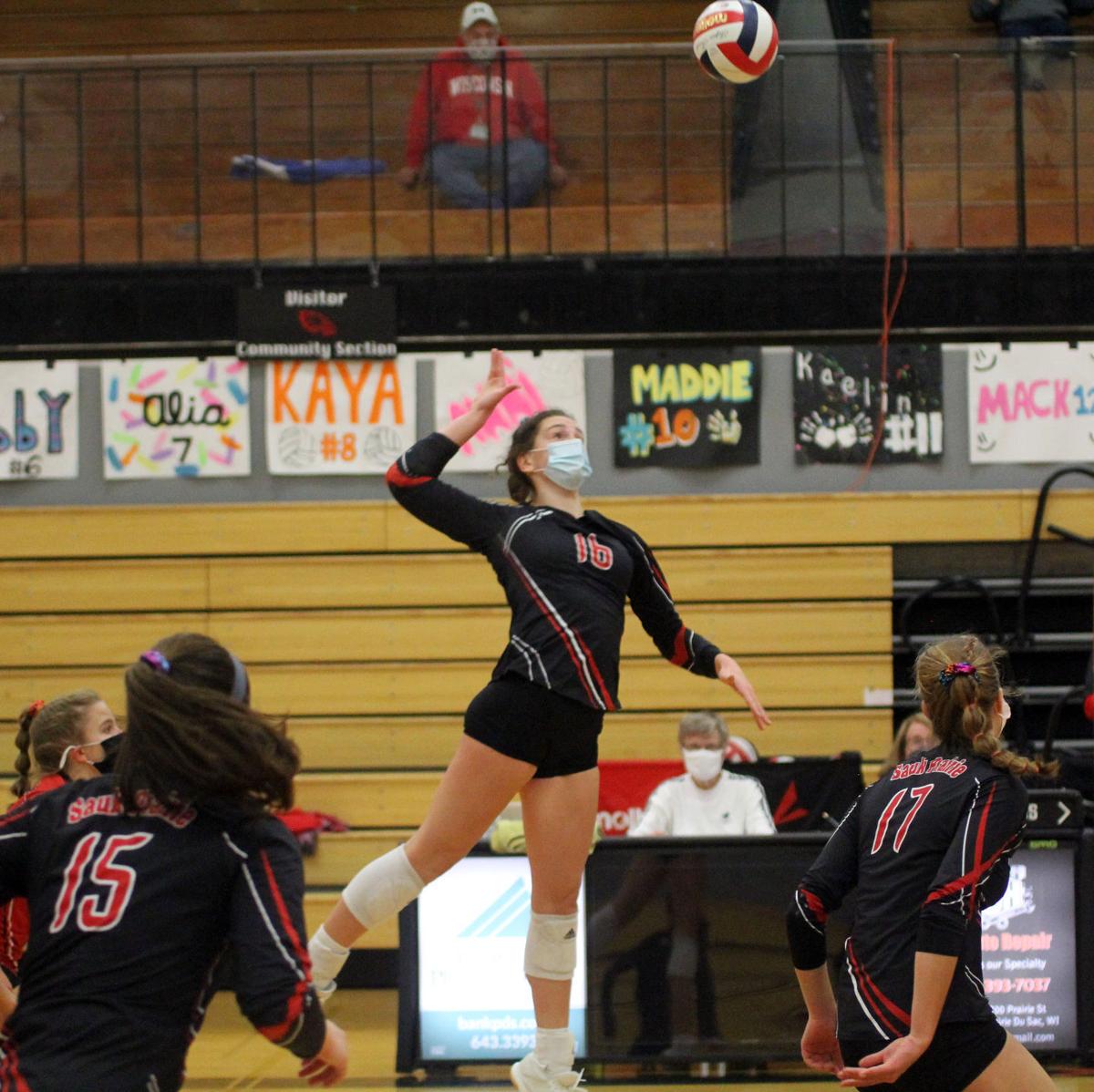 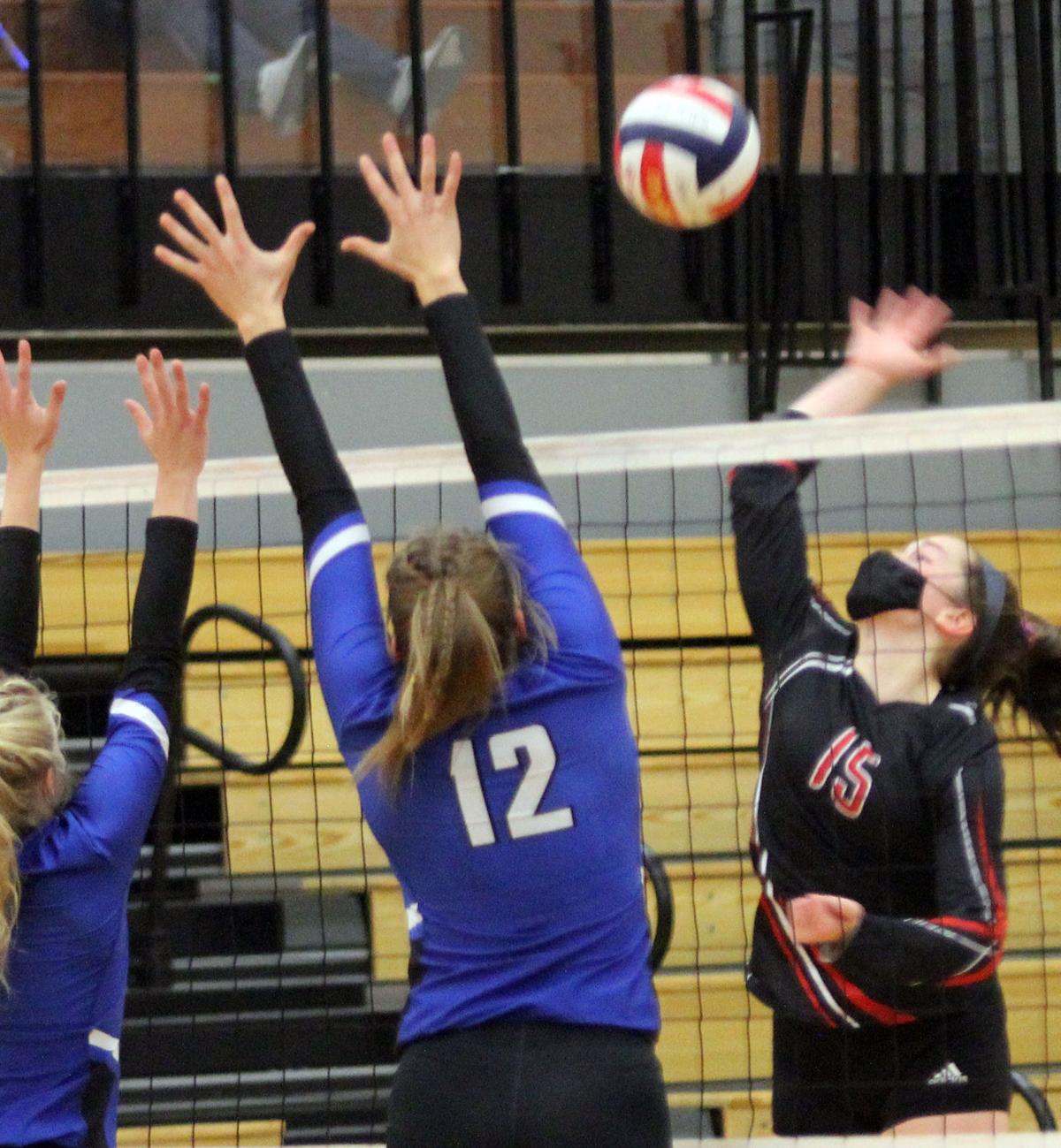 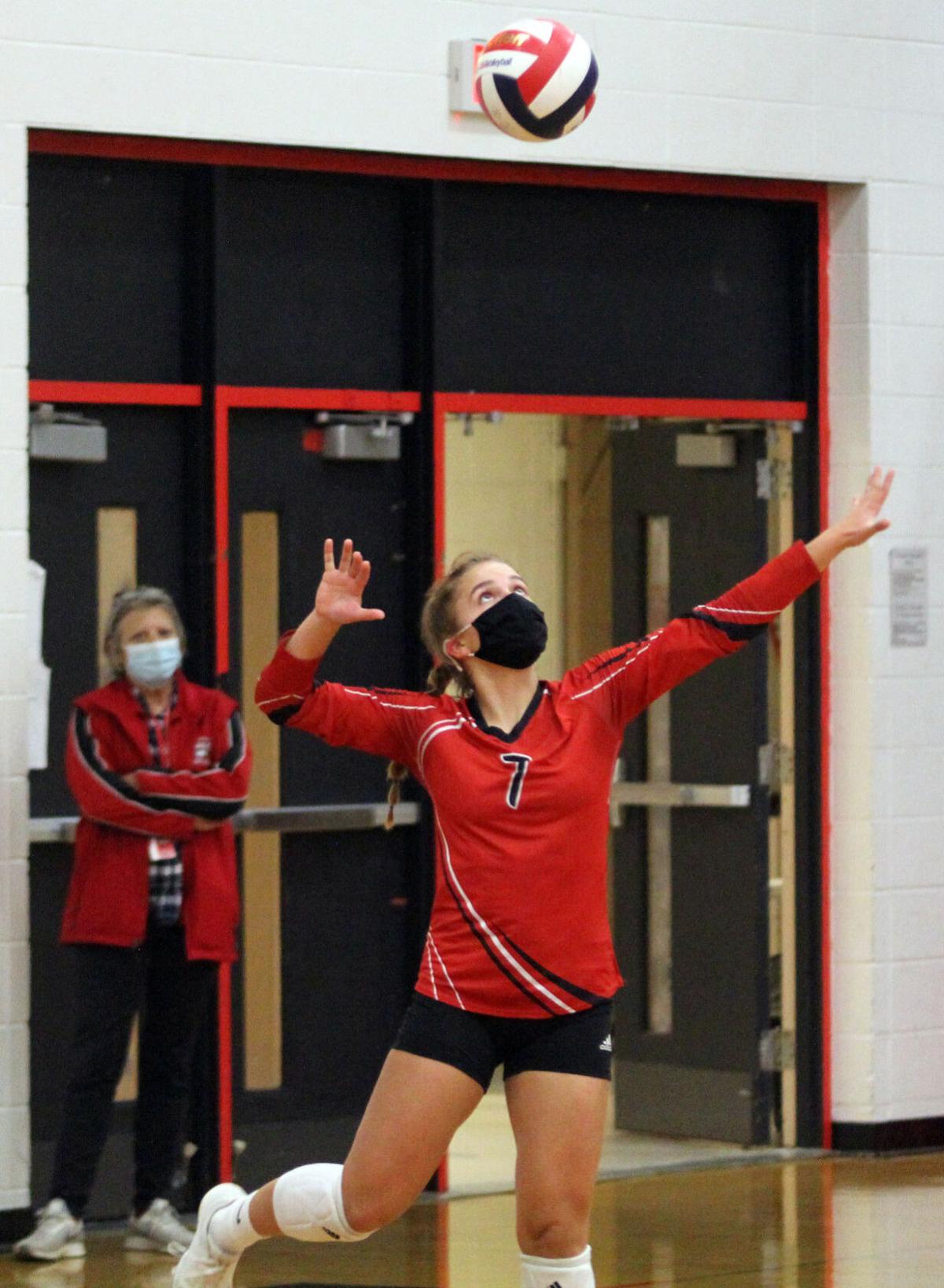 In the end it didn’t matter, as the fourth-seeded Eagles rolled to a 25-12, 25-19, 25-23 win over No. 5 Watertown in a WIAA Division 1 quarterfinal match at Sauk Prairie High School. Sauk Prairie’s dominance showed through over the computer, which is how head coach Amy Schlimgen observed from her home.

“I love how we came out strong,” said Schlimgen, who has to quarantine until at least the middle of next week after an assistant coach tested positive for COVID-19. That bumped junior varsity 2 coach Ryan Ruhland up to the sidelines Tuesday night.

“I’m really proud of the way that they played,” Ruhland said. “It’s a really fantastic squad. They’re putting in the effort in practice that allows them to be successful on game night. As long as they keep doing that, hopefully good things will keep coming.”

Good things came early and often Tuesday. Sauk Prairie (17-4) scored five of the first six points in the opening set and eventually opened up a 17-8 lead to force a Watertown timeout. The Goslings (4-8) never found momentum, as the Eagles pulled away for a 25-12 win.

The second set was a little tighter as the teams traded points early on before an Aida Shadewald kill gave the Eagles an 18-15 lead. Olivia Breunig added a kill, Jenna Pistono served an ace and Maggie Hartwig notched a kill to stretch the lead to 21-15. The Eagles held on from their to claim a 25-19 win and take a commanding lead.

Watertown mounted a late rally in the final set. A Breunig kill had given Sauk Prairie a 22-15 advantage, but the Goslings went on an 8-2 run to pull within 24-23. However, Watertown’s final serve went into the net to send Sauk Prairie to play No. 1 Oconomowoc in Thursday’s regional semifinal.

Shadewald had a big night for Sauk Prairie. The junior tallied a match-high 13 kills, including the 1,000th of her career.

“An extremely high vertical helps a lot,” Schlimgen said of what makes Shadewald so successful. “And she’s got great mechanics, she’s strong and she’s built perfect for volleyball. She’s got everything.”

Breunig paced the Eagles with 13 assists, while Olivia Paukner had 1.5 blocks, Alia Schlimgen had 12 digs and three aces, and Pistonno had three aces.

Sauk Prairie, which won a Division 2 regional title last year, will have a day of practice to prepare for the Raccoons (15-3), which had a first-round bye. Schlimgen, who said she “hasn’t missed a minute” because she can attend practice virtually, has seen some tape on Oconomowoc.

Amy Schlimgen had tailored the Sauk Prairie volleyball team’s schedule with an eye on getting through the WIAA Division 2 playoffs.

The Sauk Prairie girls volleyball team faced a scene similar to one that has played out across the United States this year.