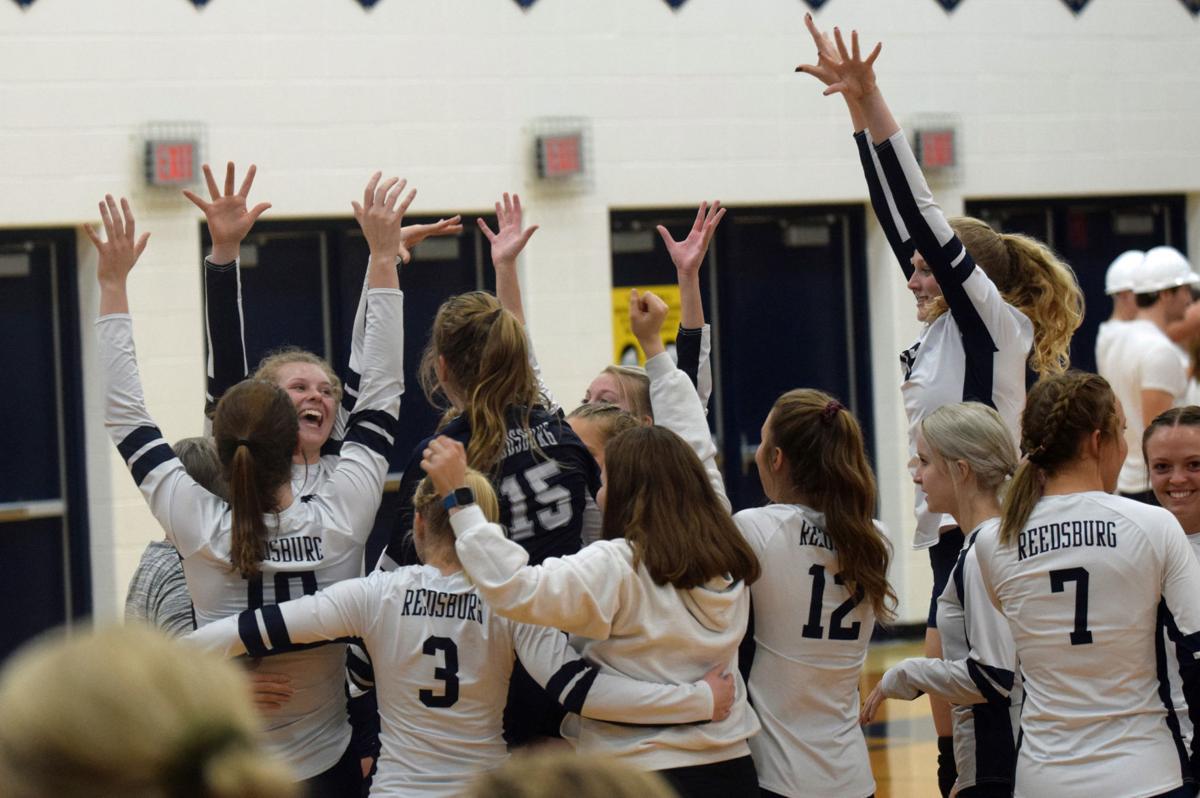 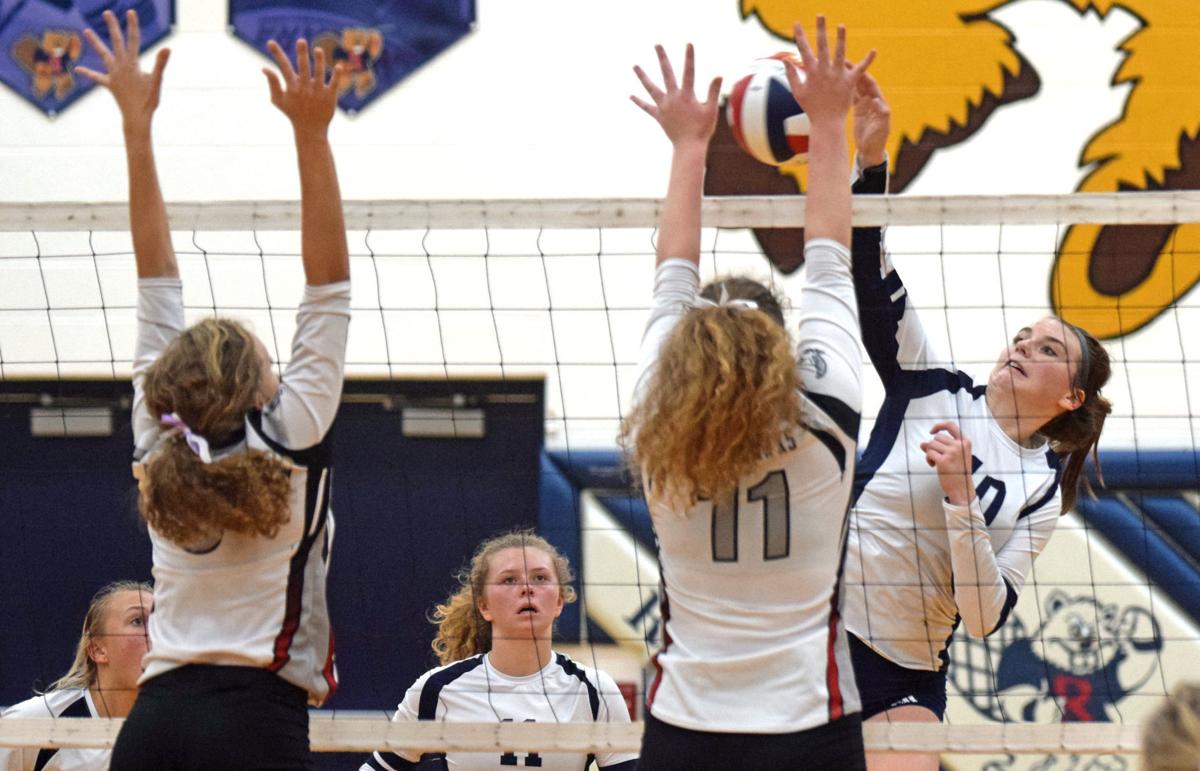 Reedsburg senior Marha Wieman tries to hit through the block of River Valley's Lydia Weiss (3) and Kate Hanson during the first set of Thursday night's WIAA Division 2 sectional semifinal match at Reedsburg Area High School. The Beavers put away the Blackhawks in four sets, 25-22, 25-16, 22-25, 25-15 to qualify for Saturday's sectional final. 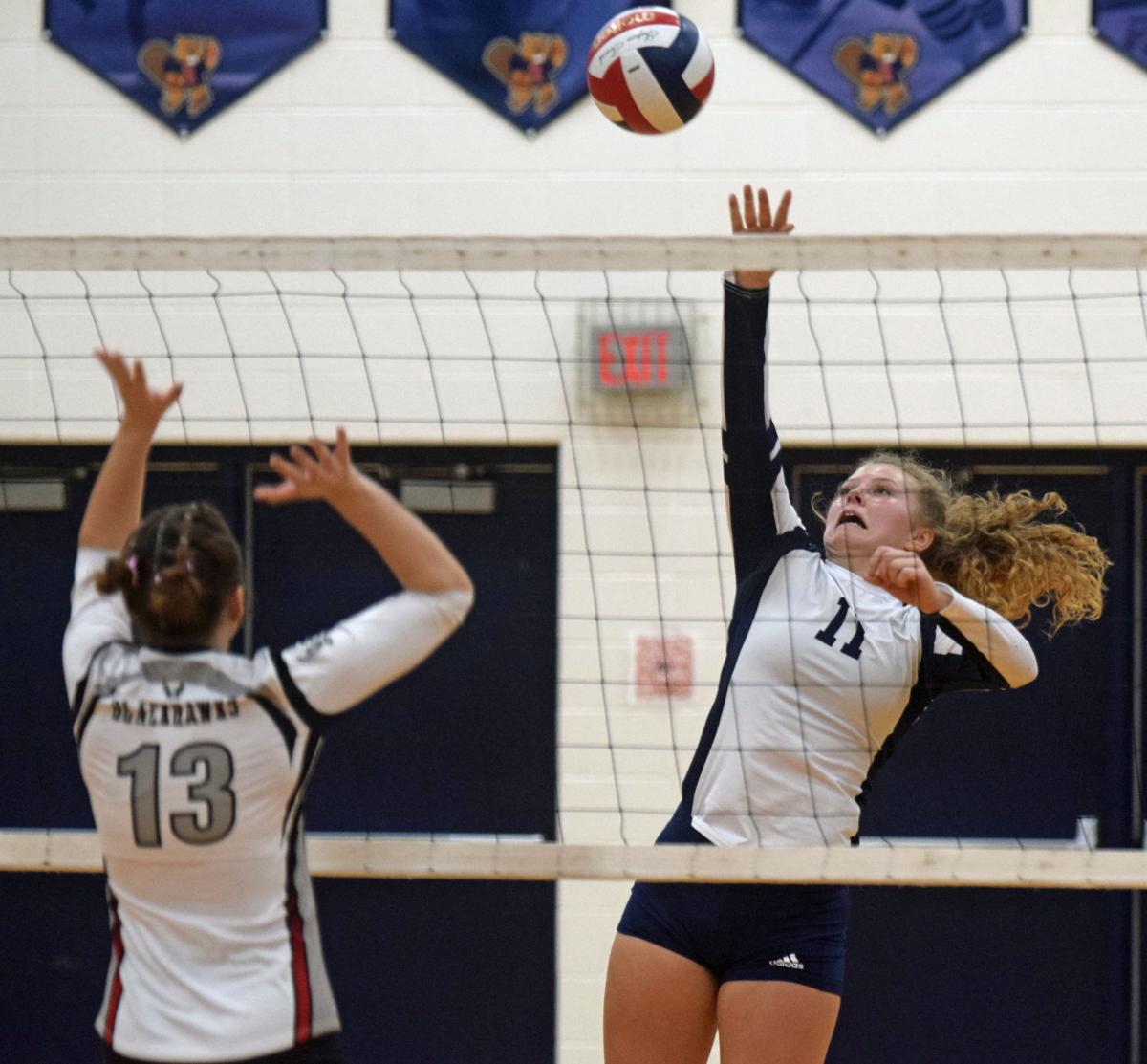 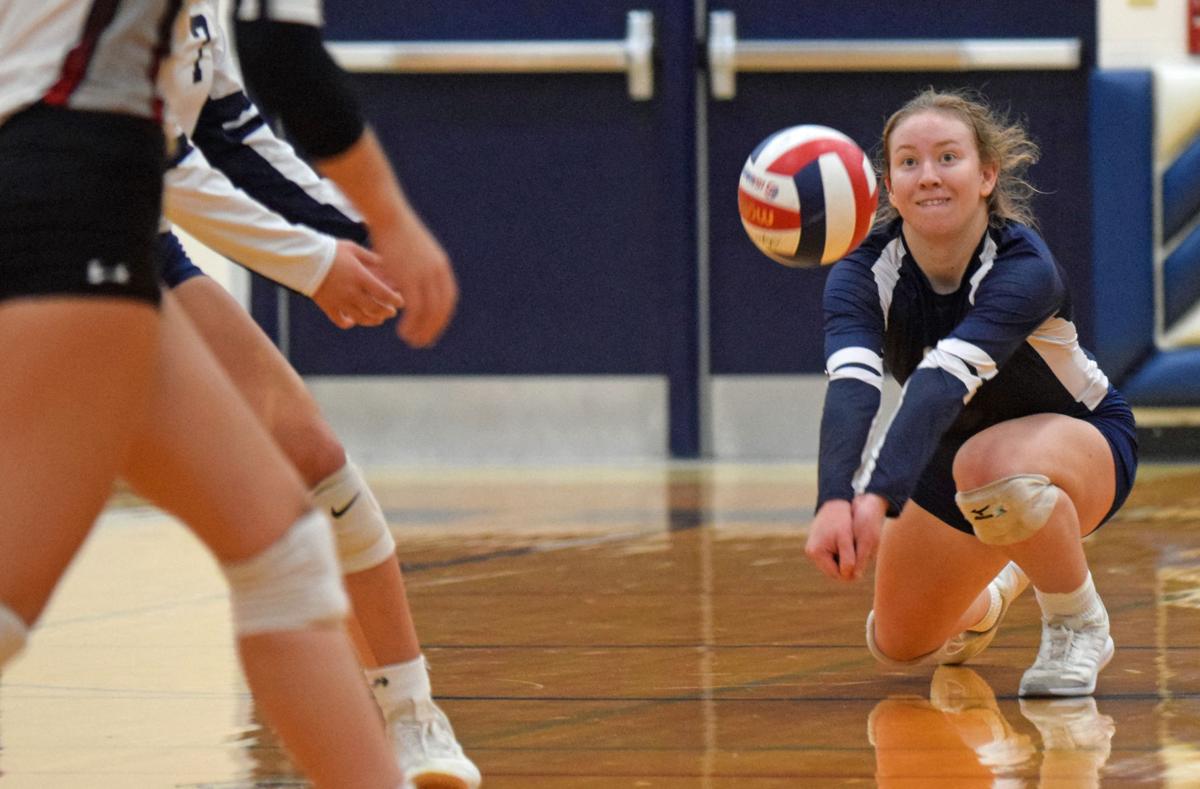 And that heartbreak, a five-set loss Fox Valley Lutheran, was very much on the minds of the top-seeded Beavers.

“We had that loss last year in the back of our minds, and we knew coming out here what we had to do,” Reedsburg senior Mahra Wieman said.

The Beavers definitely stuck to the game plan, keeping No. 6 River Valley at bay with a 25-22, 25-16, 22-25, 25-15 win in a WIAA Division 2 sectional semifinal tilt at Reedsburg Area High School. Mahra Wieman had a game-high 24 kills to go along with four blocks, while senior Macie Wieman had 20 kills and 21 digs to help fuel the Beavers to their first sectional final appearance since before 2000.

Reedsburg will next meet second-seeded Baldwin-Woodville in a Div. 2 sectional final slated for Altoona with the Beavers’ first-ever state berth on the line. The Warhawks rallied after losing the opening set in extra points against St. Croix Central to top the Panthers in five sets on Thursday, 27-29, 25-15, 25-11, 19-25, 15-8.

“It feels really good,” Reedsburg coach Sheila Green said of the win. “We had a great crowd tonight; the environment and atmosphere was phenomenal, and the girls knew, and we’ve talked about it, it’s a ladder. You have to take it one step at a time, play the team that’s across from you and you don’t look beyond them.”

The Beavers (26-8) certainly weren’t overlooking the Blackhawks (20-14). After upsetting third-seeded Platteville and fellow Cinderella, No. 10 Prairie du Chien, to capture their first regional title since 2012, River Valley certainly looked like it was on mission.

That was evident in the early going as neither team led by more than four in the first set and ultimately tied at 15 following a River Valley lift violation. Four more ties followed, with the last one coming at 21-all before the Beavers hammered things home, ending the set on a 5-1 run in which Mahra Wieman had four kills, including the set-clincher off the River Valley block for the 25-22 win.

That momentum carried over into the second set as Reedsburg opened things on a 14-4 run and cruised to a 25-16 win with relative ease.

“That was huge,” Green said. “With a team like River Valley, they’re a team that’s not going to give up; they’re going to keep fighting, be scrappy and they’ve always been known for that. You can never think confidently that a five-point lead is going to remain because they’re going to come at you with it."

That was certainly the case as he Blackhawks ratcheted things up again in the third,

River Valley broke free from a 6-all tie and held on for a 25-22 win to keep things alive. But things quickly turned back in the Beavers’ favor in the fourth.

Reedsburg was hitting on all cylinders from the start and ultimately stretched out the lead to 18-7. The end of that run was especially impressive as the Wieman twins were responsible for six of the team’s eight kills.

A late River Valley rally attempt pulled the Blackhawks within nine at 24-15, but it didn’t matter as Macie Wieman thundered home a kill to seal the win.

It was no surprise to Green.

“They’ve led us throughout the whole season. They’re very steady, have great volleyball IQ and court sense, so to be able to share their information with the other players on the court (has been huge),” Green said.

But while the Beavers’ offense revolves around the twins, the team features plenty of depth in sophomore setter McKenna Oetzman and junior outside hitter Haylee Kast, something the girls know they’ll need soon against the Warhawks.

“It’s really nice because on off nights we need someone else to step up, and I think we have that,” Macie Wieman said. “Being able to be happy for another teammate when they get a kill and do something good, it’s just great because I can be up on myself.”

One thing the Beavers will certainly have is a gritty defense, something that’s been brewing since the midway point last season. According to Green, the group “finally came to a realization,” that getting on the floor to dig out balls was a necessity.

“I just have the mentality that I just have to get a touch on anything I can,” added senior Ella Halvensleben, who matched Macie Wieman with a team-high 21 digs.

Oetzman had 35 assists and three blocks, while six separate Beavers recorded aces in the win. Meanwhile, the Blackhawks got 12 kills and 19 digs from junior Morgan Brickl, senior Kate Hanson had 14 assists and senior Annabelle Willoughby tacked on eight kills in the loss.

With the win, the Beavers are into a sectional final for the first time since before this year’s senior class was born, adding just another notch onto an already momentous year for the group, which included Macie Wieman going over the 1,000-career mark in both kills and digs.

But while that’s all well and good, the group has much larger goals in mind: the program’s first-ever state tournament berth. While that won’t be easy against a game Baldwin-Woodville team that finished second in the Middle Border Conference and enter with a record of 23-9, the key to beating the Blackhawks is easy.

“You just have to take one step at a time and focus on the team that’s on the calendar next. That’s all you can do; play hard each match and hope for the best,” Green said.

“It’s not going to be any easy thing. You have to come in mentally strong and be ready to do what it takes on the court.”

“The ultimate goal is to make it to state. We just have to do whatever it take to get us there,” Mahra Wieman added.

'The girls believed': Central Wis. Christian pushes 4th-ranked Monticello to the max but comes up short

The upset-minded Crusaders won the first set in memorable fashion, nearly stole the fourth set but ultimately succumbed to the Ponies, bowing out of playoffs in Div. 4 sectional semifinals

The Sauk Prairie High School volleyball team is a win away from back-to-back state tournament appearances.

The Wolves won their first regional championship since 2011, while Mauston, Necedah and New Lisbon each lost in Level 1 of the prep football postseason.

The Reedsburg and Sauk Prairie girls volleyball teams both earned a spot in the WIAA Division 2 sectionals by winning regional titles on Saturday night.

The Randolph prep girls volleyball team is gaining traction as it steamrolls through the WIAA Division 3 postseason.

An experienced group and tons of energy have the Beavers hoping to make some noise in the first state appearance for the program and longtime head coach Sheila Green.

Reedsburg senior Marha Wieman tries to hit through the block of River Valley's Lydia Weiss (3) and Kate Hanson during the first set of Thursday night's WIAA Division 2 sectional semifinal match at Reedsburg Area High School. The Beavers put away the Blackhawks in four sets, 25-22, 25-16, 22-25, 25-15 to qualify for Saturday's sectional final.