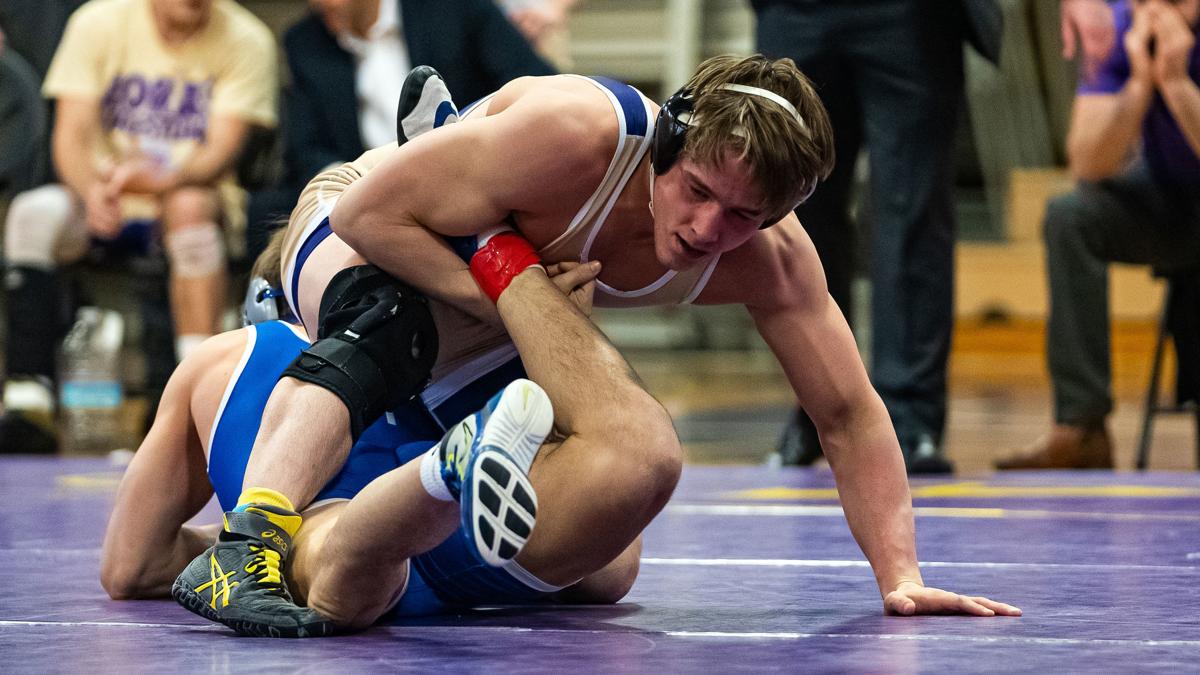 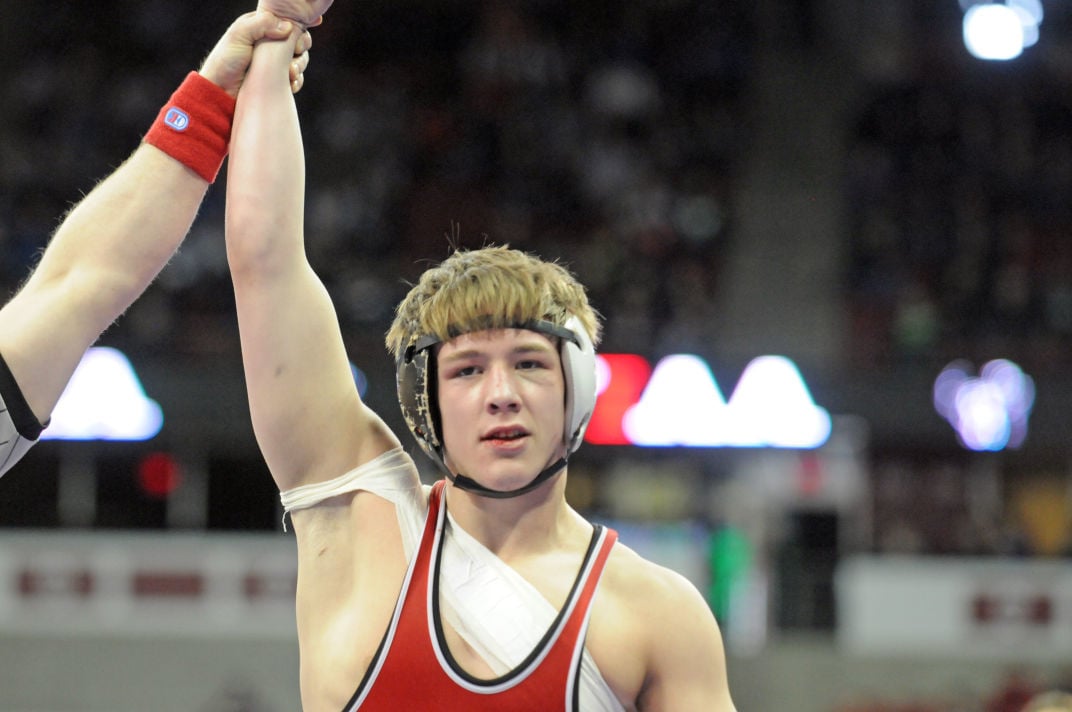 An injured Eddie Smith, of Sauk Prairie High School, has his hand raised after defeating Shane Gantz of Waukesha West to take fifth place at the WIAA State Individual Wrestling Tournament in Madison on Feb. 27, 2016.

Eddie Smith told quite a story during his wrestling career.

The story came to a halt there, as the COVID-19 pandemic will likely keep the Sauk Prairie High School alum a couple days shy of finishing his tale. Smith, who was seeded fifth nationally in the 165-pound weight class, and his Loras College teammates were pulled off the mat just prior to the start of the NCAA Division III championships on March 13 in Cedar Rapids, Iowa.

"Our coach just had a meeting, and we were all down waiting," Smith said of the final moments of his college career. "After the meeting, he said 'alright," gave us our passes and we got ready to go. And then he texted us immediately and said 'come back, we need to have another meeting.' And that's when he told us it was canceled. Everyone just started crying. It was really sad... just a bunch of grown men crying.

"We stayed in Cedar Rapids that night and just hung out as a team. ... Being together helped, I guess, because we were all going through it together, but it sucked."

It especially hurt for a Loras program that was the runner-up to Augsburg last year, and entered the 2020 championships ranked first and looking for the first national title in program history. Smith, who took fourth at 165 pounds last year, was one of several Duhawks expected to compete for an individual title.

"It was really tough for him, for the whole team really," said Eddie's brother, Zeke, who had his sophomore wrestling season at Loras ended early by a knee injury. "We were expecting to not only have multiple individual champions, including Eddie, but to have a national team title. It was really hard for Eddie and for our whole family. Just seeing all the work he's put in and being obsessed with wrestling since kindergarten, working towards this ultimate goal of achieving this accomplishment. It'd be one thing if he had wrestled and not wrestled very well and not accomplished what he wanted to; that would have been a lot easier to swallow than just have it completely vanish and not even get the opportunity. It's a terrible experience and a terrible feeling.

"That was a tough weekend, having nationals get canceled and then school get canceled, because we were all sad about having to go home. We were just trying to spend as much time together as possible before we had to take off. There were a lot of sad conversations about missed opportunities and stuff. It was a pretty sad time, and I'm sure a lot of the guys are still wrestling with that and trying to get their minds wrapped around losing that big opportunity."

The tight-knit Smith family has always bonded on the mat. Eddie and Zeke wrestled for their dad, Scott, who was the head coach at Sauk Prairie High School throughout their high school careers. They each won Badger North Conference championships all four years and placed at the WIAA state meet multiple times. Eddie put together a sixth-place finish and a pair of fifth-place finishes despite dealing with a number of ailments during childhood, including Lyme disease, Bell's palsy, mental confusion, headaches, fatigue and nausea.

"Our whole family loves Eddie so much, and he's been through the ringer with being sick in middle school and high school and not always being able to compete," said Olivia Smith, the youngest sibling who is a freshman volleyball player at Loras. "We don't even care what he does, we just want what he wants. He wanted to wrestle at nationals and he wanted to be a national champion ever since he was little, so that was heartbreaking and devastating just because we knew how badly Eddie wanted it."

The Division III meet was a casualty of the NCAA's decision to cancel winter championships to prevent the spread of coronavirus. Wrestlers received more bad news March 30, when the NCAA decided not to offer winter student-athletes an extra year of eligibility like their spring counterparts will receive.

"They denied the appeal for extra eligibility, which was like feeling it all over again," Eddie said, noting that there are petitions asking the NCAA to reconsider. "People here at Loras are doing everything they can, writing congress people and stuff. We're still fighting for it, but we'll see."

Smith said he would love another opportunity to take the mat at Loras — even if just for second semester and the NCAA championships. He and his classmates had been building toward that moment since they stepped on the Dubuque, Iowa campus. They arrived at the same time as coach T.J. Miller, and set out to turn around a program that compiled a 2-13 record in 2015-16.

"Guy Patron and Clint Lembeck were two of the guys that qualified," Eddie said of his long-time teammates who also had their senior seasons come to a sudden end. "We came in as freshmen and were all four-year starters. We watched the program grow from what it was to what it is now. A lot of history there. It was really emotional for all three of us to get our title chances taken away. And then (senior) Brandon Murray and (junior) Jacob Krakow are two guys that transferred here. They've been my training partners and have become like my best friends. Watching them dealing with that was tough too."

"The most important thing is you have to change the culture, which is something my dad's always preached," Eddie said of turning the program around. "T.J. Miller, Trevor Kittleson and our coaches understand that. It's more than just getting talented guys. You have to have talented guys, but you have to have a team that's willing to work hard and do anything for a common goal. Fight together for that goal and work hard every day to achieve that. The culture wasn't that when we got here, but that's what it's become because of the coaches and because of kids who have bought into that.

"The main one for competition is 'fight and effort.' Don't worry about the result, just worry about giving your 100% effort. Fighting the entire time for your team. Even if you don't feel like it, it's bigger than you, it's more important than you, because you're doing it for your team and for your brothers."

The real breakthrough came this year, as they put together their first unbeaten conference season, going a perfect 8-0 in the American Rivers to snap Wartburg's run of 27 straight titles.

"It was going great," Eddie said of his senior season. "We beat Wartburg... that was insane, I couldn't believe that. And at the regional tournament, we beat Wartburg again and had eight national qualifiers, which is our record and I think we beat the regional points record too. Those are too huge things, and I felt great going into the national tournament. It was a great season."

"I definitely got a lot more confident in myself and gained the ability go harder for a longer period of time," Eddie said of his development at Loras. "In high school, you pin a lot of guys. In college, pretty much every match is tough. You have to be ready to get up for every match, and that's not easy to do at all. But you have to, otherwise you're going to lose — and I hate losing. It forced me to get tougher, otherwise you kind of have to be resigned to the fact that you're not going to be that good. Because you come in and, unless you're a phenom, you're getting your butt kicked. So it's 'alright, I have to resign to getting my butt kicked for the next four years, or I have to take the steps to improve myself and do what I want to do.'"

The Smiths — and most college students in the United States — will finish out the spring semester online. By the end of it, Eddie should have a degree in politics and a minor in business.

"I definitely got into it in high school a little bit, but I didn't know what I wanted to major in," Smith said of his interest in politics. "I started taking some classes, and now I'm obsessed with it. I've just always seen a lot of injustices in the world, and I see now that a lot of that is due to political things, so I'd like doing something about that."

While his competitive career was brought to a halt, Eddie plans to stay heavily involved in wrestling, starting with helping coach Loras next season.

"I'm sticking around to help coach, and help coach my brother," he said. "I've coached at a lot of camps during the summer, and helped my dad with the Sauk guys whenever I'm home, but I haven't had that much experience. I'm looking forward to doing a volunteer assistant thing at Loras next year, helping out whenever I can and seeing if that will lead into anything else."

WAUNAKEE -- Zeke Smith was one of only three wrestlers to earn a pin in a championship match at the Badger Conference meet Saturday, putting him in elite company. Nonetheless, his father and Sauk Prairie head coach Scott Smith said he could probably still take his son.

Adam Juran went through it all during his freshman year of college baseball.

Regin Suchla was rolling until the bat was taken out of her hands.

It’s been a special few years for the University of Wisconsin-Stevens Point men’s hockey program.

Josie Schaefer was ready for one of her biggest events of the year when the United States sporting world began to shut down.

Dawson Hinz isn’t going to have much trouble playing golf the rest of the life.

With three Loras College athletes this past year, the Smith family wore down the road from Prairie du Sac to Dubuque, Iowa.

An injured Eddie Smith, of Sauk Prairie High School, has his hand raised after defeating Shane Gantz of Waukesha West to take fifth place at the WIAA State Individual Wrestling Tournament in Madison on Feb. 27, 2016. 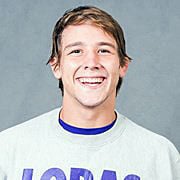