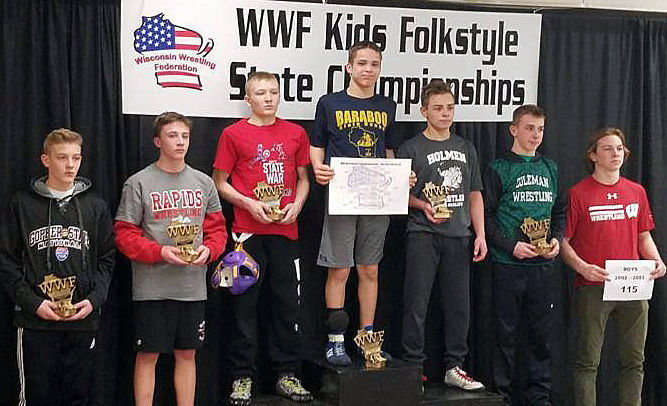 Baraboo's Brandon Jesse stands atop the podium after winning the 2002-2003 (birth year), 115-pound weight division at the youth state meet held at the Alliant Energy Center in Madison on Saturday.

Brandon Jesse took the ultimate prize, winning the 115-pound state championship on Saturday at the Alliant Energy Center in Madison.

In a return trip to state, Jesse found his way to the top of the 16-man bracket with wins over opponents from West Bend (pin), Coleman (4-1), Medford (3-1) and Two Rivers (5-2). It was the first Baraboo youth state championship since Carlos Chavez and Spencer Payne won titles in 2012.

“Nobody has worked harder than Brandon the last few years,” coach Dan Gunderson said. “He’s as dedicated and coachable as they come. We expect much more from him moving forward.”

Carlos Chavez (145 pounds) also finished his final youth season with a successful trip to state. After a first-round loss, Chavez stormed back with five straight wins to take third place.

Chavez’s final match was an 11-10 thriller against Javon Leisgang of Seymour, as Chavez erased a 9-4 deficit in the last 20 seconds. It was the fourth time Chavez has placed in the top four at state.

After a year off and an injury-plagued season, John Gunderson earned a top-five finish at state for the sixth time, finishing his youth career with 22 state wins. Gunderson went 4-2 this weekend, taking fifth place at 160 pounds. His final match was a 6-4 win against Peter Rucker of Wisconsin Rapids.

Seventh-grader Levi Kline (130) finished third at state. Kline had a pin and three wins by a combined score of 27-3, while his lone loss came by a score of 4-2.

Baraboo's Brandon Jesse stands atop the podium after winning the 2002-2003 (birth year), 115-pound weight division at the youth state meet held at the Alliant Energy Center in Madison on Saturday.