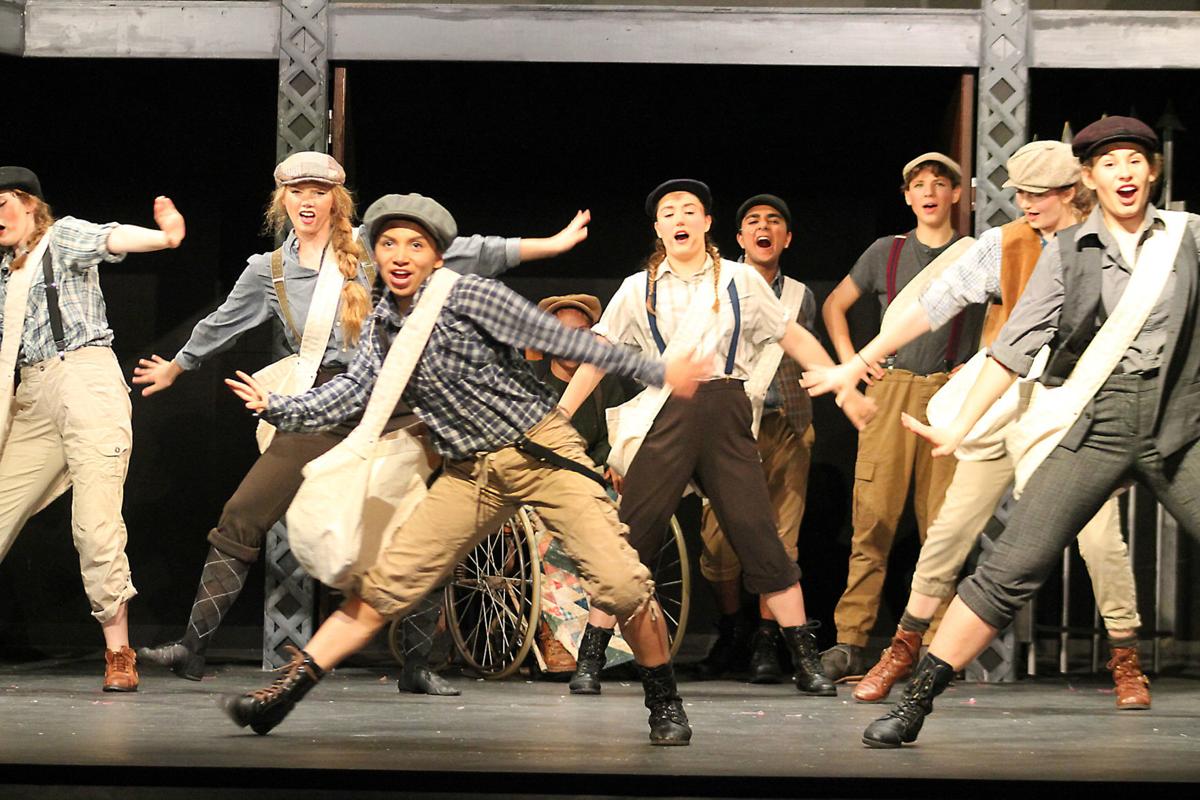 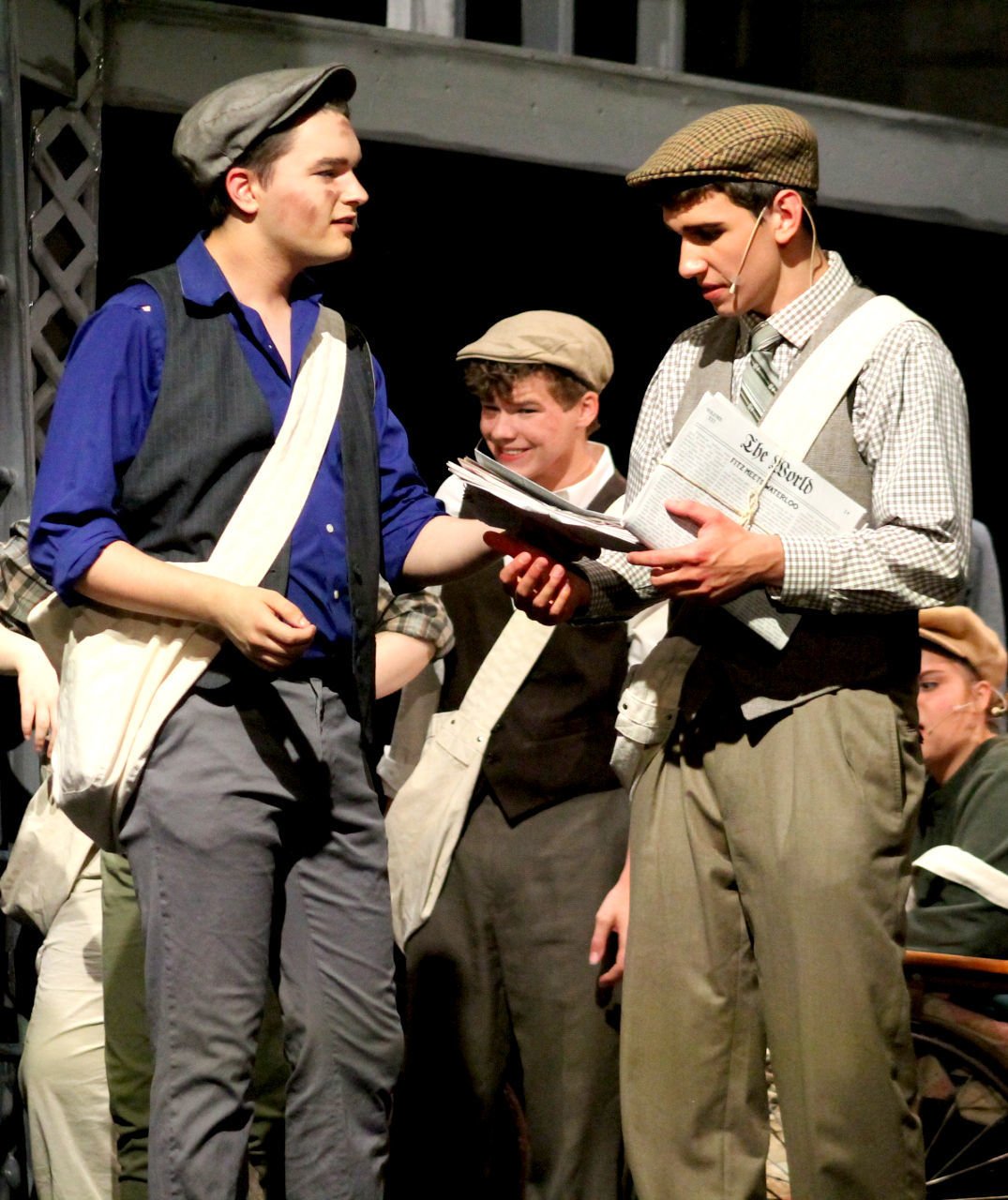 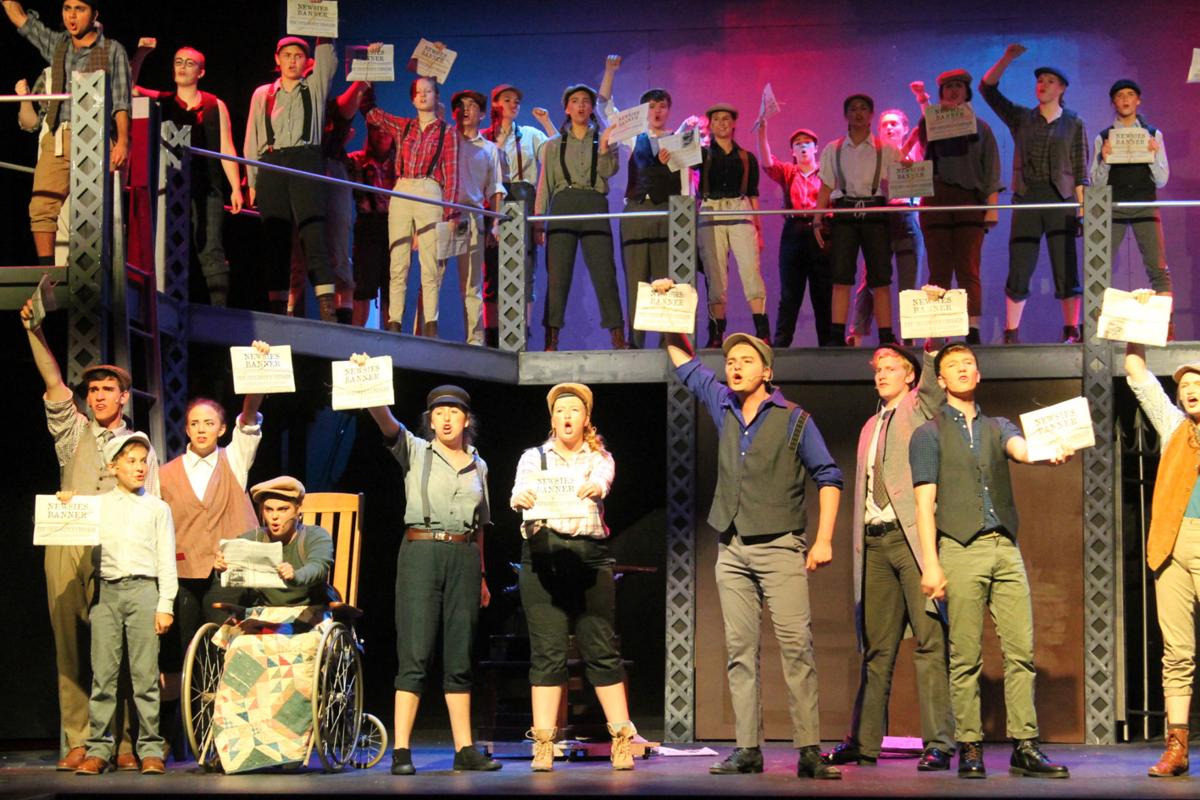 During Saturday's "Newsies" rehearsal in Beaver Dam, the newsies sang "Once and for All" while proudly displaying the paper they printed on their own to tell people why they went on strike. The all-area high school production begins Thursday at the BDACT Fine Arts Center.

Students from 15 schools are ready to hit the stage this week as Beaver Dam Community Theatre opens its production of Disney’s “Newsies.”

The all-high school show features more than 60 student performers, which is a big jump in cast numbers over past years. A high school musical was added to the BDACT’s summer schedule in 2017. Director Mark Lefeber said the program has almost doubled in size since then.

“The high school show may be gaining traction, or the titles may have gotten more appealing to kids,” he said.

“Newsies” is a musical based on the 1992 motion picture that was inspired by the true story of the 1899 newsboys’ strike in New York City. It features a Tony Award-winning score by Alan Menken, lyrics by Jack Fedlman and book by Harvey Fierstein.

The show stars Aidan Black from Portage as Jack Kelly, Gwen Fischer from Cambria-Freisland as Katherine Plumber and Annie Friedl of Beaver Dam as Medda Larken. Other leading characters include Leo McEvilly from Portage as Crutchie, Jon Coder from Mayville as Pulitzer and Luke Hahn from Waupun as Davey.

Lefeber said it’s not just the cast that is coming from surrounding cities.

“Something cool this year is that our pit could be bigger because of the new facility,” he said. “I put a call out to band and orchestra directors asking for kids good enough to play in a musical pit and put together an application process. So we have an all-area orchestra pit this year.

“A drummer and trumpet player are coming from Lodi. The reeds player, who’s playing five different instruments, is from Oconomowoc. String players are coming from Sun Prairie. We’ve got Beaver Dam kids in there, too.”

Student assistants are also being mentored on lights, sound and costume design.

Cassie Coenen from Beaver Dam has finished her second year at UW-Whitewater and is returning to conduct the pit for the third year in a row. Popular songs from the musical include “Carrying the Banner,” “Seize the Day” and “Santa Fe.”

Lefeber said he’d love to see more college-age involvement with the high school show, and he may take on a student director at some point.

“Theater starts in Beaver Dam in elementary school with the Tell-a-Tale program and we keep them going with the middle school show and now the high school show. We need those college kids to learn how to direct and conduct, how to design costumes and do lights and sound or stage manage,” he said. “They can take that with them into the future if they move to a different city or they can continue to grow here. That will help build up community theater — and that continuity goes through to make our adult shows all the better.”

Tickets are $10-$14. Student rush tickets are $8 and can be purchased 30 minutes prior to each show. For more information, go to bdact.org.

Tickets: Prices vary; available at bdact.org, Rechek’s Food Pride or at the BDACT box office Tuesdays and Thursdays from 10 a.m. to 7 p.m.

The spotlight shone bright on area students Sunday as the Jerry Awards were presented at the Overture Center in Madison.

Jam by the Dam returns to Beaver Dam Friday

Membership Show set at Dodge County Center for the Arts

Established artists along with new and emerging ones will have their work exhibited at the Dodge County Center for the Arts beginning Friday.

During Saturday's "Newsies" rehearsal in Beaver Dam, the newsies sang "Once and for All" while proudly displaying the paper they printed on their own to tell people why they went on strike. The all-area high school production begins Thursday at the BDACT Fine Arts Center.