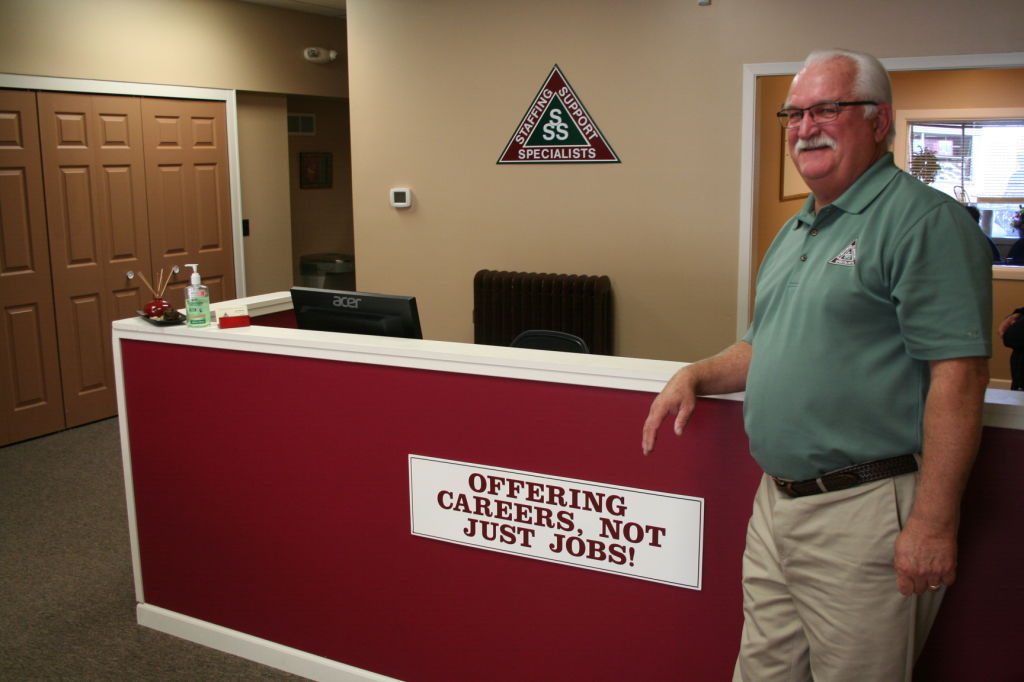 Pat Frank, president of Staffing Support Specialists, 133 Front St. recently moved to the downtown because he said he believes a small community is made stronger with a solid downtown district. 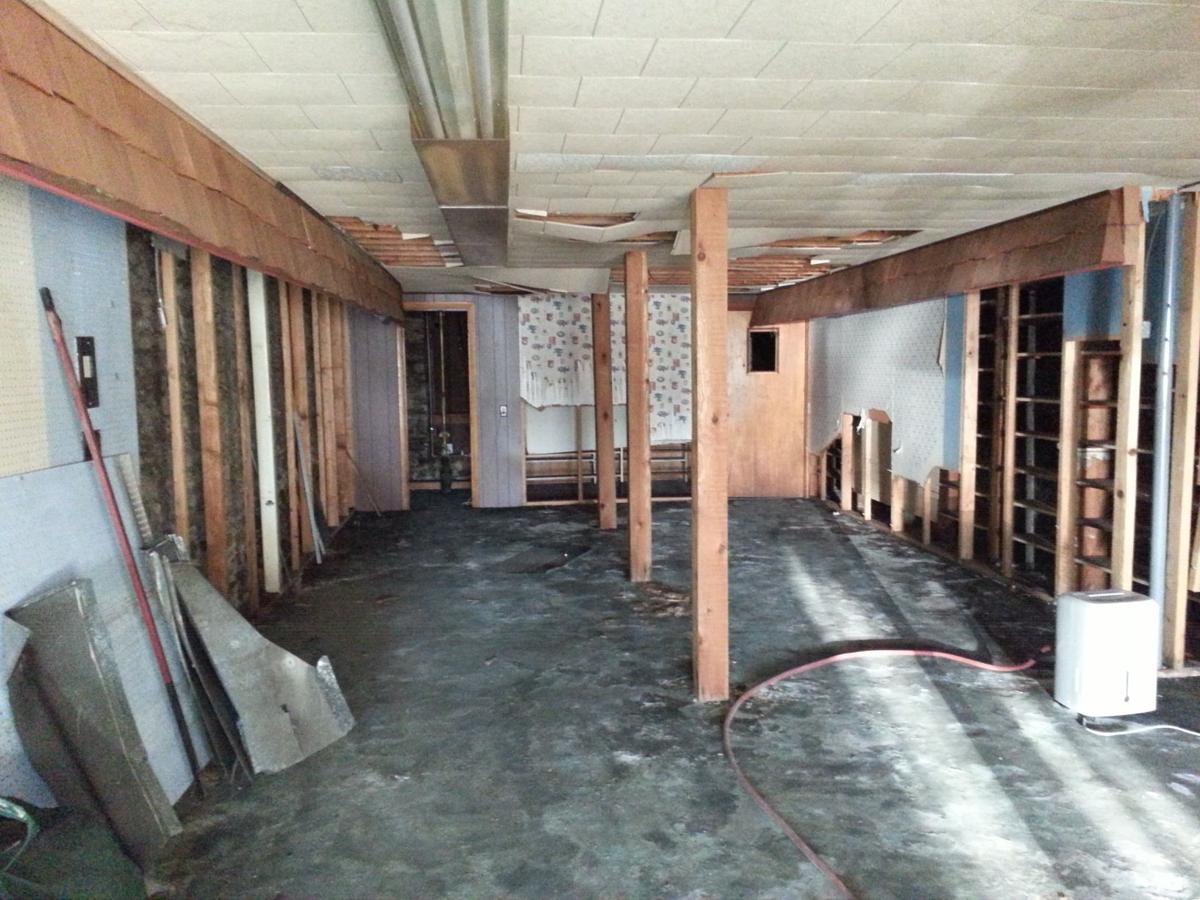 Pat Frank said a lot of work had to be done once he purchased the space at 133 Front St. The basement, as seen here, was a “mess” according to Frank due to flooding. So he stripped the floor and refinished it, buffed the floor and had a mason repair the stone walls. 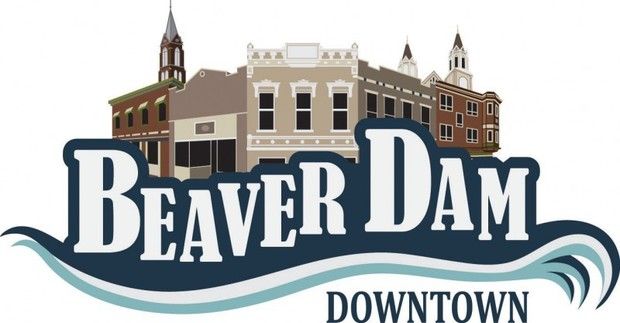 Pat Frank moved his business to downtown Beaver Dam and into one of the more than 20 vacant storefronts because he wants to support downtown.

“I’ve always felt that the small town really needs a solid downtown district if it’s going to be a complete community,” he said.

Staffing Support Specialists at 133 Front St. opened over the summer. Frank’s business is a staffing agency that aims to support the business and manufacturing sectors in Dodge County. Frank has been working in Beaver Dam for more than four years and just recently made the move to downtown.

It was the only place he looked to move his business despite the poor conditions in about half of the vacant buildings he looked at.

“They were in pretty poor shape,” he said. “Probably half of them needed major structural work.”

Some properties were half remodeled or the original owner never finished the work, he said. Frank knew his work would be cut out for him. In October 2013–he bought the property from a local owner and in January–he started a 9-month renovation of the vacant property.

“It kind of looked good on the surface, but there was some internal problems that needed to be fixed,” he said.

Those fixes included adding a new boiler, new central air, and upgrading the electrical and carpeting. The basement was a “mess” due to flooding so he stripped the floor and refinished it, buffed the floor and had a mason repair the stone walls. In the end, Frank is pleased with the result and excited to see the future for downtown.

“It’s an important fabric of a community,” he said.

Frank is one of many threads that have been holding downtown together.

Ric Fiegel from McKinstry’s Home Furnishings, 131 Front St., guesses that there are about 87 active business downtown.

“There aren’t 87 businesses in almost any malls,” he said. “It’s amazing when you start looking at it.”

He thinks all the vacancies will be filled eventually. It will take cooperation from the community, groups like Downtown Beaver Dam Inc. and the city to get it done.

Frank is an example of the cooperation between the city and downtown business. He said the city is “very pro-business” and he encountered no roadblocks in his move to downtown.

A staple of Beaver Dam’s downtown area has been Kornely’s Craft and Hobby Center, 130 Front St. In August, owners Lee and Barb Kornely said they would be liquidating their crafting and hobby supplies to focus on the framing side of their business. Lee said some people thought it was blow to the downtown area.

Lee said he’s just getting old and wants to do other things in his life. The property is up for sale and Lee said some interest in the property makes him think the building will not become downtown Beaver Dam’s 23rd vacant storefront.

Taking care of a family’s needs is what Lee says keeps the community returning to downtown.

“You need to focus on the entire family so when they come downtown, the downtown can take care of them and their total needs,” he said.

Lee’s philosophy for downtown business places the attention on the community and customer with long-term care. His opinion is that the long-term support is not a priority for big box department stores like Wal-Mart, which focus on immediate profit.

In order for downtown businesses like Kornely’s, Staffing Support Specialists and McKinstry’s to prosper with downtown, the public needs to want to come there.

Earlier this month, a strategic downtown meeting was held at Northwoods Casket Company, 109 N. Lincoln Ave., where 18 members from DBDI and guests shared ideas and forecast the next four years for downtown.

The three-hour meeting outlined the positives such as the success of the River Market, the holiday parade and a mural campaign. While the group sees the momentum downtown has gained over the years, some said a lack of communication and proactive attitude is hampering revitalization efforts.

Alderperson Donna Maly was the sole common council representative at the meeting and said people need to talk face-to-face with their alderpersons. She said most Beaver Dam alderpersons never hear the concerns about downtown.

“If it hurts their [constituents’] pocket book, I will hear from them,” she said.

A goal of inclusiveness with downtown businesses and Beaver Dam’s community was a positive force through the final moments of the meeting. Maly said community input will shape downtown’s relevance in people’s lives in the future.

Furthermore, Zahn said they need to contact the 10 vacant property owners who live outside of Beaver Dam and encourage them to either sell or use their property to better the downtown area.

Greater funding is another step for the group. Zahn said the vision of downtown revitalization can’t be done with just grant funds.

If all goes well, Zahn said he hopes businesses will stay open late on weekends and an active nightlife will emerge with sidewalk dining and a vibrant cultural and arts scene.

According to him, this is just the beginning of bigger plans in the future. With Beaver Dam Area Community Theater’s plans for a new theater in the downtown, the Watermark community/senior center, a newly designed Front Street by the end of next year and the inclusion of young entrepreneurs, he thinks it’s possible to bring people from outside the community to enjoy what downtown Beaver Dam has to offer.

It is clear optimism is not in short supply when it comes to Beaver Dam’s downtown according to those in DBDI. But, downtown’s advocates are not blind toward both vacancies and a lack of local ownership–among other problems.

Frank said he wouldn’t have moved his business to downtown Beaver Dam if he thought it was trending downwards.

“I think things are on the right track,” he said. “It’s always sad when you see open buildings that are maybe not taken care of as well as they should have been over the years, but hopefully someone sees the diamond in the rough, takes a chance and makes a go of things. I love downtown.”

“Downtown at the crossroads” is a three-part series focusing on Beaver Dam’s changing downtown.

Part one looks back to 2006 and details major developments, struggles and bright ideas downtown has experienced up to the present.

Part two will take a look at the barriers preventing downtown’s revitalization from progressing.

Part three features interviews from downtown business owners and a look into the future of downtown Beaver Dam.

Ric Fiegel thinks after the Highway 33 construction, set to break ground this summer, the downtown will light up again.

Pat Frank | Why downtown is important

Ric Fiegel believes it's not hard to turn a vacant property into an attractive business in downtown Beaver Dam.

In total, 22 vacant properties exist in the Downtown Redevelopment District making up about 12 percent of downtown’s buildings.

Beaver Dam’s downtown is at a turning point.

The narrow halls and musty classrooms in the former St. Patrick School in downtown Beaver Dam will open up with the sounds of dance and music …

Pat Frank, president of Staffing Support Specialists, 133 Front St. recently moved to the downtown because he said he believes a small community is made stronger with a solid downtown district.

Pat Frank said a lot of work had to be done once he purchased the space at 133 Front St. The basement, as seen here, was a “mess” according to Frank due to flooding. So he stripped the floor and refinished it, buffed the floor and had a mason repair the stone walls.