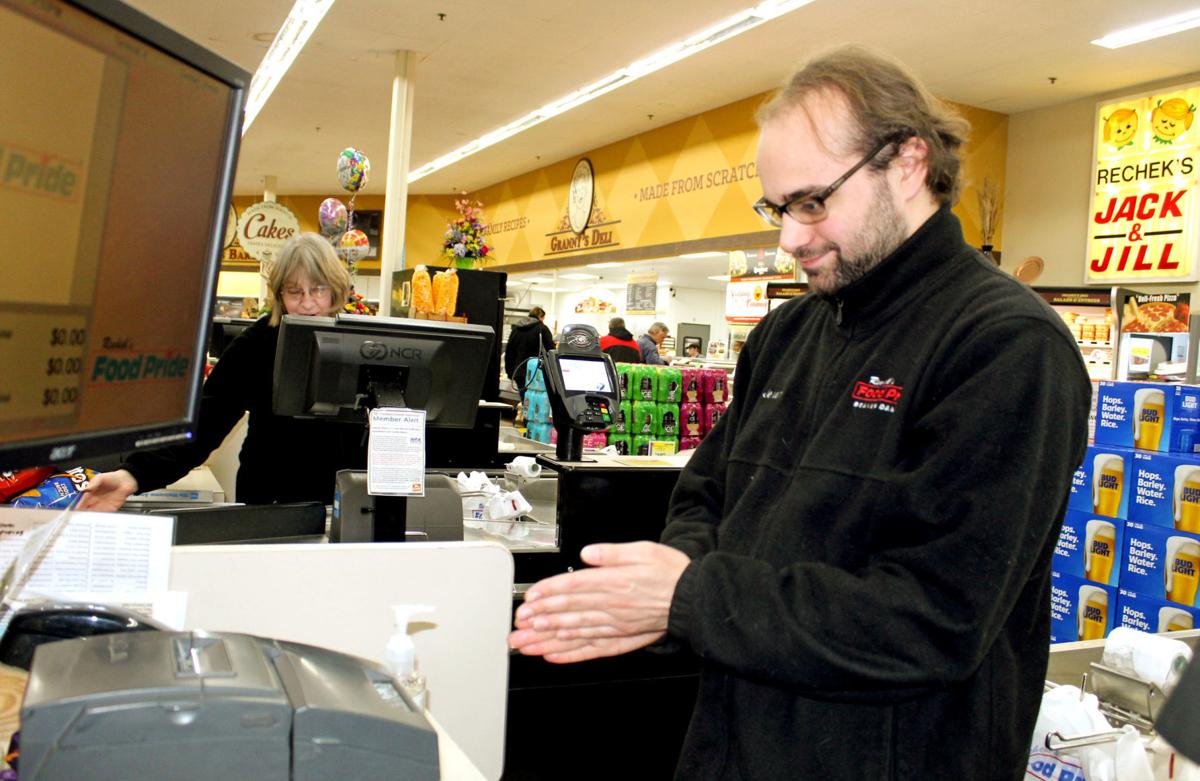 Jeremy Pogorelec, an employee at Rechek's Food Pride, uses hand sanitizer in between customers while working as a cashier at the store. It is one the additional precautions taken in an attempt to slow down the spread of COVID-19. 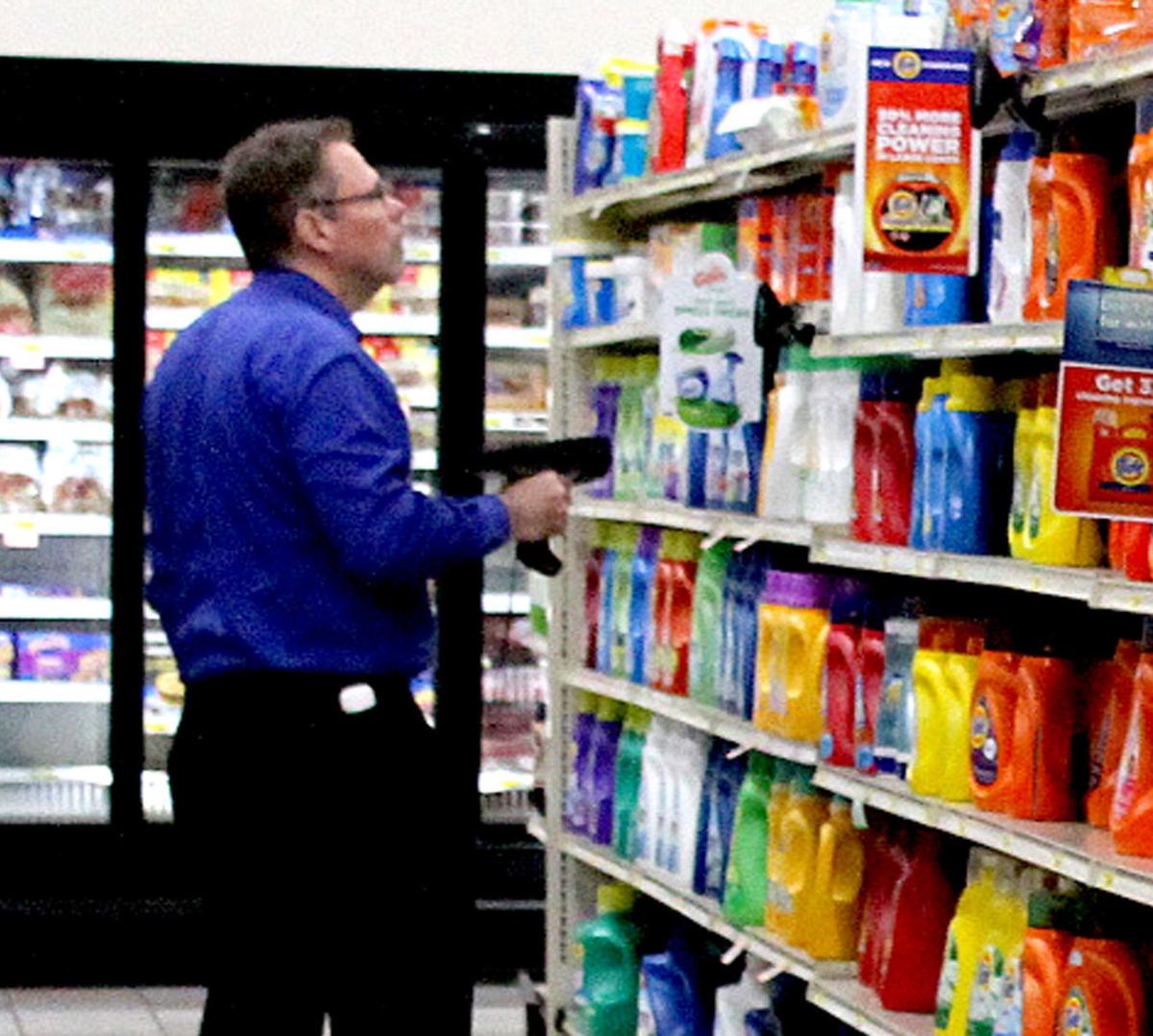 Daryl Schoenfeld, owner of Beaver Dam Piggly Wiggly, works in the cleaning product aisle of the grocery store Thursday afternoon. Due to high demand, the store is limiting customer purchases to two cleaning products per visit at this time.

Two local grocery stores are offering a special shopping time for customers who are more at risk of the spread of COVID-19.

Beaver Dam Piggly Wiggly, 810 Park Ave., and Rechek’s Food Pride, 609 N. Spring St., are designating the 7 to 8 a.m. hour as a time for seniors and others at risk to use the grocery stores.

Rechek’s owner Brett Rechek said no one will be kicked out because there is no way they would know from looking at a person what they are dealing with when they enter the store.

“We are just kindly asking people leave that hour for senior citizens and others at risk,” Rechek said.

Piggly Wiggly owners Daryl and Brenda Schoenfeld agreed that no one will be turned away and ask that people be respectful of one another.

“It’s a feel-good idea to let our elderly people come in early because we’re most concerned about their safety,” said Daryl Schoenfeld.

The grocery stores have stayed busy since fears over contracting the COVID-19 virus began, and Rechek said the crowds compare to those who come in during the Christmas season.

“It has been hectic, but the people have been really good,” Reckek said. “We haven’t had any unruly customers.”

He said his staff has been incredible with keeping things on task at the store with very limited overtime due to students having off from school.

Brenda Schoenfeld said it’s been a crazy week and she’s thankful for the patience of customers and employees alike.

“There have been some long lines but we’re doing what we can to keep people safe and get them out of here as fast as we can,” she said.

Rechek said he has been told customers should not bring their own bags into the store because of cross contamination.

There are many other extra steps both stores are doing to make shopping a safe experience. Every day they are advising customers to keep a social distance between each other, cashiers are sanitizing their hands between customers and all staff are washing their hands several times per shift.

“We sanitize throughout the day with a thorough cleaning at night,” Rechek said.

Of course there has been some issues with keeping toilet paper on the shelves and he has created a limit of two packs to help people who might need it to be able to purchase toilet paper as well.

“We won’t be letting people return toilet paper after this is over,” Rechek said.

Piggly Wiggly is currently stocked with toilet paper, but has limited the purchase of some of its cleaning supplies, such as hand sanitizers, disinfectant wipes and sprays “They’re in high demand and we’re having difficulty getting them in. Our warehouse is overwhelmed and the trucks are coming in very late, but they are coming,” said Brenda.

Following recently released health guidelines, the self-service areas of both stores were shut down, which includes their salad bars and individual donut selection.

The owners said while there may be things missing from the shelves right now, there are plenty of food options.

“The one thing that sets this store apart from others is it is an independent store, and we have multiple suppliers and deliveries,” Rechek said.

Rechek’s Food Pride gets a truckload of fresh produce every day, Rechek said and meat delivered every day except Sundays from the six produce vendors and 11 meat vendors.

“We are doing everything in our power to keep customers safe and keep food on people’s table,” Rechek said.

Piggly Wiggly does offer a delivery service called Instacart for those who don’t want to risk coming out of their homes right now. It’s available by visiting the website shopthepig.com.

“We encourage people to use it and not to visit the store unless you absolutely need to,” said Brenda. “We know that there’s nothing for anybody to do right now and social isolation is not healthy, but we have to do what’s necessary to keep everyone safe.”

The store owners acknowledged the importance of community during uncertain times.

“We are asking people to take what you need, but leave some for others,” said Rechek.

WAUPUN – An employee of Waupun Correctional Institution tested positive for COVID-19, according to an email the warden of the institution sent…

Funeral homes are having to adapt or postpone services during the coronavirus pandemic in order to safely care for families.

Volunteers contribute to comfort of patients

Jeremy Pogorelec, an employee at Rechek's Food Pride, uses hand sanitizer in between customers while working as a cashier at the store. It is one the additional precautions taken in an attempt to slow down the spread of COVID-19.

Daryl Schoenfeld, owner of Beaver Dam Piggly Wiggly, works in the cleaning product aisle of the grocery store Thursday afternoon. Due to high demand, the store is limiting customer purchases to two cleaning products per visit at this time.