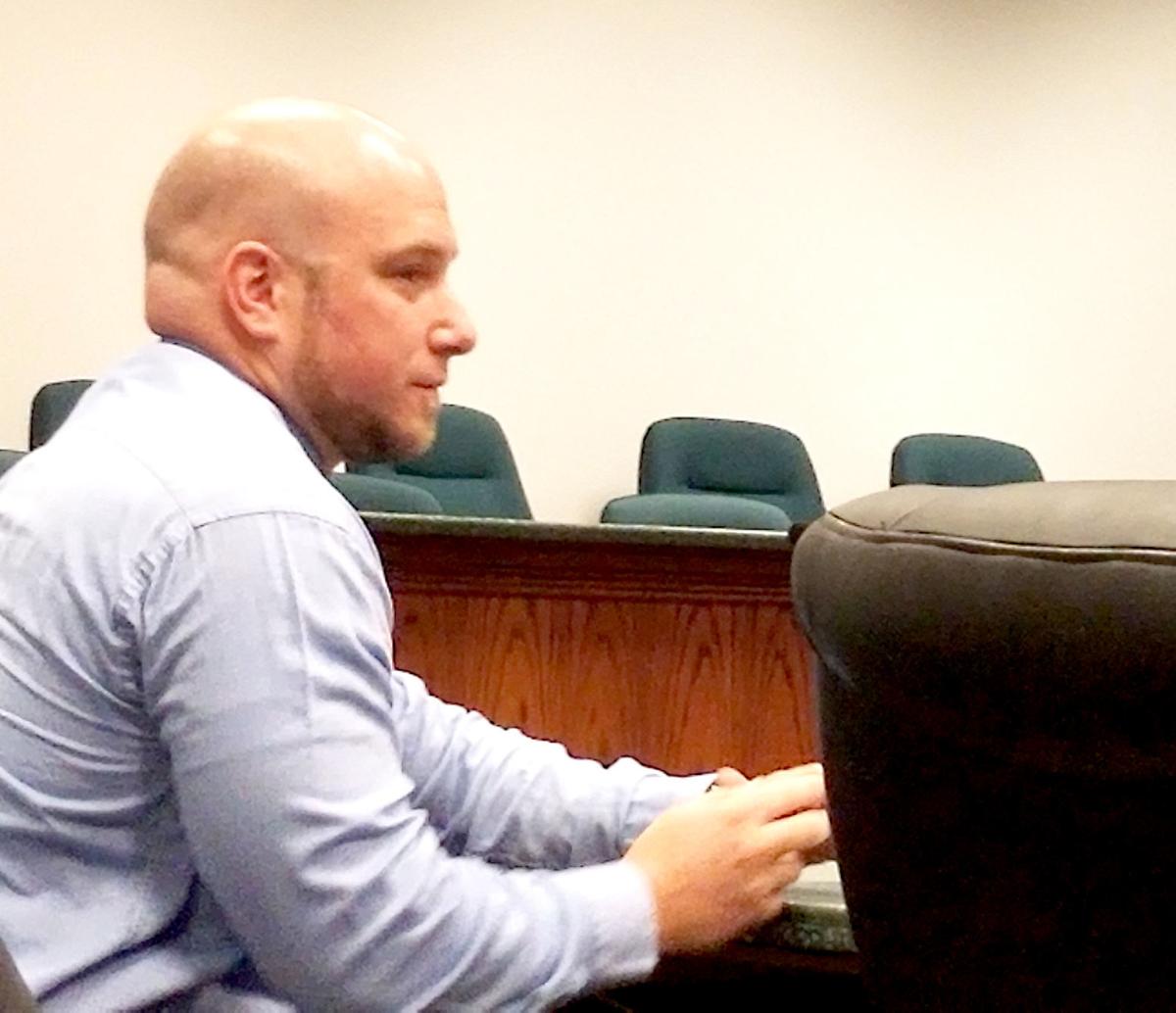 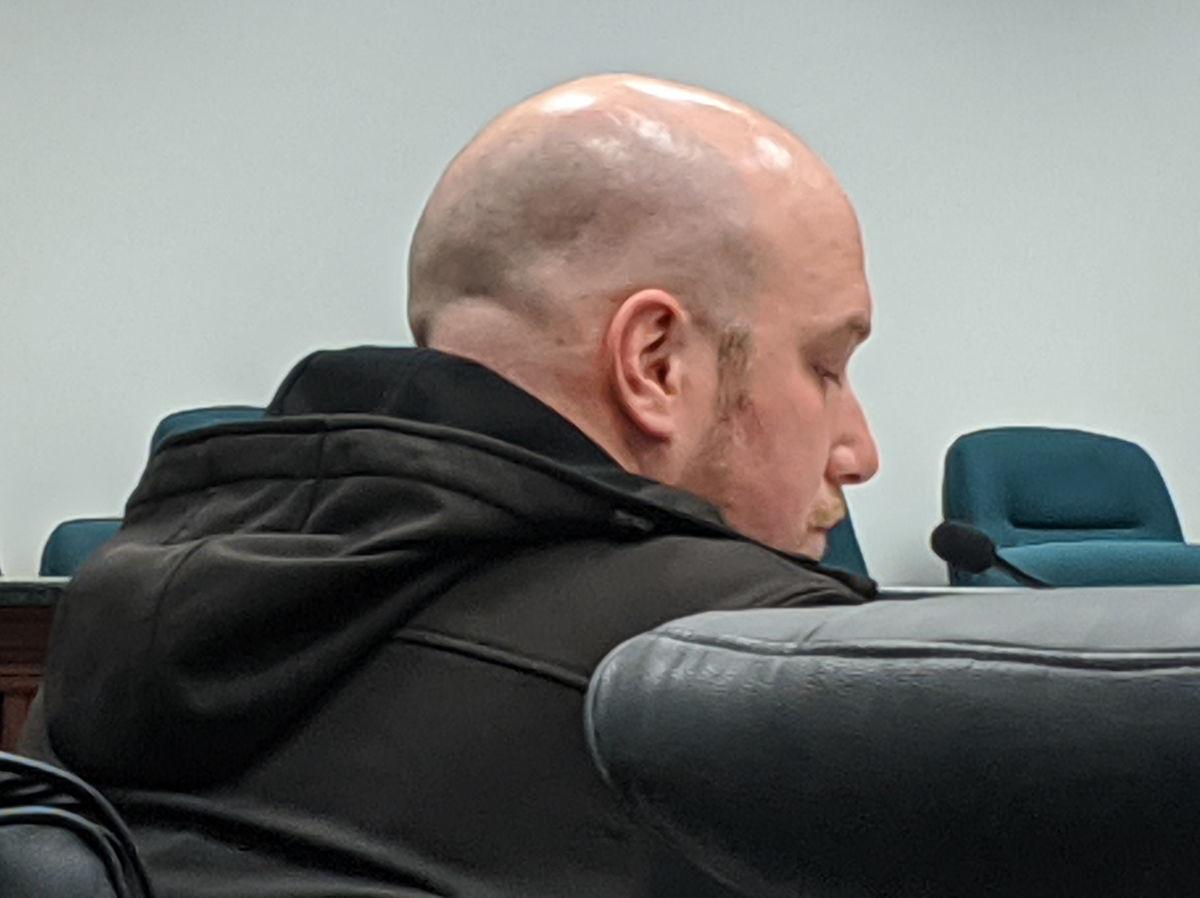 Mark Forster reads a court document before entering guilty pleas to three counts of misconduct in office on Tuesday. The former Mayville police officer will be sentenced in April. Forster resigned from the Mayville Police Department following an internal investigation by the department. Two community members claimed Forster had a relationship with a 17-year-old girl.

JUNEAU – Dodge County Circuit Court Judge Brian Pfitzinger knew he was sentencing a former police officer during a very trying time in U.S. history Tuesday, but said Mark Forster was being judged as an individual using the same criteria as anyone else who is sentenced in his courtroom.

“When the court analyzes cases, it needs to look at all the factors,” Pfitzinger said. “It doesn’t matter if you are a former police officer, employed in another profession or not employed at all.”

Forster, 31, was found guilty of three counts of misconduct in office in January after entering into a plea agreement with the Wisconsin Attorney General’s Office. Three additional charges were dismissed, but read into the court record.

Pfitzinger withheld sentencing and placed Forster on five years of probation on Monday. As conditions of his probation, Forster was given a nine-month jail sentence. In addition, he must have a sex offender assessment. He may not have contact with the victims. He may not hold a position of authority and he may not possess a firearm.

According to the criminal complaint, Forster resigned from the Mayville Police Department following an internal investigation by the department. Two community members claimed Forster had a relationship with a 17-year-old girl.

Shelly Rusch appeared for the state and said the plea agreement was based on the probation sentence. However she did think time in jail would be appropriate.

“This wasn’t a one-time decision,’ Rusch said. “He did this over and over and whenever he felt like it.”

Rusch said that Forster also did not appear to have any remorse for what he had done and that he victimized other police officers.

“All good officers suffer when one bad one misuses the integrity and trust,” Rusch said.

Steinle said that Forster never denied anything and agreed to the plea agreement because he did not want to make the victims take the stand during a trial.

“I don’t deny sometimes he sounds like he is denying responsibility,” Steinle said. “He does not show emotion very well.”

Forster spoke to the court and offered apologies for his actions.

“I learn from my mistakes and this was a huge mistake,” he said.

The administrative assistant told the DCI special agent that she also had a sexual relationship with Forster in the first six months of 2015 when she was 20. She said the incidents happened during ride-alongs while Forster was on duty.

The teenage girl contacted Vossekuil in April 2018. The girl said she had denied having a physical relationship when initially questioned at age 17 because she was trying to protect Forster. However, she said she later realized his actions were inappropriate. The girl said when she found out that Forster was suing Mayville, which he has lost, to get his job back, she became concerned there would be more victims.

Rusch said that after Forster was fired that he would have most likely had gotten away with the crime if he had not sued the city for $175,000 seeking to regain his job.

A Reedsburg man was arrested after allegedly pointing a handgun at several people outside a local tavern while appearing to be intoxicated.

A La Valle man was arrested for his third drunken driving offense during a traffic stop in West Baraboo.

Mark Forster reads a court document before entering guilty pleas to three counts of misconduct in office on Tuesday. The former Mayville police officer will be sentenced in April. Forster resigned from the Mayville Police Department following an internal investigation by the department. Two community members claimed Forster had a relationship with a 17-year-old girl. 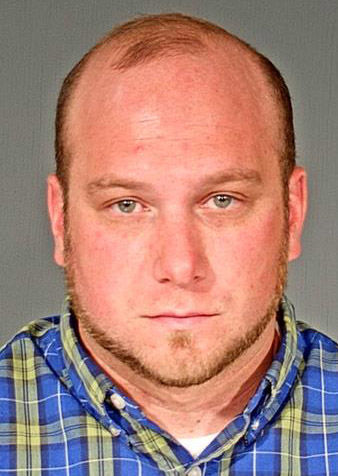