Packers vs. 49ers: Follow updates from the NFC Championship game

Body cameras for police have emerged over the past few years as the next standard tool in an officer’s arsenal alongside the gun and the badge.

The conversation around body cams often centers on big cities and how to hold officers more accountable in the face of broken trust with their neighborhoods and residents. Smaller communities and departments are often lost in the discussion even as they continue to add them to their arsenals or take a look at doing so.

Agencies that have embraced the cameras say they are working well, while those going without have concerns about cost and privacy.

The Dodge County Sheriff's Office has been using body cameras for more than a year after receiving a $79,500 grant for them around the time the office was looking to replace its in-car recording systems. The recording devices for the cars and the body cameras deputies wear are linked and turn on when deputies activate the vehicle's flashing lights.

"The reason I bought it wasn’t because of a lot of the conversation out there in the bigger cities about 'cops need to have body cams,'" said Sheriff Dale Schmidt, whose county has a population of 88,000. "I bought it strictly because of evidence. It is a great tool to have out there on the street."

Schmidt said he wears his own camera when he's out and he's noticed it keeps interactions between the deputies and the public more professional when they remember they are on camera.

A 2018 phone survey commissioned by the Wisconsin Professional Police Association found that 94% of state residents favored body cams for officers.

"The feedback I’ve gotten is it’s made their jobs easier," he said. "It’s made it easier for them to document things they’re seeing out there and it corroborates what they’re saying in their reports. I’ve heard nothing but positive feedback."

Schmidt said the cameras have allowed deputies in minutes to easily refute complaints from the public that could have otherwise taken time and resources to review. He said he doesn't receive many public records requests for the video, which is an option for anyone wishing to review footage. He said he mostly receives request for videos to use in court cases.

"Believe it or not, most often when I’m getting these complaints from the public, they’re not legitimate," he said. "There are some legitimate ones, I certainly can’t say that we don’t have those, but it think it’s been a really good thing for our agency and nothing but positive things have come from it beyond attorneys having more video to review in courts cases."

While Dodge County has body cams for deputies, many of its neighboring agencies have not taken the step as they continue to review the concept. According to a report issued by the U.S. Department of Justice last fall, 47% of agencies nationwide had body cams for officers in 2016, while 69% had dashboard cameras and 38% had personal audio recorders for officers. 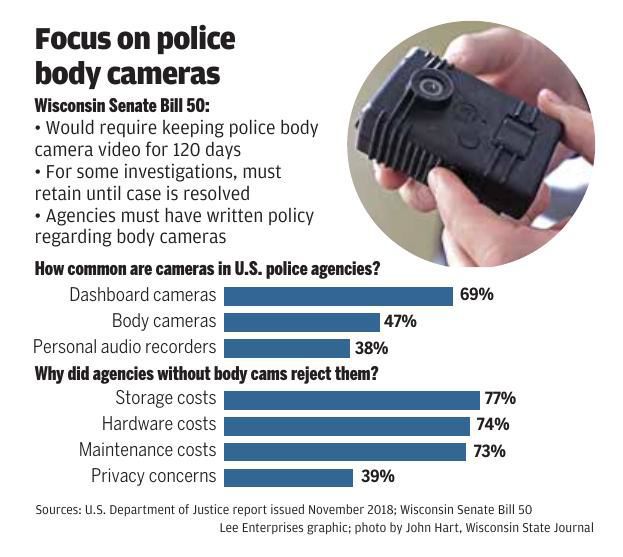 According to the Associated Press, the manufacturer Axon told the association that about 60 agencies in Wisconsin use the cameras out of about 500 total.

Mayville police used to have some body cams, Chief Jim Ketchem said, but they didn't work very well, and the department did not keep that part of its overall camera system when the equipment was replaced. He said the department is considering a return to body cam use, but he hasn't found the money in the budget quite yet.

Brian Drumm, the chief of police in the unincorporated town of Beaver Dam, said the town does not currently have body cams and that officials are looking at getting them when the time comes to replace equipment.

"Right now it's the cost of storage that's made it prohibitive," he said.

Often, it's not the cameras themselves that come with sticker shock, but rather the cost of storage space for the reams of video picked up by the cameras.

Mark Schauf, the police chief in Baraboo, which has used body cams for at least three years, said that it's also expensive to license the proprietary software that stores and plays back the video. Baraboo also uses a multi-terabyte server that holds video and also has a system linked to squad car recorders.

"A lot of people think its going to be this tool that makes officers change their behaviors," he said. "The officers are doing the right thing. It's just recording what's going on so its removes doubt."

Schmidt said Dodge County already had storage on-hand for the video footage collected, so that wasn't as much of a concern, but that it may need to be upgraded in the future.

Unlike Dodge County, Columbia County does not use body cams. Roger Brandner, the sheriff of Columbia County, said discussions are ongoing about how to incorporate them into the county. Deputies do have a system where squad car cameras and uniform microphones are combined.

Brandner said he sees body cameras as a potential valuable tool that would help eliminate complaints and build cases in court.

He said the county is testing using body cameras in the jail to see how the technology works and how well they retain video.

The Portage Police Department has also made investments into using body cams.

Schmidt said that he knows of many agencies that are waiting to see if the state Legislature passes any laws regarding body cams before making their next move.

State legislators, after meeting in a subcommittee of the Joint Legislative Council Committee over the past year or so, have put forth Senate Bill 50, that would formally standardize requirements for departments using the cameras.

The main requirements would be that video would need to be retained for at least 120 days. For video that could be used in court proceedings and major investigations, it would need to be retained until the case is resolved. For example, if someone is investigated for domestic assault and then charged, the district attorney would want any video footage from a police response to help build the case. Defense attorneys would want to use video footage if it could help prove that their clients are not guilty.

Agencies would need to form their own written policy for body cam use.

The bill would also put into law language that allows agencies to not release video as public records to protect the privacy of an individual the department believes should be protected, such as a minor or the victim of a crime, a decision one could challenge under open records law.

Beaver Dam police officers were called Oct. 26 to a home on Walnut Street over a domestic disturbance.

According to a criminal complaint, Officer Brian Linzenmeyer entered the home, where he saw a man and a woman physically fighting, and the woman was trying to get away from the man, later identified as Richard Henke.

One investigating officer who also entered the home reported that Henke's eyes were "black and evil," and that his eyes made him look like he was very upset and in a rage before giving a blank stare to Linzenmeyer.

The report says that, at one point, it appeared Henke reached to his side where a firearm could be kept, and that he later restrained the woman by the back of the neck, her hair or around her shoulder as she screamed and tried to get away.

Later, the document says, Linzenmeyer followed Henke into a bedroom, and Henke soon pointed a rifle directly at the officer as he looked at Linzenmeyer again with "evil" eyes. As Henke continued to raise his rifle at the officer, Linzenmeyer shot the man with his handgun, investigating officers reported.

Linzenmeyer was put on administrative leave after the shooting for over two months before returning and easing back into work. The Dodge County District Attorney's office justified in his use of a firearm following an investigation by the Dodge County Sheriff's Office. Investigating officers writing in the criminal complaint speak for Linzenmeyer and what he saw.

In cases like these, advocates for body cameras would point to the tool as, at least, a way to back up what officers are saying to make sure that such shootings are justified.

The Beaver Dam Police Department does not use body cams, however, so the court has to rely on the word of the people who were at the scene there as it moves forward with the criminal case against Henke.

Beaver Dam Police Chief John Kreuziger said the department has been thinking about getting the cameras for a few years but hasn't made the leap.

"It would corroborate what the officer is already saying [about an incident]. If the officer is saying that, we have video and audio to back that up and make people understand what the officer was seeing or saying," he said. "But we don’t want people to get the unrealistic expectation that cameras are the answer and that they can see and cover everything."

Kreuziger said that he still has concerns about using body cameras and that he's waiting for technology and case law to catch up he seeks more answers to his questions about them. Storage is also a concern for him. The department currently uses squad cameras and microphones intended for use during traffic stops.

"Privacy issues is one of the huge concerns I have," he said. "We do take sexual assaults. We do see pictures of nudity and we do deal with private issues between private people that will be recorded, and we get into those issues of the recording itself and whether that should be released to the public."

He said he also wonders about their consistent use in stressful situations and that the cameras still don't completely capture everything an officer would see with their eyes during a call, let alone what the officer is thinking in the moment.

"It’s not the answer to everything," he said. "If I do get cameras, I’ll be getting them to protect our officers."

The efforts of three Portage Police officers, aided by a Wisconsin State Trooper and a Good Samaritan, were recognized for earlier this month …

Beaver Dam will take another look at getting body cameras for its police officers in the aftermath of a high-profile trial. 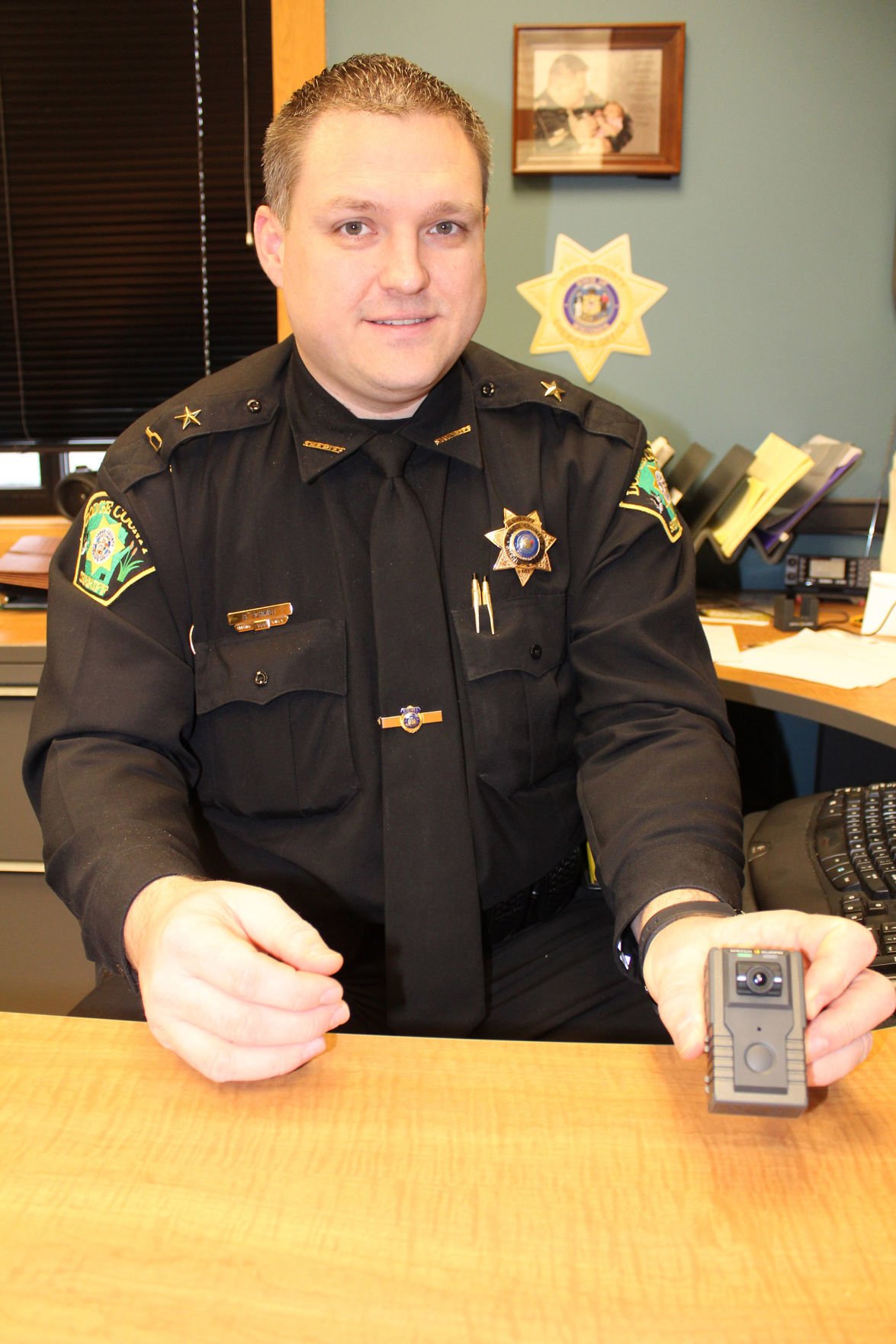 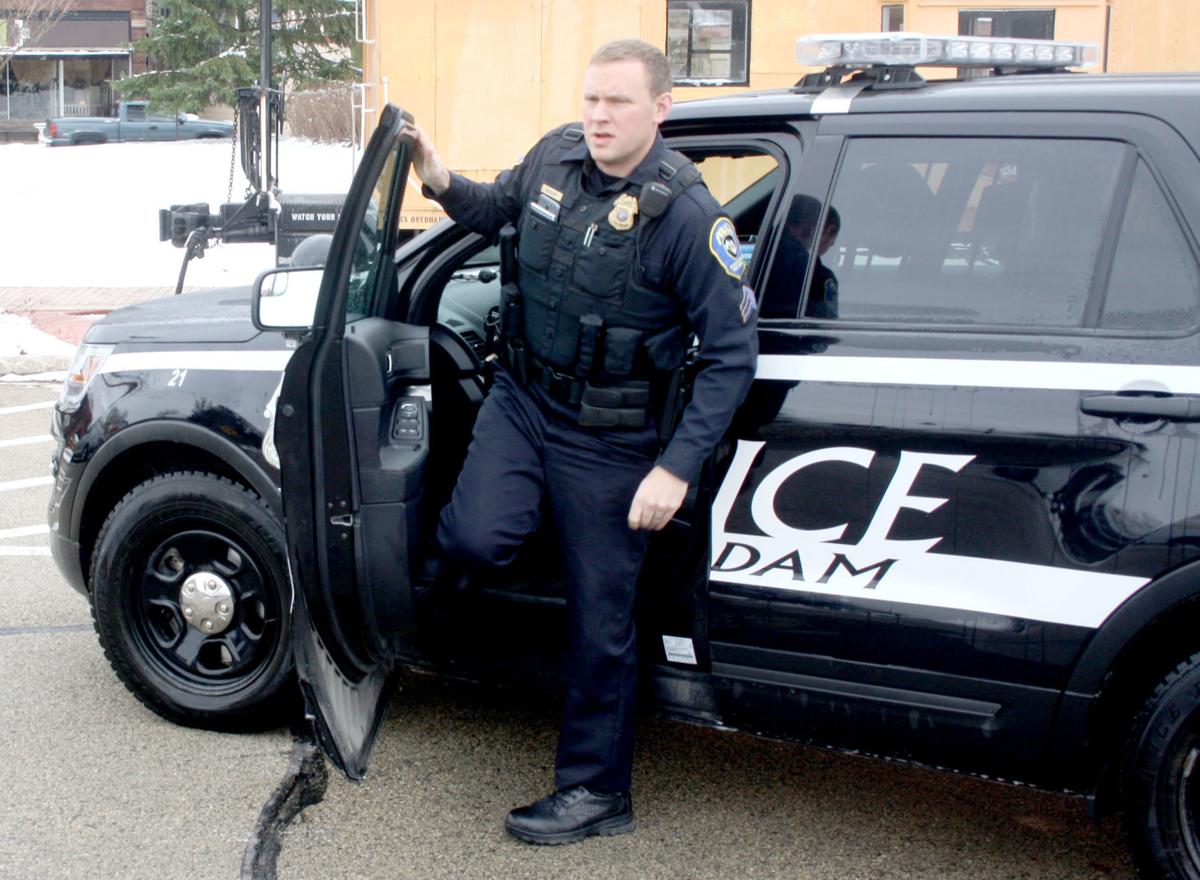 Sgt. Craig Retzlaff of Beaver Dam exits his squad car. The Beaver Dam Police Department does not use body cameras for officers, but it does have a recording system based in the squad cars, mainly for traffic stops.