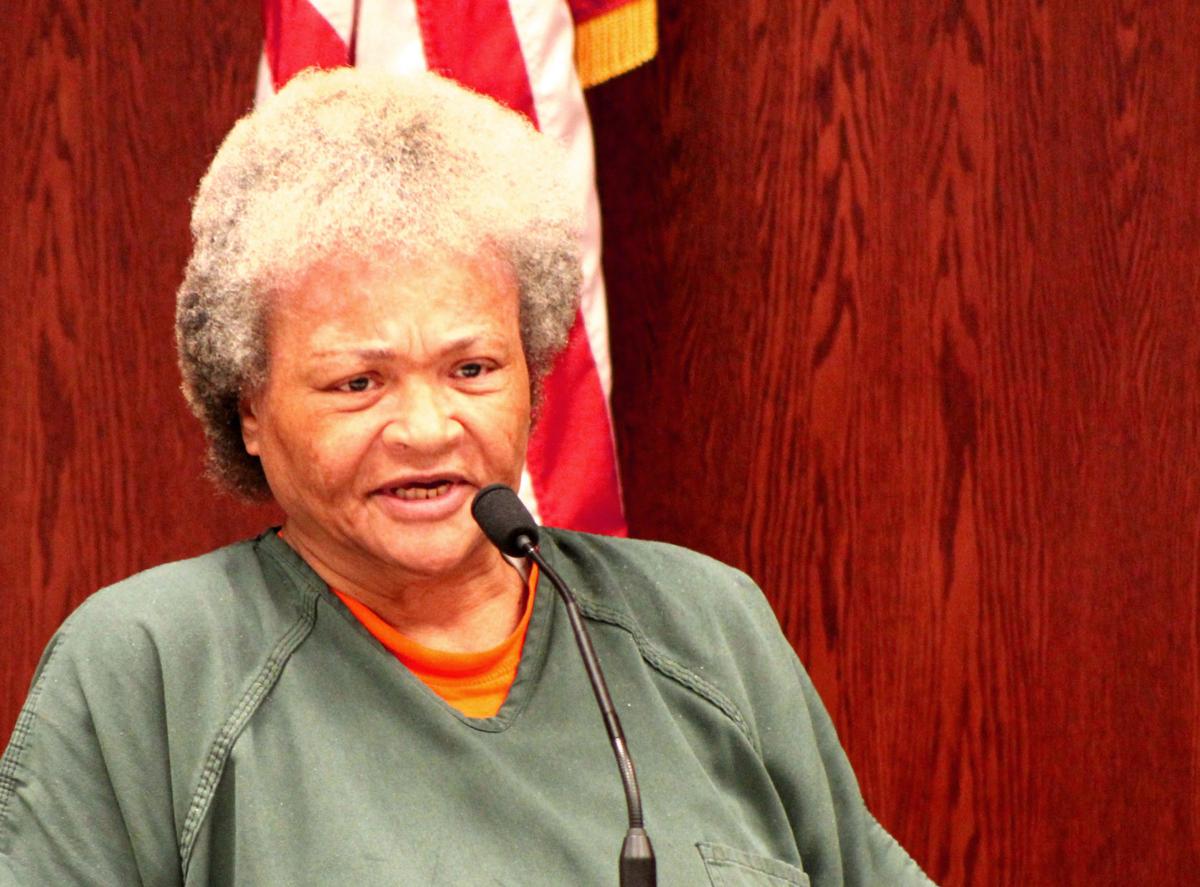 Marjorie Jones testified on Thursday during her son Laverne Ware Jr's homicide trial. Ware is accused of the fatal shooting of Sesalie Dixon, who was Jones' niece. 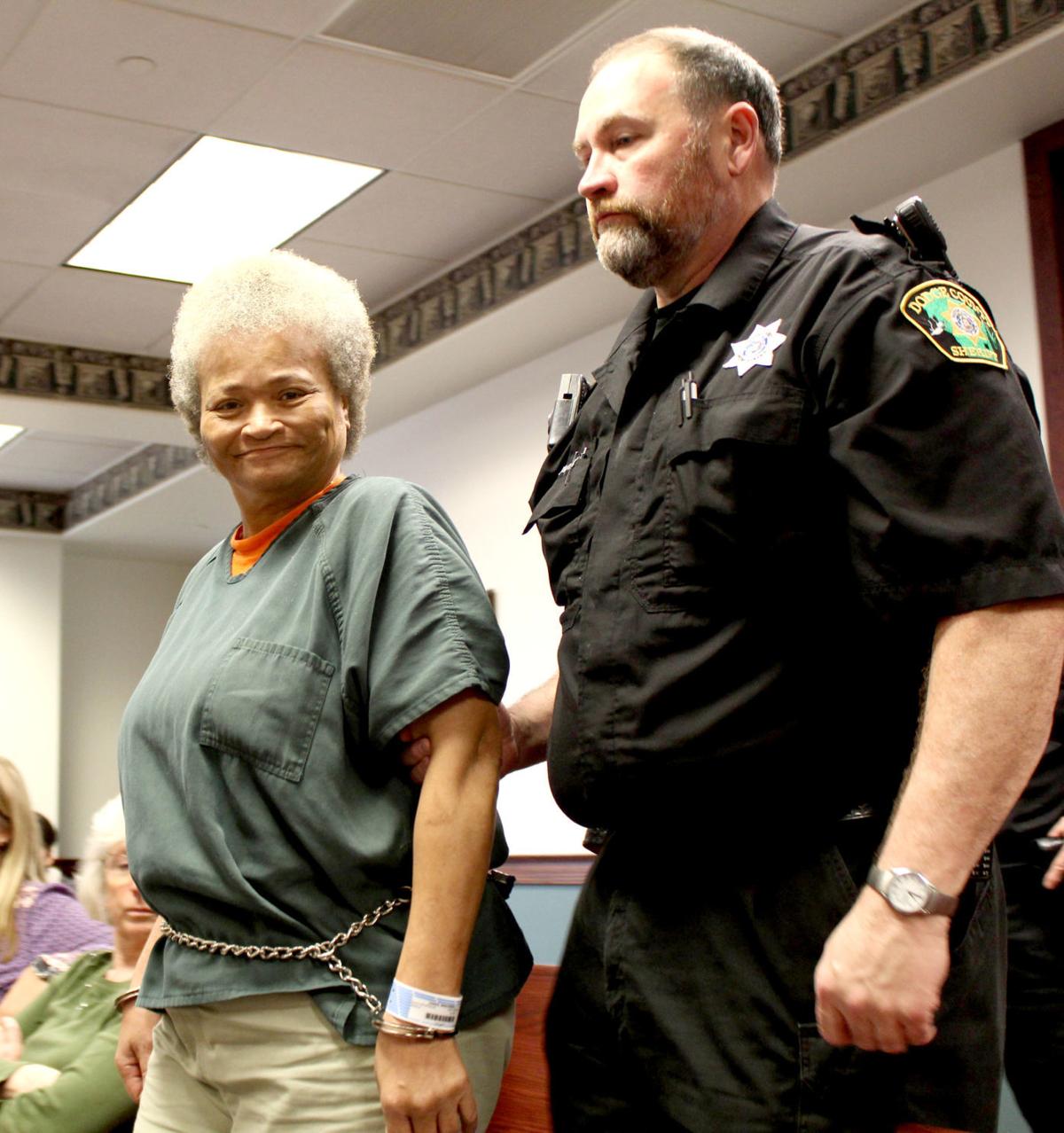 Marjorie Jones poses while being led into the courtroom by a Dodge County Jail Correctional Officer on Thursday as she's called in to testify during the first degree homicide case for her son Laverne Ware Jr.

JUNEAU – Marjorie Jones denied accusations made by a defense attorney that she was the one who had killed her niece Sesalie Dixon during the first degree homicide trial for her son Laverne Ware Jr.

Ahmad said the jury will decide if Jones lied.

In addition to the homicide charge, Ware is charged with hiding a corpse, incest and two counts of being a felon in possession of a firearm.

Dixon’s body was found Dec. 4, 2016, in the passenger seat of a pickup truck owned by Ware, parked in the garage of a Fox Lake home he owned and where Jones resided. An autopsy revealed that Dixon, 27, died of three gunshots to the head.

Ahmad asked Jones about her relationship with Ware’s father. She said she met him when she was 16 and he was 32. She had worked at his bar in Milwaukee. Together they had two children Laverne and Jeremiah Ware. Jeremiah died of cancer when he was a child.

Ahmad asked Jones about the money that Ware Sr. had acquired and if she ever felt that she deserved the money.

Jones said she was aware Dixon was her niece and said she wasn’t aware that Ware was dating Dixon until shortly before Dixon’s death.

“At that time, you felt Stanley put his daughter up to it?” Ahmad asked.

Ahmad asked Jones why she was concerned.

Jones said her brother denied Dixon was his daughter, but she confronted them when they saw her.

“Did Sesalie love your son,” Ahmad asked. “Didn’t you feel it was just about the money.”

“I believe she loved him,” Jones said. “Being my niece, she is like me. I would have been out for the money as well.”

Ahmad asked Jones about objects Ware had bought for Dixon and asked about a diamond ring and fur coat.

Jones said that Ware bought Dixon a wedding dress before the diamond ring and Dixon didn’t own the fur coat. It belonged to Jones, and she said she bought it herself.

Jones said that her recollection of what happened around Dixon’s death was hazy due to the amount of drugs, legal and illegal, that she was on at the time. She also said she didn’t believe in technology and wasn’t sure if the recordings of her voice were fraudulent.

“Whoever she is, she sounds like a very angry lady doesn’t she?” Jones said.

Klomberg played audio clips from when Jones was first taken into custody and questioned later at the jail and she implicated Ware in causing the death of Dixon.

Jones said she could not recall those statements.

Jones said Thursday that she recalled being left in the home alone the night of Dec. 3, 2016.

“(Dixon) was there some period of night and somebody called for her and she left,” Jones said.

Jones admitted to some fights with Dixon, but said she never threatened to kill her.

“You threatened to kill her several times,” Ahmad said.

Jones denied handling the murder weapon on purpose and said that she accidentally pulled the gun from under the couch when she was attempting to retrieve her cigarettes. She said she did not own the guns and had nothing to do with them.

“They charged me for it for me anyway, so I’m doing my time on that,” said Jones, who was sentenced to six years in prison last March after she was convicted of harboring a felon and being a felon in possession of a firearm.

Jones was allowed to speak to Ware when she was walking by him at one point and told him that she loved him. She also said a statement on the stand about her feelings for her son.

“I love my son just like God loves us,” Jones said.

Ware will have an opportunity to take the stand on Friday morning. He also could decide against testifying in his own defense.

Marjorie Jones to take the stand on Thursday

JUNEAU — Marjorie Jones will testify for the defense today in the murder trial of her son, Laverne Ware Jr., who is on trial in the death of S…

JUNEAU — Teresita Johnson had planned on taking her daughter to her home state for a special birthday trip.

Federal inmate testifies that Ware told him about the homicide

JUNEAU — A Beaver Dam man who said he was friends with Fox Lake homicide suspect Laverne Ware Jr. testified Friday that Ware claimed to be “a …

JUNEAU — A State Crime Laboratory expert testified on Thursday during the first-degree homicide trial against Laverne Ware Jr. about how he de…

JUNEAU — A homicide case that began when a body was found in Fox Lake in 2016 is scheduled to begin its potential final chapter Monday, with j…

JUNEAU – Laverne Ware Jr. was found guilty of all five counts against him including first degree homicide.

Marjorie Jones testified on Thursday during her son Laverne Ware Jr's homicide trial. Ware is accused of the fatal shooting of Sesalie Dixon, who was Jones' niece.

Marjorie Jones poses while being led into the courtroom by a Dodge County Jail Correctional Officer on Thursday as she's called in to testify during the first degree homicide case for her son Laverne Ware Jr.