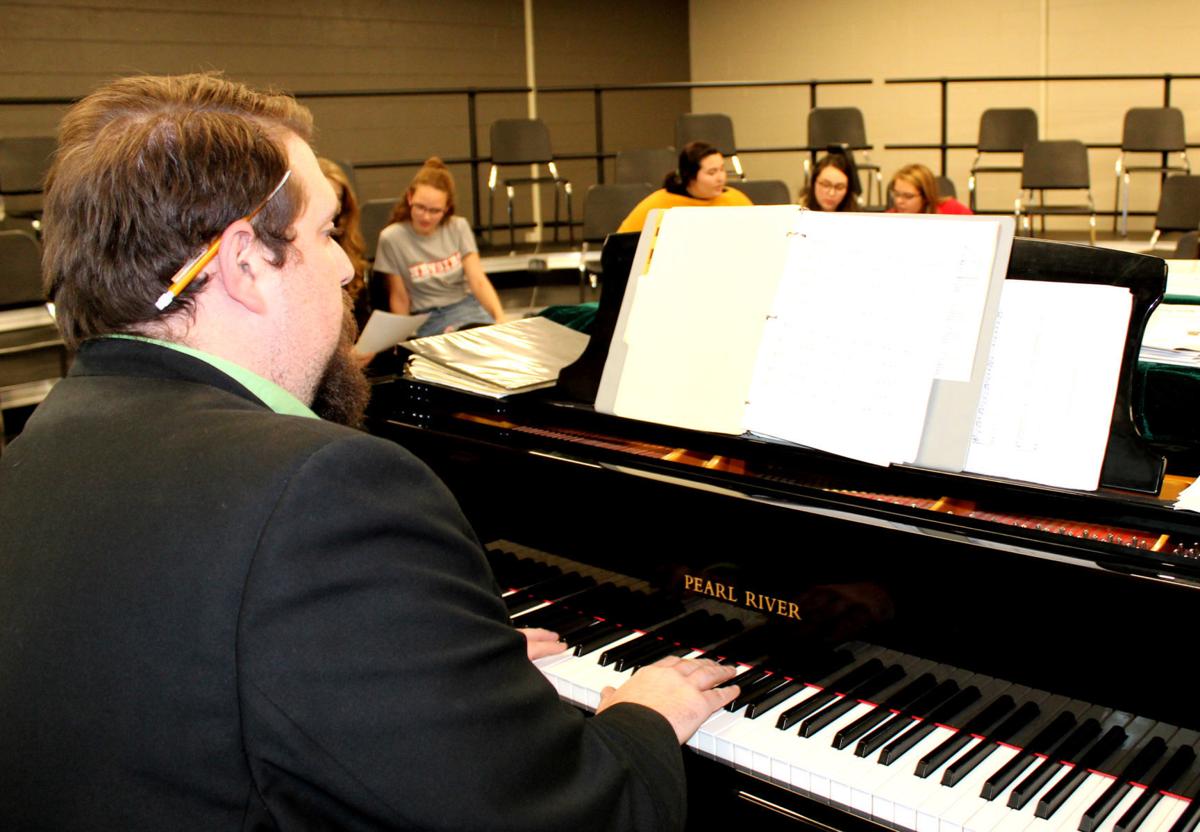 Good Old Acapella is the new name for the former SWAZZ group at Beaver Dam High School. The name officially changed last week with the group's first performance under the new name occurring at the school Sunday. Director Mark Lefeber accompanying the group during a practice on Thursday. 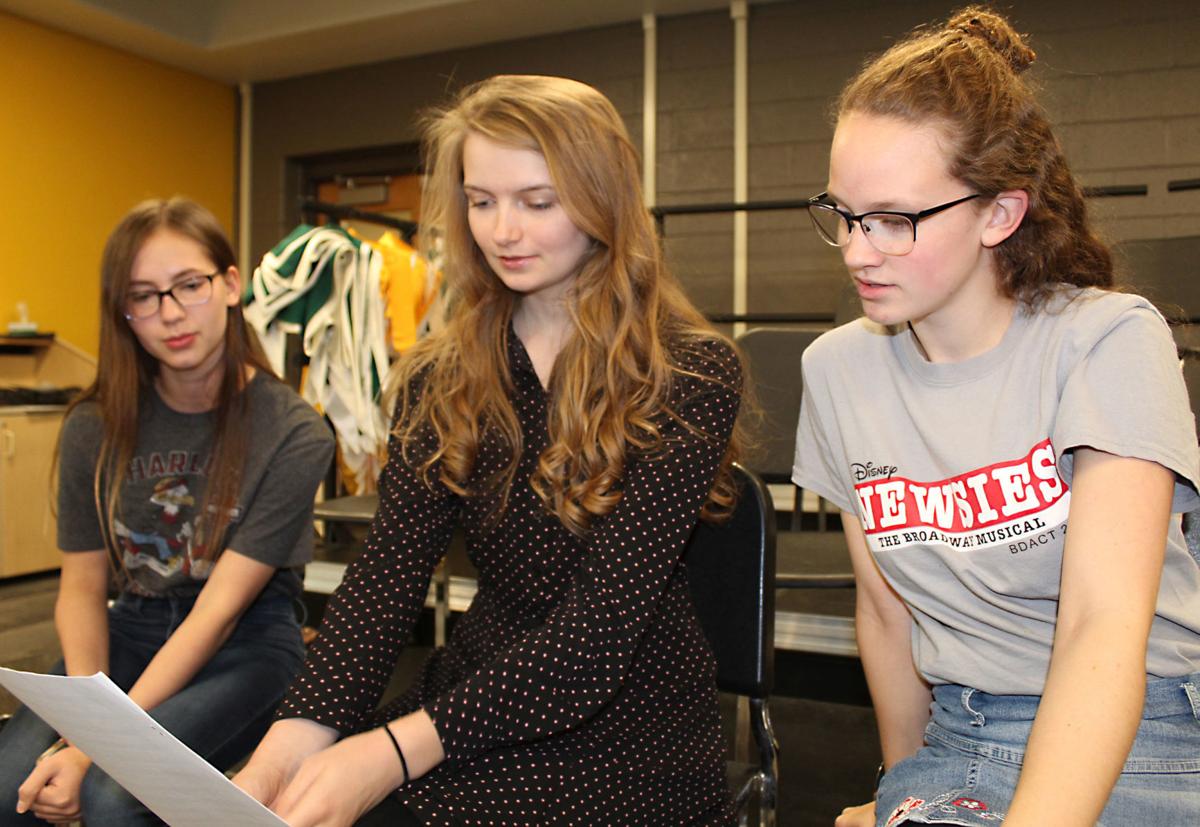 From left are Abby Davidson, Ashley Hale and Linnea Lerwick practicing to perform with the newly named Beaver Dam High School Good Old Acapella. The group, which was formerly known as SWAZZ, will perform for the first time under the new name on Sunday.

The voices still are the sweetest in Beaver Dam, but the Beaver Dam High School choir department has changed the name of its a cappella group.

“The elite mixed a cappella group SWAZZ will be taking on a new, but familiar name: Good Old Acapella,” director Mark Lefeber said.

For several years, the group has closed its spring concerts with “Good Old Acapella.” The song was first performed by The Persuasions.

This isn’t the first time that the group has undergone a name change, Lefeber said.

“In digging through old yearbooks dating back to 1927, the group appeared to have begun by simply being called Glee Club,” Lefeber said. “Other names pop up throughout the years such as Madrigals, Choristers, and Swing Choir. Toward the end of director Tom Radke’s career, who taught choir at BDHS from 1954-1992, the elite extracurricular group was a full-time swing choir called The New Media Singers.”

Former BDHS choir director Marcia Paul named the group SWAZZ after she took over the director position in 1992, which it has been called ever since.

“The group evolved to perform more music a cappella, but continued performing one set of swing choir music per year, the January performance when SWAZZ opened for The Wisconsin Singers, Lefeber said. “The group is now working full time on a cappella music, and the full show choir choreography is more in line with what most a cappella groups are doing in competition, such as the upcoming International Championship of High School A Cappella, at which the group hopes to perform.”

Good Old Acapella will integrate things from the past generations into the new sound, member Linnea Lerwick said.

“Though the name of the ensemble is changing, virtually nothing else is,” Lefeber said. “The group will continue to perform frequently around the community during the winter months, including singing ‘Santa Claus is Coming to Town’ every year.”

“We also hope the alumni does not feel excluded,” member Annie Friedl said.

“If any alumni of SWAZZ, The New Media Singers, or any of the previous iterations of the group are interested, we’d love to have all available alumni join us on stage in the spring of 2020 for our concert, and join us on stage for our signature song ‘Good Old Acapella,’” Lefeber said.

The group will open Jan. 25 for the Wisconsin Singers at the high school.

“We feel the name matches more what we do now,” Lefeber said. “We aren’t as focused on swing and jazz any more. The name change also nods to and respects the history of our group.”

He also joked that he looks forward to people always being able to pronounce the name on sight.

“I consulted with some of my colleagues after the decision was made and one pointed out how no one will have any questions who or what we are...we’re Good Old Acapella.”

As always the group is still available to perform at events and gatherings this winter. Anyone interested can contact, Lefeber at the high school.

6 candidates vie for 3 seats on Pardeeville School Board

Six candidates are competing for three seats on the Pardeeville School Board in the April 7 election.

The Baraboo School District is developing daily instructional plans for families to use at home while schools remain closed, but it won’t requ…

The Portage Community School District is doing everything it can to stay connected to students and their families during the indefinite, state…

Students in the Beaver Dam Unified School District went back to work Monday, but did not rot return to the school buildings that shut down in …

The School District of Reedsburg’s food service program will still operate under Gov. Tony Evers' Safer at Home order but the dates have chang…

Good Old Acapella is the new name for the former SWAZZ group at Beaver Dam High School. The name officially changed last week with the group's first performance under the new name occurring at the school Sunday. Director Mark Lefeber accompanying the group during a practice on Thursday.

From left are Abby Davidson, Ashley Hale and Linnea Lerwick practicing to perform with the newly named Beaver Dam High School Good Old Acapella. The group, which was formerly known as SWAZZ, will perform for the first time under the new name on Sunday.