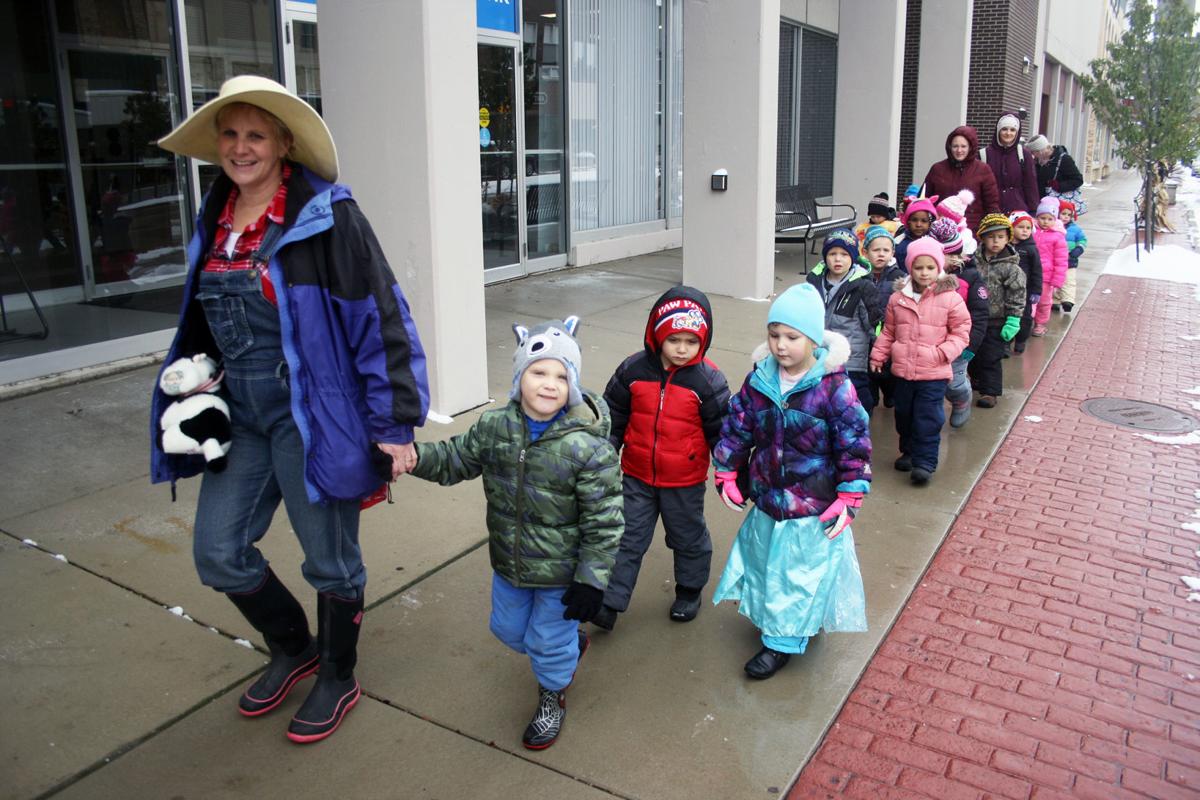 Renae Henning walks with her early childhood care class down Front Street in Beaver Dam on Halloween. The children were out for their traditional walk in costume despite the unusual snowfall. 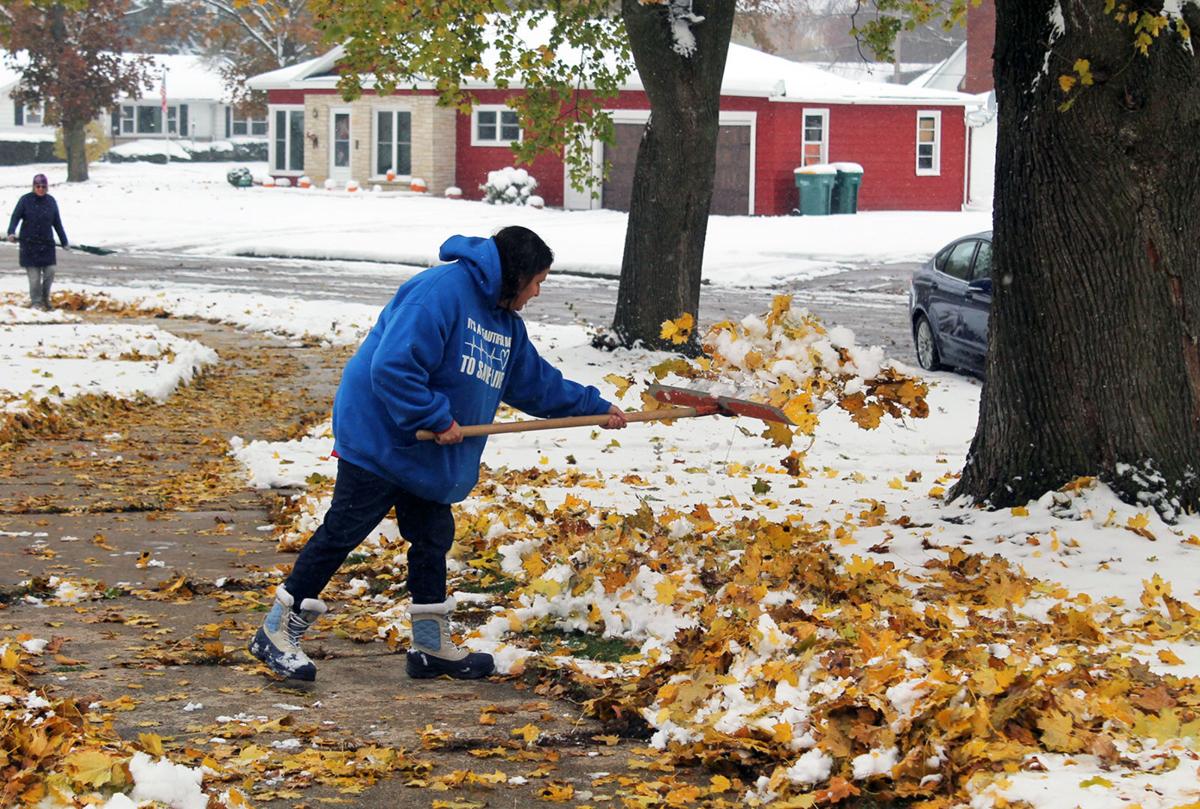 Denisa Zuelsdorf shovels a mixture of snow and autumn leaves off a Sloan Circle sidewalk in Beaver Dam Thursday. It was the second measureable snowfall this week as the month of October comes to an end. 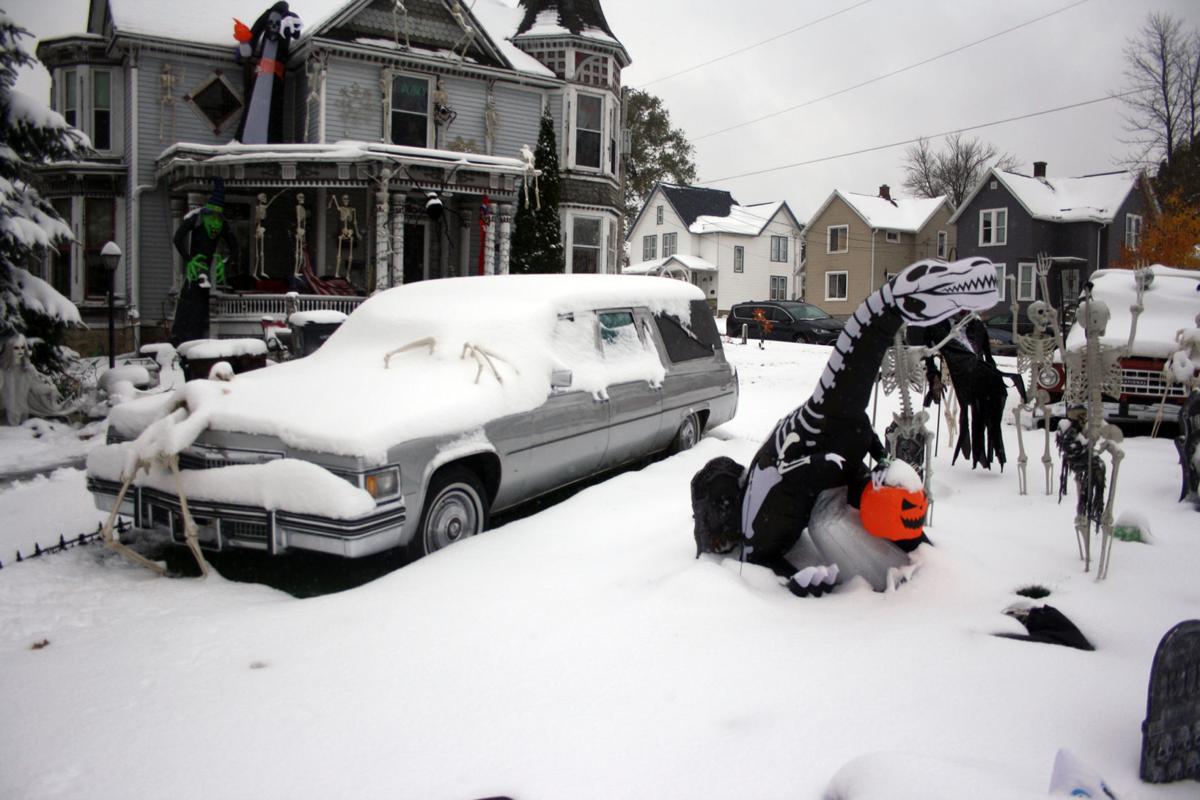 Decorations at Jeff Omen's house on North Center Street in Beaver Dam are covered in snow on Halloween.

Fall leaves were replaced by a familiar white covering Thursday morning in southern Wisconsin allowing the state to dress up as Christmas for Halloween.

"The higher totals were in Dodge County," Miller said.

The closest area where historical snow falls are recorded is Madison where there was a dusting in 2014 with the previous largest snow fall of 3.2 inches in 1926.

“Having snow-covered and slippery roads in October is unusual, but not unheard of for this area,” Columbia County Sheriff Roger Brandner said.

As of late morning Thursday, Brandner said 41 traffic crashes had been reported in Columbia County including some on the interstate.

“The majority of the motorists made it this morning without any incidents or accidents,” Brandner said. “Unfortunately, there were a number of them who did not slow down and drive with caution."

State law requires motorists to slow down and drive with caution when road conditions are not ideal and there are hazardous conditions preventing them from driving at regular speeds, Brandner said.

“The first couple snowstorms of the year always seem to be the worst for drivers,” Brandner said. “This snowstorm was predicted and should not have been a surprise to anyone. Drivers need to remember that the speed limit on the roads are posted for ideal driving conditions and when you introduce snow, slush, ice and even wet roads we must significantly slow down as the vehicle’s braking and steering are adversely affected.”

Drivers can simply slow down, pay more attention and give themselves some extra time to reach their destinations, he said.

“We have not had to page out fire or EMS for any of them which is great,” Meister said. “I think the amount of forewarning helped.”

Meister echoed Brandner’s advice about leaving early enough to get to a destination and slowing down.

“Use primary roads when possible that have been plowed,” Meister said. “Slow down, four-wheel drive or all-wheel drives don’t help you stop any quicker, and leave plenty of distance between you and other vehicles. As always, wear your seat belts, headlamps on and stay off your phone so you are not distracted.”

It has been a while since a snow has happened this early in the region, Dodge County Highway Commissioner Brian Field said.

“This is hands down the earliest I can ever remember plowing snow,” Field said. “The plowing has gone well to this point. Most residents have been safe and sensible. There have been some run-offs presumably caused by traveling too fast for conditions. Our crews were prepared as the forecast was accurate which always helps. Our salt sheds are full, the trucks have been converted to winter duty mode with front plows, side wings and salt spreaders.”

One morning accident in Dodge County blamed on the weather and road conditions involved a school bus. It occurred around 7:30 a.m. on Jefferson Road in the town of Rubicon. No one on the bus was injured and a 47-year-old town of Rubicon man who was driving the other vehicle had minor injuries.

The initial investigation, according to the Dodge County Sheriff’s Office, revealed that a van driven by the man was traveling south on Jefferson Road when it came upon the school bus with lights activated during a student pickup. The van was unable to stop and collided with the back of the school bus.

"Thankfully, there were no significant injuries reported that I am aware of," Mittelstadt said. "This was about typical for the first bad road condition day of the winter season. Many people were caught off guard with the slippery conditions and likely driving faster than was appropriate."

Children in Dodge County mostly had trick-or-treating last weekend, but children in Sauk and Columbia counties were out and about Thursday evening with snow on the ground and temperatures below freezing.

“With the amount of kids that will be out today trick-or-treating we must all slow down in the villages and cities,” Brandner said. “Sometimes even traveling at 15-20 mph is too fast for these conditions. We want everyone to be safe and it is up to every one of us who are out there traveling today to make sure that happens.”

Safety tips for driving in the snow

From the Dodge County's Sheriff's Office

Early season snow fell in the area twice during this last week of October.

Renae Henning walks with her early childhood care class down Front Street in Beaver Dam on Halloween. The children were out for their traditional walk in costume despite the unusual snowfall.

Denisa Zuelsdorf shovels a mixture of snow and autumn leaves off a Sloan Circle sidewalk in Beaver Dam Thursday. It was the second measureable snowfall this week as the month of October comes to an end.

Decorations at Jeff Omen's house on North Center Street in Beaver Dam are covered in snow on Halloween.