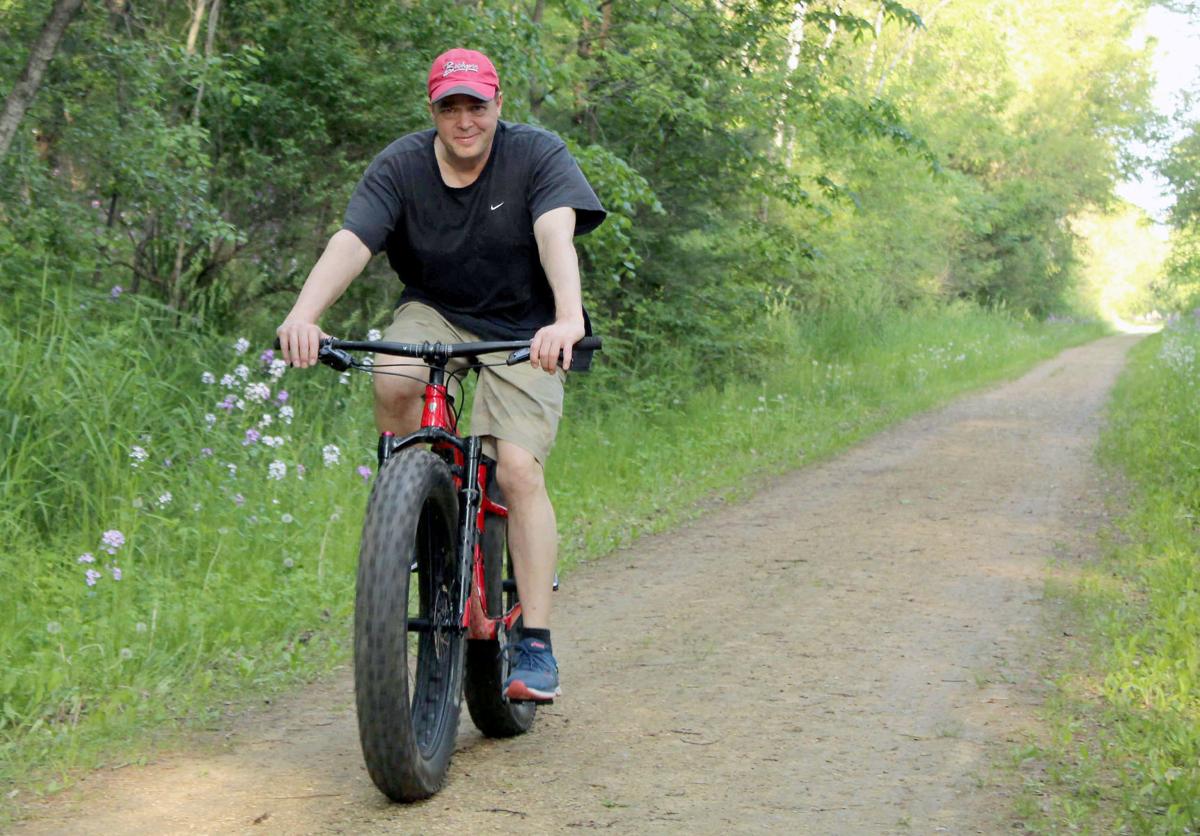 Dan Urban, of Reedsburg, rides his bike on the 400 State Trail in this June 8, Capital Newspapers Archive photo. 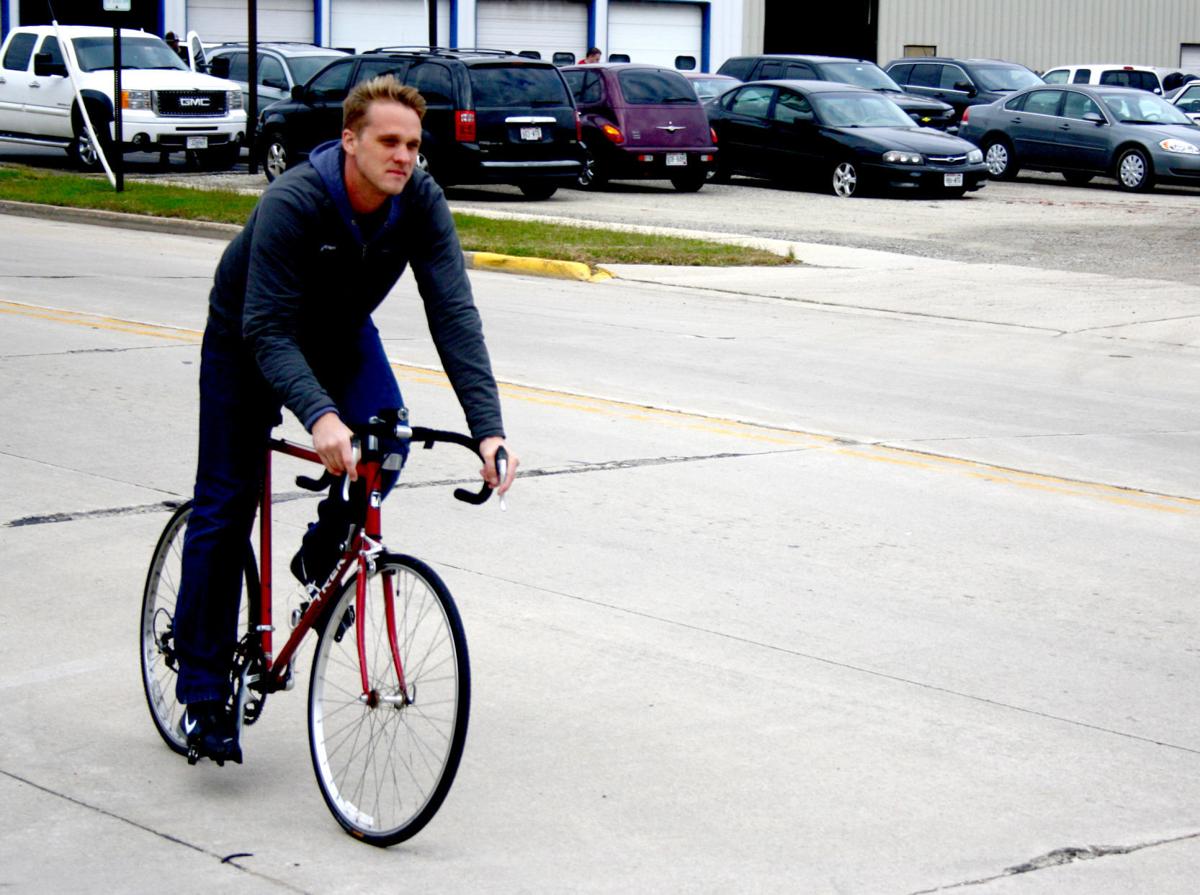 Cris Olson rides his bike down Center Street in Beaver Dam. The city is beginning to look at how to improve paths for biks in the city and how to connect to the Gold Star Memorial Trail. 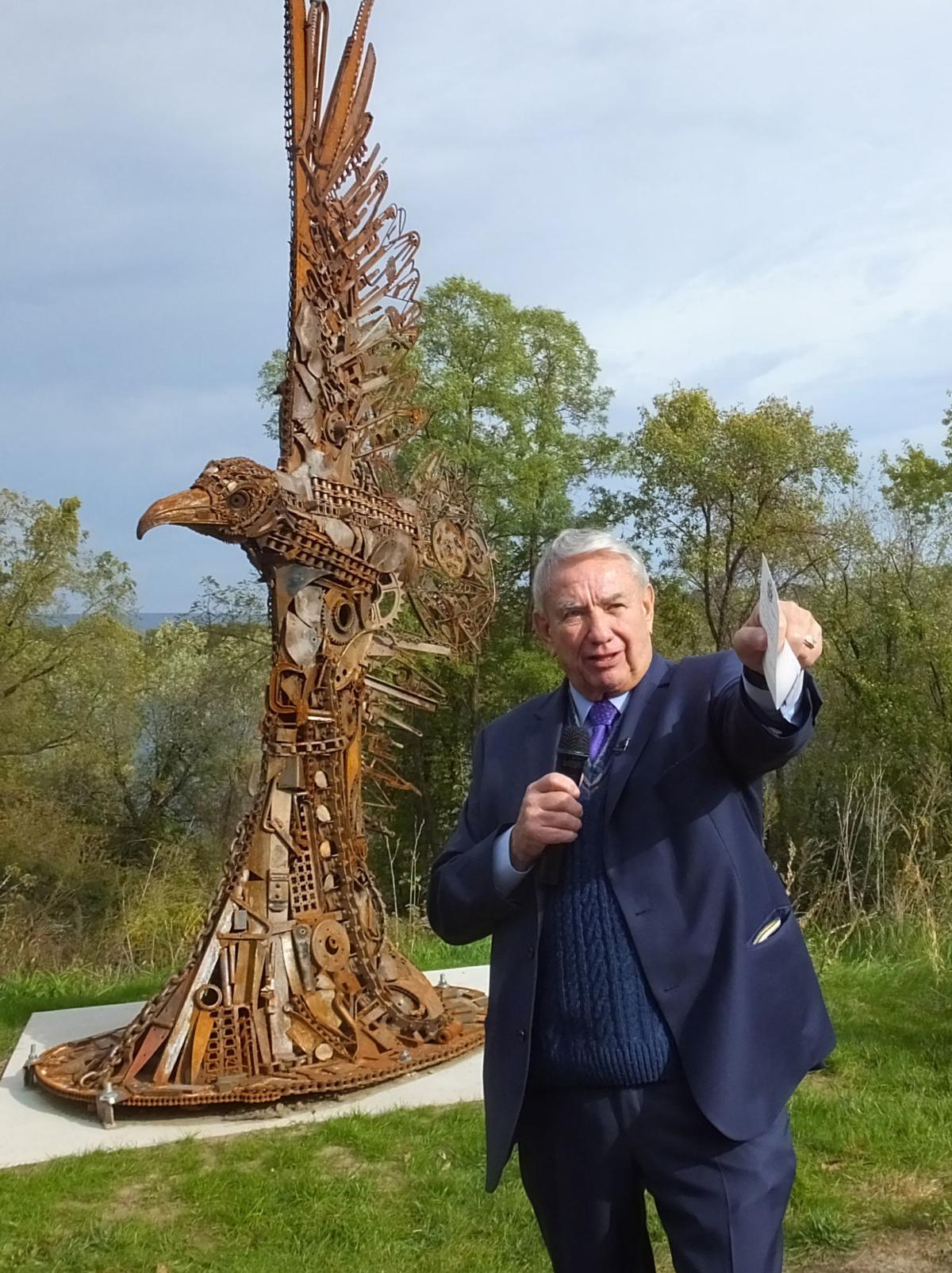 Former Wisconsin Governor Tommy Thompson praises the Great Sauk State Trail project and the potential for a trail bridge over the Wisconsin River. 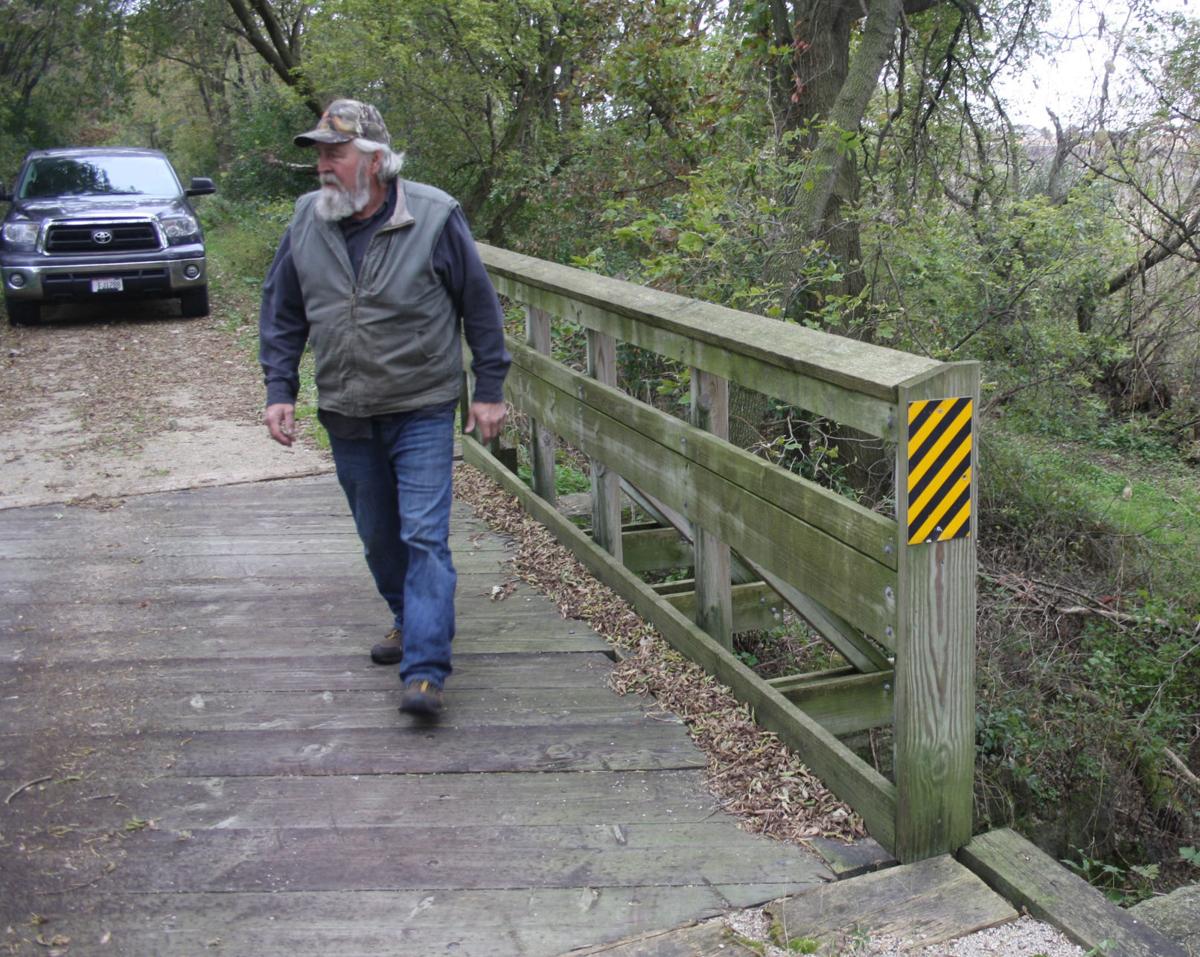 Joe Schaefer walks over a bridge on the Wild Goose Trail that crosses over a horse riding path. Trails out in the county are used for more than just bicycles, whether horses or snowshoes.

“My parents didn’t have to drive me there,” he said. “I was able to get there by myself.”

About 10 years ago, the facility moved to a business park on the far north end of the community, more than three miles away from the old site and across a state highway.

Olson’s family has made biking a priority to get around town, and he gets concerned when he sees children in the traffic-heavy where the new YMCA is located adjacent to two manufacturing plants and near offices and big box stores.

He’s begun to push for the idea of shared streets in Beaver Dam.

But officials see a need to provide more than just city streets for community connections, they want to provide bicycle trails for recreation and even commuting.

The Portage Chamber of Commerce promotes bike loops in Columbia County. Marianne Hanson, the executive director, was involved with a group that helped create 14 loops throughout the county. The chamber promotes the loops, which were created to connect communities and attractions, as a tourism tool with physical maps and an online presence.

“We’re really trying to drive traffic here with people who visit the community,” Hanson said, adding that she has traveled all the loops and biked some of them. “Of course bicycling is a big tourist attraction. People want to be healthier, they want to be in healthy communities. They want to be outside.”

No study has been conducted on how many people use the loops, which have been around for about five years. The county’s highway department has set up signage to designate the loops.

Marty Krueger, the chairman of the Greak Sauk Trail Commission, has announced a proposal to connect the newly built trail in Sauk County to Dane County with a bridge for bicycles and pedestrians, with Sauk and Dane counties each kicking in $40,000 to fund a feasibility study.

At a Great Sauk Trail celebration event Oct. 19, former Gov. Tommy Thompson said, “I want a state trail all the way from Milwaukee to Superior, from La Crosse to Green Bay and all those communities. I want Wisconsin to be the bicycle capital of America.”

Officials have also been looking at how to get the United States Bicycle Route System’s highway-based national Route 30 from La Crosse to Milwaukee, including a signed jaunt through Baraboo.

Meanwhile, Reedsburg officials are trying to extend the trail to that community. Reedsburg already has the 400 State Trail to Elroy, which connects to the Elroy-Sparta Trail, which in turn connects to the La Crosse River Trail. With the Great Sauk Trail connection, a rider could get from Madison to the Mississippi River without ever hitting a highway.

Reedsburg also has begun designating bicycle routes through and in the city.

Its not just city and county officials who see an advantage for building bike trails.

Leslie Covell Hershberger, community program manager for Blue Zones of Dodge County, said her organization has been working with Horicon, Juneau and Beaver Dam to put together bike plans for those communities.

Blue Zones is an organization that works to promote policies related to well-being in communities by working with schools, governments, businesses and more.

In Juneau, the plan included working with school, city, public works and safety officials along with surveying parents. One of the issues there is how to get kids to school safely, as many students have to cross a major thoroughfare on their way.

Dodge County accepted a 68-page bikes plan in 2003 that has yet to be fully realized.

She said her organization would work to keep bikes at the forefront, even if plans are rolled out in stages.

“It’s to have a city that’s attractive to people so they want to come here and play and live and work,” Covell Hershberger said. “The more amenities that you have like that as a community or a county, that’s not only good for people’s health, it’s also good for economic health.”

In Portage, a group of residents took it upon themselves to promote cycling in the community. The Portage Pedalers started over 25 years ago to set up long-term bikes rides from the city out into the country, according to member Pat Cook.

The group will use Columbia County bike routes, half on trails and half not. Their season lasts from about May 1 to Oct. 1, with rides of about 12-16 miles during the week and 25-35 miles on weekends.

“I think it’s good to know more about the community you live in and it’s a good way to foster that,” she said. “These are tourist dollars that you want to come to your town and your area.”

Cook said the rides will try to hit places of interest, whether a chicken barbecue or Sassy Cow. For the latter, she’ll be sure to bring a cooler along.

She said the main thing Portage needs to do to improve for cyclists is expand trails and educate about safety, including in the schools, to promote helmet use and the rules of the road.

Olson and other city leaders have begun looking at possible bike routes through the city, and some already have been marked with icons on the street, even if there is not a dedicated path.

“We’re going to be a community where the idea is when you’re driving your car be ready for a bike to be there,” Olson said.

Olson said he is working to form a committee to establish more bicycle routes and help fund an extension of the Gold Star Trail, which already stretches from Mayville to Horicon. The next step is figuring out how to get the recreational trail to Beaver Dam.

Jason Roy and Joe Schaefer with the Dodge County Parks Department were recently out on some of the trails when they spoke to a woman who traveled from Milwaukee to ride the Glacial River Trail for hiking and biking in Dodge County, which uses some paved roads before hitting its own dedicated path along Highway 26 on the way to Watertown.

She said she has tried the prominent Wild Goose Trail to Fond du Lac before, but didn’t like it as much with her bike, because it only has a limestone base instead of smoother pavement. Roy, the parks supervisor, said he’d keep it that way for the ambiance.

The Wild Goose Trail follows an old rail line and has to work for not just bicyclists, but also solo walkers, dog walkers, horseback riders, snowshoers and snowmobilers, according to Roy. Planners hope to eventually have the Gold Star Trail cross the Wild Goose, which is a state trail managed by the counties.

Olson said there is a feasibility study going on to figure out how to connect the Gold Star Trail with Beaver Dam, whether on old rail infrastructure or along a county highway. It currently connects Mayville to Horicon on a paved path along Highway 28, past the Horicon Marsh.

In cities, routes won’t necessarily have their own paths, but instead follow existing roads.

“If we can get connected to the Horicon Trail, we have the accessibility to Mayville, Watertown, Fond du Lac, Waupun, all through bike on a nice network of trails that people are always on trails the entire time,” he said.

In a time of partisan division, state legislators are making a rare bipartisan push to ensure Wisconsin children learn the loops and strokes t…

Dan Urban, of Reedsburg, rides his bike on the 400 State Trail in this June 8, Capital Newspapers Archive photo.

Cris Olson rides his bike down Center Street in Beaver Dam. The city is beginning to look at how to improve paths for biks in the city and how to connect to the Gold Star Memorial Trail.

Former Wisconsin Governor Tommy Thompson praises the Great Sauk State Trail project and the potential for a trail bridge over the Wisconsin River.

Joe Schaefer walks over a bridge on the Wild Goose Trail that crosses over a horse riding path. Trails out in the county are used for more than just bicycles, whether horses or snowshoes.