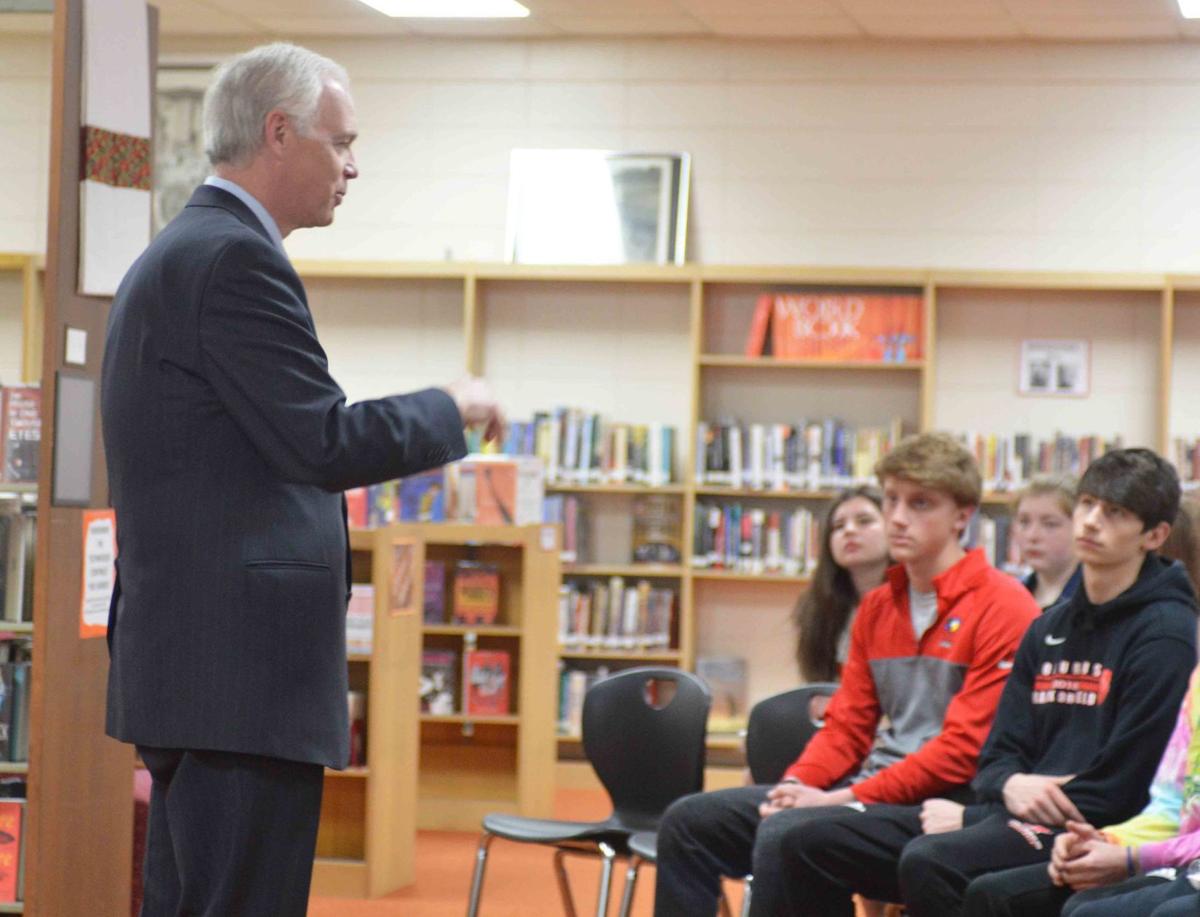 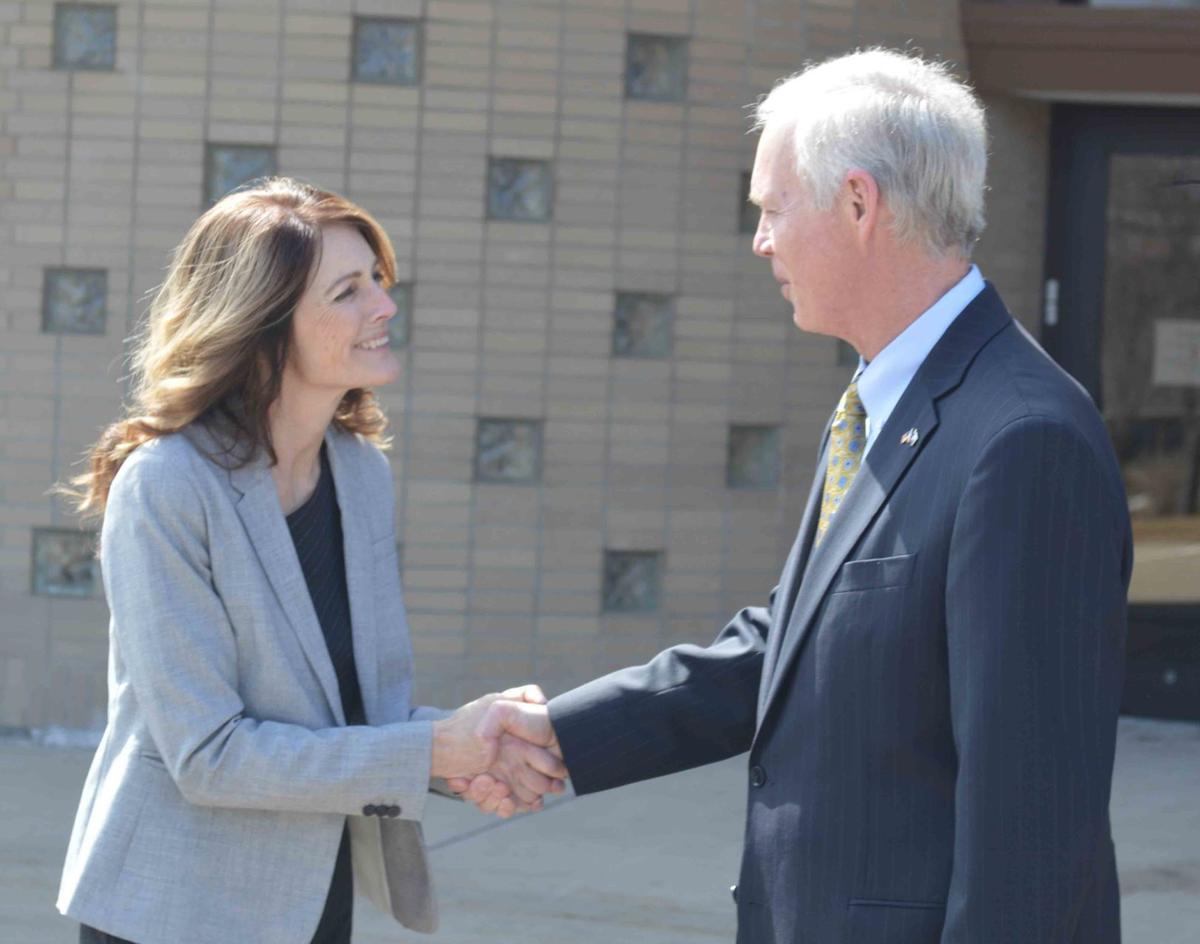 Johnson, a second-term Republican from Oshkosh, talked about all of those topics and several others with a group of students Friday at Columbus High School. Johnson and his aides swung through parts of southern Wisconsin to meet with constituents and tape a couple of television interviews in Madison. The senator met with the students, along with Columbus School District staff, school board members and city officials, for more than an hour.

Johnson fielded many thought- provoking questions from students and a few weren’t afraid to press him on controversial topics concerning the environment, immigration and gun control.

“The quality of the questions were very high,” Johnson said. “I find it energizing. The main thing is it gives me hope to come to high schools and hear intelligent kids ask intelligent questions.”

After discussing topics with the group, Johnson encouraged the students to think freely and critically about important issues facing their lives.

“I’m not asking you to agree with anything I said, but if I got you to think, that was my primary purpose,” Johnson said. “Don’t accept anything at face value; think for yourselves. If I’ve succeeded in getting you to think about these things, it’s been a well-spent hour.”

Columbus students got to see Johnson’s candid sense of humor, but also his stance on many issues facing the nation.

“You’ll notice some of my answers are somewhat provocative; I’m giving them a different viewpoint than what they’re normally hearing,” Johnson said. “I want them thinking. We don’t do enough of that anymore in this country, there’s too much group think. Everyone goes in their own corner and there isn’t enough thinking for yourself.”

One key issue that’s facing millions of Americans and will impact many of the students who met with Johnson is the rising cost of college education. Many students become saddled with large amounts of student loan debt after graduation. According to Johnson, U.S. students are $1.5 trillion in debt under the weight of student loans.

“I think we’ve done a massive disservice to young people by telling them, first of all, ‘Hey, you have to get a four-year degree,’” Johnson said. “What it communicates is completely wrong. All work has value. There are great jobs and careers right out of high school.”

In the Senate, Johnson has worked on an initiative called Next Step After High School. The program helps provide students and parents with information on several options after graduation, including two-year and four-year colleges, military service and entering the workforce.

“My suggestion is to try not to get into debt,” Johnson said. “I worked full-time when I went to college. I took every independent study course, night course that I could. I left (college) with $7,000 in the bank. Now, back then college hadn’t skyrocketed to the unreasonable cost it is now and it was easier to do, but you can still do it.”

Students posed a few questions about climate change. Johnson said it’s an “overblown problem” and believes the U.S. is doing reasonably well at addressing environmental concerns. The senator doesn’t think the country should take drastic steps to improve the climate, but could upgrade recycling programs.

While Johnson differs with President Donald Trump on some issues, he stands with him on increasing border security and tougher trade restrictions with China. Johnson called China one of the “world’s top rule breakers” on fair foreign trade.

Johnson was also asked about gun control. He’s a staunch supporter of Second Amendment rights, emphasizing it was important to the nation’s founding fathers that U.S. citizens had the right to bear arms. One of the students noted guns and ammunition have changed drastically from the weapons used in the 1700s.

“Australia and Japan took away gun rights and gun violence in those countries went way down,” one student said.

“Those are different cultures,” Johnson said. “I support our rights to have guns and defend ourselves.”

In dealing with the opioid crisis, Johnson said China has agreed to limit the production of fentanyl, a chemical used to lace heroin. Johnson also stressed to students the dangers of vaping and how it can be highly addictive.

“We’ve been very effective in reducing the use of tobacco in our society, but that took a multi-decade public relations and education program,” Johnson said. “We need to do the same thing with drugs.”

Johnson was also asked about support for art and music classes in public schools. Some schools have cut back on such programs, but Johnson thinks art and music are vital to a well-rounded education.

“I like music,” Johnson said. “I listen to just about everything. Well, except for maybe rap.”