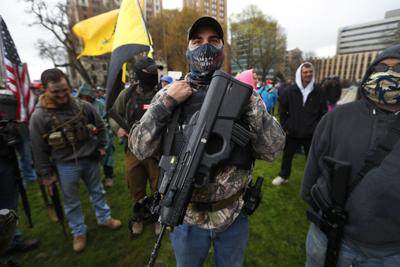 We get it. Tensions are running high right now. And many Michiganians are fearful for their jobs and their liberty in the wake of extensive government lockdown measures. These are real and valid concerns during this unprecedented pandemic.

Yet we caution against citizens taking their frustration too far.

A Lansing protest at the end of April where armed demonstrators entered the Michigan Capitol with the clear intention of intimidating lawmakers and Gov. Gretchen Whitmer clearly wasn’t helpful, nor did it help further their cause.

Another protest was planned recently, along with a counter-protest.

Rhetoric has also grown more heated. For instance, Whitmer has received a number of violent threats against her on social media, and she called on Republican leadership Monday to condemn these words.

As Chatfield wrote on Twitter: “I disagree with many of the governor’s decisions. I’ve been very open about that. I also support the right to protest. But as I’ve said before, those making physical threats (to both parties) are out of line and should be punished. It’s despicable. It’s wrong. It needs to stop.”

In a speech in the Senate, Shirkey said: “These folks are thugs and their tactics are despicable. It is never OK to threaten the safety or life of another person, elected or otherwise, period. The moment an individual or group embraces the threat of physical violence to make a point is the moment I stop listening.”

But the GOP leaders also believe that the majority of protesters do not share violent sentiments, and blame a few bad actors for drawing attention away from justifiable objections to stay-home orders that have left businesses shuttered and thousands unemployed. Many businesses aren’t coming back, even once the orders lift.

The First Amendment is one of the bedrocks of our democracy, and so is the right to protest. A wide swath of free speech is protected, even speech that seems threatening and disturbing.

But that doesn’t mean it’s right.

In a post to the private Facebook group Michiganders Against Excessive Quarantine, one member wrote: “We haven’t had any bloodshed yet, but the populous is counting to three, and the other day was two. Next comes watering the tree of liberty with the blood of tyrants.”

It’s posts like this that led to Facebook taking down the site Wednesday. More than 380,000 members had joined it in a matter of weeks, and it’s unlikely the majority would defend such words.

Our country was already dealing with a civility crisis before the virus hit, and political divides now seem deeper than ever. But we hope that as protests continue, citizens avoid violence and threats. Otherwise, any valid message protesters are bringing will be lost.

EDITORIAL: American leadership is as indispensable today as it was for victory in Europe 75 years ago

We need to learn the lessons of history, and remember the price of freedom

EDITORIAL: Legislators need to help the unemployed, not point fingers

There are many people in Wisconsin who were put out of work through no fault of their own by the COVID-19 pandemic. As we’ve reported, there a…

OUR VIEW: Public health during a pandemic is too important for political games

The COVID-19 pandemic has set loose winds of change at universities and colleges across the country, and it could reshape the face of higher e…

OUR VIEW: Knowing where COVID-19 cases and deaths occur will better protect nursing home residents, workers, loved ones and the general public