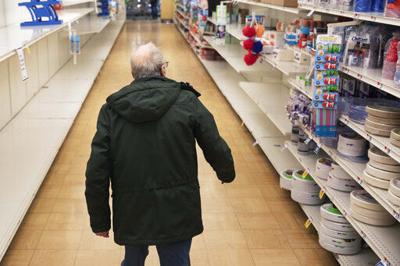 It’s hard to believe, but in just a week, normal life in the United States has largely ground to a halt. Businesses deemed nonessential by the government are closed or closing. Classrooms sit empty. Streets are eerily quiet and freeways unimaginably clear. Residents of several states are now under orders to remain in their home for the coming weeks — at least — in an extraordinary attempt to slow the relentless march of the COVID-19 pandemic.

These are hard and scary times, and they may get harder and scarier before the closures and stay-at-home orders issued by various officials are lifted. And not surprisingly, some are wondering if this is all worth it. Does it really make sense to shut down the economy almost entirely over COVID-19? Are we unnecessarily upending our lives and our livelihoods for an outbreak that is at this point mostly theoretical and largely someone else’s problem? Must we really hide in our homes, or is the danger being hyped?

The answer is that it is not being hyped. Coronavirus is a problem for everyone. Not just for people over 65 (who, so far, have made up the majority of deaths worldwide). And not just for people with chronic conditions or compromised immune systems who are at higher risk for serious illness. In fact, all adults are at some risk. (Happily, young children continue to be spared the worst of the infection.) As it turns out, about 40% of the people hospitalized with COVID-19 infections in the U.S. are non-boomers between the ages of 20 and 54, and since most of them are still sick, we can’t say for sure how they will fare in the long-term.

Some people have irresponsibly asserted that COVID-19 is no big deal, that sick people should stay home, but the rest of us should just wash our hands and go about our normal lives. After all, they argue, seasonal flu outbreaks kill tens of thousands of people every year, and only about 10,000 people across the globe have died from COVID-19 so far. Some number of deaths, they quietly argue, is tolerable.

Even if you don’t find that argument heartless, you should recognize that it’s based on a faulty premise: that deaths will remain at a tolerable level. Risk-benefit analyses don’t work when you can’t calculate the variables. This is not the flu, a virus for which we have a vaccine and decades of research to guide our assumptions. Rather, we are in early stages of an outbreak of a brand-new virus that was identified less than three months ago and about which we know very little for certain, other than it is highly efficient at spreading through the population undetected.

For instance, we still don’t know the true mortality rate. It could be 1%, which would still make it much deadlier than the average seasonal flu, or as high as 3.4%, which would make it as deadly as the 1918 Spanish flu, which killed as many as 100 million people at a time when the world’s population was just 1.8 billion. Currently, nearly 8 billion people are on the planet. The math is chilling.

Nor do we know how many people are infected today or how many will be infected in the next two months. The shameful shortage of diagnostic tests in the U.S. for the coronavirus has made it hard for public health officials to gauge the scope of infections, but they suspect it is many times higher than the number of reported cases.

California Gov. Gavin Newsom said in a letter to President Donald Trump on Wednesday that the state projects as many as 25.5 million Californians, or 56% of the state’s population, could be infected in the next eight weeks in the absence of stringent mitigation efforts. ...

We also don’t know if the virus’ spread will wane with warmer temperatures, as many other respiratory illnesses do. It may not — COVID-19 infections are increasingly turning up in equatorial countries and in the Southern Hemisphere, where summer is just now giving way to fall.

Also, there are still some questions about how the virus is transmitted. Typically, respiratory viruses are spread by sick people coughing and sneezing droplets that are either inhaled by someone close by or deposited on items that other people touch later. Preliminary research into the novel coronavirus has also detected the virus in fecal matter (though it’s not clear if that’s a viable source of transmission) and has found the virus can remain in the air for up to three hours and on hard surfaces for days. These studies aren’t definitive, but they underscore that we are still gathering crucial information about how this virus acts.

Even those who believe they are safe from the outbreak because of their age or situation ought to be sobered by the implications of an uncontrolled spread of the virus. About 20% of people with diagnosed COVID-19 infections are hospitalized. A surge in infections could overwhelm the health care system’s capacity, limiting care and hospital beds available for people of all ages who may have been injured in car crashes, suffered heart attacks or contracted other deadly diseases.

Social distancing and home isolation are the best tools we have at the moment to slow or even stop transmission, while we continue to search for vaccines, treatments and the resources to keep our health care system working. That’s what we are learning from China’s early experience managing the outbreak. The country quickly instituted strict quarantine rules for millions of people, and on Friday, Chinese officials reported for the second day in a row that they’d gone without any new cases of locally transmitted COVID-19.

That’s extremely good news if it holds and should give Americans some hope and fortitude through the next few weeks. We all need to remember this: The future course of this disease — whether we will face a staggering number of untimely deaths or whether we will successfully flatten the curve and slow the infections — depends not only on the behavior of our political leaders, doctors and nurses, but on the choices we ourselves make about our behavior in coming days and weeks.

The nation seems to have two Donald Trumps now: One is the calm, focused president who emerged last week to finally begin taking the coronavir…

EDITORIAL: Hey, anti-vaxxers, are you ready to get your shots yet?