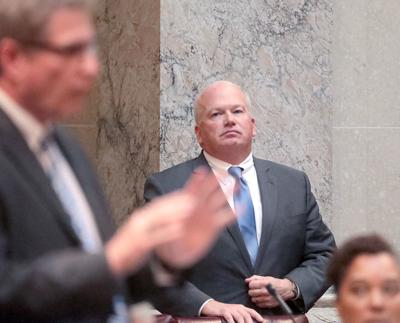 The Republican-run state Senate on Tuesday finally approved one of eight bills to help the homeless in Wisconsin.

But seven more proposals still demand action, with time running out before the Legislature adjourns for the year.

This shouldn’t be so hard. Bipartisan support is strong enough for all of the bills to easily pass — if only Senate Majority Leader Scott Fitzgerald, R-Juneau, would allow votes. In fact, the Republican-run Assembly passed all of the homeless bills long ago. And it was former Lt. Gov. Rebecca Kleefisch, touted as a leading GOP candidate for governor in 2022, who was key to developing the package.

So what’s the holdup?

No senators spoke directly against the bills Tuesday during lengthy debate on Assembly Bill 119, which eventually passed unanimously. Even Sen. Dale Kooyenga, R-Brookfield, who stressed the obvious — that the proposals won’t solve every aspect of homelessness — acknowledged the bills will help and that he supports most of them.

“I ask that we talk about the root of the problem and not just money,” Kooyenga said, ignoring that virtually all of Tuesday’s discussion was about just that. Senators across the political spectrum spoke about difficult lives falling apart in their districts because of health problems, addictions, high rent and unemployment.

OUR VIEW: Thousands of desperate people need a hand up with winter arriving early

AB 119 will steer $500,000 more annually to homeless shelters for additional beds. The other bills — which Senate Republicans refused to take up Tuesday, rejecting pleas from Democrats — would help desperate people find and keep stable housing, help the homeless develop skills for employment, and assist landlords with repairs to low-cost housing.

Several million dollars is already included in the state budget to pay for the proposals, and that’s far less than what cold-winter states such as Minnesota commit to the problem. Nonetheless, Sen. Steve Nass, R-Whitewater, needlessly complicated AB 119 Tuesday by pushing to change its funding source, which we hope won’t delay help further.

A number of bills to combat homelessness passed the Assembly with broad bipartisan support. Unfortunately, the measures were never voted on in…

Senate Minority Leader Jennifer Shilling, D-La Crosse, told her colleagues that temperatures were in the single digits when she left western Wisconsin for Madison on Tuesday morning. Single mothers with children, veterans with health issues and others make up the tens of thousands of people who lack housing across the state.

“I just think of kind of the cruelty of not addressing and helping just with the dignity of human life here in this state — that we don’t do more, and that there’s not a sense of urgency to do it in a timely fashion that is compassionate,” Shilling said.

The governor should quickly sign AB 119. Then the Senate should rethink its stubborn delay and adopt all of these reasonable and righteous bills.

Sen. Scott Fitzgerald is still stalling help for the homeless

A very bad week for the Senate GOP