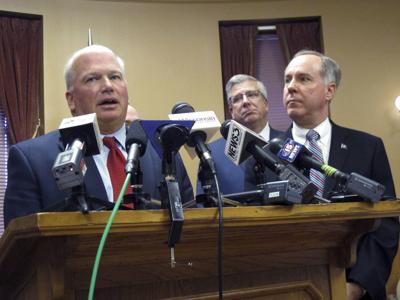 Senate Majority Leader Scott Fitzgerald, R-Juneau, says “the support is not there” for universal background checks on gun sales in Wisconsin.

The Marquette Law School poll recently asked voters across the state about expanding the checks to all firearm sales. The poll found support for consistent checks among:

That’s a lot of support among people the GOP will be courting in the next election. In fact, it’s overwhelming. And it should convince the Republican-controlled Senate to consider universal background checks in a serious way Thursday, when Gov. Tony Evers has ordered a special session to debate it.

Instead, Fitzgerald plans to ignore the governor’s and public’s desire to close dangerous loopholes in Wisconsin’s gun laws. Currently, if you buy a firearm from a licensed dealer, the seller must run a background check through the state Department of Justice or FBI to make sure you can legally own a gun. Hundreds of potential buyers fail this test every year, and those sales are canceled.

But criminals can get around the law by buying firearms at gun shows or online, where background checks aren’t required.

Despite sweeping public support for consistent checks, Fitzgerald plans to adjourn the special session Thursday immediately after calling it to order.

A bill closing the gun show and internet loopholes won’t even get a cursory debate.

That’s cowardly and runs against the wishes of the vast majority of the public.

Opponents of universal background checks worry that a responsible gun owner won’t be able to give a hunting rifle to a family member without running a check. But the bill endorsed by the Democratic governor allows an exception for transfers by gift or inheritance.

It also exempts some sales and transfers involving firearms dealers, law enforcement and the military.

But they will prevent and discourage some. The man who fatally shot three women at a Brookfield spa in 2012, for example, purchased a .40-caliber semiautomatic pistol from an online seller the day before his rampage.

The online seller didn’t have to legally check the shooter’s record. If the seller had, a lengthy restraining order would have prevented the sale.

If Fitzgerald, who is running for Congress, doesn’t want to lead on this issue, he should at least follow the will of voters. Fitzgerald should allow an honest debate — and a vote — Thursday on this popular and common-sense safeguard.

The coronavirus pandemic is deadly serious, and it's everyone’s problem moving forward

EDITORIAL: Trump's implacable ego gets in the way of fighting an implacable foe

America’s wartime president, Donald Trump, appears to have a 15-day attention span when it comes to combating the coronavirus pandemic. Weary …

EDITORIAL: Hey, anti-vaxxers, are you ready to get your shots yet?

Don't wait. Get your absentee ballot now to vote April 7